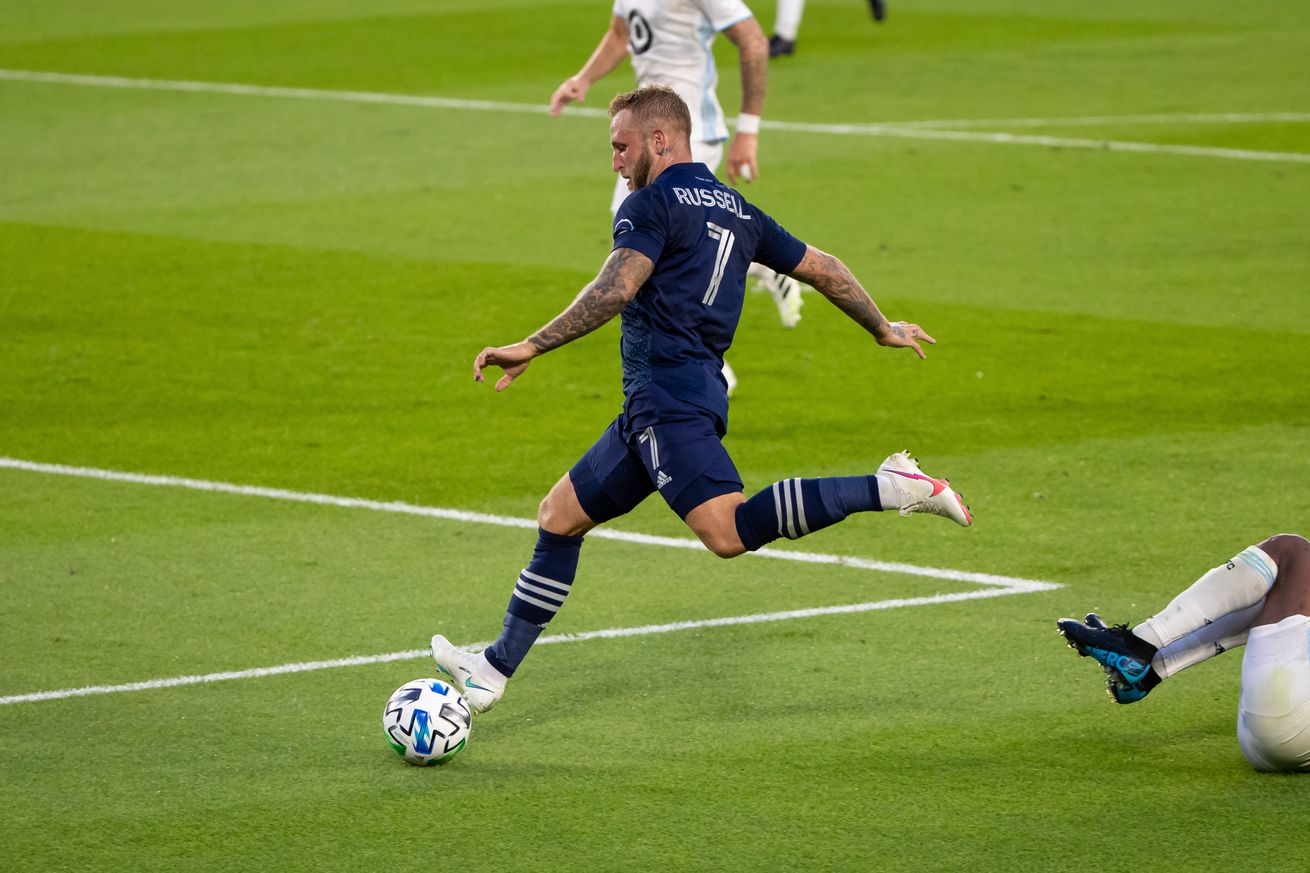 Finally full rest. But injuries… so what is the best eleven?

Sporting Kansas City enters Sunday finally getting a full week of rest for the first time since being knocked out of the MLS is Back Tournament. They welcome “rival” (but not really) Minnesota United to town in a battle for second place (thanks Seattle). There is more on the game in our preview but let’s get to the lineup predictions.

Honestly, this could 100% be the lineup… if it wasn’t for injuries. Our own Thad Bell is reporting that Roger Espinoza, Alan Pulido and Ilie Sanchez will likely not be available this Sunday.

Vermes: Espinoza, Pulido, and Ilie will all probably NOT be available this weekend #sportingkc

Espinoza doesn’t surprise me too much based on his age and all the games he played in a row before picking up the injury. Though he, along with Pulido, were listed as just being day-to-day not that long ago. At one point Peter Vermes described Espinoza as having left the game due to cramping, which is obviously a hell of a cramp to still be going on weeks later.

As for Pulido, he had a “knock” which is another vague term. A knock could mean a player won’t miss a game and just miss some practice (obviously not the case this time with now potentially a third straight miss). In some cases “a knock” turns out to be a severe injury (like Felipe Gutierrez or Jimmy Medranda) that was just not initially diagnosed. Let’s hope we see Pulido soon. Sorry that it got dark there for a second.

Espinoza seems to have an obvious replacement in Felipe Hernandez. He hasn’t played out of his mind like he did when subbing on against Real Salt Lake in MLS is Back but he’s been solid across his two starts, six appearances and 303 minutes in 2020.

Ilie has been replaced by Gianluca Busio and even if Ilie was back from whatever family issues are keeping him away, I’m not convinced he would displace Busio from the starting lineup.

Who Starts at Center Forward?

So far we’ve seen both Khiry Shelton and Erik Hurtado get a start at CF. With another five days off until SKC play again, no reason you don’t go with your lead option: Shelton. However, there is a case to be made Shelton is the best winger on the team too and you’d be removing him from that role. I say start Shelton with whatever wingers (more below) and then when you sub off a winger (or two), bring on Hurtado at striker and move Shelton out wide.

With No Shelton on the Wing, Who Starts?

Pencil in Johnny Russell of course. He’s one of the team’s highest paid players and even though he hasn’t been as good this year as in 2018 and 2019, he’s still top quality.

As for the other side of the pitch, I really love Gerso Fernandes off the bench. I think having him press against tired legs is a huge asset. Combine that with the fact that Daniel Salloi is at his best with Shelton at striker, and I think you give the Hungarian a chance. Hear me out! If he’s not doing well, bring him off at the half. But in 2018, he scored all 11 goals with Khiry on the field with him. There is something to the space that Khiry opens up as Salloi isn’t going to beat anyone with speed but he just needs an inch to hit a good ball. I know he’s capable and Pulido’s injury could open up a chance for him to see the field.

Side note: you just know somehow it’ll be Zusi at winger, right? As much as I’m for Lindsey playing a ton more right back, I really don’t want Zusi on the wing. I’m open to him in the midfield though.

I could absolutely see the defenders who started against Minnesota last time, starting together this time. I like Winston Reid on full rest. Graham Smith has low key been solid this year. In his four starts the team is 2-0-2 and they’ve allowed a combined four goals (*knockout round MLS is Back games don’t show on the regular season record).

Graham Zusi has been the de facto starting right back for years (outside of the last two games). And Jaylin Lindsey has started on defense for five straight games (twice at RB, three times at LB). I think he’s shown he is far better on the right than the left, but I wouldn’t put it past PV to play him at LB as Luis Martins and Amadou Dia didn’t exactly play marvelously in their two recent starts.

However, I’m going a different way. I’ll predict that Peter sticks with Zusi at RB (though Lindsey really deserves a chance to be the “starter”). And I’ll say Luis Martins returns at LB now that he’s had extra time to get fit. He had a blunder that led to the goal against the Colorado Rapids, but he was pretty dang good the rest of that game.

I won’t even hate it if this is the lineup on defense rolled out the following weekend against FC Dallas on Saturday with five days rest. But from that point on (assuming schedule congestion continues — since we only know the next four opponents) there has to be rotation and I’ll advocate for something I’ve said in the comments on this site and on Twitter.

This team needs two “sets” of defenders. That way they can build chemistry together by consistently playing with one another (so hopefully they all do the offside trap together better) and they are never so tired they can’t sprint back on defense as needed. Also, it’s not like any of the defenders have been world class lately, so I think fresh legs and chemistry are more valuable than playing your “stars.” I’d go with something like this (R-L):

It doesn’t have to be those exact combinations, but the premise stands. The defense has been broken and unless PV is going to stop bombing both fullbacks forward, something has to change. I think this is worth a shot.

*MLS has reduced game day rosters to 20 players, so no more carrying an entire team of backups and then some on the bench.

I’m going to stick with the format I did last time out. This way you can see more of who voted for what by position (otherwise, some of the vote gets divided and it’s not clear). Of course you guys don’t have the same lineup for me because I had the news of Espinoza, Pulido and Ilie being out and you didn’t.

We also had yet another tie, though this one is a little weirder as the fourth defender was split between Martins and Reid but it needed to be a CB based on the rest of the voting. The defense voting on the whole is really tight. I thought I’d throw in every single vote this week so you can even see Andreu Fontas getting a tiny bit of love.

What do you think? Did we get the lineup right? If you voted for a unique formation, tell us in the comments (or go to BuildLineup.com or a similar site and show us). What is your ideal Starting XI? Let’s talk about it!