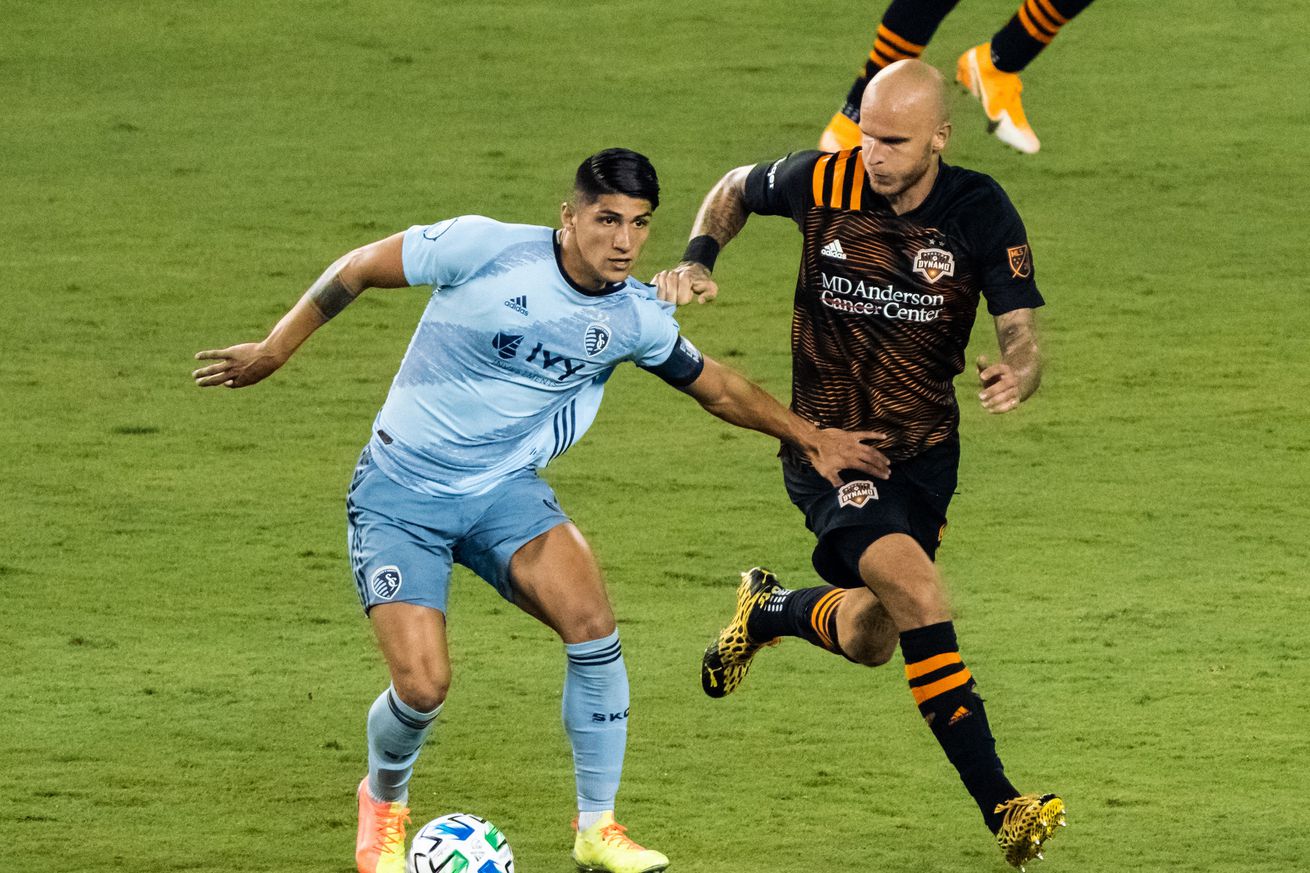 Sporting Kansas City will finally get a bit of a rest… after the game against the Houston Dynamo. In fact, this is the shortest rest of 2020 so far with a mere two days off between games and a fifth game in just 16 days. With seven days off before the Minnesota United game, it would seem Vermes can go for it, but at the same time he has to account for the short rest leading into this game.

Let’s try something a little different on these predictions. Since it’s been a mere 12 days since Sporting KC last played Houston, let’s start by looking at the lineup that got thumped by a score of 2-5.

On the surface it doesn’t look too bad. Khiry Shelton’s defense from the forward position was obviously missed and despite him playing two days ago for the full 90, I suspect he’ll be back on the wing. The midfield looks like the best available three players at this point (though that was their third straight start in nine days at that time). The CB pairing looked weak from the get go, both because Winston Reid was also on his third start in nine days, and because he and Matt Besler are too slow to be paired together in my opinion. Finally, Jaylin Lindsey was playing out of position at LB.

So what get’s changed?

If Shelton is going to start, someone has to go to the bench. It may have to be Johnny Russell who inexplicably played all 90 minutes against FC Dallas despite being out of gas from at least the 80th minute on. He gutted it out, but with just two days off, it might be a lot to ask him to start again.

Also, Gerso has started three straight games (though he’s come off early each time). I think the team is really missing something not having him as an option off the bench to stretch tired defenses. It doesn’t feel like a coincidence that the team is 0-1-2 over this stretch. And finally, while Daniel Salloi showed a couple moments against Houston, his defense is too lacking and he isn’t adding much going forward. I won’t be stunned if he starts, but I’ll go with Alan Pulido, Khiry Shelton and Johnny Russell to start.

Let’s just hope Pulido is actually healthy, as Thad pointed out, that apparently is up in the air.

Ilie Sanchez is still unavailable and Roger Espinoza is far from certain to be back in the lineup. In fact, if there is any chance Espinoza isn’t ready, I don’t see why you risk him with a seven day gap upcoming between games. Felipe Hernandez played well and can and should start again. Plus Gadi Kinda returns from suspension and there are no options at defensive midfielder other than Gianluca Busio, so that decision is made.

Change #3: Defense (Left Back and a Center Back)

I suspect Graham Zusi getting one start off won’t be a trend (though Jaylin Lindsey looked fantastic at RB). Plus Lindsey, the only other RB on the roster, has started all four games consecutively since SKC returned. He probably earns a night off and despite his blunder against Dallas Luis Martins probably runs out at LB. Then again, two days off after he missed a few weeks from injury and fitness concerns could mean he can’t go again. I’m fine with Amadou Dia getting that start next to Matt Besler.

Yes, Besler, despite getting schooled by Houston last time, looked great against Dallas and should start. Plus he and Dia and Martins have history (and hopefully chemistry). However, if Winston Reid is fully healed from whatever caused him to leave the game against the Colorado Rapids and PV wants to start him, don’t start them both. Go with Besler OR Reid.

As for the other CB, Graham Smith has played pretty well all season. Puncec has been okay as well. But when Graham Smith starts (in regular season games — let’s ignore the Philadelphia Union game where two goals came on corner kick counters) KC have not allowed more than a single goal and the team is 2-0-2. Start Smith.

*MLS has reduced game day rosters to 20 players, so no more carrying an entire team of backups and then some on the bench.

In a first, there was a tie. Roberto Puncec and Matt Besler got the exact same number of votes to be the second CB (next to Graham Smith). The other place we didn’t agree is you guys have Russell to the bench with Gerso starting (and he was gassed so that’s not unreasonable on next to no rest).

Let’s tally the votes a little different, by positional group:

What do you think? Did we get the lineup right? If you voted for a unique formation, tell us in the comments (or go to BuildLineup.com or a similar site and show us). What is your ideal Starting XI? Join us in the comments to discuss.