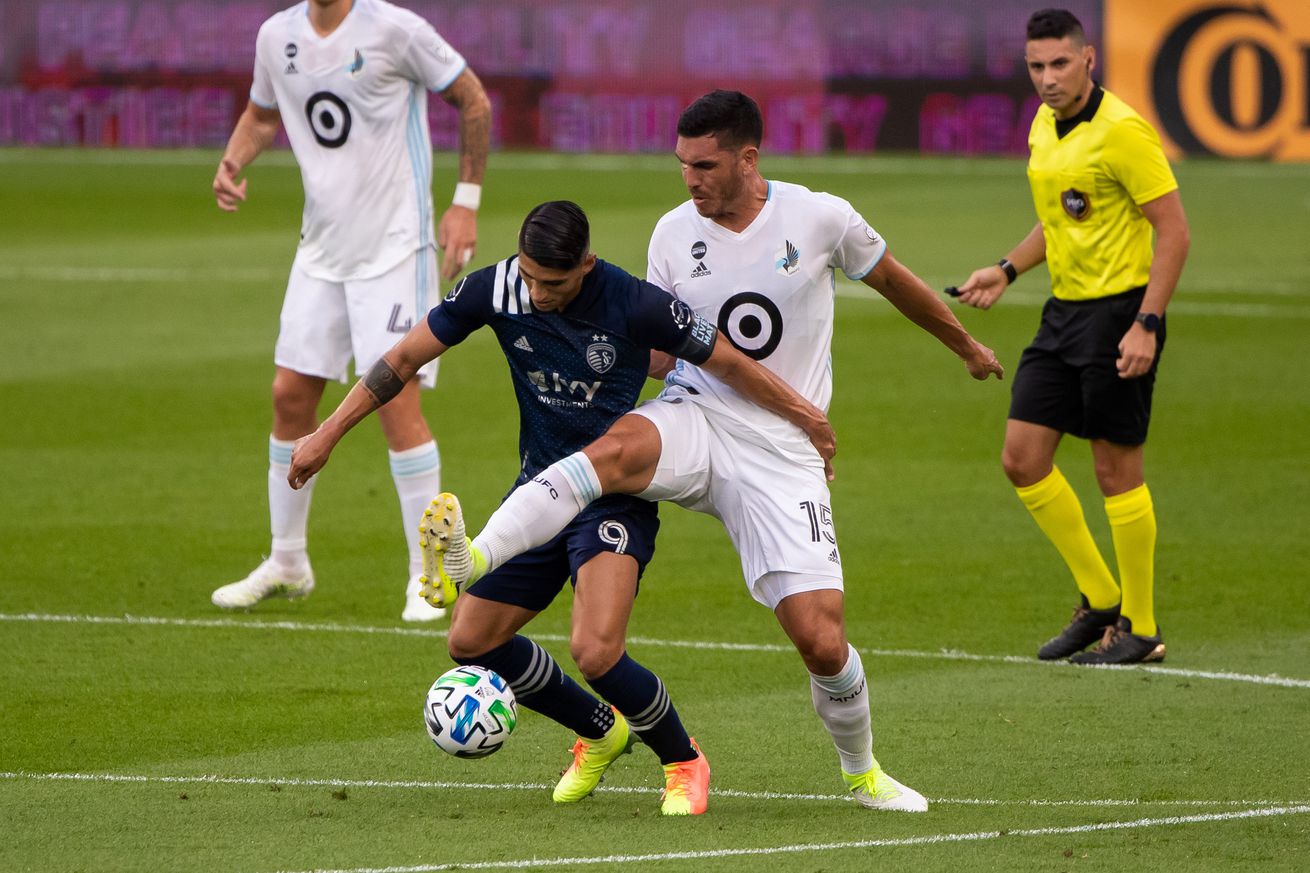 Kansas City extend their lead in the west with the win.

A Minnesota United cross turned Sporting Kansas City own goal kept a trend alive and tied the first versus second MLS Western Conference battle in the 32nd minute Friday night at United’s Allianz Field. The goal set the stage for more weird, but a change at the top as Kanas City’s persistence and drive won out.

Sporting Kansas City pushed the restart button for the third time this season Friday night versus the Loons. The match followed the season opener on February 29, the MLS is Back tourney opener on July 12, and now the first match of the remainder of the COVID-19 altered 2020 regular season.

The Sporting lineup card included a few surprises. First up was the inclusion of center back Winston Reid, appearing for the first time since his loan from England’s West Ham United. At left back, 20-year-old Jaylin Lindsey got the start, with his younger counterpart, Gianluca Busio starting at holding midfield in place of Illie Sanchez, absent due to a family emergency.

Sporting had recently fell to Minnesota United in that second restart, 2-1, a Khiry Shelton goal too little in the face of an own goal and a killing injury time winner by Loon Kevin Molino.

In this match, goalkeeper Tim Melia was called on at his left post in the third minute; the denial resulted in an innocuous Minnesota corner.

Busio was an alert and wise 6 in the early going, and Sporting moved the ball well, short of penetration, however. On the other end, Reid’s center back partner, Graham Smith, made a probable goal-saving slide to knock away a ball from the right for United’s Luis Amarilla. That center back combination meant the fourth straight match – including the playoff rounds in MLS is Back – that long-time team captain Matt Besler did not start.

But Sporting would soon find joy. Searching for a central running Roger Espinoza splitting the Loon defense inside the 18, Gadi Kinda’s cross bounced through the box and into the left corner of United goalkeeper Greg Ranjitsingh’s net for the early lead. The marker was Kinda’s third of the season after signing with Kansas City on a one-year loan from Israeli Premier League side Beitar Jerusalem.

A scare came in the 26th minute for Sporting. A dipping volley 19 yards out from the middle by Hassani Dotson off a failed clearance put Melia in full flight to knock the well-struck ball over the bar.

The scare turned premonition six minutes later. A grounded cross off the boot of Loon Ethan Finley was deflected to the near post by Lindsey, and caught Melia moving right. The ball snuck inside the post and leveled a match that Sporting had let go in the recent minutes.

The score remained when the halftime whistle blew; the stats much the same at mostly even.

Sporting’s first caution was earned by Busio early in the second half; the 18-year-old earned a yellow for a tackle from behind that set off a series of free kicks and corners for United. The last corner necessary only because of Melia’s excellent save off a Dotson header from the middle of the box.

The goals stayed weird in the 55th minute. Kinda, anticipating a midfield pass, drove at the defense from the interception with Russell coming on his left. Russell soon received and pushed past a sprawling United defender at pace before playing back for Kinda, only to see retreating back Michael Boxall solidly knock the ball into the net for a Kansas City lead.

Graham Zusi belted a shot at the United goal in the 69th minute that handcuffed Ranjitsingh, but the goalkeeper, who was in for the injured Tyler Miller, was able to block the shot with his core.

Sporting’s first substitutions would be Cameron Duke for Kinda and Gerso for Shelton in the 72nd minute. Those were followed by Felipe Hernandez for Espinoza three minutes later as Kansas City Manager Peter Vermes continued to follow through on his recent comments regarding his youth earning more time.

The 80th minute saw a United rush down the right wing and into the Sporting box by sub Robin Lod. The Fin’s low cross eked across the box untouched, even with Sporting vacant at the back post. Unfortunately, the next drama was from a collision between Lindsey and Reid and Loon attacker in Sporting’s box while attacking a cross. All was well in the end, though Lindsey remained on the pitch for a time.

The last Sporting sub was center back Roberto Puncec for winger Russell as Kansas City shored up the air defenses in minute eighty-five.

Sporting defended well and worked the danger of the counter to good effect, taking the 2-1 win back home.

And Kansas City (5-1) will be home Tuesday night, hosting Houston Dynamo in game six of the MLS regular season.