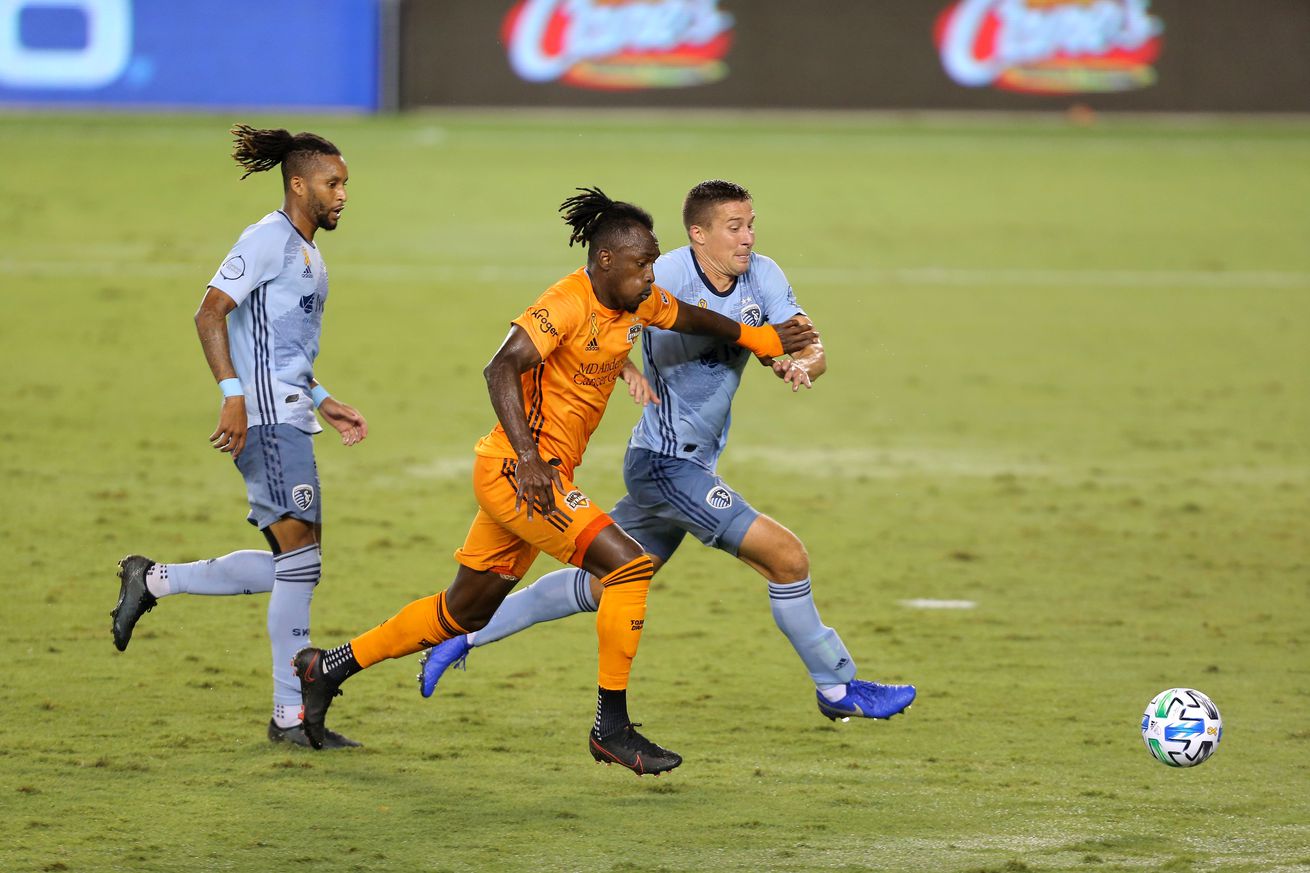 The #FireVermes crowd and just calm the hell down.

So Sporting Kansas City lost to the Houston Dynamo for the second time in a bit over a week. I personally saw it coming but if you dig into the comments on Facebook and Twitter (and of course NOT on The Blue Testament) you’ll see throngs of people calling for Peter Vermes’ job. I’m the first to criticize PV when he deserves it, and it wasn’t a perfect night, but it’s far from his fault.

The title says excuses, but let’s look into some reasons things went the way they did and let’s all just calm down a bit.

At the conclusion of Sporting’s game, they were one of three teams (along with Toronto FC and Orlando City) to have played 10 games in MLS. Playing five times in 16 days would be tough on any team. Obviously, on the whole, the performances haven’t been great but I’m not sure who expected KC to head to Houston and win.

Houston were in the same boat as Kansas City, except without the travel and they are more acclimated to the climate. Playing with just two days between games is tough on anyone and Khiry Shelton, Jaylin Lindsey, Gianluca Busio, Roberto Puncec and Tim Melia played 90 minutes in both games. It showed but there weren’t a lot of other options. Shelton was looking pretty tired at the end (here maybe is some criticism of Vermes as maybe you keep Hurtado on instead or possibly worse you sub on Daniel Salloi). Puncec maybe can’t jump high enough on the Mauro Manotas goal, which could be fatigue or just that Manotas is damn good.

Adding to all that is the weather. Houston is a tough place to play. They enjoy an extraordinary home field advantage and it has nothing to do with their fans (or lack thereof). The oppressive heat in the summertime is especially tough. Even though Houston finished 10th in the West last year they were still 10-3-4 at home. 2018 was a down year at 8-6-3 but in 2017 they were 12-1-4. Heat, short rest and a packed schedule… quite the list. There is more.

Houston were missing just Michael Salazar, whoever that is. Sporting KC on the other hand were missing four important players. Felipe Gutierrez, who is out for the year. Roger Espinoza, who is admittedly not as great as he once was but is still important, and would have allowed for more rotation. Ilie Sanchez who has missed the entire first phase of MLS’ return to play. And probably most importantly, Alan Pulido, the most expensive player in Sporting KC history. That’s 2019’s starting midfield (and 2018) and arguably the most important player on the field in Pulido. That’s tough.

Add to that Gianluca Busio and Jaylin Lindsey have played every minute since play returned and that lack of depth because of absences puts an extra toll on the team.

Houston are on a Roll

They’ve won three straight (admittedly two against SKC) and went from last to third place pending other results around the league. And they did it against good teams. Minnesota United got thumped, Sporting looked stunned in the 2-5 loss and this was a gritty 2-1 home win for the Dynamo. There is something about being in form.

Houston frankly has some of the best offensive weapons right now in all of MLS. They have three strikers that are all of quality: Mauro Manotas, Christian Ramirez and new addition Ariel Lassiter. Plus they have solid wingers in Darwin Quintero, Alberth Elis and Nico Hansen. And let’s not leave out Memo Rodriguez, a stunningly good Homegrown player.

If it’s any consolation, Manotas and Elis are constantly rumored to be sold to other leagues and that should weaken the Dynamo. It’ll be interesting if it happens soon or stretches into 2021 with all the weirdness of this year. If they stick around, Houston look like contenders. If at the end of the year they at or near the top of the table, these losses won’t seem so bad.

The pitch at BBVA Stadium was garbage. It was covered in divots and looked to be in awful shape. The balls were constantly skipping off the grass and even the players were having trouble. Erik Hurtado had one set of boots on in the first half, came out in a different pair after halftime and then switch to a third quickly after that. And he only played 62 minutes.

Sporting struggled to possess the ball and kill the clock to fit the tactics they had brought to adapt to the humidity, short rest, injuries and schedule congestion. The field played a part in that. Houston played a style more conducive to a crappy pitch as it was a beautiful pass in the air to setup the first goal and a cross to assist the second.

Some Praise & Criticism for Vermes — Not an Excuse

I have been really hard on Peter Vermes for lack of squad rotation and poor use of subs. I would honestly say he handled rotation well even if I want to complain a little about the subs.

Second — subs. I didn’t love these as much. Gerso coming on makes some sense because, while he’s started the last three games, he didn’t play 90 in any of them and he was definitely the more effective winger. Russell made less sense. He played all 90 the previous game and he looked tired not too long after coming on. I get that he was the best offensive option on the bench but I think leaving on Hurtado wouldn’t be bad. Then when Shelton gets tired Salloi could maybe come on for him?

Where I will give Vermes the benefit of the doubt is with adding Winston Reid to the lineup. It didn’t work, but his team was clearly done at that point so trying to hold on for a draw isn’t terrible. Where I would criticize is after Houston takes the lead. PV has two subs he can make still. Take off one of the CBs for Daniel Salloi and put on Cameron Duke’s fresh legs for Zusi. It probably wouldn’t matter, but might as well go for it.

Points Per Game — Also Not an Excuse

Are Sporting Kansas City playing well? Not really, but despite all the congestion and a few recent injuries, things are still pretty good when it comes to the standings. Sure, some teams have played less games, but on a points per game basis, as of this writing, Sporting are still fourth best out of 26 MLS teams. They have 1.70 points per game. That only trails the Columbus Crew SC (2.22), Toronto FC (2.00) and Seattle Sounders (1.88). And Toronto is on the softball schedule of only playing the Montreal Impact and Vancouver Whitecaps.

Obviously most of those points came from the first five games, but teams are up and down. This could be the mid-season slump (I mean, there are only going to be 23 games and 10 are done). Soooo many teams get into the playoffs too, it’s not important to be hot right now. Get hot before the playoffs. That’s the formula to win MLS Cup. Especially with the single elimination format.

Barring a complete collapse, Sporting will make the playoffs. Look across the league at all the bi-polar performances and know KC aren’t alone. They have some stuff to fix but I’m finding enough bright spots (a good chunk of goals, lots of minutes spread around — especially to kids) to maintain a least a little optimism.

I’m still a little worried, but there is no need to panic. Go win at home against Minnesota United next Sunday and things will be just fine.