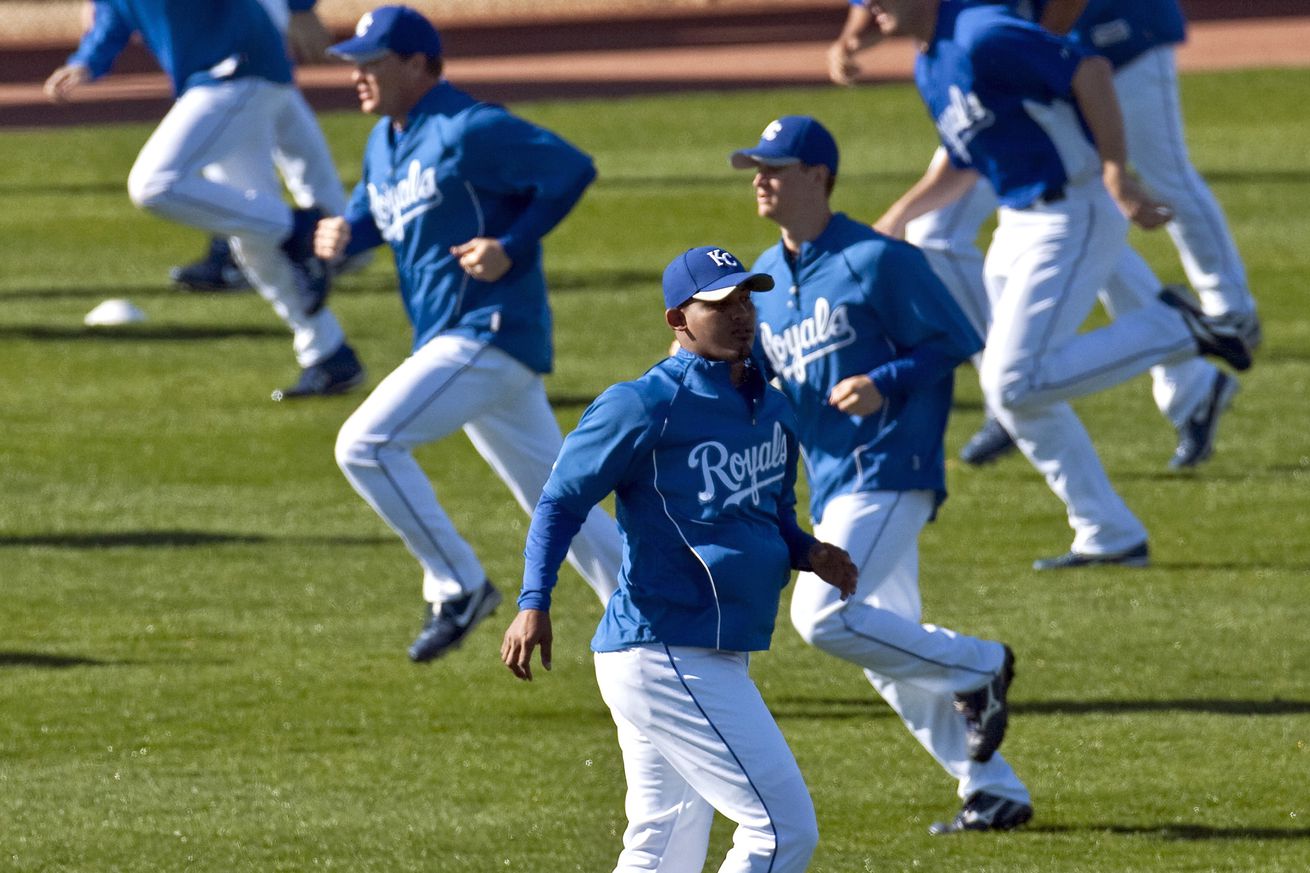 Fake games in the sun!

Spring training is back in full gear and before you know it, fake games will be played in the warm sun of Arizona while you sit in your office cubicle in 30 degree weather. In the meantime, Royals players will be doing calisthenics and working on fundamentals that are the only thing missing from them becoming true contenders.

So what do you need to know about Royals spring training?

Where is spring training?

The Royals have trained in Arizona since 2003, calling the Phoenix suburb of Surprise their spring training home. They share a facility with the Texas Rangers, and play games against 14 other clubs that work out in the area.

The Royals play at Surprise Stadium, which seats 10,500 fans. For more information on the stadium or to order tickets, click here.

Spring training games offer fans a chance to get much closer to players than they would during regular season games with plenty of opportunities to get autographs and foul balls. Read up on tips for spring training games, a restaurant guide, and a list of other things to do in Arizona here.

The Royals will begin spring training games this Friday, with a charity game against the Texas Rangers. In all, they will play 32 exhibition contests, including three split-squad games. They will head north the weekend before the season and play two exhibition games indoors in Milwaukee on March 23 and 24 before opening up the regular season on Thursday, March 26 in Chicago against the White Sox. You can see the complete schedule here.

You can listen to the dulcet tones of Denny Matthews on the Royals Radio Network this season. Most spring training games will stream on royals.com, and on the radio you can hear 13 games on 610 Sports in Kansas City, with sister station 1660 The Score airing another eight games. You can see the radio broadcast schedule here. For those outside of Kansas City, check local listings.

The March 13 and 14 games are subject to change due to obligations with Kansas State basketball.

As for television, well the Royals are still in negotiations with Fox Sports Kansas City for the television rights for the 2020 season. According to MLB.com reporter Jeffrey Flanagan, there is a handshake agreement on a new deal, and a television schedule should be announced within a week. Generally, a handful of spring training games are aired on TV, typically the evening games.

Update: A television schedule has been announced.

Who will be in camp?

The Royals have 29 position players and 39 pitchers in big league camp, but will have to whittle that to 26 players overall by March 26. You can see a complete roster here.

Who are some names to watch?

The Royals have two important veterans returning from injuries last season. Six-time All-Star catcher Salvador Perez returns from an entire year off following an elbow injury that required Tommy John surgery. The track record for catchers returning from such an injury hasn’t generally been good, but the sample size is so small and Salvador Perez is such an outlier already.

Young shortstop Adalberto Mondesí is also returning after missing 60 games last year with a shoulder injury. Mondesí injured the shoulder in July and missed six weeks, returning on September only to re-injure it in the final week, requiring off-season surgery. The Royals are looking for ways to keep Mondesí on the field more, as injuries have robbed him of playing time throughout his career.

Watched Royals SS Adalberto Mondesi take swings from the right side of the plate this morning. First time I’d seen that during this rehab. He has been swinging from the left side for a while.

Royals fans will also want to see how Whit Merrifield and Hunter Dozier deal with a full-time move to the outfield. Maikel Franco has tinkered with his swing in an attempt to unleash his full potential. And Royals fans may want to keep their eye on Alex Gordon in what could be his last spring training season.

As for younger players, the Royals are excited about a crop of young pitchers that has made waves in the minor leagues. Brady Singer, Jackson Kowar, Daniel Lynch, and Kris Bubic were all selected out of college in the 2018 draft, but have quickly risen through the system and could be ready to make an impact very soon. The Royals have not ruled out the possibility of Singer making the club as a starting pitcher, and in any case, we could see many of these pitchers some time this summer in Kansas City.

Who is in the best shape of his life?

Infielder Nicky Lopez had a rough start to his Major League career last year, and vowed to bulk up to hit with more authority this season. He followed the same diet Whit Merrifield used to gain weight and has gained about 18 pounds to get up to 183 for the start of spring training.

Salvador Perez has also lost 22 pounds after gaining a bit of weight during his rehab when he was just sittin’ around, not playing baseball. First baseman Ryan O’Hearn also lost seven pounds, losing body fat and gaining muscle.

Royals SS Adalberto Mondesi went through a pretty solid workout this morning, fielding grounders on the field and such. The cliche must be used. He looks to be in good shape.

What positions are up for grabs in camp?

Most of the starters are set, and new manager Mike Matheny has a good idea on who will be in his rotation and who will close out games. But on a team that is coming off 103 losses, no positions should be set in stone, and there are a few positions that could be up for grabs in spring training.

Ryan O’Hearn is the incumbent, but after such a disappointing 2019 season, he will likely need to have a strong spring to secure his starting spot. The lefty masher made a splash in 2018, smashing 12 home runs in just 44 games for an OPS of .950. But he regressed badly last season, finishing under the Mendoza Line with a wRC+ of 69, 16th-worst in baseball by anyone with at least 300 plate appearances.

Getting more elevation on swings could help O’Hearn, but the Royals brought in another option in case O’Hearn continues to struggle, acquiring Ryan McBroom from the Yankees last September. McBroom impressed, although it came in just 23 games. He brings in a good amount of power and can hit from the right side which could make him an effective platoon partner with O’Hearn, who struggles against lefties.

The first four spots in the rotation are set with either Danny Duffy or Brad Keller likely to get the Opening Day assignment, with Jakob Junis and Mike Montgomery set to follow. Singer will compete for the fifth spot in the rotation, likely with veteran righty Jesse Hahn and lefties Foster Griffin and Eric Skoglund. Glenn Sparkman and Jorge López are also possibilities, although the Royals have indicated they prefer to see them coming out of the bullpen. The Royals had considered bringing in another free agent starter to compete for the job, but with few options left, they have focused on internal options.

Ian Kennedy will close games for the Royals, Scott Barlow will set him up, and Tim Hill is the situational lefty reliever, although he has drawn trade interest. After that, the bullpen roles are very much in flux. Veterans like Greg Holland and Trevor Rosenthal will each get a good shot at making the team if they can show they are healthy and can throw strikes.

López and Sparkman could each end up in the pen if they don’t land a starting role, and Rule 5 pick Stephen Woods, Jr. will have to make the team or be offered back to the Rays. Kevin McCarthy and Jake Newberry each showed some potential last year and Richard Lovelady and Josh Staumont are both promising young arms. Daniel Tillo has also emerged as a dark horse candidate after an impressive showing in the Arizona Fall League and with Team USA. Veterans Heath Fillmyer, Chance Adams, and Braden Shipley are also options, as well as Kyle Zimmer, although the recent ruling to give him a fourth option year could work against him making the team.