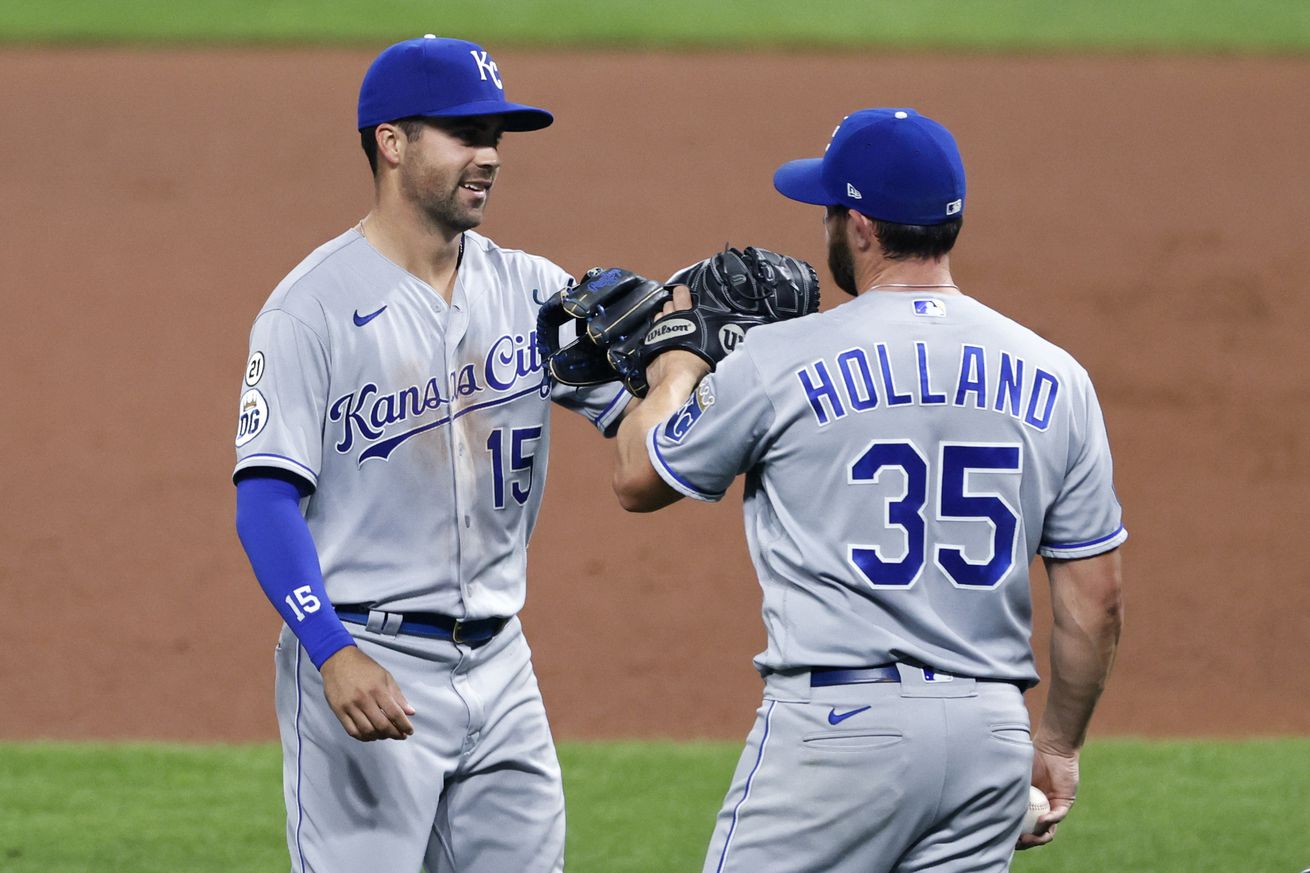 Time for another quarterly check on the Royals’ fortunes.

If it seems like we’re doing these quarterly check-ins every other week… It’s because we are. Welcome to Covid-ball and 2020.

On Thursday, the Royals completed their 45th game out of 60 scheduled. With 15 games remaining, they’re playing for pride. A pair of extended losing streaks (six games at the first of August and seven to open September) effectively submarined their chances of playing in the postseason. Other teams have had longer losing streaks, but only the Royals and the Rangers have had a pair of streaks of six losses or longer. (Special shoutout to the Diamondbacks who have had three losing streaks of at least five games this year.)

Damn the expanded playoffs. The Royals will be spectators for the fifth consecutive October.

Nine Royals have come to the plate more than 90 times in this abbreviated summer. Here’s how they stack up via wRC+ and OPS+

Let’s use this as a jumping off point to examine the offense. We’ll start at the top.

Through Merrifield’s first 149 plate appearances (to the 34th game of the season), he was hitting .296/.356/.511. None of the numbers were season-highs, but that’s a solid line. Especially for a guy we pegged as a goddamn professional hitter in this space just about every time he’s been mentioned.

The exit velocity was consistent on average, but it looks like he was making more than his share of soft contact. It’s just a slump. It happens and when it happens during a short season, you take even more notice. And it’s probably not a coincidence the Royals suffered their longest extended losing streak of the season while Merrifield was scuffling.

And it looks like his luck is turning. In the Royals’ three wins in Cleveland, Merrifield collected seven hits in 14 at bats with three extra base hits. Merrifield hits, and the Royals can win. That’s baseball, readers.

Adalberto Mondesi is the worst offensive player in baseball

There’s no getting around this fact. His wRC+ of 36 is 16 points lower than the second worst number in the league. There’s been flashes where you think he’s on the verge of putting it together—he has three three-hit games this season—but it’s basically one step forward and about ten steps back. It should also be noted that after his 1-4 night in Cleveland on Thursday with a walk and two runs scored, Mondesi’s wRC+ jumped seven points. The point is, in this shortened season there’s still plenty of opportunity to see the numbers fluctuate.

But think about it. With 33 hits on the year, Mondesi has collected nearly a quarter of his output in three games.

Maikel Franco has been surprisingly average

I have to admit to lowered expectations when the Royals acquired Franco, but he’s been a pleasant surprise. The offense has been hovering around league average (until Thursday when his 3-5 performance with a three-run dinger that saw his wRC+ leap from 101 to 108) and his defense hasn’t been as bad as I thought it would be. He’s butchered a few grounders and seems to try to force the play when there isn’t one, but overall he’s been adequate at the hot corner. Franco has been worth -2 Defensive Runs Saved. Not great, but it matches his career best and is much better than his -14 in roughly two-thirds more playing time in 2018.

Collectively, this is not a good offense

There are a couple of bright spots, but it’s not like they’re supernovas. The rest… ugh. Overall it’s an offense that scores an anemic 4.02 runs per game with a .305 OBP. Both rates rank 27th out of the 30 teams.

Royals starters have a 4.88 ERA through their first 45 games. The relievers check in at 4.12. Just on that stat alone, you can see where the strength lies in the staff. But that doesn’t mean there haven’t been successes in the rotation.

Brad Keller had the four best starts by a Royals starter in 2020… prior to Thursday. Brady Singer carried a no-hitter into the eighth inning and finished with a Game Score of 86. Truly a phenomenal performance.

The future is now

The rookie starters have taken their lumps, but wasn’t 2020 the best time for that to happen? The results haven’t always been there for Singer and Bubic, but the experience they’ve gained in the big league rotation has been valuable. Now they know what they need to work on in the offseason to take the next steps at the big league level. We’ll get another look at Carlos Hernandez on Saturday, who has shown promise in his two appearances out of the bullpen.

Even going with a six-man rotation, having three rookies giving the team starts is a positive development in a season that was ultimately meant for… development. It’s about positioning for 2021 over these final 15 games.

During the rebuild, while the focus is most assuredly on the development of the future talent, the Royals will continue to build a pitching staff that consists of castoffs and rehabbers, looking to get their careers on track. In the case of Trevor Rosenthal, the Royals played their role to perfection. Rosenthal was pumping gas and the Royals found a contender that needed relief help. Rosenthal turned into Edward Olivares.

They need more of these quick flips. Greg Holland has been performing well, so you have to wonder if there was a market for him at the deadline. Missed opportunity? It feels like it. Ian Kennedy ended up on the IL ahead of the deadline and under normal circumstances, would have been a candidate for a move, but truthfully, it wasn’t the injury that prevented him from being moved. It was performance and contract. Matt Harvey was worth a flier, even in a short season, but it’s clearly not working out.