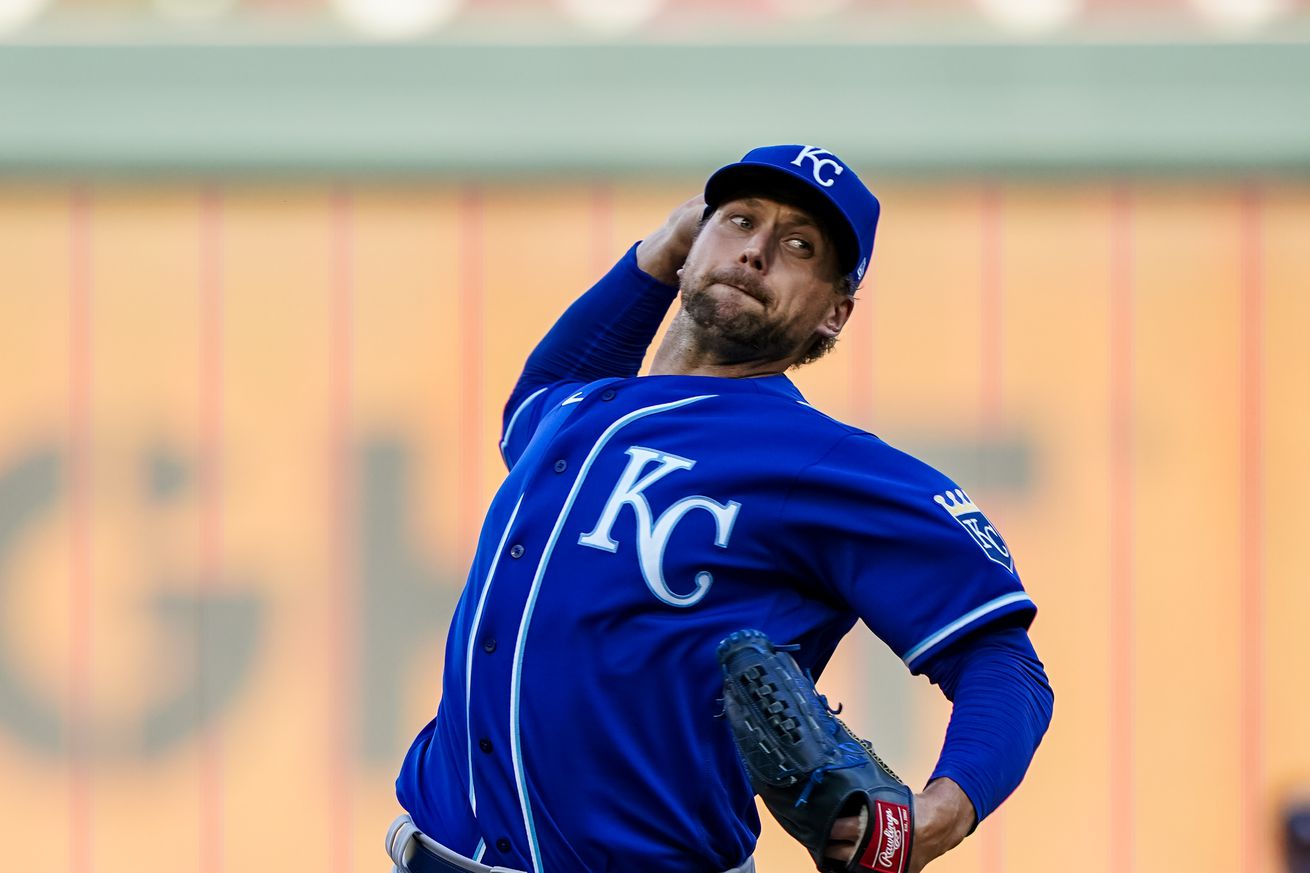 Teams always need bullpen help, and the Royals can offer it.

No one knows what to expect with this year’s trade deadline, which was moved back to August 31 to accommodate the shortened season. With many teams still in it due to an expanded playoff, and uncertainty as to whether the post-season will be played, most teams will be in “wait-and-see” mode.

However the Royals may be better positioned than most teams. They should definitely be sellers at this point – they are closer to having the worst record in the league (2.5 games out) than a playoff spot (4 games out). And they have many tradeable assets that many teams will want – relievers on short term contracts. Both Trevor Rosenthal and Greg Holland were brought in as low-cost gambles, and Dayton Moore has hit on both. Rosenthal has converted all six of his save opportunities and has been one of the hardest-throwing relievers in the game with improved control. Holland has been shaky at times, but overall has a 3.38 ERA and 4.03 FIP despite a much lower strikeout rate. Ian Kennedy could also be dealt, but his home run issues and contract may diminish interest. Teams may inquire about Scott Barlow or Josh Staumont as well, but the Royals likely see them as part of the future.

Trading for prospects will be difficult, as the Royals won’t be able to scout them. Technically, you can only trade for players in a 60-man club pool, although the Royals could accept a “player to be named later” with a non-60-man club pool player named this off-season. The Royals likely shouldn’t expect top prospects for short-term rentals like Rosenthal and Holland, instead they would likely net a 40-45 Future Value prospect or two, although no one is quite sure how the market will behave this year.

Which teams should be most interested in adding bullpen help, and what could the Royals target in a trade? Let’s look at some of the suitors.

Despite a strong bullpen performance the first-place Rays seem to be in the market for a reliever and are said to be “aggressive” in trade talks. It is not crazy to think they could make a big play for a reliever like Josh Staumont – just last summer they offered a top 100 prospect named Jesus Sanchez in a deal for dominant rookie reliever Nick Anderson. But even Trevor Rosenthal and Greg Holland should be attractive to the cost-conscious Rays due to their low salaries.

The Rays pitching staff has been hurt by injuries, so they may be reluctant to deal their upper level pitching prospects. Fortunately, they are deep in hitters as well. First baseman/third baseman Nate Lowe seems to be blocked in Tampa Bay and has been speculated as a potential return for a pair of Royals relievers. Lowe hit .263/.325/.454 with seven home runs in 50 games with the Rays last year, but is stuck behind Yandy Diaz at third and Ji-Man Choi and Jose Martinez at first this season.

The Royals have had success with their 2018 draft class, so perhaps they would be interested in Rays first-round pick Nick Schnell from that year. The 20-year old has some swing-and-miss to his game, but is toolsy and skilled enough to stick in center field, and hit .265/.325/.448 with five home runs in 55 games last year in the low minors. Their second-round pick from that year, Tyler Frank, is a right-handed hitting second baseman showed decent power and plate discipline at Florida Atlantic and held his own in the wood bat Cape Cod League. Lucius Fox hasn’t developed much power, but the shortstop has good on-base skills, plus speed, and above-average defense.

The Yankees find themselves chasing the Rays in the standings and could definitely use more bullpen depth. Zack Britton and Tommy Kahnle are both out, and Aroldis Chapman just recently returned after an absence due to COVID-19, and it is uncertain how he will perform upon his return. The Yankees are always looking to improve and a deep bullpen could make a big difference in an expanded playoffs.

The Yankees farm system is stocked with many international signings, with some good live arms and many toolsy hitters. Right-hander Miguel Yajure, ranked #11 in the system by Fangraphs and #15 by MLB Pipeline, is one of the more polished arms, posting a 2.26 ERA with 122 strikeouts in 127 2/3 innings in High-A as a 21-year old last year, then dominating in two Double-A starts. Nick Nelson would be a lower-upside, MLB-ready pitcher who could fill in the back of a rotation or in the bullpen. Albert Abreu is a former Top 100 prospect who has battled injuries and struggled with command in Double-A last year, but features a high-90s fastball. Most of the top hitters in the system are very young and have struggled with plate discipline but outfielder Canaan Smith is an exception as an on-base machine who drew 74 walks with a .405 on-base percentage as a 20-year old in Low-A ball, but still has the tools the Royals will love in the outfield.

The Cubs are in first place, but have done so with a lousy bullpen that has a 5.79 ERA. Closer Craig Kimbrel has seemingly lost his job, so manager David Ross could use a proven closer to step up and stabilize his pen. The Royals are probably a bit familiar with the Cubs farm system as there were rumors the Cubs were interested in Whit Merrifield last summer.

The Cubs took second baseman Chase Strumpf in the second round of the 2019 draft, but with Nico Hoerner already at second, Strumpf could be expendable. The former UCLA grad shows good on-base skills and solid gap power, hitting .244/.374/.400 with three home runs in 39 games in the low minors in his first pro season. Cory Abbott struck out 166 hitters in 146 2⁄3 innings in Double-A relying mostly on breaking stuff and could be MLB-ready at age 24. Riley Thompson a 24-year old right-hander in A-ball last year, features outstanding spin rate on his curveball and has hit 100 mph but is a bit inconsistent with his velocity.

The Rockies have had decent starting pitching, but their bullpen has held them back a bit. Wade Davis is hurt, and has been terrible in the last year, so the Rockies are relying on Daniel Bard – who hadn’t pitched in the big leagues in seven years – to close games.

Yonathan Daza could profile well for Kauffman Stadium as a high-contact hitter with speed. He doesn’t bring much power, but he can hit for average, draw walks, and set the table, although he struggled in 44 big league games last year. Brenton Doyle offers plus speed, but offers raw power and good on base skills as a draftee from a small Division II school that may have gotten overlooked. Ben Bowden struck out 79 hitters in just 51 2/3 innings last year, but was hit around a bit in the hitter-happy Pacific Coast League. The 25-year old profiles as a reliever, but he could step in right away and contribute.

Would you look at that, the Miami Marlins are in the playoff hunt! Despite going into this season projected to finish with the worst record in the National League, and being decimated by a COVID-19 outbreak, the Marlins have a winning record and are just two games out of first place. Miami has a young bullpen that has struggled, and could use a veteran or two to hold leads.

Royals fans would probably love to target local kid Kameron Misner, the Marlins’ 2019 first-round pick out of Mizzou, but the toolsy outfielder may not be available for just a rental. But if you want a toosly outfielder you can look to Jerar Encarnacion, who slammed 16 home runs in the low minors last year. If you prefer an outfielder with polish who can get on base, Peyton Burdick fits that bill with a .407 on-base percentage in 69 games in A-ball in 2019 with decent power to boot. On the pitching side, Jordan Holloway could step in as another hard-throwing reliever, although he struggles with control walking 66 hitters in 93 innings last year.

Oakland Athletics – The A’s already have four former Royals in their bullpen – Liam Hendriks, Joakim Soria, Jake Diekman and Burch Smith (until he got hurt) – why not one or two more? Grant Holmes was once a top pitching prospect, but at age 24, his stock has fallen and he does not seem to be in the plans for Oakland.

San Francisco Giants – The Giants are unexpectedly hovering near .500 and could actually be buyers. They have the worst bullpen in baseball, so maybe they get desperate and offer 6’11’’ right-hander Sean Hjelle, who struck out 139 hitters in 143 2⁄3 innings last year. Or the Royals could settle for Tristan Beck, a college standout who the Giants acquired last year from the Braves for Mark Melancon.

Toronto Blue Jays – The Jays have already made a move this week, suggesting they are ready for a post-season run. Adam Kloffenstein is a big-framed right-hander who was considered one of the best high school arms in the 2019 draft and has kept sharp this summer by pitching in the Constellation Energy League.