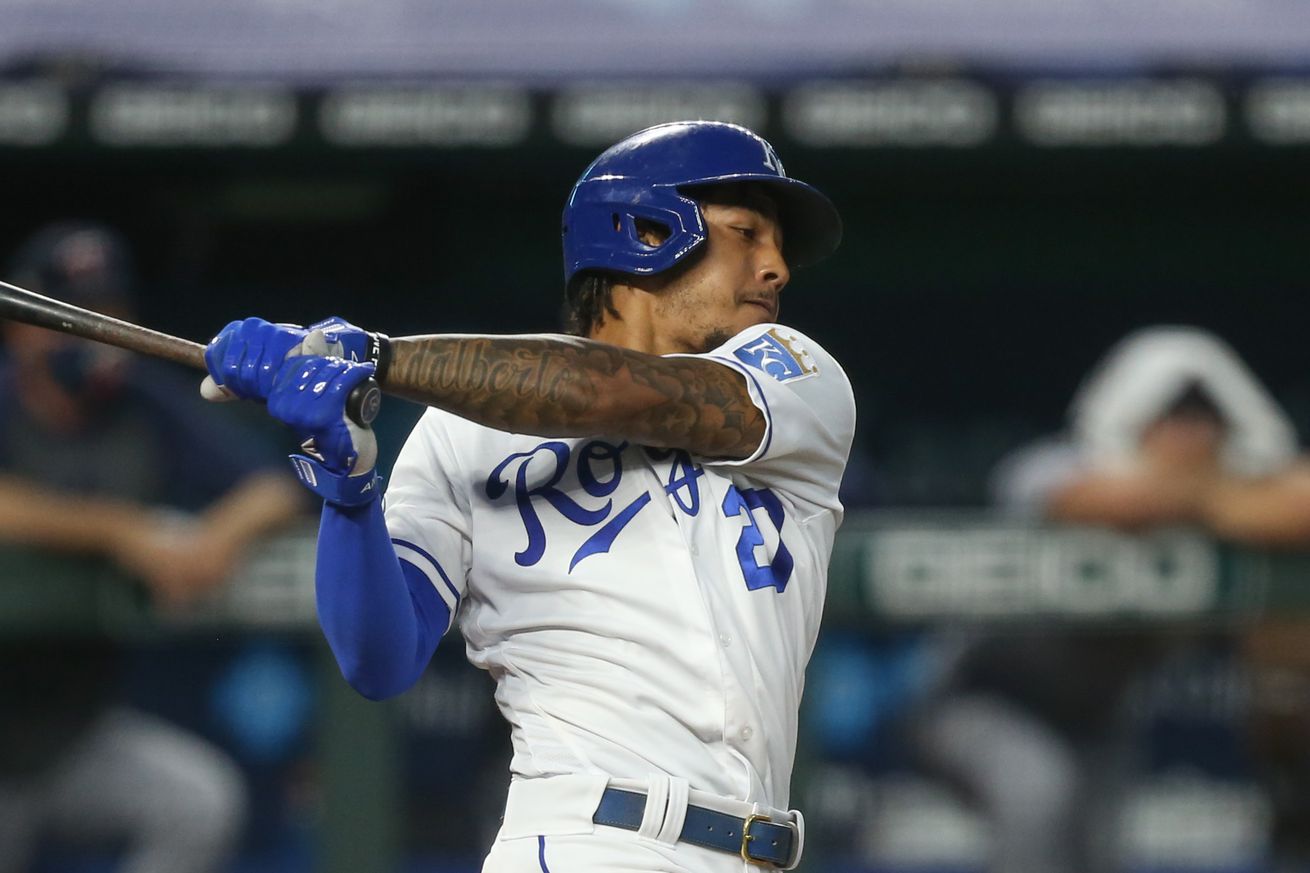 Adalberto Mondesi is in a funk. He knows this. The team knows this. The fans definitely know this. The 25-year old shortstop came into this season hoping to break out, and although the pandemic interrupted the baseball schedule and caused logistical nightmares and health concerns, it was thought to have helped Mondesi, who was trying to recover from a shoulder injury and was questionable to begin the season back in late March. A shorter season might mean he had a better chance of staying healthy, a problem that had plagued him in his short career.

But instead of breaking out and achieving the stardom many see when they evaluate his speed and power tools, Mondesi has had a nightmare of a season. He is hitting .182/.206/.235 and has struck out in 31 percent of his plate appearances. We knew Mondesi has trouble drawing walks, but he taken that to new heights this year with just three free passes in 136 plate appearances, a number exceeded by light-hitting reserve infielder Jace Peterson of the Brewers in his first 10 plate appearances.

There are 155 qualified hitters in Major League Baseball, Mondesi is dead last among them in OPS+, wRC+ and WAR, according to Fangraphs. His wRC+ is 13 – THIRTEEN! – an offensive number exceeded by 12 pitchers at the plate last year. He has swung and missed 20 percent of the time this year – the third-highest among qualified hitters. Even for pitches in the strike zone, he has been ninth-worst at making contact.

We are already in the last four weeks of the season, what can the Royals do with Mondesi at this point? Here are some options.

Take him off the roster

This isn’t really an option, but I wanted to mention it so everyone knew – Adalberto Mondesi is out of options. That is, he can’t be sent to the Alternate Site without clearing waivers, and despite his struggles, he would get claimed pretty quickly. The Royals have been pretty aggressive promoting their top prospects to the big leagues, but in Mondesi’s case he was almost certainly called up before he was ready. And unlike Alex Gordon and Mike Moustakas – both of whom were demoted after slow starts to their career, Mondesi must work out his issues at the big league level.

The trade deadline has also passed, so he can no longer be traded, not that the Royals were ever seriously considering that option. You would be selling low on him if you were to deal him this winter, and with more teams now valuing plate discipline, a hitter with his lack of recognition of strikes may not be valued as much despite his tools. So the Royals are kinda stuck with Mondesi for now, the only question, is what do they do with him?

Mondesi got a day off last week, which could be just what he needs to reset.

“Multiple voices yesterday were like, ‘I think it’s time. He needs a day,’” Matheny said Tuesday. “And up until that point, I’m not going to flinch. If I’m throwing him in that lineup — and you guys can count on this — he’s my guy. And we’re gonna roll and keep going. Because you never know when that night comes and everything just clicks.”

But should the Royals move him out of the starting lineup altogether? Shortstop could be covered by Nicky Lopez with Whit Merrifield moving to his more natural position at second base. Bubba Starling could get a longer look in center or the Royals could get a look at their newest acquisition, Edward Olivares. There is also the unlikely possibility that you could throw out Bobby Witt, Jr. at shortstop to see what he can do – although the early struggles of Adalberto Mondesi may be a cautionary tale against rushing the young prospect.

Still, what matters is his long-term development, and he can’t really get better sitting on the bench. The only way to get out of a slump is to hit your way out, and the perfect time to give young players reps even when they are struggling is when the standings don’t matter to you so much.

There is some evidence he has been slightly unlucky. His batting average in balls in play is .270. When he does make contact, his hard-hit rate and medium-hit rate are both around average. He hit a ball on the numbers last night for a sharp one hopper down the first base line, only to have it snagged by Carlos Santana for a double play.

Mondesi has had 12 balls with an exit velo of 100+mph this year.

On the other hand, his numbers aren’t really getting any better – he is hitless in his last 21 plate appearances with nine strikeouts. He looks completely lost at the plate at times, swinging over fastballs, seemingly guessing on pitches – he even pulled his bunt back on a fastball right down the middle to strike out.

Move him to centerfield

This has been suggested by more than a few fans, as perhaps a way to relieve his mind and take the pressure off by moving to a less challenging position. His defense has taken a hit this year, mostly due to a high error rate. His range has still been solid and he is tied for the fourth-most defensive WAR by a shortstop, according to Baseball Reference.

In other words, despite a few miscues, Mondesi is still providing value with his defense. Moving him off the position simply removes what remaining value he has. Move him to center field and he has to learn a new position, which gives him something else to worry about other than his poor hitting.

Perhaps long-term, Mondesi will have to move to center field eventually, as Alec Lewis suggested in his column looking at future Royals lineups. But doing so on the fly this year, when he already has enough on his mind, seems like a bad idea.

The Royals have a lot riding on Mondesi being at least a solid shortstop, if not a star. To be honest, he doesn’t really even have to hit that much to be a factor – he was slightly below league-average as a hitter the last two seasons but was worth nearly 5 WAR in 177 games because his speed and defense are such assets. Turning Mondesi’s career around may be the first big test of manager Mike Matheny and the revamped hitter development program the Royals have implemented.