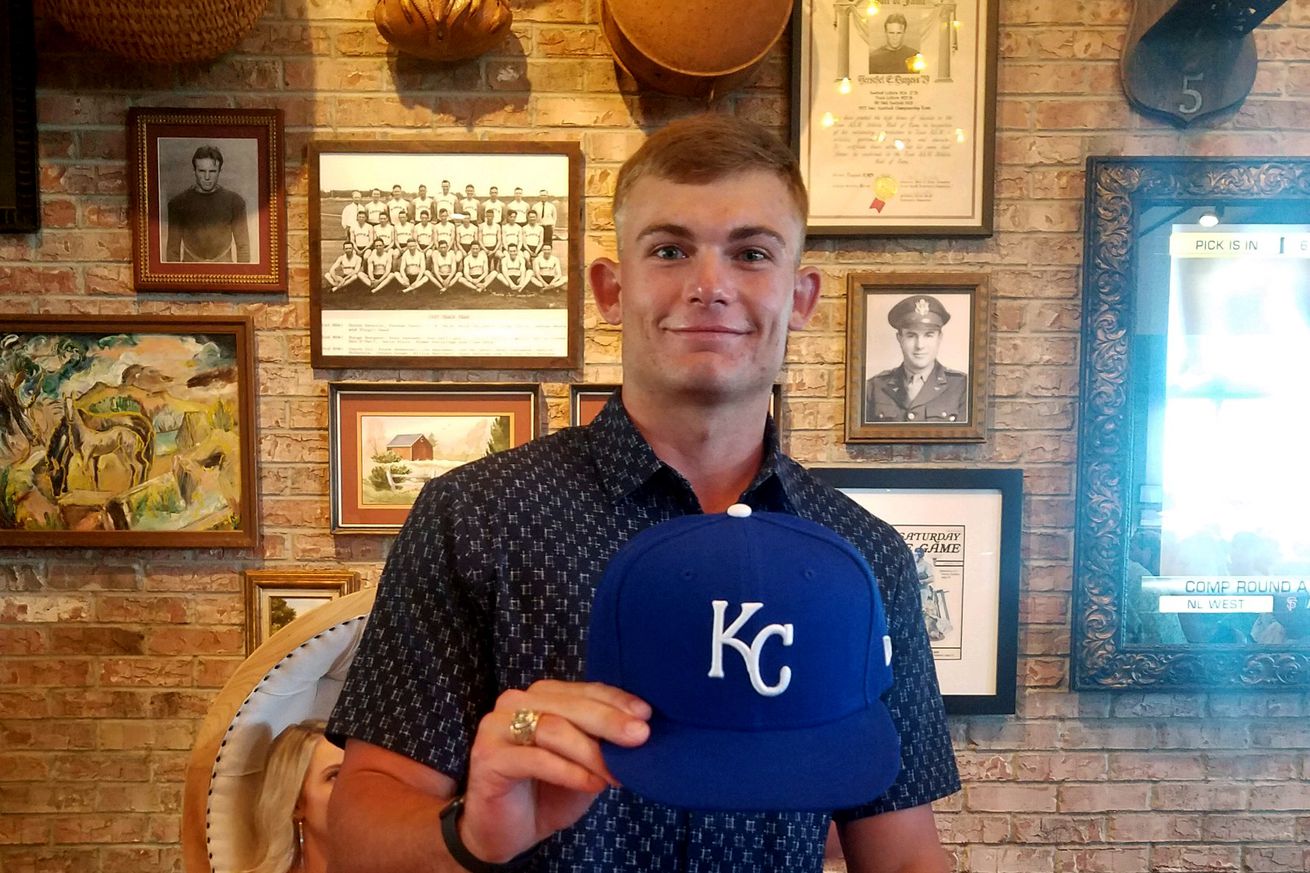 Until we have more pictures of Asa, you’re just going to get this over and over again | Photo by MLB Photos via Getty Images

What have his draft peers done?

With respect to the rest of the 2020 Kansas City Royals draft class, all of whom I wish the very best and hope they become stars in Kansas City, the success of the draft class rests primarily with the left arm of Asa Lacy. Drafted out of Texas A&M, Lacy was the fourth pick in the MLB Draft but valued by a majority of experts as the second- or third-best player in the draft.

Furthermore, having a top-five pick in the draft ought to be rare, and the results from that pick therefore of particular importance. A team doing its job should ideally not pick so highly except, oh, once a decade or so at the low point of a rebuild, because it means that the team was successful enough to not bottom out.

This has not been true for the Royals, of course, who have generally made poor decisions at the top of the draft. Lacy was the Dayton Moore regime’s seventh—7th!—top-five pick, as much an indictment on the Royals’ drafting and developing ability as anything else. The jury will be out for Bobby Witt Jr. for at least half a decade, but the Royals have had more busts (Christian Colon, Bubba Starling, and Kyle Zimmer) than success (Mike Moustakas and Eric Hosmer).

That being said, Lacy is tied for the highest Royals draft pick spent on a college pitcher in the organization’s history, sharing that piece of trivia with Jeff Austin from the 1998 draft (Luke Hochevar was selected from an independent league after he left college). So, there’s not a lot of history there.

While there are a lot of potential outcomes for Lacy—everything from future Hall of Famer to total bust—looking back on historical outcomes helps set a reasonable framework, because drafting is hard. Below, we’ll take a look back at the college pitchers picked in the top five selections of their respective draft. We’ll be looking from Austin’s draft year, 1998, through 2015. They are separated into groups based on their production. Overall, there are 26 total pitchers in this group.

The Hall of Famer

Verlander is simply the best pitcher of his generation. Others, such as Clayton Kershaw and Zack Greinke, had had more individually dominant seasons or stretches of their career, but none can match Verlander’s sustained history of success. A two-time Cy Young winner and an eight-time All-Star, Verlander also has Rookie of the Year and MVP awards on his resume and some seriously impressive postseason play.

The Ring of Honor

While not quite Hall of Fame caliber—at least not yet—these three pitchers, all of whom were first overall picks in their respective drafts, have been excellent in their own rights.

Cole was a late bloomer. From 2013 through 2017, he produced 11 WAR for Pittsburgh as a pretty good pitcher. He exceeded that production, at 12.3 WAR, over the last two years for the Houston Astros. Had he been that good to start, he would definitely be on a Hall of Fame track.

Somehow, the hyped Strasburg seems like a disappointment. He hasn’t been. Strasburg has been an excellent pitcher since his first full season as a healthy starter in 2012. The World Series Champion has averaged 3.7 WAR over the last eight seasons, and among the three listed in this tier, Strasburg seems likeliest to ascend to the HoF tier.

While David Price has been fantastic over his career, and is the only one among Cole and Strasburg to win a Cy Young award, he’s tapered off as his 30s have begun. Still, you would never oppose drafting a David Price in the draft.

The Above Average Avengers

None of these four achieved transcendence or even sustained excellence, though they have all had their individual moments (Prior had as good a season as anyone on this list with his brilliant 2003 campaign). But as a group, they are the type of borderline All-Star player that you love to have on your team. Good baseball teams are ultimately made with good baseball players, which applies to all these pitchers.

While injuries scuttled the careers of Prior and Mulder, Gray and Bauer are young enough and talented enough that ascension into the next tier should be possible. Both are under 30 and have put in at least one markedly above average season.

This might be the most frustrating group for fans. When a team spends a top five pick, they are dreaming on someone who can make All-Star games, not just competently fill out a rotation. Yet that is exactly what these guys have done. So it goes sometimes.

Perhaps worst of all, these types of players almost always exhibit some skills that portend some sort of awakening to their full powers. For instance, the 25-year-old Gausman had a 3.9-WAR season in 2016 for the Baltimore Orioles. To date, that single season represents nearly 38% of his career WAR.

While you could probably also call these guys “busts” in the general sense, these four differentiate themselves through one or two seasons where they were actually legitimately good. Not great! But good. Humber even threw a perfect game! That in and of itself might be the single greatest achievement on this list, but then again Jorge Lopez pitched eight perfect innings and almost got a perfect game himself, so. Baseball!

Look at all these players. Nearly 40% of college pitchers selected in the first five spots of their draft have been unequivocal busts. Drafting is hard! These guys were never good, even for a little bit, and most made their way to the big leagues primarily on the back of their draft resume—somebody will be more willing to gamble on the second overall pick in the draft than the 214th.

There are some pretty sad stories here. Bullington was the top selection in his draft, and he never was any good whatsoever. He even made a cameo as a Royal in his final stop in the big leagues in 2010. Royals fans know all about Zimmer, whose arm troubles have prevented him from big league success (though his debut was in and of itself a celebration).