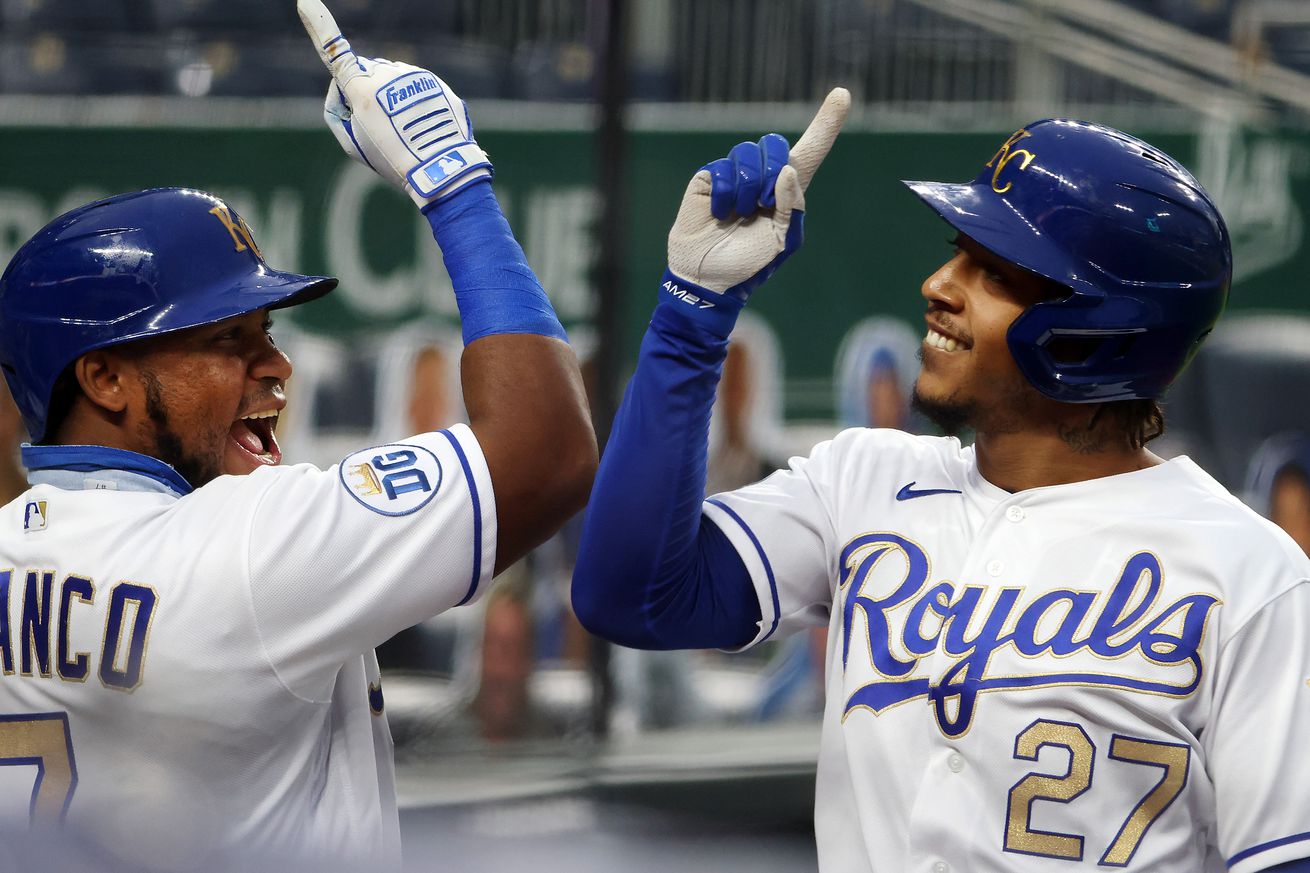 “He’s swinging early, but he’s not necessarily put the ball in play early,” Matheny said. “So he’s getting into deeper counts, then rifling balls the other way. What’s impressing me is you’ll see a couple swings and be like, ‘Dang. He’s just not on that.’ Then the next thing you know he’s hitting a hard line drive somewhere.

“That, to me, is making adjustments. And it’s not just one pitch. He’s laying off some pretty tough pitches, swinging through some at times, but it seems if they do it again, he gets them.”

Danny Duffy said to bury him a Royal, of course, but at $15.5m on a last-place team, there isn’t much logical sense for the front office to keep him around. Teams should be on the lookout for starters with a rather weak free-agent market and if the Royals can use some of that small payroll to buy down some of his contract then he makes a lot of sense to trade. Most of this could be based on the feel if they have a spot needed for younger and more talented player like Lynch or Kowar though. Moving the lesser of Kowar/Lynch ahead of 2021 in a package with Duffy or another to add a young, controllable position player seems like the move.

Kevin O’Brien at Royals Reporter looks at where Jakob Junis fits with next year’s club.

That being said, Junis is still a pretty flawed starting pitcher. Even though he is posting a hard hit rate of only 33 percent, according to Statcast, he is still giving up more contact overall (80 percent) than a year ago (78.3). For the last couple of years, the big challenge for Junis has been trying to limit the long ball. However, as evidenced against the Indians in his last start, home runs continue to be a problem. For as pretty and effective as his slider can be, he leaves pitches up in the zone far too often, and good hitters just continue to make him pay, even though he has roughly 471.2 innings under his belt at the Major League level. For a team that is looking to become competitive again, that kind of profile just doesn’t bode well for the future of the rotation.

Sam Miller at ESPN lists Adalberto Mondesi among the top 100 most exciting players in baseball.

The other day, a broadcaster said of the man at the plate, “Some guys just make it look so easy.” The man at the plate was Mondesi, who is hitting .200/.226/.273, has by far the worst win probability added in baseball this year and has been caught stealing more than any other hitter in baseball. It’s easy to snark, but it’s true that Mondesi does make anything look possible- — if not “easy” — and watching greatness thus far elude him produces a tense cognitive dissonance.

Leigh Oleszczak of KC Kingdom looks at what we learned from Brady Singer’s near no-hitter.

The amazing story of how former Royals pitcher Rich Dotson discovered he had a secret long-lost father who was also a former big league pitcher.

The Rays field the first all-lefty lineup in history.

What does exit velocity have to tell us about home runs this year?

The case for players moving into a bubble for the post-season.

Ten must-watch races down the stretch.

Dodgers broadcaster Charley Steiner almost walked away this year, but now broadcasts from his home.

What vegetables are best for carving baseballs?

Chess has become a streaming obsession.

A preview of the English Premier League season.

The story of one sperm donor, 36 kids, and a bunch of lawsuits.

Saturday Night Live will return to the studio on October 3.

Your song of the day is Art Pepper with Las Cuevas De Mario.