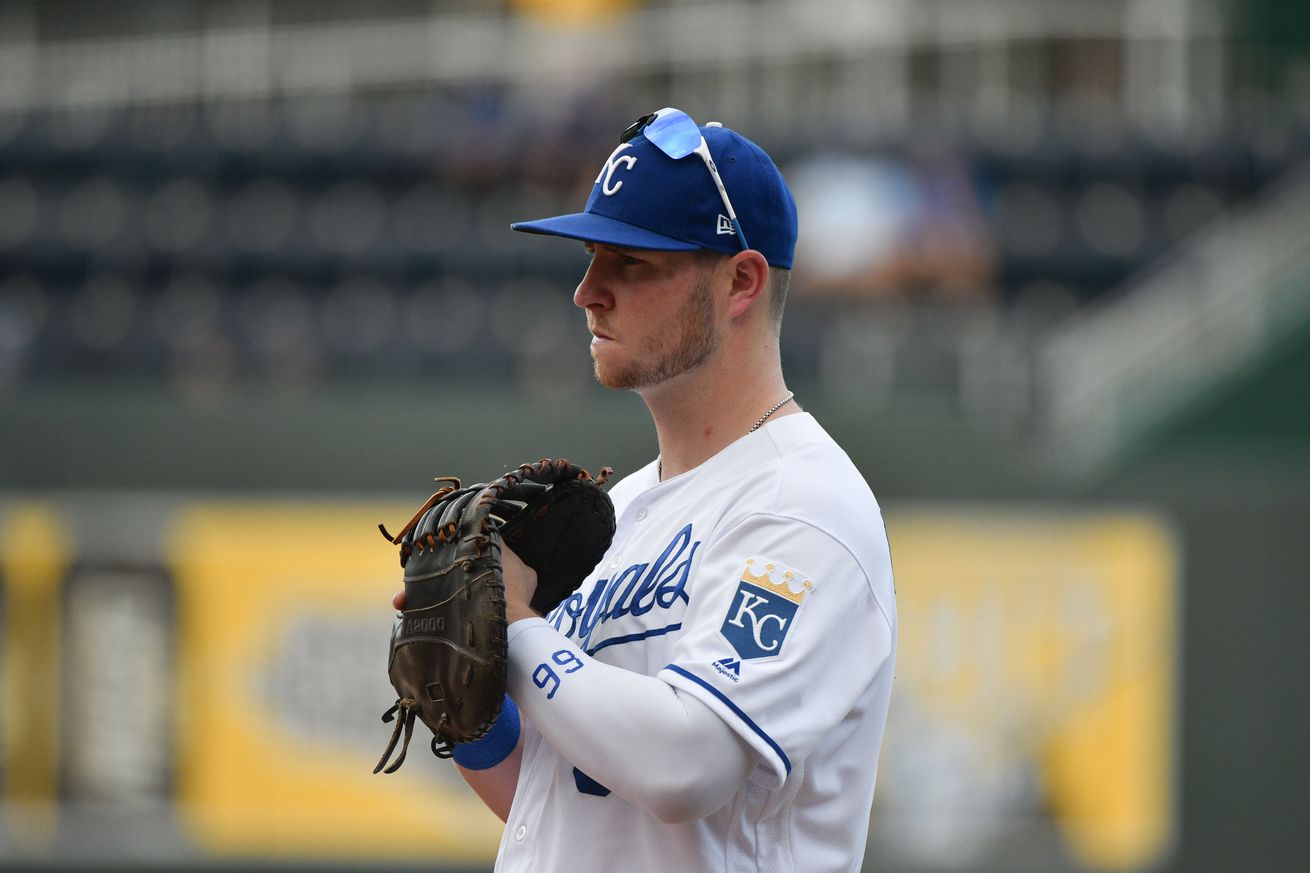 We could have a “soft platoon” at first.

Ryan O’Hearn talks to Lynn Worthy about adjusting his swing.

“Being able to make the adjustments I think is going to be good in the long run, understanding that I don’t have to swing out of my shoes in plus counts,” O’Hearn said. “I’m just staying within myself and going out there and having fun.”

Jeffrey Flanagan writes there may be a soft platoon at first base.

“I’m not ruling that (soft platoon) out at all,” Matheny said. “I’ve explained it, certainly to O’Hearn, to ‘be prepared all the time, and that we’re not afraid having you face a lefty. But understand that if we can create a way to set you up better, we’re open to whatever we have to do.’”

Worthy also writes about how Alex Gordon has mentored Hunter Dozier in his transition to the outfield.

Daniel Lynch reacts to his short start against the Angels.

“I think I was a little bit amped up,” Lynch said. “First guy, I walked him and then I felt like I made some pretty good pitches in the second at-bat. He just fought, broke his bat and he doesn’t put the ball in play. He had a really good at-bat. I felt like I made a good pitch to him 2-2, but, you know, I’ve got to come back and make a pitch there. I felt, obviously, not the sharpest, but I felt good about how I battled and made some pitches when I needed to.”

Jesse Hahn talks about being back on the mound.

“At first I think I was a little rusty, shaking off a couple years of rust,” Hahn said. “Now, I’ve become pretty comfortable with everything. Every pitch for me right now feels comfortable in my hand. For a while there I was struggling finding my slider. I felt like I lost my slider a little bit. Today, I felt like I threw some good one. Even though I gave up a hit on one, it was kind of the shape that I wanted to see in it.”

That’s why, although Kowar has proven his plus changeup can stifle both righties and lefties, his fastball can crash into the catcher’s mitt wherever it’s set up. Scouts, however, have often asked about Kowar’s third pitch, the curveball.

The pitch, of course, was Kowar’s focus in his workouts this offseason. The biggest hurdle now: confidence in the pitch.

“It’s definitely rising,” Kowar said. “Last year was big because, in pro ball, it’s different. You’re developing, so you’re allowed to throw (however many) breaking balls. … Doing that last year and having the ability to throw it a bunch has given me confidence.”

Flanny has ten questions to get to know manager Mike Matheny.

Alex Gordon is eager to finish his career in Kansas City.

The Blue Jays offered Mike Moustakas a multi-year deal before the Reds signed him.

The Angels fire a clubhouse manager for giving visiting pitchers a sticky substance.

MLBPA has expanded their grievance against the Marlins and Rays.

The outfield nightclub at Marlins Park in Miami will close.

The coronavirus has raised questions about MLB’s series in London this year.

Will cheating ruin the Paralympic Games?

How a shipwrecked crew survived ten days at sea.

The dominant cheerleading program in the documentary Cheer is only competing against one other school.

The new FX show Devs will break your mind.

Your song of the day is Art Farmer with Stupendous-Lee.