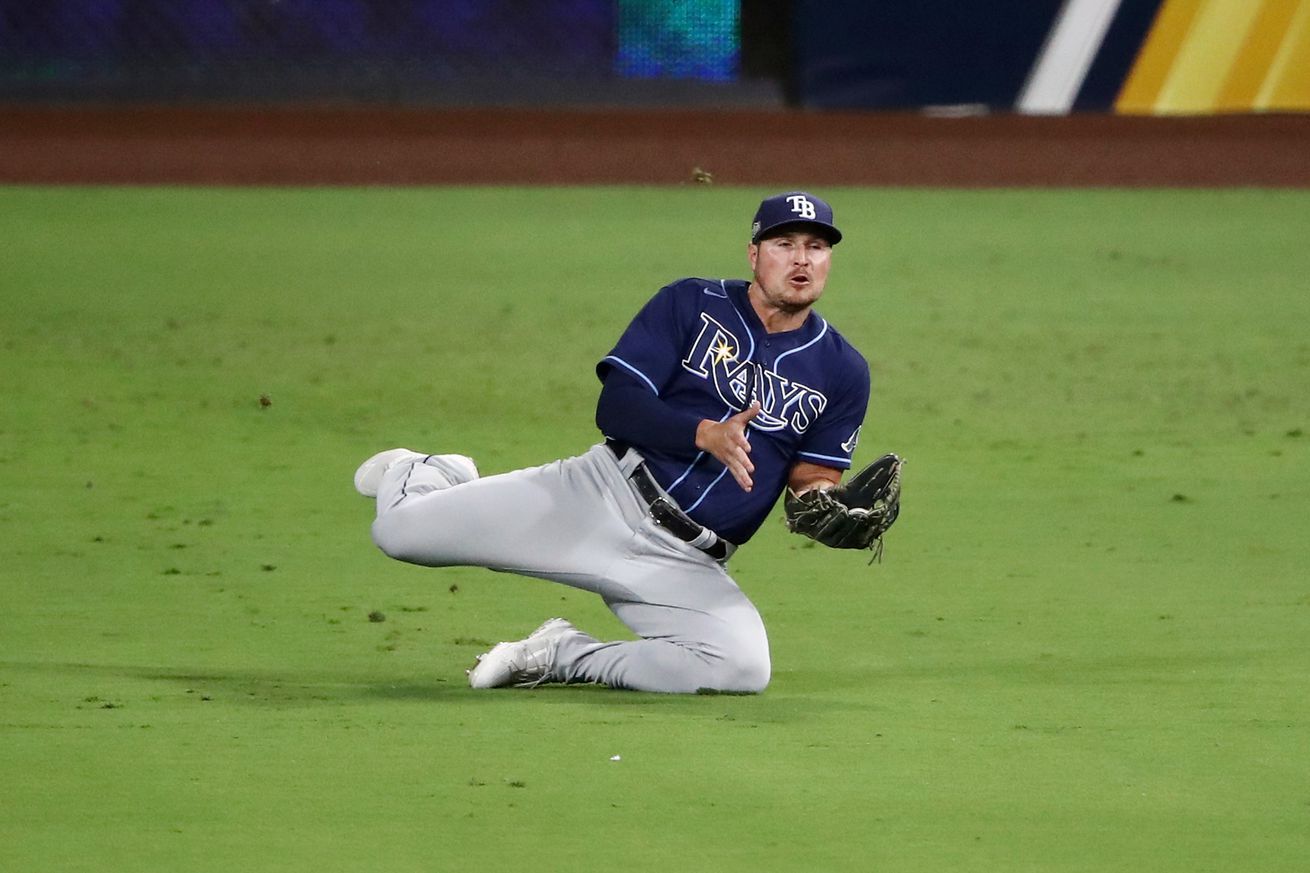 Hunter Renfroe #11 of the Tampa Bay Rays makes a diving catch to out Kyle Tucker #30 of the Houston Astros during the eighth inning in Game Three of the American League Championship Series at PETCO Park on October 13, 2020 in San Diego, California. | Photo by Ezra Shaw/Getty Images

When you turned off a Kansas City Royals playoff game in 2014 or 2015, you knew what would happen if someone hit a ball into the outfield gap with enough air under it: no matter how unlikely, somebody would probably catch that ball. It was inevitable. Lorenzo Cain, Jarrod Dyson, and Alex Gordon were a veritable black hole where baseballs went to die. And Mike Moustakas’ “I can’t catch it for you but I can catch you” dive is at least as great as anything the outfield did.

(the Spanish version of the Gordon catch is the only high quality one on YouTube, but then again Spanish announcers are great so there’s no downside there)

Kansas City’s defense in those playoffs was reflective of their defense in the regular season. Over those two years, the Royals were definitively the best defensive team in baseball. They combined that with what was also the best bullpen in baseball and backed that up as the league’s most prolific base stealing team. If the Royals had the lead by the time the sixth inning came around, you could go ahead and close the book—that game was over. And if the Royals were behind? They kept the line moving. They stole bases with wild abandon, and they struck out less than any other team in baseball.

The home run is probably the most exciting individual event in sports. It’s the one event in baseball that’s guaranteed to put at least one run on the board. And it’s exciting, what with the crack of the bat, the anticipation as everyone waits to see if it’ll go over the fence, and the release when it happens and the trot starts. But too much of a good thing sort of ruins that thing. Home runs have ballooned to frankly ridiculous levels. Kansas City hit 162 home runs in 2019, which was third worse in the league. In 2015, it would have been right in the middle of the pack. And in 2010, it would have been top ten in baseball.

That’s why it’s just so gosh darn exciting exciting to watch the Tampa Bay Rays. Because, if you haven’t been paying attention, their defense has looked like this—and this is just Game 3!

Sure, there’s some luck involved, but there’s luck involved in every series. The fact is that the Rays have turned the sharp and pointy expecting batting average by their opponent, the Houston Astros, into a soft and fuzzy Kirby plush doll through fantastic positioning and defense.

The Astros are 0-3 in this series.

The similarities to the 2014-2015 Royals don’t just stop there. The Rays have a nasty bullpen that has been the best in baseball since 2019. And while not quite at the tippy-top of the stolen base leaderboards, the Rays have the fifth-most stolen bases in baseball since 2019. In other words, they’re a fast, middling-power team with a shutdown bullpen, lockdown defense, and plenty of homegrown players. Sounds familiar.

But maybe the biggest reason why I’m rooting for Tampa Bay is because they are a true small market team. Small market teams can and often do well, but small market teams rarely have the talent to go that last mile to the championship because of the disparity in revenue. Large market teams that can command larger contracts for their televised games have dominated World Series victors. Take a look at the Nielsen television market size rank and the World Series winners over the last decade and a half:

And, really, isn’t that what it’s all about? The Royals hadn’t won in 30 years when they came home with the title in 2015. The Rays have never won a World Series in their 25 years of existence. That’s something worth rooting for. We saw the Washington Nationals get their first title last year. For the Rays to get their first this year would simply be a good thing in a year bereft of many good things.