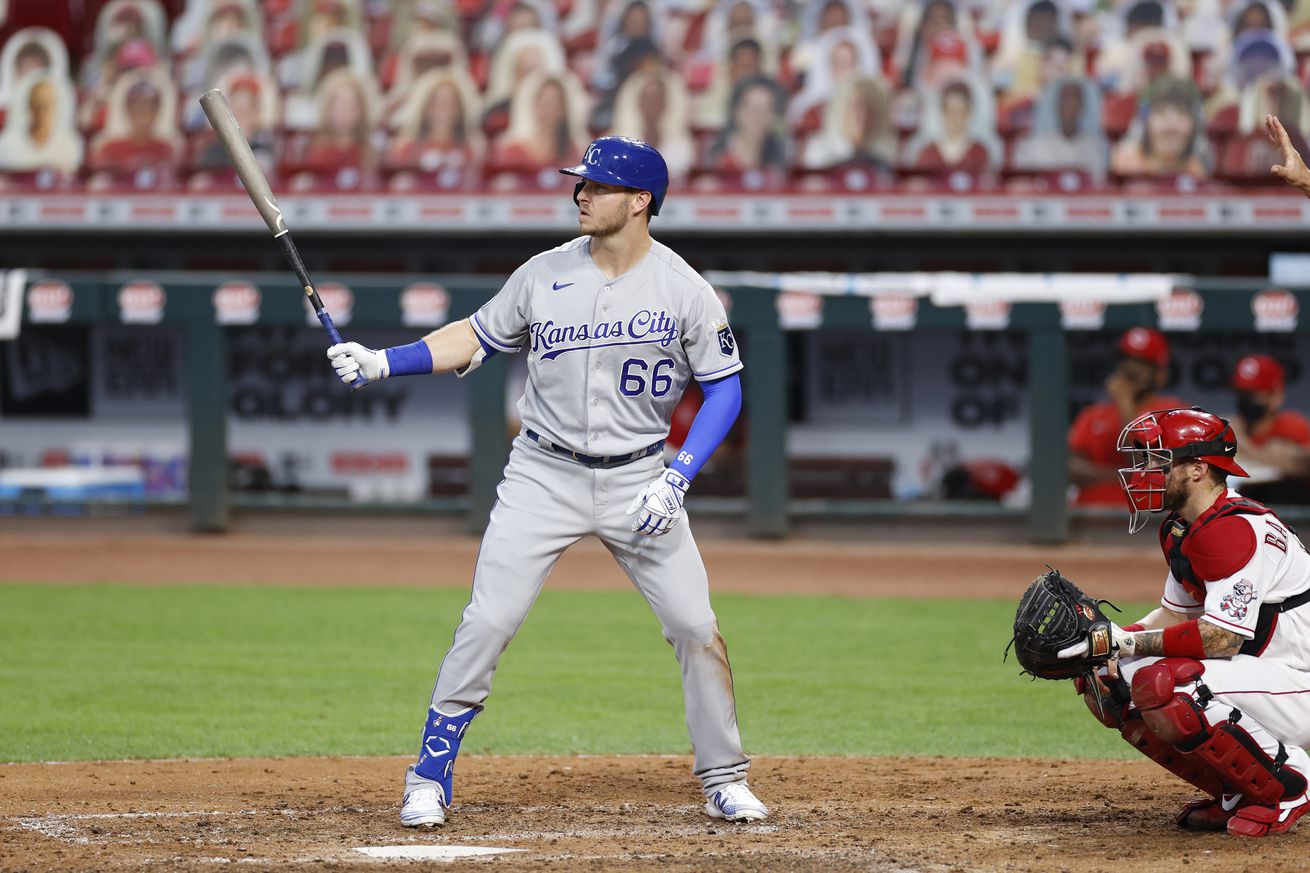 Ryan O’Hearn #66 of the Kansas City Royals bats during a game against the Cincinnati Reds at Great American Ball Park on August 12, 2020 in Cincinnati, Ohio. The Royals defeated the Reds 5-4. | Photo by Joe Robbins/Getty Images

It’s just a matter of time before we say goodbye

Not all positions in baseball are equal, because some require greater defensive skill than others. As a result, the offensive demands of each position are different. This is baked into those fancy advanced metrics like Wins Above Replacement, which credits catchers, shortstops, and center fielders for playing difficult positions.

When Ryan O’Hearn tore up the major leagues in his 2018 debut with the Kansas City Royals, he elicited plenty of raised eyebrows. Mere days after his 25th birthday, O’Hearn hit a home run in his big league debut. He would hit 11 more in the additional 43 games he would play that year. In addition to his power, O’Hearn walked at an 11.8% clip, and hit 53% better than league average in his rookie season.

Since then, O’Hearn has simply not hit, and not even a team like the Royals can weather a first baseman who hits 30% worse than league average like he has since the start of 2019—nearly 500 plate appearances worth of data. In hindsight, O’Hearn’s 2018 was nothing but a small sample size mirage. O’Hearn actually put up a pedestrian .742 OPS in his first 13 games before hitting like an All-Star with a .294/.384/.642 triple slash over his last 31 games. Last year, O’Hearn put up a nearly identical .297/.376/.649 triple slash over his last 28 games.

It’s clear that O’Hearn has the talent to hit well in spurts, and being a streaky hitter does not necessarily bar you from being a productive big league hitter. But O’Hearn just encountered too many problems in aggregate. He is unplayable against left-handed pitchers. He does not hit for nearly enough average for his high walk rate to really matter. In addition, he hits too many ground balls, preventing him from accessing more of his above average power.

After three seasons and over 650 plate appearances, O’Hearn has hit 10% under league average. He is a poor defender at first base, and both Defensive Runs Saved and Ultimate Zone Rating consider him to be one of the worst defensive first basemen in the league. He isn’t terribly slow, but is nevertheless a liability on the basepaths. All told, he has been worse than replacement level per Fangraphs’ Wins Above Replacement.

Unlike many of the so-called Quad-A players that succeed in Triple-A but can’t cut it in the big leagues, O’Hearn was relatively young when he debuted. He just turned 27 at the end of July. But age is only part of the equation, and it’s not like O’Hearn has a bunch of projection left in his frame. Regardless, “He’s still not that old” is the motto of crappy teams who don’t have legitimate prospects as a point of comparison, the motto of teams who are trying to convince themselves that their players still have upside.

To be perfectly frank, O’Hearn is part of the reason why the Royals have been a 100-loss team for three years. It has been completely worth giving O’Hearn a long trial run to see if he can work. But if the Royals want to win games, they need to move on from these guys towards legitimate young prospects.

The Royals have already been doing so. When Jorge Soler went on the disabled list, O’Hearn did not receive more time at DH. Hunter Dozier has only played the outfield three times since the start of September and has effectively been the full-time first baseman since September 3. Receiving O’Hearn’s playing time has been Edward Olivares, the 24-year-old outfielder acquired by Kansas City for Trevor Rosenthal.

Backing up Dozier’s apparent new role as the full-time first baseman was Kansas City’s decision to ship Ryan McBroom to the alternate site. Along with the DFA of Matt Reynolds, Kansas City called up 26-year-olds Kelvin Gutierrez and Nick Heath. All told, the decisions indicate a desire to move forward with the players that have a track record of production, such as Dozier, and players with athleticism and defensive skill, like Olivares, Gutierrez, and Heath.

So while O’Hearn is still here for now, it’s only a matter of time before the Royals will move on. I would have loved to see O’Hearn emerge as the no-doubt first baseman of the future, but the Royals seem to have decided that he is not. With O’Hearn’s personal performance and the team’s winning percentage over the last few years, it’s hard to argue with them.