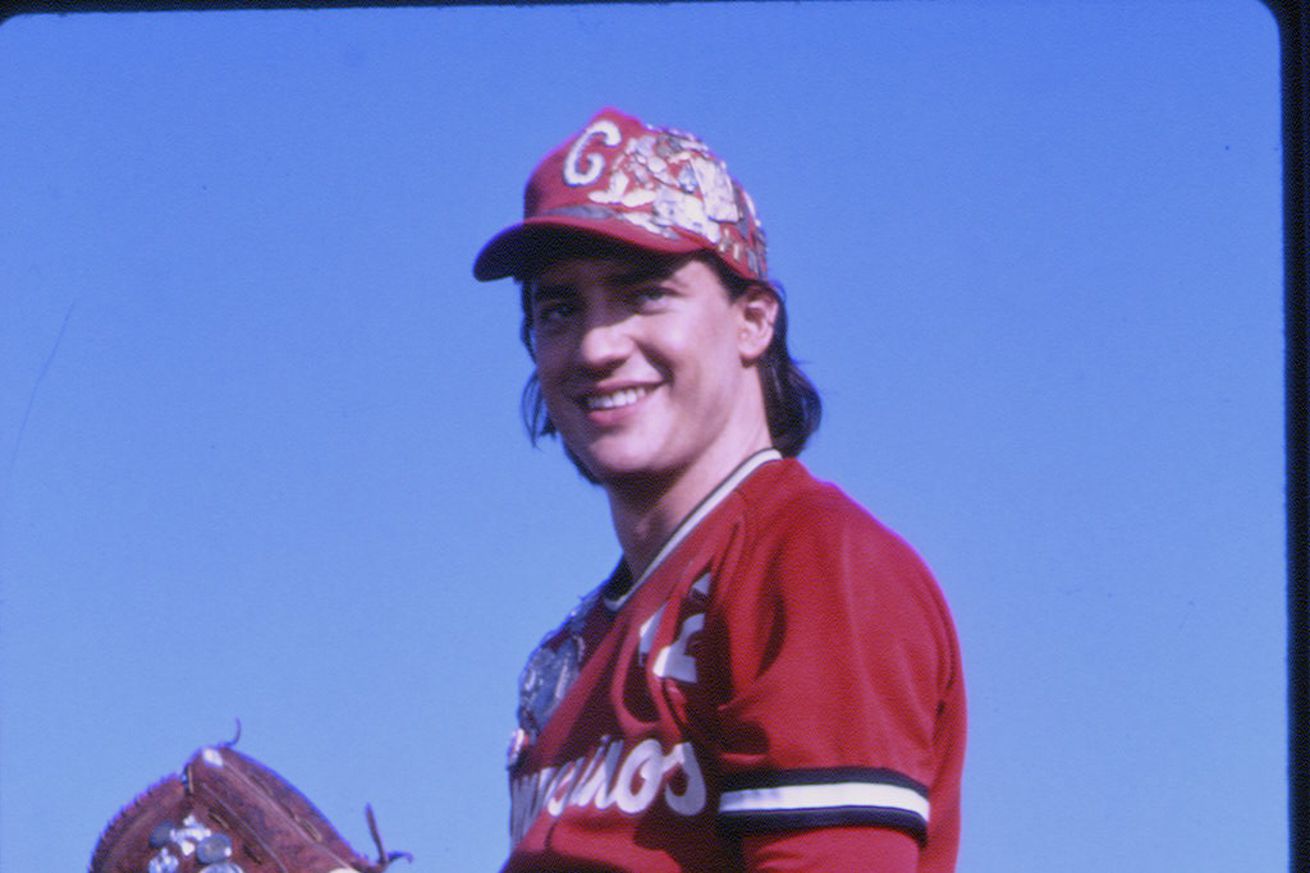 Brendan Fraser stars as Steve Nebraska in this “comedy.” | Photo by Frank Trapper/Corbis via Getty Images

There was something about 1994. Something decidedly not good. I am forced to assume that the baseball strike temporarily (and retroactively, since movies premiered in 1994 would have been written and filmed before 1994) caused everyone to forget what the heck the sport of baseball even was. Hopefully, you read my review of another 1994 baseball movie, Angels in the Outfield. But even if you didn’t, all you need to know is that the movie, while charming and fun in a lot of ways, has no idea how the sport of baseball or even reality works.

Unfortunately for The Scout, that last thing is all they have in common.

I’m not even 100% convinced that The Scout is a movie if we’re being honest. If you remember my review of Bull Durham, you’ll recall that one of my disappointments with the film was a lack of focus on character development. This movie has the same problem, only worse. So far as I can tell, there are no characters in this film so much as archetypes. The star of the movie is Albert Brooks as the titular scout, Al Percolo. Al is a scout who is willing to say or do anything if it will help him get a talented player onto the roster of the Yankees, the team he works for. But at the beginning of the film, he convinces the GM to draft a guy who ends up panicking and throwing up on the mound when it comes time to make his major league debut. The GM gets mad and sends Al to a farther part of Mexico than anyone has ever sent scouts before.

While he’s down there he accidentally bumps into Steve Nebraska, played by Brendan Fraser before he’d hit it big as an action star, much less had his career derailed by injuries. At this point in his career, he was still only allowed to play roles in which he came from an “uncivilized” place and had to be taught how to interact with society. And, yeah, that’s the role he plays, here, too.

And…that’s basically it. Lane Smith plays Yankees’ GM Ron Wilson and Dianne Wiest plays psychiatrist Dr. H. Aaron but they aren’t even archetypes. They just fill in holes and deliver lines to keep the plot, such as it is, moving. Michael Rapaport appears as Tommy Lacy at the very beginning of the movie before going on to do much better things. The movie did bring in a lot of real major league talent, though. Bobby Murcer, Steve Garvey, Tom Kelly, Reggie Smith, Bob Tewksbury, Ozzie Smith, Ken Brett, and Bret Saberhagen all appeared as themselves in the movie. Hernandez and Saberhagen both make demands for money that, in retrospect, make me wonder if too much money was dedicated to bringing in big-league stars for this movie instead of on the writing.

The problems with this movie are multitudinous. Let’s start with the social issues. If you don’t like reading about such things, just go ahead and skip down to the next paragraph. Unlike how Mr. Baseball ended up treating Japanese culture with respect, The Mexican baseball league and the people of Mexico are treated as an enormous joke that isn’t even funny. Also, the movie mocks mental health issues such as the panic attacks that Tommy Lacy and Steve Nebraska both appear to endure. Dr. Aaron attempts to convince Al of the severity of the issues that Steve is enduring, but Al makes light of them or ignores them. And it never really comes back to bite him, either. She also initially recommends that Steve not be allowed to play baseball before eventually allowing herself to be browbeaten into writing a letter saying he’s cleared to do so. This paints the psychiatric profession in a terrible light as she’s otherwise presented as a competent and caring doctor. There are a slew of obvious issues – from allowing Al to stay in her interview with Steve, to diagnosing him with a major mental health problem in less than five minutes, to breaking HIPAA laws in giving Steve’s medical information to Al without receiving permission to do so – but the one that concerns me the most is when she decides that because she thinks Steve might have a medical issue her first instinct is to forbid him from playing baseball. It makes it seem like therapists and psychiatrists might be willing to insist you stop doing things you love for no real reason other than “being a doctor” and might discourage people from seeking the help they need.

With that out of the way, we can focus on the baseball issues of the movie. Scouts and front office personnel from around the sport witness three pitches from Nebraska, all close to 110 MPH, and then as a batter they see him hit three home runs – two from the right side, one from the left. This immediately causes everyone to become convinced he is the greatest player of all time. Never mind that the sample sizes seen were so small that I’m not even sure Ant-Man could see them in the Quantum Realm. The Yankees immediately give $55 million to play for them. That was a cartoonishly large amount of money in 1994. It’s unclear how long the contract was for, but Bobby Bonilla was the highest-paid player in 1994 and he made only $6.3 million. But to add to the cartoonishness, the Yankees have no desire or plan to have him play in the minor leagues at all. They want to insert him directly into their big league rotation. And here, as in Angels in the Outfield, was get one of those sarcastic remarks from someone about a team winning the pennant before something will happen. Only this time he follows through; Al promises that if the Yankees make the World Series (something treated as laughable because they haven’t done it in ten whole years) that Steve will pitch the first game. After some drama, Steve does pitch the first game.

He pitches a perfect perfect game with 81 pitches and 27 strikeouts.

Setting aside the impossibility of such a performance in general – I don’t care if you throw 110, someone in a World Series lineup will get the timing well enough to foul one off – there’s no way the fictional Cardinals team would have permitted it to happen. Maybe – maybe – in a regular season game if you saw a pitcher throwing like that the unwritten rules would keep you swinging normally and let him have a fair shot at pulling off some incredible feat. But this is the World Series. You can’t give a game away because the pitcher looks unhittable. Someone would have squared around to bunt or tried to lean over the plate and take one for the team. It’s just dumb.

As we saw in Angels in the Outfield, you can get away with some dumb baseball if your movie is aimed at kids and it’s really about something else than baseball. And while this movie is not aimed at kids – the “humor” just isn’t silly enough and the characters aren’t bold enough to appeal to them – it also isn’t about baseball. So what is it about? Well…it wants to be about father-son relationships. Steve’s issues stem from the abuse he received as a child and he views Al as something of a father figure. But…that’s as far as it goes. Al does not, at any point, want to be a father figure to Steve. He just wants to be cash in on discovering him. That motivation doesn’t change for the entirety of the film. Even at the very end, when Al stops demanding that Steve go play baseball, it’s clear that he’s not doing it because he cares about Steve. He’s doing it because he feels as though he will never be able to convince him so there is no reason to continue fighting. It’s an act of surrender to inevitable destruction, not of love.

Steve’s character is also undone by writing. He’s supposed to be kind of a lovable goofball. But that’s entirely undercut after he picks up a reporter in a rage for taking too many photos during the first press conference and after Dr. Aaron warns Al that Steve may become violent due to his traumatic history it is very difficult as an audience member to laugh at the silliness for fear that at any moment it could turn to brutal violence to pay off that foreshadowing. It never does, which is both a relief and an issue. Why bring it up at all? Was it supposed to add to the humor? If so, the ‘90s were far scarier than I remember.

Ultimately this “movie” fills 101 minutes with nothing. Not just nothing worth watching or nothing worth caring about but almost literally nothing. It’s a bunch of light and noise that isn’t communicating anything, won’t make you feel anything, and goes nowhere. I’ve seen more narrative direction and funnier comedy in the static of an old TV. Please learn from my mistake and do not, under any circumstances, watch this film.