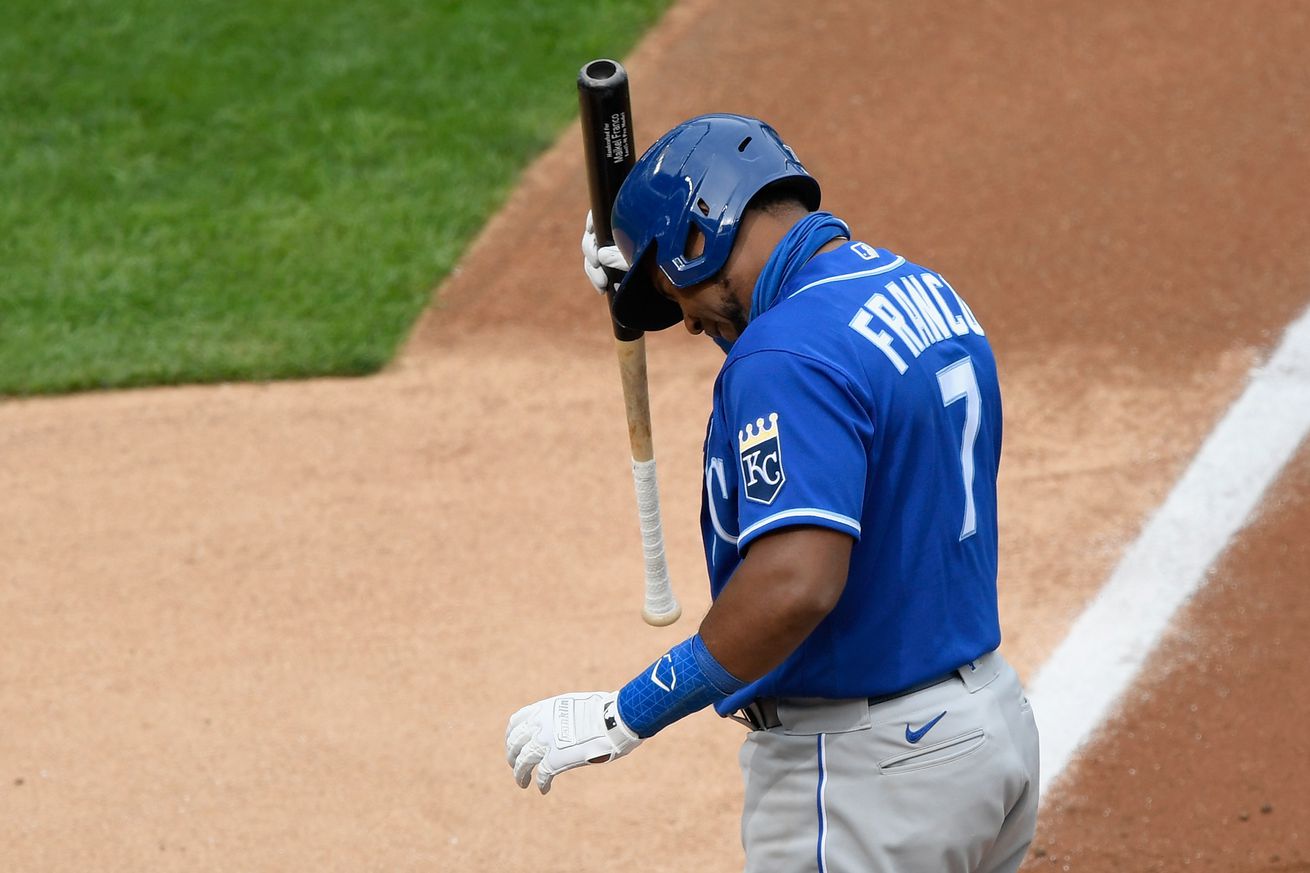 In Sunday’s rout over the Pittsburgh Pirates, the Royals came to the plate with the bases loaded six times. Here’s how they did in those situations.

Overall, they went 1-4 with five runs scored with the bases full. Undoubtedly, they were the beneficiaries of a Pirate pitching staff that couldn’t locate the plate to save themselves. (The Royals drew eight walks in the game, tying their season high set last month against the Reds.) They could’ve done better—one hit in four at bats with the bases loaded isn’t all that great—but it sure feels like they took what the Pirates gave them. Cashing in five runs in that situation isn’t all that bad.

What’s notable about the above is they got any production at all with the bases loaded. They’ve been brutal in that situation in 2020.

With this performance the Royals:

This, dear reader, is underscores the abysmal performance the Royals have seen from their offense when they have loaded the bases. Overall, they are hitting .088/.195/.088 with the sacks juiced. Pick a slash and that’s the worst in the league and it’s not even close. No other team has scored fewer than 17 runs with the bases loaded in 2020. The Royals finally broke through to double-digits on Sunday.

So yes, it’s notable when the Royals are so much worse in that situation simply because… it’s kind of difficult to do.

It’s not simply enough to note that the Royals have been atrocious when it comes to production with the bases loaded. This is 2020, after all, and every article about any statistic needs to come with some sort of Covid asterisk. Strange days lead to strange results. Yes, the Royals are bad when they hit with the bases full. Whatever, it’s a 60 game season, right?

Here’s a look at the worst teams since the dawn of the divisional era (1969) with the bases loaded. It’s sorted by sOPS+. (Measuring the OPS+ against that particular split.) Yes, the Royals place on this list is absolutely historic.

There are a lot of bad teams on this list. Hello, 2002 Detroit Tigers! Good to see you, 2012 Houston Astros! Bad offense is bad offense so it’s not like you would expect a team that scuffled to score runs to all of a sudden put up a Herculean effort with the sacks full. But there are also some really good teams present. The 2020 Dodgers score more runs than just about any team. Imagine if they produced at around a league-average rate with the bases loaded. The 1981 Yankees (a nice comp in another abbreviated season) won the AL pennant. However there’s no mistaking what overall category the Royals occupy. They are—and let’s be honest here—a bad offense. They score 4.22 runs a game, below league average by about half a run. Their team OBP is .308, which ranks 24th. Their wRC+ is 93, which ranks 22nd.

But nothing, nothing, indicates they would be—or should be—this horrible with the bases loaded. You know how, when you’re watching a game and a team has runners on all the bases you move to the edge of your seat and pay a little closer attention? There is high potential that the calculus of the game is about to shift. But when it’s the Royals, you almost hate to see it? You think home runs are rally killers, what about when the Royals load the bases? My goodness.

Merrifield collected the Royals’ lone hit with the bases loaded on Sunday, so let’s look at how individual hitters have done in that situation. Again, sorted by sOPS+.

So Ryan O’Hearn is the only guy who has done a damn with the bases full. Four runs scored on two hits in six plate appearances. Merrifield as noted previously drove in a pair on Sunday with his bases-loaded single. He’s also drawn a walk. Lopez has now drawn two walks with the bases loaded and he’s been hit by a pitch!

Do you notice a couple of names missing? Jorge Soler and Salvador Perez both have yet to come to bat with the bases loaded in 2020. A statistical anomaly to be sure, although both have missed time on the IL. You would think the Royals’ overall performance wouldn’t be quite so brutal if those two had a few plate appearances in that situation.

We figured there would be some bizarre statistics in 2020, especially when diving into the splits (always a dangerous game) and this is one of those instances.

Yet the average team has scored around 34 runs with the bases loaded this year. The Royals have plated 14. Add 20 runs to their total (which is possible given the Twins have the same number of plate appearances with the Royals with the bases loaded this year, but have scored 39 runs) and their average runs per game jumps to 4.64 R/G. That’s still not league average (this team has other offensive deficiencies, you know) but gets them to within shouting distance.

So if you’re looking for something to watch over these last two weeks as the Royals play out their string, maybe focus on this. Can they produce with the sacks full? Can the Royals push their sOPS+ into positive territory, avoiding being the only team in the divisional era with a negative number? As the season draws to a close, we’ll continue to shift to the edge of our seats when the Royals load the bases.