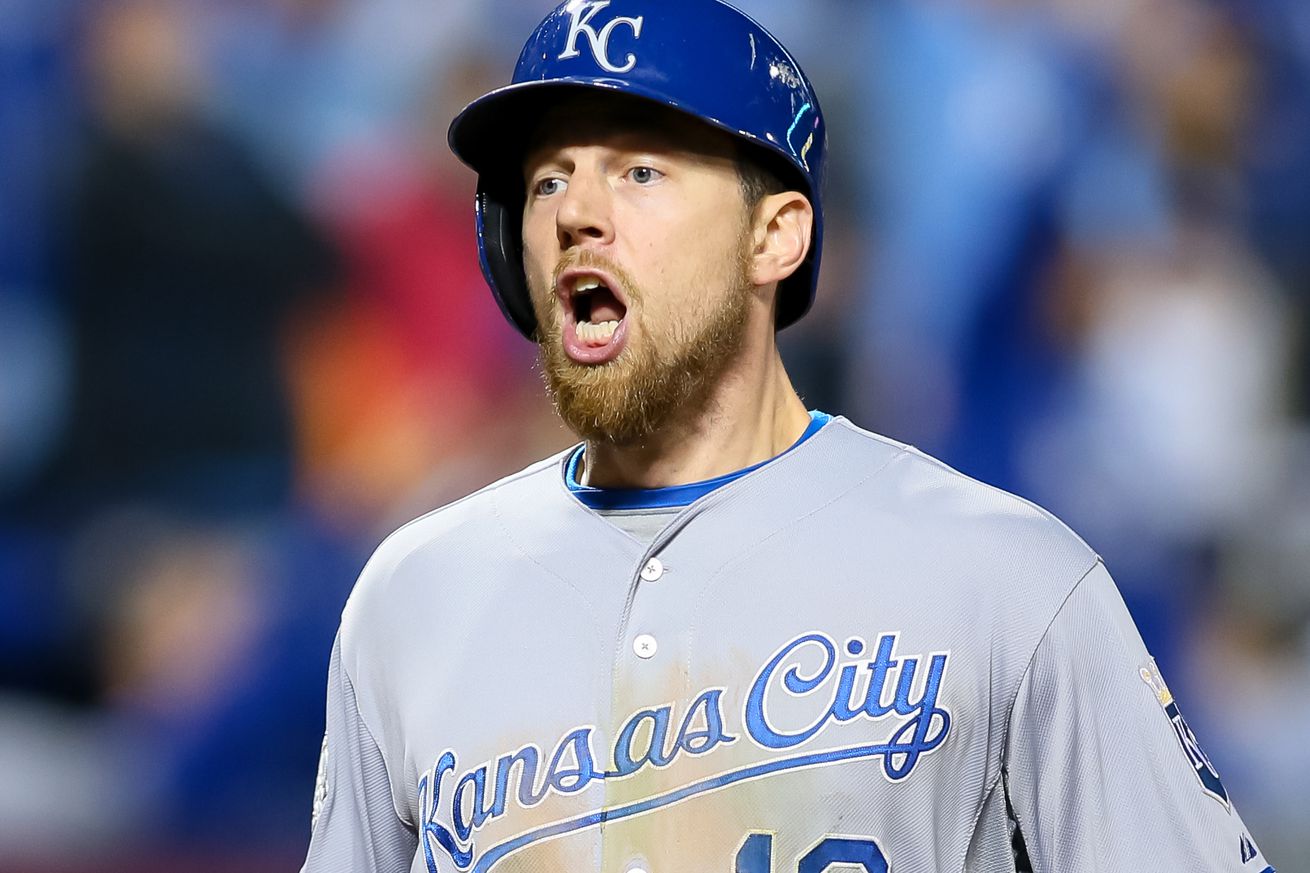 Their time in KC was brief, but brilliant.

In Kansas City, we are familiar with players being here for only a brief amount of time. Back in the 50s, it seemed players were only here temporarily as punishment to play for the KC Athletics before they would be summoned back to the Yankees after they had served their penance. In the early days of the Royals, players spent their entire career in Kansas City, but once the Kauffman family passed on, the team couldn’t afford to keep their stars here very long.

But rarer still is the one-and-done. A fixture in college basketball, it is not so often for a good player to be with a team for just one year. However it has happened a few times for the Royals. Let’s take a look at the best players who spent no more than one season in a Royals uniform.

When Salvador Perez went down with a season-ending surgery in spring training last year, the Royals were left scrambling to fill a huge void. Luckily for them there was still a Gold Glove-winning catcher still available on the free agent market, so the Royals scooped up Maldonado for a cheap one-year deal. Maldonado couldn’t replace Salvy’s bat – he hit just .227/.291/.366 with six home runs in 74 games. But he continued solid defensive play, and by framing metrics was an upgrade. The Royals were able to flip him mid-season to the Cubs for pitcher Mike Montgomery.

Minky had a reputation as an excellent defender at first base, but was always underwhelming with the bat, and just a year after catching the final out for the first Red Sox championship in eight decades, he was left with few offers. The Royals signed him to a one-year, $1.85 million deal to be their starter at first, and he was pretty solid, hitting .283/.359/.411. Although he hit just four home runs in 91 games, he got on base enough and played terrific enough defense to be worth 2.2 WAR before leaving for the Yankees the next year.

The 2015 Royals were cruising in first place only to suffer a major blow in early July when Alex Gordon injured his groin attempting to catch a fly ball in left field. It was the first time in the age of the modern July trade deadline that the Royals looked like a really solid championship contender, so it was exciting for Royals fans when the team pushed their chips in and traded top pitching prospect Sean Manaea for Athletics utility player Ben Zobrist. The switch-hitter was sensational for the Royals, hitting 284/.364/.453 with 7 home runs in 59 games and filling in all over the infield. He endeared himself to fans and was huge in the post-season, hitting .303 with a pair of home runs.

Bell looked like a mild-mannered accountant rather than a ballplayer, and early in his career he hit like it. Before the Royals acquired him in 1997 he averaged just 11 home runs per 162 games. But he enjoyed some power later in his career, as the Royals would find out once they made a blockbuster deal to get him and first baseman Jeff King from the Pirates for Joe Randa and three other players. Bell hit a then-career high 21 home runs that year, still the most ever by a Royals shortstop. He scored 89 runs, drove in 92, and drew 71 walks, and his 5.4 WAR that season was the third-most by any shortstop, behind only Nomar Garciaparra and Alex Rodriguez, and ahead of Yankees captain Derek Jeter. Bell would depart for the Diamondbacks that winter, where he would smack and insane 38 home runs.

Gregg Jefferies was a much-hyped phenom at an early age, becoming the first two-time winner of Baseball America Minor League Player of the Year, and also becoming the first player ever to win Rookie of the Year votes in two seasons. He was expected to win batting titles with the Mets, and when he was simply mediocre and couldn’t live up to the hype, they decided to ship him to Kansas City in a blockbuster with Kevin McReynolds and Keith Miller for Royals ace Bret Saberhagen and infielder Bill Pecota. Defensive had always been an issue for Jefferies, so the Royals moved him from second to third, but he struggled there with 26 errors and poor range. His bat wasn’t bad – he hit .285/.329/.404 – but it wasn’t enough to overcome his liabilities, so the Royals shipped him to St. Louis for outfielder Felix Jose after just one season.

The Royals had coveted Gibson in 1987, but suddenly withdrew their interest, one of the clearer indications that owners were colluding against free agents. They finally got their manas a free agent in 1991, but Gibson was past his prime and battered by injuries. Still, the 34-year old provided some much-needed power at first, getting off to a great start. But his shaky defense was a liability in the spacious ballpark, and his bat slumped in the second half. He did finish second on the club with 16 home runs, but hit .236/.341/.403 and was worth just 0.7 WAR. New manager Hal McRae told Gibson in spring training of 1992 he wouldn’t be a starter, so Gibson asked for a trade and got it, being shipped to Pittsburgh for lefty reliever Neal Heaton.

The Royals were looking to be more competitive in 2009, so they dealt reliever Ramon Ramirez to Boston for speedy center fielder Coco Crisp. Crisp seemed like a good fit – he was just 29 years old, had some experience with winning teams, and his defense was well-suited for Kauffman Stadium. He aimed for swiping 50 bases with the Royals, but injuries limited him to just 49 games and 13 steals. He hit just .228/.336/.378 but was still worth 1.4 WAR through his on-base skills, speed and defense, but the Royals decided to decline his $8 million option. He went on to Oakland where he did lead the league with 49 steals and later played against the Royals in the 2014 Wild Card game.

The Japanese-born Aoki seemed tailor-made for what the Royals liked, a slappy left-handed hitter who was adept at putting the ball in play and making something happen. The Royals picked him up from the Brewers for pitcher Will Smith, but through the first half of the season, the move looked like a bust. Aoki went down with an injury in late July and was hitting just .263/.326/.324 at the time. He would return in July a different player, hitting .310/.375/.402 the rest of the season as the Royals made their unlikely charge towards the playoffs. His sacrifice fly in the bottom of the ninth tied the Wild Card game, and he would have some clutch hits and catches in the ALDS against the Angels. He would then sign with the team that had defeated the Royals in the World Series – the Giants.

The Royals had been looking at Davis for a decade, with rumors in the late 80s they were going to deal Mark Gubicza to the Giants for the then-San Francisco outfielder. By 1997, Davis was with the Angels, mostly confined to DH-duties, but the Royals were finally able to move Gubie for him. Even at age 37, Davis was still a very good hitter, becoming just the eighth hitter in club history ever to reach 30 home runs. He hit .279/.386/.509, but didn’t want to stick around on the 94-loss Royals. He departed to sign with the Yankees, where he would win two championship rings in the next two seasons.

The Royals got Johnson from the Mets in 1969 in a ridiculously lopsided trade with outfielder Amos Otis in exchange for third baseman Joe Foy. Otis became one of the greatest players in franchise history, but Johnson was pretty good too, finishing tenth in the American League with a 3.07 ERA and third in strikeouts with 206 in just 214 innings. he was so valuable, the Royals were able to flip him after just one year in another lopsided deal with infielder Jackie Hernandez and catcher Jim Campanis to the Pirates for shortstop Fred Patek, pitcher Bruce Dal Canton, and catcher Jerry May.

The Royals were looking to “flip the switch” and combine some solid veteran pitchers to go along with a promising young lineup in 2013. Before they made their big blockbuster deal to get Rays starter James Shields, they made a shrewd pickup to get Ervin Santana from the Angels for pitcher Brandon Sisk. The Angels were looking to dump Santana’s salary after a poor 2012 season and were going to decline his option anyway until the Royals offered to take him. Santana would end up putting up a solid 3.2 WAR season with a 3.24 ERA in 211 innings. He tried to parlay that into a $100 million contract, but because he would cost his new team a draft pick, he went unsigned until after June, when he latched on with the Braves.

Royals fans got excited about the mid-season acquisition for Ben Zobrist, but it was the “chips all in” deal for a big name pitcher like Johnny Cueto that really got fans excited for the 2015 pennant push, to the point of inspiring songs and music videos. The Royals gave up a trio of pitchers, including 2014 first-round pick Brandon Finnegan in exchange for the All-Star who was coming off a 20-win season. Cueto dazzled with a complete game shutout in his first Kauffman Stadium start, but his short stint in Kansas City was a mixed bag. Cueto had a 4.76 ERA in 13 starts, but had a dominant performance in a pivotal Game 5 against the Astros in the ALDS, then tossed a complete game in Game 2 of the World Series against the Mets.

Rapp had begun his career with the Giants before the Marlins took him in the 1993 expansion draft. He was a solid back-of-the-rotation starter for a few seasons, leading the league in losses with 16 in 1996. In 1998, the pitching-starved Royals brought him to town on a one-year, $800,000 deal. He finished second on the team with 12 wins and despite 107 walks and a 5.30 ERA, he was a 1.6 WAR pitcher. Rapp would double his salary the next year in Boston.

Although the signing of former Braves pitcher Kris Medlen didn’t really work out, Dayton Moore tried again by bringing in Mike Minor on a two-year, $7.25 million deal in 2016, with much better results. Minor was recovering from labrum surgery and missed the entire 2016 season, but when he returned he was fantastic. The Royals had him come out of the bullpen for the first time in his career, and in 65 appearances he posted a 2.55 ERA with 88 strikeouts in 77 2⁄3 innings. The performance was impressive enough for him to land a three-year, $28 million deal with Texas the next season.

Madson had one been a solid reliever with the Phillies for many years, including their championship season in 2008. But by 2015 he had been out of baseball for three seasons, his career seemingly over. Royals special advisor Jim Fregosi, Jr. had a relationship with Madson and after having him tutor a high school player, he asked Madson if he was interested in playing again. Madson made the Royals as a minor league invitee and became a go-to arm out of their vaunted bullpen, with a 2.13 ERA and 58 strikeouts in 63 1/3 innings.