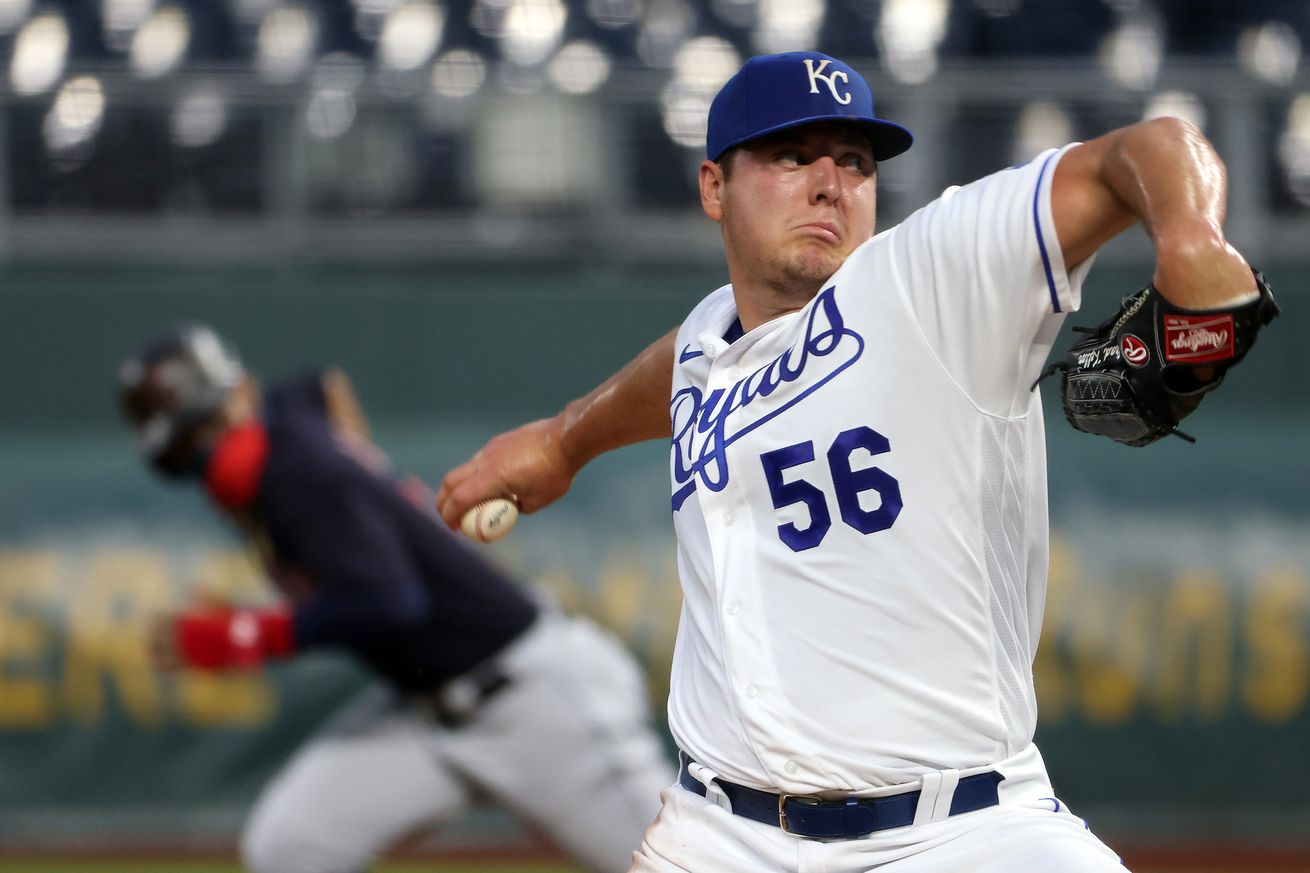 Starting pitcher Brad Keller #56 of the Kansas City Royals pitches as Francisco Lindor #12 of the Cleveland Indians breaks for second during the 1st inning of the game at Kauffman Stadium on August 31, 2020 in Kansas City, Missouri. | Photo by Jamie Squire/Getty Images

The Kansas City Royals defeated the Cleveland Indians 2-1 tonight with a comprehensive team win that included great starting pitching, excellent plate discipline, a lights-out bullpen, and timely hitting. Brad Keller pitched into the seventh inning and Bubba Starling hit the go-ahead single in the bottom of the eighth to secure the victory.

The bulk of this game was a grand old pitchers’ duel between potential American League Cy Young winner Shane Bieber and unlikely Kansas City ace Brad Keller. Bieber looked every bit like like the Cy Young candidate he was in his first matchup against the Royals, striking out nine and shutting out the Royals over six innings. Bieber allowed only one hit and allowed only one ball in play greater than 90 MPH. However, Bieber did walk four Royals, which contributed to him getting pulled in the seventh inning.

On the side of Kansas City, Keller showcased an entirely different approach. Rather than the straightforward power pitching style of Bieber, Keller stymied Cleveland batters with sinkers that resulted in a bunch of weak contact and grounders. Keller shut out Cleveland for six innings before allowing two consecutive hits to Carlos Santana and Franmil Reyes, resulting in a Cleveland run. Jesse Hahn was able to bail Keller out and no further damage was done, but against Bieber one run is sometimes too much. All told, Keller threw 6.1 innings, striking out four against one walk.

Coming into tonight, James Karinchak’s excellence was at absurd levels—picture 2014 Wade Davis, but better. His 1.02 ERA and strikeout rate of 51.5% told the story. But tonight, Karinchak just didn’t have it, with very little control and less break out of his breaking pitches than usual. Nonetheless, Hunter Dozier and Jorge Soler did well to lay off some nasty curveballs to draw back-to-back walks to kick off the eighth inning.

After Ryan O’Hearn struck out on a ball way out of the strike zone on ball three, you could sort of hear the groaning echoing around Kansas City—“not this again.” Thankfully, Maikel Franco made Karinchak pay, hitting a single to left field to score Dozier and even it up at 1-1. Adam Cimber came in to clean up Karinchak’s mess, but Bubba Starling hit a clean line drive single to score Soler and make it 2-1.

BREAKING: The line has been moved for a player to be named later.#AlwaysRoyal pic.twitter.com/gX7Pp28CTJ

Greg Holland stepped to the mound in the ninth inning to try and close it out, but the Indians did not go down without a fight. Reyes whacked his second double of the game, and Santana crushed a ball at an even 100 MPH that found Starling’s glove, but Holland struck out Naquin and induced a grounder from Josh Naylor to end the threat and earn another save.

I would be remiss in not acknowledging what Dozier is doing at the plate, which is truly impressive. Dozier drew three walks tonight, raising his walk rate to 21% on the year. No Royal with at least 80 plate appearances in a single season has ever done that.

Tomorrow, the 14-21 Royals will continue their series with Cleveland at Kauffman Stadium.