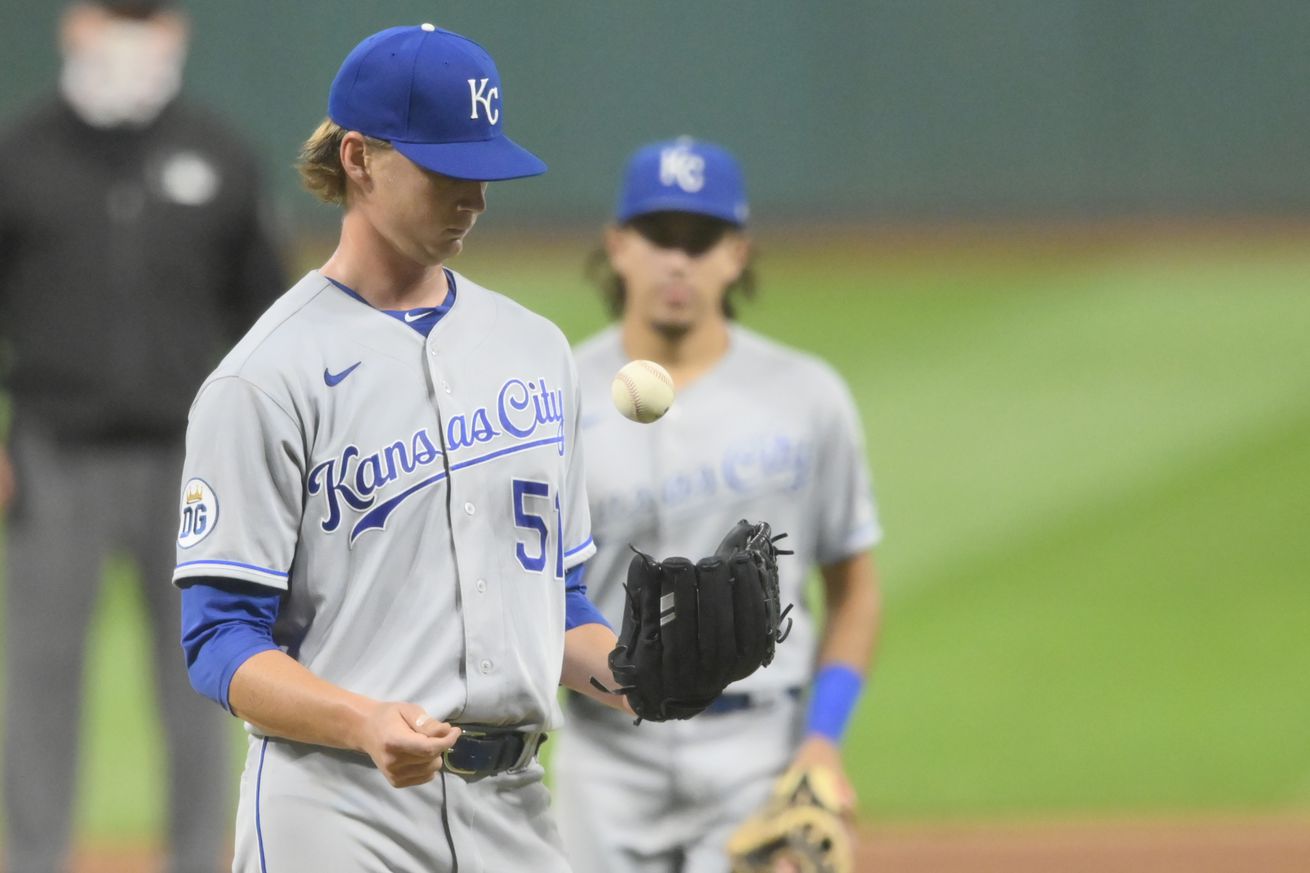 Last night was fun: Singer into the 8th with a no-no and a nice thumping of Cleveland.

Matt Harvey has been moved to the pen and rookie Carlos Hernandez will make his first career start on Saturday.

The Royals will start rookie Brady Singer, 24, on Thursday, followed by rookie left-hander Kris Bubic, 23, Friday. Similarly to Bubic, who had not pitched above High-A Wilmington in the minors before making his MLB debut, Hernandez, 23, did not pitch above Low-A Lexington until this season.

The Star’s Lynn Worthy profiles Kyle Zimmer and where he is now:

“The physical aspect of it has freed me up mentally,” Zimmer said of his success this season. “Whereas last year I think I was still trying to figure out what kind of pitcher I was because I had missed so much time and been hurt for so long. Trying to figure that out at the highest level isn’t the easiest thing in the world.”

On the latest Podcast, @jimcallisMLB and @JonathanMayo discuss the new farm system rankings and the ascent of the most improved farms — the Marlins, Orioles, Royals, Mariners, Giants & D-backs: https://t.co/bGLVoAGNnS pic.twitter.com/xTzj6oqGA9

Royals are one of the “most improved farms”? Cool. I’m going to just gloss over that it’s during a pandemic where no one’s farm teams are playing.

Greg Holland makes Mike Axisa’s list of “10 players who could be on the move” before waiver wire day on Tuesday. Sadly, there are no trades anymore so the Royals would get nothing back if he is moved.

Kansas City did well to cash in Trevor Rosenthal as a trade chip, but the club hung on to Greg Holland, who is a Royals legacy player. That said, the 34-year-old is unlikely to part of the next contending Royals team, and it seems his roster spot and remaining salary can be better used elsewhere. I don’t expect the Royals to let Holland go on a waiver claim at this point — they weirdly kept Ian Kennedy last year despite his rebuilt trade value — but it wouldn’t be a bad idea to explore the market prior to Tuesday.

No mention of the Royals in the CBS Sports article about who wins the AL Central, tho.

I got this one in my inbox. Want to go take batting practice at the Naturals’ field on Saturday? Only $5 for 15 swings.

Since we’re a little light, let’s feature Kevin O’Brien and Royals Reporter, who I normally just have in the blog bullets below. He writes once nice, long Royals story almost every day and the blog is worth a read if you haven’t seen it yet. Yesterday’s story looked at Junis’s place with the team next year.

So what kind of impact has this new change had on his pitches? Well, he’s lost some velocity on his fastball (91.7 to 91 MPH) and sinker (91 to 90.5 MPH), according to Statcast data. He also has increased the usage of his slider as well, as he went from using it 29.7 percent of the time in 2019 to 43.3 percent of this time this season. However, despite the slight velocity dip, and increased reliance on his slider, it actually has improved his fastball and sinker’s effectiveness. After generating a whiff rate of 16.4 percent and a put away percentage of 11.7 percent in 2019, according to Statcast, he has increased those rates to 18.3 and 16.7, respectively.

As for his sinker, he was posting a whiff rate of 9.2 percent and a put away percentage of 11.3 last year. This year? Those rates have increased to 19.2 and 20 percent, respectively. Granted, his slider, his premium pitch a year ago, has lost some luster (26.7 put away percentage in 2019 to 15.5 percent this year). That being said, the improvement of his fastball and sinker could make him a more well-rounded pitcher, especially as he adjusts this off-season to this new windup, and new “slider-heavy” pitch repertoire.

Not a ton of Royals news but let’s look around the league.

Maybe the sky is sad because they released Kung Fu Panda.

Sandoval’s release marks the second time this season the Giants have parted ways with a struggling fan favorite. The Giants released outfielder Hunter Pence in August after designating him for assignment.

Forbes with the headline: “MLB on the Cusp of Holding a Monopoly on All Things Baseball”

It’s analogous to what Manfred did on the first day he took over. Besides signing some baseballs for the Hall of Fame, and publicly touting an initiative to grow youth baseball and softball, behind the scenes Manfred started the process of pulling the league’s divergent business arms under one umbrella. No longer would those seeking to be league sponsors have to go to each division (television, digital and naming partners); instead, Manfred sought to streamline the process into a one-stop shop. He then pushed to pull MLB Advanced Media, the league’s digital media company, out of its Chelsea offices and into the league headquarters. Since the day this process occurred, league executives have cited the internal initiative as “One Baseball.” The name clearly showed that making MLB one big family was the direction it needed to take.

Obviously, today is 9/11 and has huge historical significance for those living in the United States. But this year, I think 3/11 was a hugely significant date. We’re exactly 6 months into when the pandemic “became real” for a lot of people. On that day, WHO declares COVID-19 a pandemic. But the real news was that night. Within about an hour, the NBA cancelled all games due to Rudy Gobert testing positive (two days after doing this), news leaked out that Tom Hanks and his wife had tested positive, and President Donald Trump held an Oval Office address to speak to the crisis and implement a travel ban.

On a personal level, it was a grim milestone in Houston as they closed the Rodeo halfway through its run. However, over 800K people had already attended and, unsurprisingly, Houston would become a hot spot for much of the summer. For me, it was the last day I would go inside the grocery store for weekly groceries.

While it seems like 2020 has lasted roughly 47 years, we are now exactly 6 months from that day. So if anyone wants to do a quick check-in where they are now versus then – the comments are open.

This is definitely not catnip (computernip?) to Hokius. None whatsoever.

The original Kingdom Hearts came out on the Playstation 2 in 2002. The sequel came out for the same system in 2005. In between, there was a little game for the Game Boy Advance subtitled Chain of Memories. It filled in some of the plot between I and II and had a gimmicky card game mechanic driving it. So we’re talking 6th generation games. FYI: the 9th generation will begin this Christmas with the launch of the PS5 and whatever name the new XBox ultimately decides on.

It could be argued that the last “mainline” game was in 2005. After that, we got Coded/Re:Coded and 358/2 Days, a pair of smaller games for the Nintendo DS (and cell phone) that fleshed in some backstory but, again, had mostly gimmicky gameplay.

But then we get to the 7th generation handheld games. They don’t feel as large as KH or KHII, but they’re the next best thing. They feel like full games, even if on the smaller screen. The PSP’s Birth by Sleep (2010) is a prequel set 10 years before the first Kingdom Hearts and sets up characters and plots that will resonate in III. Meanwhile, the 3DS’s Dream Drop Distance (2012) is a direct sequel to KHII and brings the original KH characters into position.

As an aside: yeah, Dream Drop Distance is a bit of a mouthful. During the early days of their consoles, Nintendo has sometimes encouraged silly names to match the system. “Dream Drop Distance” (3Ds: Get it?) joins the forced name brigade along with the previous DS generation’s Advance Wars: Dual Strike and Castlevania: Dawn of Sorrow.

In the ensuing years, there haven’t been any significant entries into the Kingdom Hearts franchise. So I can finally get onto 2019’s Kingdom Hearts III. Though there might be a diversion or two between now and then.

As for Dream Drop Distance, the game follows main protagonist Sora and his friend Riku, who, once again, seems doomed to follow a parallel but darker path. They set off to do their Mark of Mastery exam, only there’s some dream mechanics, some time travel, and Xehanort has, of course, hijacked the entire proceedings, trying to bring about Kingdom Hearts and the X-blade. There are new battle mechanics, a new mini game (Flick Rush), and a number of new worlds, including a highly anticipated inclusion of The World Ends With You characters. Not that anyone was rushing out to play an 8 year old game but, unless you’re already deep in the lore of the series, this is not the place to start. It feels more like a teaser to KHIII (which was 7 years away at the time) than a standalone game.

As for the song of the day, there are lots of common Kingdom Hearts themes like “Dearly Beloved”, “Sora”, and “Sanctuary”. Takeharu Ishimoto remixed some TWEWY songs like “Twister” and “Calling”. There are some new themes around the sleep motif and the Dream Eaters. But let’s pick something from one of the new worlds. On the Tron: Legacy world, the main overworld theme is called “Access the Grid”: