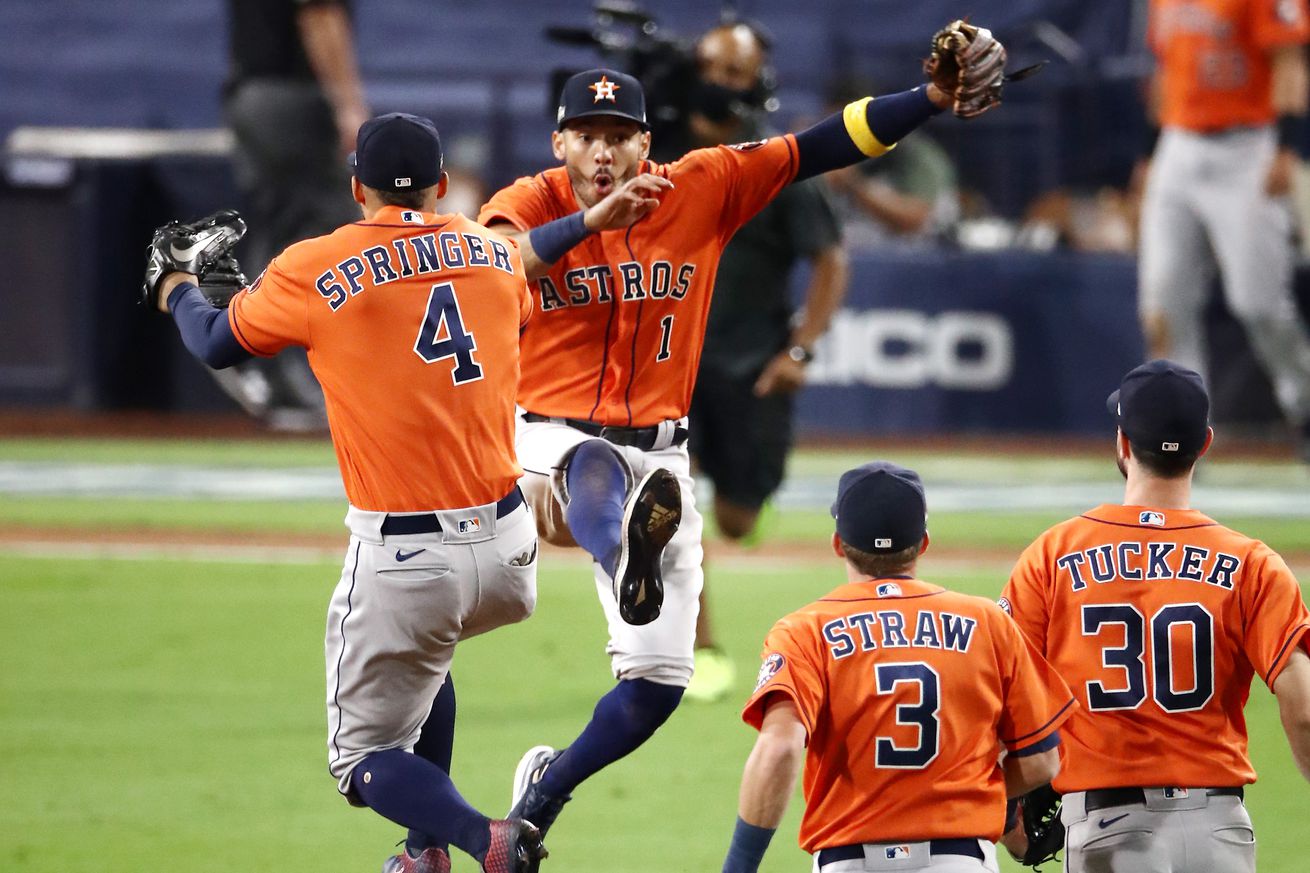 The Astros are gonna to do this aren’t they.

OK so it might happen. Major League Baseball expanded the MLB playoffs and every baseball purist hated it mainly because of the hypothetical that a sub .500 team gets hot at the right time and does the damn thing all the way to a title. I was (and still am) completely un-phased by the expanded playoffs even though I’ve gone on the defense of the expansion a couple times. I’m honestly very much neutral on the whole thing. And now the arch nemesis of every baseball fan outside of the greater Houston area is on the cusp of making that outrage inducing hypothetical reality. I’d like to take this time to publicly state my position on this.

OF COURSE it’s the Astros that could be the ones to do this. They did everything they possibly could to spit in the face of the baseball world in its entirety for the past three years; why would we expect anything else? Buzzers? Sure! Banging trash cans? Why not? Showing everyone that they can be bad all season and hit their stride despite losing Justin Verlander, Yordan Alvarez, and Jose Altuve (who’s still playing) for the year? Of course they would. It’s pure chaos that sends the establishment and all their fundamental followers into a frenzy and I love it. Friday night they moved to within one game of the World Series, and at this point, there’s a small part of me that wants to see it just to light baseball Twitter on fire for a week. Can you imagine if they beat the Dodgers in the World Series again? The amount of vitriol that team would receive will be next level. It’d be the perfect relighting of the outrage flame for the fans to think past the last six months of not being able to boo them and make the Astros the full fledge heels that Carlos Correa seems to crave. Big baseball journalists will be foaming at the mouth for that storyline. You won’t be able to check your bank account without seeing an article about the cheating scandal. I’m not rooting for it at this point (maybe I am), but I am already trying to make my peace with it.

On to the rumblings…

Alec Lewis at The Athletic did a checkup on what the Royals front office is thinking of the development of top hitting prospects in the system. There were lots of encouraging nuggets in there but he led off with this:

Before we assess Pratto’s strides at the plate, it’s probably important we discuss his ability to field his position at first base. The Royals value defense at that position, thinking it enhances the entire infield. Eric Hosmer was an internal example. Paul Goldschmidt has been another in St. Louis.

This is important to note because Pratto’s defense is Gold Glove award-caliber already. Any Royals official would stress his almost innate feel, his ability to get to balls, his command of the infield. Those abilities give him a leg up in terms of his prospect status, though a first baseman has to hit.

While we’re at The Athletic, Kaitlyn McGrath took at look at the “What-if” scenario of Toronto beating the Royals in the 2015 ALCS.

If any of those above scenarios had gone the Blue Jays’ way and they squeaked out Game 6, they would have fought off elimination for a fifth time. Could they have done it once more? In Game 7, the Blue Jays likely would have sent Stroman to the mound against Johnny Cueto.

The matchup would have suited Blue Jays hitters. In one regular-season game, the lineup hit .292/.346/.375 against Cueto. In Game 3, the Blue Jays hung up eight runs on six hits on Cueto, who hadn’t looked completely comfortable in the postseason to that point. Meanwhile, the Royals scored just four runs on 11 hits off Stroman earlier in the series.

Adam Carriker of the Omaha World-Herald sat down with the next Royals Hall of Famer, Alex Gordon, to discuss his baseball life from college to the shortened 2020 season.

Tobey Maguire and Andrew Garfield have apparently signed on to be in the next Spider-man alongside Tom Holland according to FandomWire. Hello, Spiderverse?

Fantasy Start of the Week

Rodrigo Blankenship, K, IND
This portion has gone almost too well for me. 3 weeks in and I’ve missed on all 3. But you’re in luck because I’ve got a can’t miss player this week: Rodrigo Blankenship. One could say that my failure at giving good fantasy advice is due to a lack of foresight. Well Blankenship is most famous for wearing RecSpecs so my sight, much like Rodrigo’s, has been corrected and we’re seeing perfectly clear. Blankenship is probably on the waivers in your league (if you’re still using kickers) because no one drafted him and no one is churning their kicker spot until a bye week. He’s going to be kicking bombs all over Cincy this week so start him with confidence. I’m 57% sure it’ll work this week.

Hell of a View by Eric Church

Church’s newest single sounds an awful lot like a classic Eric Church single. I’m not a huge country guy but almost everything Church has done has been great. He puts on a great live show as well if you ever get the chance to see that. It’s going to be beautiful in KC today and I hope the weather is just as great wherever you are. Have the best Saturday you can dream of today.