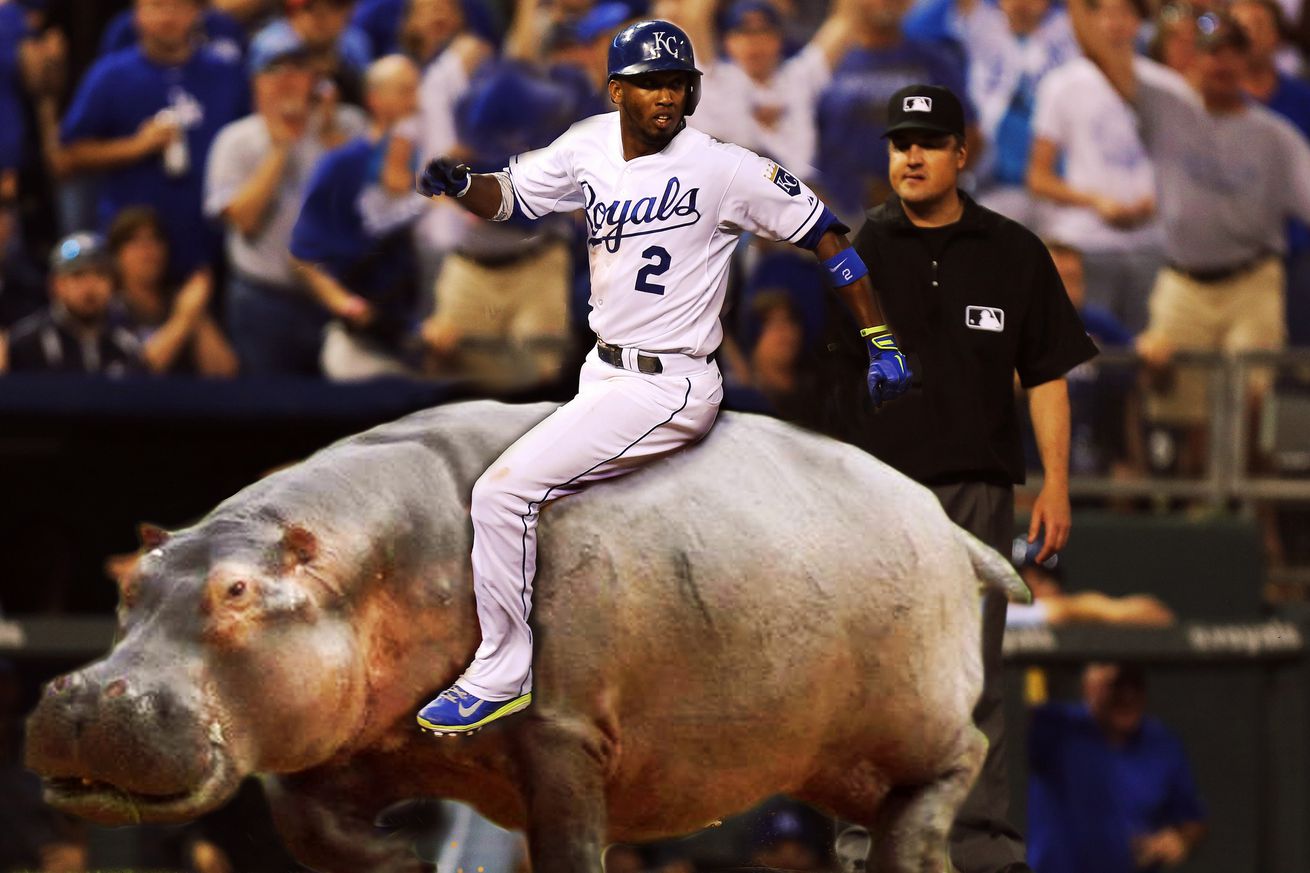 Why is Esky riding a hippo? I don’t know!

(ED NOTE: I have used this image before and best I can tell, it was a Tyler Drenon.)

No new Royals news today from the major outlets. Nothing from MLB.com. Nada from The Star. Nope, not The Athletic. Not even the AP.

The Royals did have this fun video about the a “Day in the Life at Fall Camp” from Mitch! Brewer Hicklen.

Instead, today will be a day to highlight some Royals blogs. Kevin O’Brien of Royals Reporter gets his first ever leadoff spot for Friday Rumblings (I think). He looks at what might happen with Danny Duffy in 2021 with 3 main options: Starter, Reliever, and Trade.

Prediction: The Royals should have a good shot at bringing Duffy back to the rotation for a fourth consecutive season. The Royals most likely will move slow with their new starting pitcher prospects, and start them in Double or Triple-A (the latter in Kowar’s case, probably the former in Lynch’s case; Lacy could be a High-A Wilmington candidate). Furthermore, the Royals would benefit from letting Duffy work from the end of the rotation rather than at the top of the rotation in the No. 1 or No. 2 spot, which he has had to do this year. At this point, unless the Royals bring in a free agent (though that still seems to be in play), it is a 40-50 percent chance that Duffy returns as a starting pitcher in Kansas City. If they do bring in a free agent starting pitcher, I think that that percentage gets cut in half, and his reliever percentage ticks up a bit as well.

If you’ve been reading Friday Rumblings all season (and I know at least 0 of you do), you’ll know that U.L.’s Toothpick has been going day-by-day through the 1980 season. We’re into the World Series now:

For the second game in a row, Royals pitchers could not hold on to a lead. The Philadelphia Phillies scored four runs in the eighth inning for a comeback 6-4 win over Kansas City in Game Two of the World Series, on a Wednesday night at Veterans Stadium.

Connor Miller of Royals Blue caught up with Jeffrey Flanagan.

When I asked Flanagan what the most difficult part of his job was, he said, “The most difficult part is the grind of a baseball season, the travel and being away from your loved ones from the beginning of spring training until October. Even when you’re home, you will be at the ballpark from 3:00 p.m. until 1:00 a.m. You have to love your job to do this. It’s not for everyone.”

I’m even going to break my Fansided moratorium for this week.*

At KC Kingdom, Leigh Oleszczak has a trio of recent stories:

Meanwhile, at Kings of Kauffman:

*For those who don’t remember, I like many of the writers at the KC sites (I even remember how to spell Oleszczak) and often linked to their work in the past. However, sometime in this past year, the site broke on my default setup of Firefox with ad blockers and when I put it on any other browser, the fans on my gaming laptop have to spin up because of all the ads and “pivot to video”… which also had a ton of ads.

The AP has a cool “This Date in Baseball” section. One of today’s notes:

1985 — The Kansas City Royals captured the American League pennant with a 6-2 victory over the Toronto Blue Jays in Game 7, capping a comeback from a 3-1 deficit.

The NLCS game ended too late to update Rumblings.

In the ALCS, the Astros survive another day on a Carlos Correa walk-off home run. Game 6 is this afternoon.

Want some Zack stories? Of course you do!

That Zack Greinke has come to enjoy playing for Dusty Baker is not surprising. Greinke loves baseball and its history. Dusty Baker loves people. One of my favorite parts of this story was listening to former players talk about his friends. https://t.co/4fPaNmGATH pic.twitter.com/kgGC3DK6Ap

Unsurprisingly, Zack is happier with no fans in the stands:

“For me, it’s nice not having fans in the stands,” Greinke added Tuesday. “Because there’s no one trying to talk to you and ask for autographs and wanting to take pictures and all that stuff. I don’t like any of that stuff.”

Meanwhile, a guy who lives outside Petco park is heckling the Astros from his balcony with a megaphone.

It was in the fourth inning that a lone voice broke through the music and artificial crowd noise at Petco Park. “Attention: Members of the Houston Astros organization that participated in the sign-stealing scandal of 2017 and 2018,” a man’s voice said through what sounded like a megaphone. “You all are a bunch of cheaters. The global baseball community has not forgotten your transgressions against the game.”

Something about the Rays instead? Bill Thompson at Beyond the Box Score talks about the conflict of how the Rays are built versus what is best for baseball in the long term.

Watching the Rays play I fail to see how the aesthetic they represent is one that is sustainable long term. Sure, it’s sustainable when it comes to them winning, but is it sustainable when it comes to keeping fans engaged, both at a local and global level? The numbers may say that your starter should be pulled after 4 innings, but that doesn’t mean that fans will see a game where 11 pitchers are used and think, “Man, this is the good stuff, this is why I watch baseball.” The way the Rays use their pitchers slows down the game, and it stops fans from forming any sort of attachment with the never-ending cavalcade of pitchers the Rays use on a daily basis. This isn’t a problem for hardcore fans, but it is a major issue for casual fans who want and need recognizable faces to draw them back.

The KBO and MLB came to a new agreement about player postings.

MLB will hold regional scouting combines this month in five areas across the country for 2021 high school prospects.

It will partner with @DrivelineBB to collect data, too.

We’re a little light on content so how about some “one line” movie reviews. I’ve watched a few more movies than normal over the past few months so I have some to throw out during the offseason. Since 2020 has been the year it’s been, we watched the Jumanji movie series. Honestly, I’m not sure I had seen any of them before this year.

Jumanji (1995) – Robin Williams is quintessential Robin Williams and everyone else in the movie works fine. But the narrative gets stretched too thin and is just frustrating for long stretches. The set pieces that are used as filler look dated and the characterization is mixed, at best. It’s… fine, which is probably why it takes 20 years to churn out the next 2 movies.

Zathura (2005) – It’s hard to not compare Zathura to Jumanji. But both suffer from the same frustrating failing of not enough plot. Since Zathura looks better and more “realistic”, the set pieces aren’t as tedious. Points to the better director (Favreau) there. However, the characters are much worse: we trade in Robin Williams for Dax Shepherd (which could have been a worse downgrade) but the kids and supporting cast in Jumanji are light years better. And the skewed movie morality is just cringe-worthy. As mentioned, it’s not in the “movies should teach us morals” but “how in the world are these characters rewarded for these mistakes”. In the end, this movie was even more frustrating and we just wanted the characters to lose and the movie to end.

Jumanji: Welcome to the Jungle (2017) – Easily the best movie in the series. The four main cast members really make it enjoyable. The Rock and Karen Gillian mostly captures the awkwardness of our two main characters. Kevin Hart pulls off some good comic relief, though you wish his character had been given more to do. Jack Black does well with a combination of “I’m a girl in a male body” physical humor and attempting to give depth to a shallow character (though not too much as that’s one of her core traits). It’s quite predictable and simple but it’s a fun, easy watch and feels like a 90s movie at its core.

Jumanji: The Next Level (2019) – I’m not sure where I’d go, making a sequel. Either I’d have to ditch the excellent quartet of Rock, Black, Hart, and Gillan or contrive a reason for them to have to go back to Jumanji so they took the second route. The cast gets more bloated, the character parts aren’t as interesting as in the first reboot, and the plot is getting warmed over by now. It’s probably the second best movie in the series despite the serious sequel problems. It’s not as good as the movie that came before it, but marginally better than the first two iterations (though I’d listen to the argument that the original was better).

We haven’t revisited Link to the Past this year. Last time we did the overworld theme for the light world. How about the Dark World theme this time?