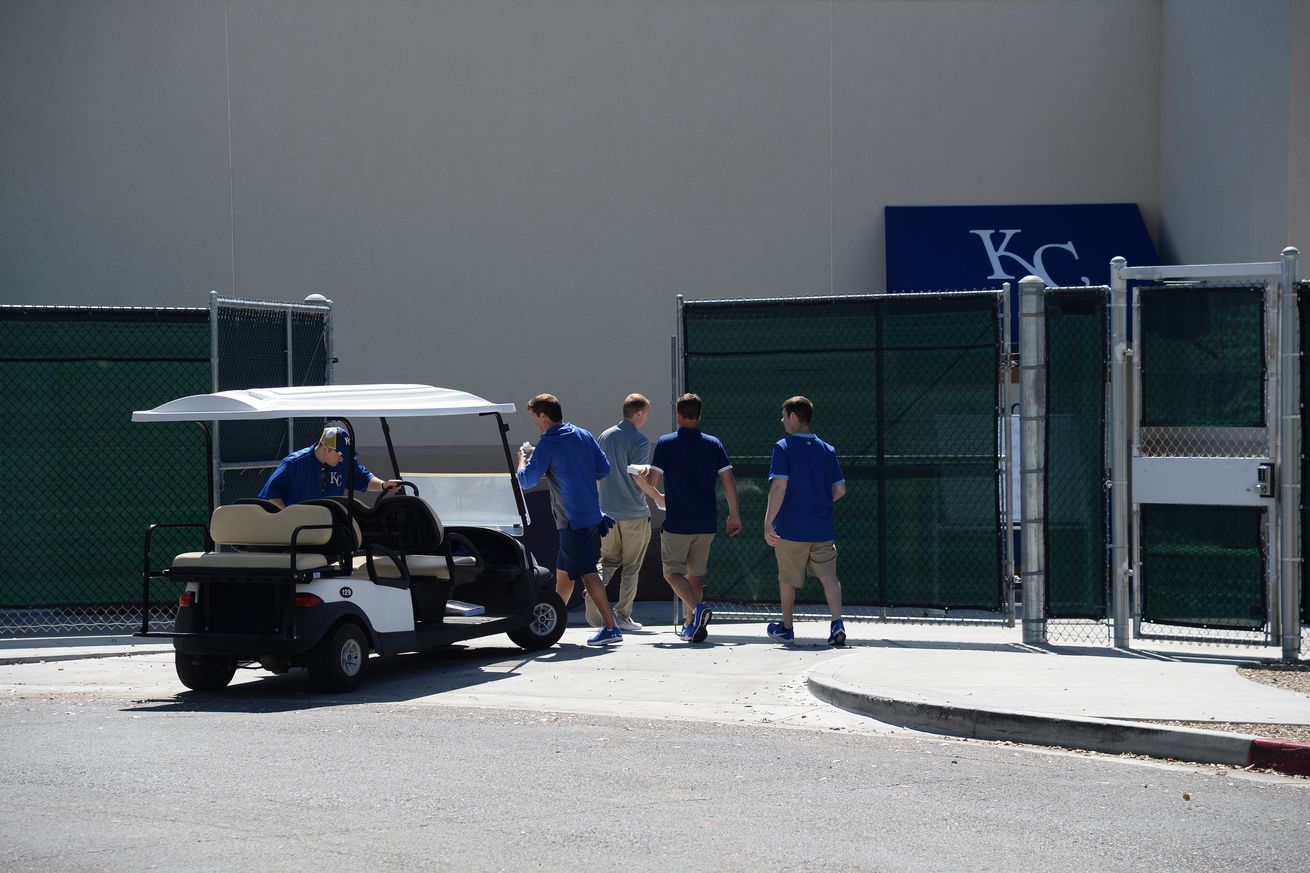 Editors note: Max is out and Shaun is taking over Rumblings today.

Well, you probably know by now that baseball is going to be back for 2020, but we are still feeling out how the season is going to work, so let’s hop into the subject with some links

Along with the schedule, there’s been a steady flow of information on new in-game rules, the trade deadline, and perhaps the issue causing a delay — whether players living with individuals at high risk of complication from COVID-19 can opt out of the season and receive service time and salary

Also at the sabermetric mothership, Dan Szymborksi (the mother of ZiPS) gives us his creation’s projected standings for the soon-to-be shortened season and some strength of schedules. The Royals have a middle of the road opponent strength, coming in at an almost even .499. The real surprise finding here is that the Royals have an almost 15% chance to make the playoffs given that vanilla schedule and the variance that a short season plays. That 14% is the 3rd smallest in the American League but it’s far better than 0%.

Baseball America updated their 2020 top 100 prospects list to include recent draftees (though some of them on this list have yet to sign – #1 overall pick Spencer Torkelson the most notable). The Royals chime in with four players and three in the top 50.

Skinny: The top arm in the class, Lacy joins the Royals’ bushel of high-end college pitching talent. The list already includes Top 100 prospects Daniel Lynch and Jackson Kowar, as well other excellent prospects like Brady Singer, Austin Cox and Jonathan Bowlan. Lacy was excellent for three seasons at Texas A&M and turned in a fine summer with USA Baseball’s 2019 Collegiate National Team as well. Interestingly, Lacy’s pitch grades match exactly with those of Padres top prospect MacKenzie Gore. The only difference on their cards is a half-grade control advantage for Gore.

Meanwhile as teams prepare who will be on their expanded rosters for the upcoming “season”, Dayton Moore says there won’t be anyone surprising on their initial list of 60 eligible players.

“We may look forward to an opportunity to add some of our top prospects to this group of 60,” Moore said. “That’s still something that we’re looking at, and we have been looking at. We want to do that in a coordinated way and what the future might look like the rest of the summer.”

Alec Lewis of The Athletic wrote a Royals fan guide for an unusual 2020 season in which he runs down a lot of small details in relation to how the Royals are set up for the year.

Similarly, Jeff Flanagan at MLB gives us some answers to some frequently asked questions for the Royals 2020 season

How can you watch the games?

The Royals and Fox Sports Kansas City still have a handshake agreement for a multi-year deal that is expected to be finalized before the regular season begins. A source told MLB.com that a finalized deal is still expected prior to the regular season starting in late July. You can also stream out-of-market Royals games LIVE on MLB.TV on your favorite supported devices.

And for your daily “pivot to video content”, KCTV5 says the Royals are ready for the 2020 season

And finally, the Royals new owner John Sherman released a statement on the return

Since I’m on Rumblings duty, you get your unusual amount of snoozefull finance links and thoughts:

I don’t believe in technical analysis, which maybe is weird for someone who is into sabermetrics, but I think sabermetrics is more linked to fundamental investing than technical analysis perhaps. The problem with technical analysis is that it’s a self fulfilling prophecy essentially: people follow charts and patterns and when a pattern is realized they take action. If Apple crosses over it’s 200-day moving average or forms a particular pattern, technical traders sell Apple. They may not think Apple’s business model is flawed or their revenue is in jeopardy, it’s just historical when a stock has done X then it often does Y. Now, just because it did X doesn’t mean it will do Y, it has just done Y in the past after X.

But that isn’t to say you can’t use some technical analysis, and watching broad-based metrics based on fundamental data seems useful to me. A lot of traders look at what is called support and resistance, both pre-defined levels than define a channel for a stock. If a stock breaks through either (support on the downside, resistance on the upside) it is thought that it will continue that pattern. While I don’t care for technical analysis, I do believe somewhat in support/resistance when it comes to the market as a whole. I think markets typically have to take a breather after a sharp up move or have a “relief rally” after a sharp down move (which is often why some of the best individual days in the market happen during an overall bear market).

There has been no doubt about the sharp upwards move in the markets since mid-March that followed an even sharper drop. As you can imagine, a big move in either direction will lead to firms setting themselves up for a reversal. Yesterday, hedge funds and other large institutions have piled into a short (ie: betting on the market to drop) position on the stock market, the highest ratio in four years:

This is natural, right? Stocks are mostly/kinda/somewhat gambling even for the most knowledgeable investors and professional gamblers will often hedge when they are up big. After all, you don’t want to get the play right only to lose it all because you didn’t know when to sell and knowing when to sell is impossible when it comes to investing. And while hedge funds and big institutions aren’t selling everything and going to cash (which actually historically has been a sign to buy) they are hedging via net short positions to help take away some of the potential pain of a sell-off after a big run up.

Gold is also nearing an all-time high, which typically happens as fear starts to spread in the market. Like technical analysis, I think buying gold is also 1) a self fulfilling prophecy and 2) dumb. For starters, gold has no intrinsic value. There is no series of cash flows from it and doesn’t pay a dividend. It’s only worth whatever the market says it is worth and that market changes quickly and swiftly. Also when you buy gold, you typically don’t get to actually hold it. It’s stored in a vault somewhere and a company will often charge you to store it.

Assets prices rely on correlations to other assets often: when stocks go down, bonds go up (not always but often). But stock and bonds have intrinsic value. A stock is a part of a business and that business (hopefully) has cash flows. Bonds have coupons that pay out semi-annually and when they mature you get a set amount back. Gold…just sits there. It only goes up in price because people think it should go up in price. It doesn’t increase it’s forecast for profit or improve its credit quality from BBB to BB. It just waits for you to do something with it like a pet rock or a frisbee. And the day that gold no longer just simply goes up because stocks go down, the day we can be free from this pet rock of an asset.

Hertz is going bankrupt. Or at least, it is has said it is going bankrupt and it’s one of the biggest bankruptcies of 2020. But here is the thing: people don’t seem to care. Well, Robinhood (the millennial trading platform where betting habits make Las Vegas look like Leawood Kansas) traders don’t care. As Hertz has dropped in price, Robinhood traders have been buying shares (via RobinTrack)

Hertz said to themselves “so people are still buying our stock even though we clearly aren’t going to be in business much longer by our own admission?” and Robinhood traders said “…yup!”

So Hertz had an actually smart idea and said “well if people are buying our stock, we should issue more for a capital raise since we’ve run out of money!” So they filed for a $500M offering and even in the prospectus said essentially “if you buy this you are probably going to lose it all and get nothing”:

There is a significant risk that the holders of our common stock, including purchasers in this offering, will receive no recovery under the Chapter 11 Cases and that our common stock will be worthless.”

Is there a moral issue with companies offering up stock that they know better than anyone is worthless? Or is the filing of the prospectus their maximum due diligence and assume that potential investors should know better? In this case, anyone buying Hertz has to know that the company is probably going to be out of business in the very near future. It’s not as if Hertz is hiding losses through shady accounting measures. They literally filed for bankruptcy! And then in their prospectus for that offering (which I’ll admit almost no one reads them) they said “are you sure you want to buy this, there is significant risk that our common stock will be worthless” And yet, Robinhood traders said “…yup!” (the SEC eventually put a stop to the issuance so Hertz had to raise cash a different way – offering debt)

I’ll leave you with one final note that I was reminded of recently and it has always stuck with me, the concept that “everything is securities fraud” – a concept I’m borrowing from Matt Levine of Bloomberg.

As food for thought:

If it is illegal to trade on material non-public information (it generally is) and Joe CEO knows that 1) he’s been running an underground fight club at work 2) that information will come out eventually 3) when it does he’ll be fired and 4) his firing will have a material impact on the stock price, is it illegal for the CEO to sell any of his stock? Not all at once, but executives typically sell their company stock in increments over time, typically as their options vest. So if Joe CEO has been committing offenses over the years, should he also be forced to hold his vesting stock lest he be also guilty of insider trading. I don’t know, maybe.