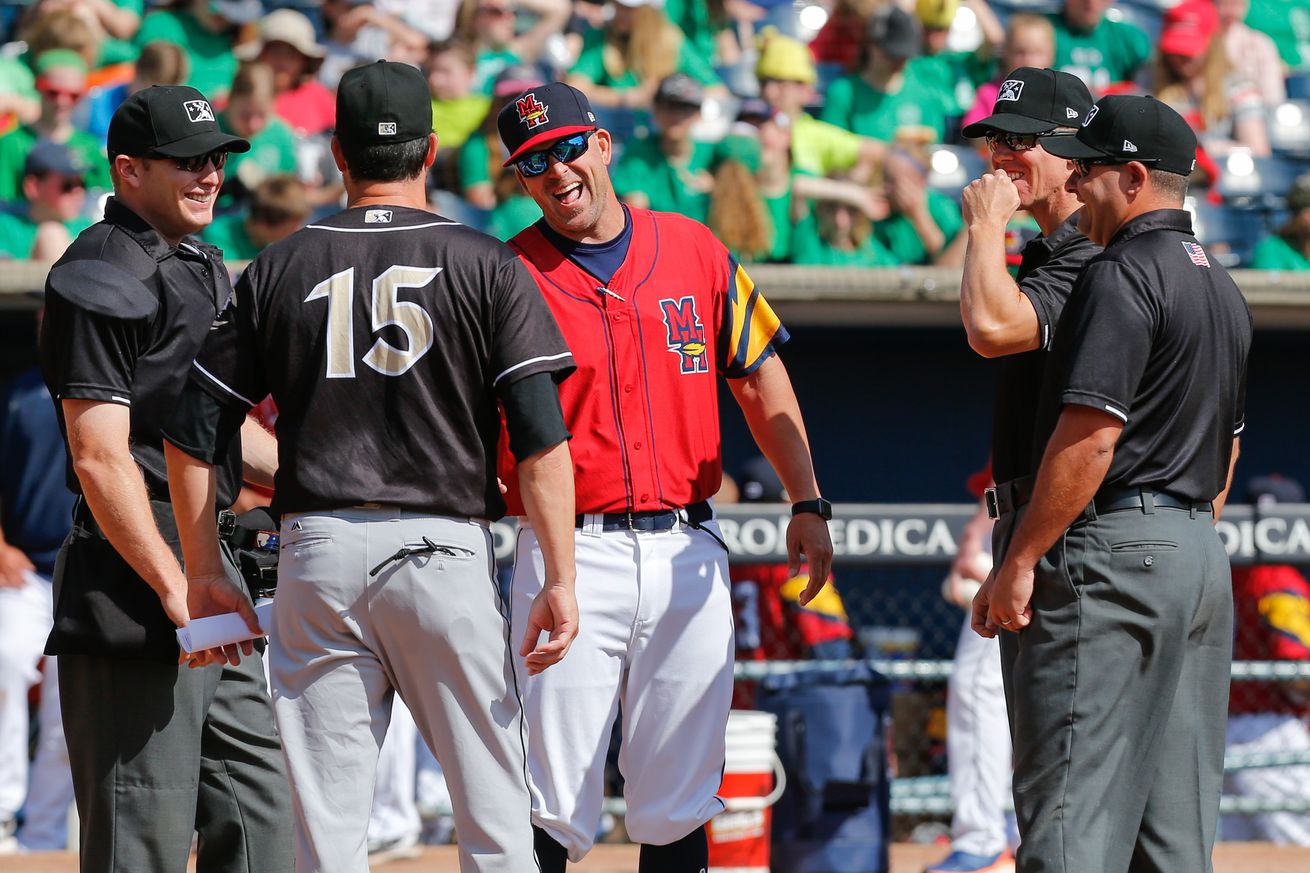 The Royals have an official blog? I did not know that. I also did not know that they hadn’t announced their 2019 Organization Awards. Apparently the ceremony was supposed to happen the week COVID shut down Spring Training.

The Kansas City Royals honored 10 individuals with organization awards for the 2019 season via Zoom ring ceremony yesterday afternoon that included all players and the Baseball Operations staff. The Royals’ four 2019 championship affiliates were also honored.

“I actually feel more for these players and coaches and scouts and all of you that this is your livelihood and this is what you’ve done for many, many years,” Sherman said on the call which featured executives, scouts, coaches, players and support staff from the organization. “I actually have great empathy for the situation we’re in right now. Rest assured that I am working 24/7 to try to get us back on the field.”

Alex Gordon, Nicky Lopez, and Bubba Starling were working out at Kauffman Stadium on Wednesday.

Jeffrey Flanagan writes about the undrafted free agents the Royals have signed so far.

The Royals’ position on not cutting salaries or releasing Minor Leaguers bolstered their reputation for undrafted players looking for a baseball home. And that, combined with their old-school philosophy of having their scouts work tirelessly to form solid relationships with prospects — a process that sometimes involves years — has led industry observers to believe Kansas City would perform well in signing non-drafted free agents this year.

Well, so far, those theories have been proven correct. The Royals have reached agreement with seven NDFAs as of Thursday, and according to MLB Pipeline’s Jim Callis, they have landed the most talented of the available NDFAs so far. “I’m not even sure who the No. 2 team is,” Callis said. “Of the 15 best players anyone [has] signed, they have five of them.”

More on the draft from The Athletic (sub required):

Cheating or not? How teams pushed open the loopholes as far as they could to sign the $20kers after the draft: https://t.co/KX90fSWyYX

At age 14, Nick Loftin covered his wall with inspirational sayings.

Here’s the story of how Loftin became that kid, and why he fits so well with the Royals:https://t.co/2tTHEo7vI7 pic.twitter.com/6gNjkIRXAf

How about from Baseball America (also sub required, but different sub)?

Here’s what you need to know about every pick:https://t.co/43CEKDNejN

Not Royals-related, but, in KC baseball news, Andrew Golden of the Star wrote about the T-Bones. Their league will have a 60 game season starting July 3rd. Only 6 of the 12 teams will be playing (not the T-Bones) and they will be playing in 3 “hub cities”. Players from the 6 teams not participating were drafted in a dispersal draft and will be returned after the season.

Without a season, the T-Bones will have to wait to defend their 2019 South Division title. Brandmeyer said the team is still in the process of signing the contract with local government to renew a lease for next season. Because of COVID-19, the team’s inability to host games this season changed the terms of the contract, forcing the two sides to draft a new one, he said.

Here’s a couple of selections from Royals blogs:

The big holiday here in the US is Juneteenth and that’s, needless to say, getting some heightened attention this year. For those unfamiliar, it “is an unofficial American holiday and an official Texas state holiday, celebrated annually on the 19th of June in the United States to commemorate Union army general Gordon Granger’s reading of federal orders in the city of Galveston, Texas, on 19 June 1865, proclaiming all slaves in Texas were now free. Although the Emancipation Proclamation had formally freed them almost two and a half years earlier, and the American Civil War had largely ended with the defeat of the Confederate States in April, Texas was the most remote of the slave states, with a low presence of Union troops, so enforcement of the proclamation had been slow and inconsistent”.

It’s rare we have anything I recognize before the Middle Ages but it’s the day the Nicene Creed is adopted in 325.

Anyone else have those stories in history class about the mystery of Roanoke? Per wiki, it was abandoned on this day in 1586.

The Civil Rights Act of 1964 passes the US Senate after (not a typo) an 83-day filibuster. Senator Richard Russell (D-GA) demonstrating what being on the wrong side of history sounds like: “We will resist to the bitter end any measure or any movement which would have a tendency to bring about social equality and intermingling and amalgamation of the races in our (Southern) states.”

But here’s the big news for this site. In 1846, the first official baseball game takes place in, of all places, Hoboken, New Jersey. At least, in theory. Let’s just let wikipedia roll with this:

The first clearly documented match between two baseball clubs under these rules took place on June 19, 1846, at Elysian Fields in Hoboken, New Jersey. In this match, the Knickerbockers lost to the “New York nine” (probably the parent Gotham Club) by a score of 23 to 1. Some authors have also questioned the supposed “first game” under the new rules. The Knickerbockers’ scorebook shows intra-club games during 1845; the New York Base Ball Club played at least three games against a Brooklyn club in 1845 also, but the rules used are unknown. Those who have studied the score-book have concluded that the differences in the games of 1845 and 1846, compared with the specifications of the Knickerbocker rules, are minimal.

There are 49 baseball birthdays on June 19th, which seems high. Lou Gehrig is the only Hall of Famer, but there are some other notables. Eddie Cicotte was part of the Black Sox Scandal and was one of the more notable characters in the movie Eight Men Out. Jacob deGrom is 3rd and, with only 6 seasons under his belt, we’ll see where his career goes. At 49th, and last, Johnnie LeMaster played in the majors for 12 years but accumulated a -5.4 bWAR and a career OPS of .566.

A number of former Royals have a June 19th birthday. Happy 43rd, Bruce Chen! He played for 11 teams but his 6 years with the Royals were his longest of any… wait? 6 YEARS?!? Seriously?!? Bruce Chen? Really? Also celebrating today is Doug Mientkiewicz, half of the jersey-stretching right side of the 2006 Royals infield. Two internet points if you can name and correctly spell the other half*. Another Juneteenth birthday is Yasuhiko Yabuta, who I think scared the Royals out of the Japanese market for a number of years. Butch Davis and Fernando Gonzalez, both before my Royals fandom, also have cake days.

Hm… this first couple of sections went a bit long so we’re just going to slide right into today’s song. How about some nice, calm Animal Crossing music?