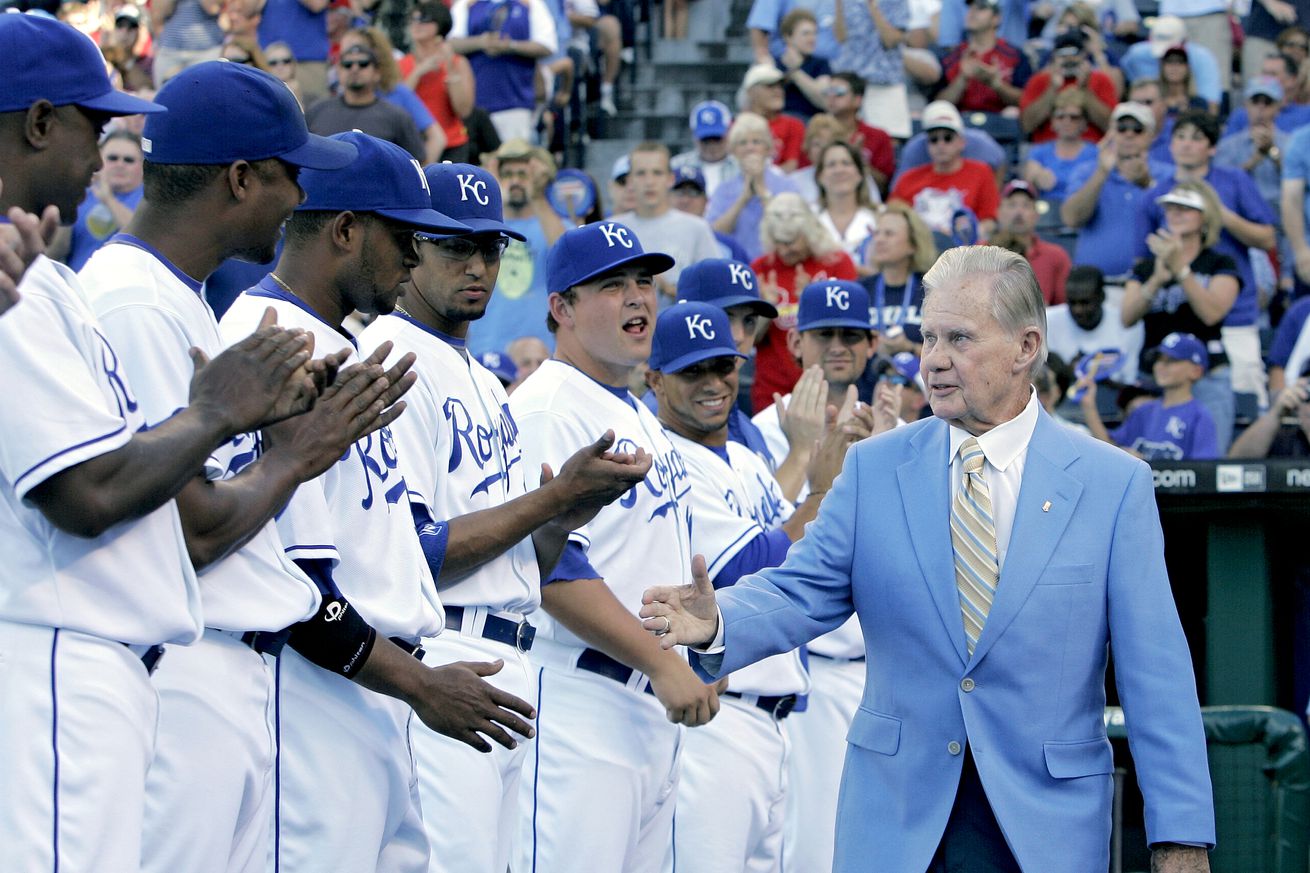 Hey! I was at that game! | Photo by John Sleezer/Kansas City Star/Tribune News Service via Getty Images

As we edge away from football season and towards Spring Training, the amount of content has finally picked up.

Baseball coverage is back at the Star. Lynn Worthy writes about how Maikel Franco is in the best shape of his life is getting a fresh start.

The Royals didn’t wait until spring training to dive in and start helping Franco. He spent most of January working out in Miami with bench coach Pedro Grifol and special assignment hitting coach Mike Tosar, as well as catching prospect MJ Melendez, plus Soler and Perez. Grifol lauded the scouting and front office staff for having identified a player in Franco who fits in with his teammates and who is motivated and willing to put in the necessary work.

“The guy has a will to be great,” Grifol said of Franco. “He’s going to will himself to be a very, very good major-league player, even more than what he already is. He has put up numbers, but he’s not comfortable with that. He’s hungry for more, and I believe his character and his makeup will himself to be the very best that his talent has to offer.”

The Kansas City Royals have made some significant changes in player development since the end of last season. Most-impactful might be the hiring of Drew Saylor as their new hitting coordinator. The 36-year-old Ohio native brings a progressive, technology-meets-behavior-theory mindset to the organization via the Pirates and Dodgers systems. He spent last season as Pittsburgh’s assistant minor-league hitting coordinator, a stint that followed three years of hands-on experience tutoring Los Angeles farmhands. Saylor was named Baseball America’s 2018 Minor League Manager of the Year.

Over at Twinkie Town, they’re doing a series on their AL Central opponents. Jonathan Gamble drew the short straw and had to preview the Royals.

Last year, the best thing you could say about the Kansas City Royals was this: “Hey, at least they’re not the Tigers!” (Sorry Gardy)

In all seriousness, the Royals had been slowly declining ever since they reached the World Series. 2019 wasn’t exactly rock bottom (they improved by one win over 2018), but it was pretty darn close.

Alex Duval continues counting down the Preseason Prospect Rankings with 45-41. You won’t believe who is #44!! Actually, you might. Remember Foster Griffin?

Griffin’s 5.23 ERA may not look like much on the surface, but it was actually average compared to the rest of the PCL last year. Among 20 qualified pitchers in the PCL, Griffin’s ERA ranked 10th and his FIP was 11th. Lower the innings requirement to 70 IP and his ERA ranked 33rd out of 74 and his FIP 39th. Griffin will never be a high strikeout guy, and he walked way too many hitters win 2019 to survive in the big leagues, but it’s still too early to write him off. Griffin doesn’t throw very hard, but he has a very good curveball and, while his changeup has never been super effective, I think the pitch has good shape and at least potential to be an average third offering in the big leagues. I don’t think Griffin’s future in the big leagues is in the rotation, but he could potentially serve as a Brian Flynn-like swing-man between spot starts and the bullpen…as soon as he adjusts to the new ball.

Only one story from the Kansas City Fansided sites.

At KC Kingdom, Cody Rickman slideshows “Four position players due for bounce back season in 2020”

Connor Moylan was the first to write this annual article. Rumor has it that each year the staff at Royals Review holds a Royal Rumble in a vat of Billy Butler’s BBQ sauce to determine who gets to write this article.

Joe Posnanski continues his journey through his Baseball 100 with a larger than life pitcher:

No. 50 on the Baseball 100 struck out more batters, walked more, was more unhittable, threw more wild pitches and ignored more baserunners than anyone ever. He was unbeatable and also he lost more games than any pitcher in modern baseball. He’s Nolan Ryan. https://t.co/5802rgCLjE

Dodger fans and Yankee fans are teaming up to boo the Astros for their season opener in Anaheim.

Pantone 294, a traveling group of Dodgers fans, told Bill Shaikin of the Los Angeles Times that it has secured 2,727 tickets to the Angels’ home opener in Anaheim, which happens to be against the Astros. You can probably guess what they plan to do at the game. Dodger fans obviously account for most of those numbers, but a few Yankees fans have also reportedly gotten in on the action. Both fanbases saw their teams lose in seven games to the Astros in the 2017 postseason, when MLB commissioner Rob Manfred said the Astros were still cheating.

ESPN’s Sam Miller had fun with stats, showing that you could manipulate interpretation of data to make some amusing claims:

Lie No. 1: Sometime between the end of the 2018 season and the start of the 2019 season, an army of construction workers snuck out to Yankee Stadium in the dark of night. They tore down the stadium. They replaced it with a brand new stadium. They told nobody.

At Fangraphs, Tony Wolfe noted that Zack Britton added a curve to his arsenal:

All of these hitters thought they knew Britton, and I bet you did, too. He’s the sinker demon, one of the best relievers of the last decade not in spite of being one-dimensional, but arguably because of it. He throws nothing but sinkers because that’s all he needs to beat you. But time marches on, and sooner or later, players usually end up needing to adjust, one way or another. Britton’s done that, and that makes him one of the most exciting relievers to pay attention to in 2020. He already once became one of the best pitchers in baseball when everyone knew what pitch was coming. What happens when they don’t?

Joe Torre is taking a step back from his administrative role at MLB. He’s been promoted to special assistant to the commissioner. Who will be head disciplinarian now for MLB? None other than former Royal Chris Young. Also, former Royal Gregor Blanco (not to be confused with Andres Blanco, who we were just talking about last week as the oldest former Royal still playing baseball professionally not named Zack Greinke) is now a Senior Director of Baseball Operations for MLB.

It’s been a few weeks since the last batch of movie reviews, so here’s some new ones for February.

We’ve only talked about the 3DS in passing so let’s pick it apart a little bit. It’s likely going to go down in history as the last major video game handheld. As mobile phones have increased in power and companies have learned how to gamify, well, everything we do, dedicated handheld gaming lost its profitability.

Like so many Nintendo consoles, it was declared dead on arrival by a skeptical gaming public, destined to be the console where Nintendo finally lost their iron grip on the handheld market. Only, like various iterations of the Nintendo DS before it, the Gameboy Advance before it, and the Gameboy before it – it dominated the generation and just printed money. The 3D may have been a passing fad: I mean, seriously, someone give James Cameron a medal or something because Avatar single-handedly created huge perceived markets for 3D TVs, 3D virtual reality, and the 3DS that really have never been realized.

While Nintendo didn’t dominate because of 3D, the console won it’s generation by a nearly 5:1 margin because, at the end of the day, Nintendo just seems to have an innate ability to know what people want to play on handhelds (that they can’t always translate to the living room console space).

Nintendo has always used first party games as tech demos for the system: everything from Star Fox to show off the FX chip to Wii Sports to show users how to control the Wiimote to seemingly every other Kirby iteration (Tilt N Tumble, Canvas Curse, Epic Yarn, etc). For the 3DS, the glasses-free stereoscopic 3D was something amazing to behold and one game showed off those capabilities far beyond any other: Super Mario 3D Land.

This game was a giant love letter to the Super Mario series and Nintendo, in general. It was a beautiful melding of 2D and 3D platforming. There were running, jumping, and flying puzzles that would have felt at home on each of the previous dimensions of Mario games. Consistent with the pick-up-and-put-down nature of handheld gaming, the levels felt “small” and self-contained unlike the open world sprawl from most of the 3D Mario games. There were new elements like the propeller box and throwbacks to older Mario games like the Tanooki suit and even a Zelda-themed level.

The lasting memory I had of Super Mario 3D Land were the levels where you had to do jump puzzles vertically down a level. They looked great in 3D and you even got a little feel of falling. Of course, you can’t see that in this video because, as previously stated, 3D never really took off, but, believe me, you did get a little sense of motion falling down these levels and it was definitely a unique gaming experience.