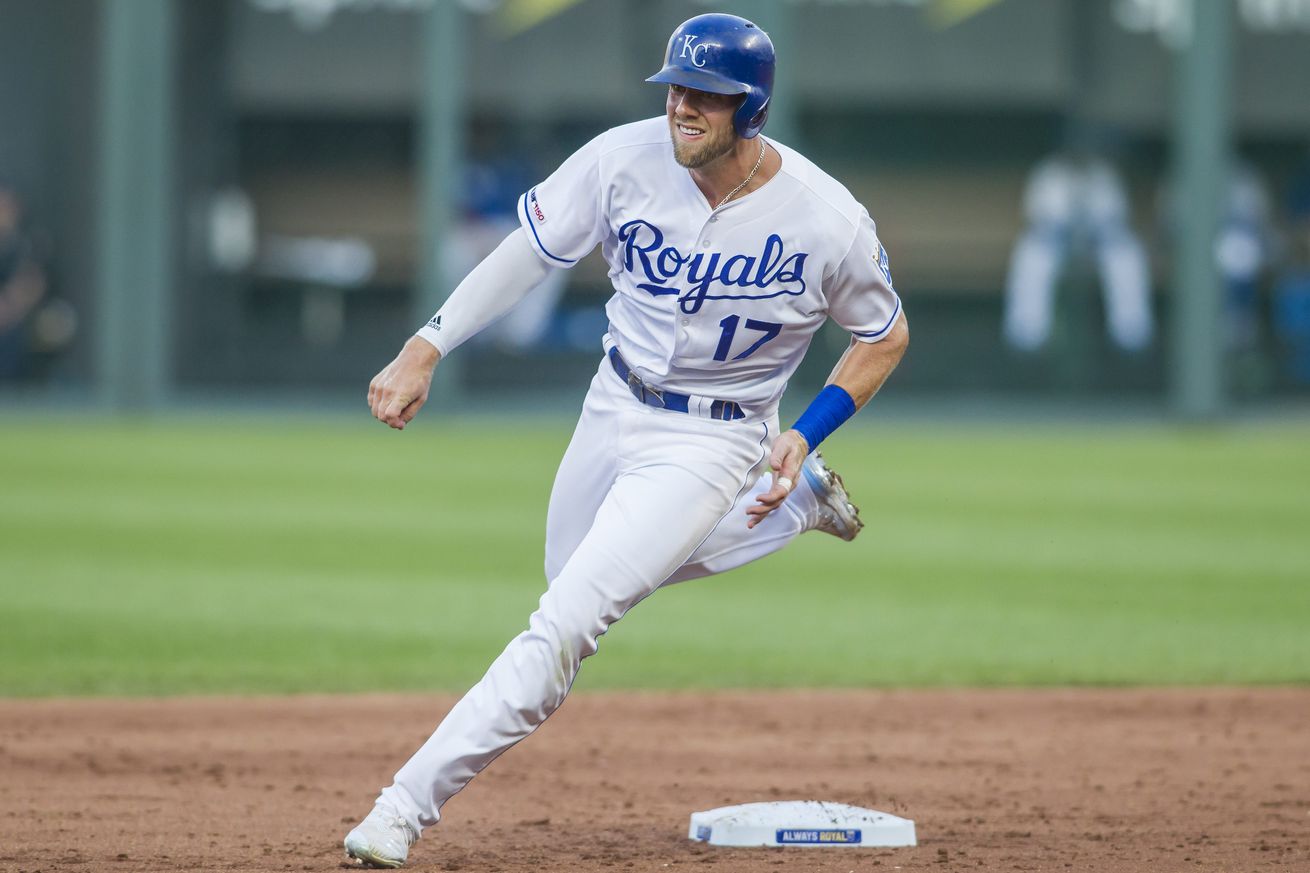 Hunter Dozier could be rhymin’ and stealin’ this year.

Lynn Worthy writes that Whit Merrifield is prepared to be versatile this year.

In recent years, he’s focused less on his outfield play. But Merrifield enters this season knowing his one of his primary positions, at least to start the season, will be center field. He came into spring training with a renewed emphasis on his outfield defense.

”I feel like I earned the second base job the last few years,” Merrifield said. “Probably through my own fault, I assumed that’s where I’d be. But the dynamic of the team is constantly changing, and I understand what I can bring to a team. So I need to do a better job of staying more prepared in different positions. I think I’ve done a good job of that this year.”

“I do believe he’ll get more,” Matheny said. “You know the speed is there. Look at all the triples last year he had. That first [Spring Training] game here, he went first to third on a base hit to center and it wasn’t a gimme. He hit second base in stride. … That guy is an athlete. That guy is the epitome of bigger, faster, stronger. He can really pick up speed when he gets going.”

“For me it’s just trying to really key on that instead of going out and saying I’m going to throw 10-15, 20 pitches to get my arm in shape. It’s going out there with an actual purpose, kind of really trying to feel my lower half in a spot where I can deliver the ball and where I’m not falling over into the dugout or anything.”

Sam Mellinger writes about the return of Alex Gordon.

“I don’t know if this is my last year, but I want to be part of the next round,” he said. “I’ve seen it happen and saw how special it was. I can see we already have talent here and all these young guys coming up to help. It’s like it was in the ‘13 and ‘14 years. Hopefully it can happen a little quicker than it did back in the day, but it’s definitely there. It’s a possibility.”

In his Mellinger Minutes, Sam writes about the difference between this year and previous camps.

Please don’t get the wrong idea. I don’t think the Royals were goofing off the last few springs. They worked. They cared. All that stuff. But it wasn’t like this.

I wrote some about this the last few years but a feeling had emerged in parts of the organization that the big league team had become too loose. That it was happy with 2015, and not working with the same hunger and desperation that existed before.

This is probably obvious but some of that is inevitable, because no big-league team can have its default level of intensity equal to a core of homegrown friends trying to erase a 29-year playoff drought, and it should also be noted that not everyone in the organization saw this as a problem.

Rany Jazayerli writes what will define this season as a success for the Royals.

But this year, there’s no reason not to trade Kennedy to a contending team desperate for bullpen help in the second half. And if the right package of talent presents itself, Moore needs to have the courage to make the trade that is best for the franchise, even if that means trading Whit Merrifield, or Jorge Soler, or Danny Duffy. Trading your best players is painful. But it’s not nearly as painful as a rebuilding project that doesn’t pay off in the end.

Mike Matheny enjoys watching the game from the dugout rather than a chair like many managers do in spring training.

“I’ve kind of always done that,” Matheny said. “I like being involved with the players and to interact with them. I think there are always teaching moments, so it’s easier rather than marching back and forth from the screen.

Scott Blewett learned from a rough year in Omaha.

The Clearing Waivers podcast with Josh Keiser has a new episode out on Royals spring training.

Pitcher Freddy Peralta agrees to a five-year deal with the Brewers.

Yankees pitcher Luis Severino will get Tommy John surgery and miss the 2020 season.

There could be a blitz of pre-arbitration long-term deals this spring.

Is the sign-stealing scandal good for baseball?

The Braves made $476 million in revenues last year according to public statements.

Miami will host the finals of the World Baseball Classic next year.

Tim Tebow will play for the Philipines in qualifying for the WBC.

A Red Sox prospect goes into quarantine under fears of coronavirus.

The best ways to gain weight for the NFL Combine.

The coronavirus may end up cancelling the Summer Olympics in Tokyo.

Airpods are ruining your ears.

How some Reddit users shake up the stock market.

Stephen Spielberg is out as director for the next Indiana Jones film.

Your song of the day is The Beastie Boys with Rhymin’ and Stealin’.