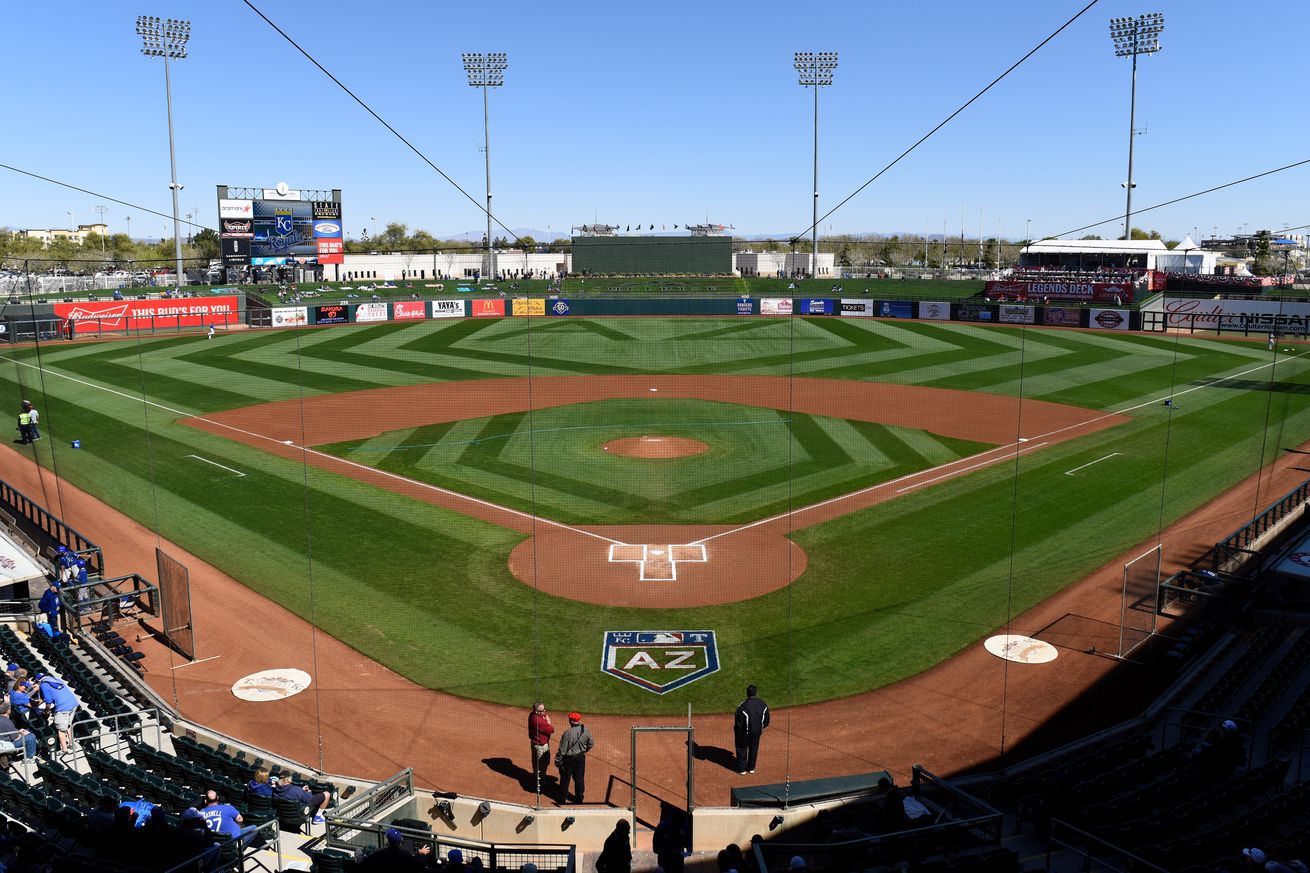 For those who were unaware, the Royals and Rangers get the first game of Spring Training today, starting at 2:05 Royal Standard Time. So welcome to Spring Training Opening Day (yes, I know that’s not a thing but I don’t care)

The Athletic (sub required) has woken back up

NEW — At the end of the 2019 season, Brad Keller and pitching coach Cal Eldred agreed: Keller should develop a curveball.

Here’s how and why he’s done it in mere months:https://t.co/aBpSwqkfh2

Baseball America (sub required) dropped their Top 30 Prospect Lists for each team, including the Royals. YOU WON’T BELIEVE WHO IS #1!!! Actually, you probably will. I’ll just say that he may not have any anagram nicknames.

The Associated Press has an article about Maikel Franco.

Franco became more of a groundball hitter last season as his offense tapered off. The Royals are trying to get him to hit the ball more in the air. “That’s what they have me working on,” Franco said. “I put a lot of work on that in the offseason. At the end of the day, you have to make an adjustment, so that’s what I’ve been doing right now.”

A couple of weeks ago, there was a story in Rumblings about Pine Tar Game memorabilia going to auction. As of yesterday, the top bid for George Brett’s jersey was over $100K.

Shawn Childs at Sports Illustrated wrote a 2020 Fantasy Baseball preview for the Royals.

Fangraphs published their playoff odds and the Royals are featured prominently in the article about them… well, sort of. They only have an 0.7% chance of making the playoffs (“so you’re saying there’s a chance!”), but they are projected to win 72 wins, despite only having the talent of a 68 win team.

It’s a mixed bag of teams. The Royals don’t have a notable bullpen or any obvious reason they should outperform, but they do have a pretty easy schedule. Even though they don’t get to play the Royals (bad luck!), the AL Central is pretty soft. And their lineup benefits from stacking up contact-centric players with speed; WAR might treat events as context-neutral, but in the context of having fast guys who get on base, putting the ball in play and limiting strikeouts is good. BaseRuns, which drives our projected win totals, knows that. Between the schedule and the lineup effects, I can see why the Royals do well.

I enjoy linking to non-standard outlets and this is the first time I can remember using KSHB 41. A story written by “41 Action News Staff” (that’s a weird name) talks about the Royals pitching prospects in Spring Training:

Four of the Royals’ top-rated pitching prospects — Brady Singer, Jackson Kower, Daniel Lynch and Kris Bubic — were all top-40 picks in the 2018 MLB Draft. The four pitchers have performed well in the minor league system and they’ve taken it upon themselves to go through spring training together, sharing not only the experience, but a home while in Arizona as well. “There’s four bedrooms,” said left-handed pitcher Lynch. “There’s a nice little living area downstairs where we hangout, so it works out nice.”

Darin Watson at UL’s Toothpick with his monthly article. It’s another good one, profiling Joe Foy, one of the Royals picks in the expansion draft.

I suppose the good thing about being an expansion team is you have few untouchable players. Foy had enjoyed a good season, but the Royals were willing to deal him. On December 3, 1969, he became part of perhaps the biggest heist in team history. Foy returned home to New York in exchange for Otis and pitcher Bob Johnson. Johnson made 26 starts for the Royals in 1970, going 8-13 despite a 3.07 ERA. And then the Royals packaged him in a deal with Pittsburgh for shortstop Freddie Patek. Just like that, the Royals had two key pieces in their three division winning teams in the 1970s.

Kevin O’Brien at The Royals Reporter with a trio of new articles:

At Fansided, KC Kingdom didn’t have any new articles yesterday but KOK did:

We even have a listicle! Dayn Perry at CBS Sports looks at “Each team’s most interesting forecast heading into the new season”:

The Royals will be bad this season, but to hear SportsLine tell is they’ll also have MLB’s only 50-homer guy in 2020. Soler led the AL with 48 last season, so this isn’t exactly a reach. Will the Royals trade him about late July? They tend not to do such things under GM Dayton Moore, but plenty of contenders would love to have Soler’s thump in the lineup.

Frustrated, tortured Will is often the best Will. We can just picture Will* in some darkened Dickensian hovel, hunched over a typewriter, furiously banging out prose. When a paragraph isn’t to his exacting standards, there’s a grind, a ding, and a crumple before he starts anew. We feel bad about showcasing his pain, of course, not enough to not do it but it’s also some of his best writing.

*(ed note: I have no idea what he looks like)

I had forgotten about the backdrop to this story, which was one of the many battles in the traditional media versus basement bloggers wars. On Bob Costas’s TV show, Buzz Bissinger had tried to take Will Leitch to task about the caustic unprofessional nature of the internet blogosphere by, well, being caustic and unprofessional. It was a big deal at the time, I guess. And Will superimposed this on ESPN basically copying his idea from The Battle of Grass Creek.

The funny thing, is that the most upsetting bit about being a blogger is that, for some terrible reason, about once a month I get word from Michael Wilbon or Bill Simmons or Rick Reilly or now, Buzz Bissinger, that I’m an ignorant, no-talent hack who lives in his mother’s basement , hates civility, breeds cruelty and regularly butchers the English language. As regularly gets pointed out, the unmistakable vitriol in many of these blasts bespeaks a clear sense of being threatened, which is both understandable and ironic. But it’s also just dumb. Really really dumb and tiring. It’s about the same as Steve Nash showing up at a middle school, yelling at everyone that they can’t shoot free throws, challenging one kid to a contest and then pumping his chest.

Yes, the “an oral history” thing is overdone, but MLB.com’s Adam McCalvy had a fun look back at the 2000 USA Olympic baseball team that won gold.

The 2000 Summer Games in Sydney marked the first time that professionals were eligible for the Olympic baseball tournament. But this Team USA was no Dream Team. Major League Baseball’s schedule got in the way. Instead, USA Baseball spent months selecting a team comprised of Minor League prospects, journeymen and players somewhere in between, led by Tommy Lasorda, the legendary Dodgers manager and All-American showman. In the other corner was Cuba, a seemingly unstoppable force of international baseball that had swept through the previous two Olympic tournaments in 1992 and ’96 without a single defeat.

I seem to remember that the acronym for “I Am Not A Lawyer” was not a good one last time we used it. That said, let’s assume that I am not a lawyer so I’m just going to post the headline here and link to the story so you can make your own judgements: “Baseball Fan Can Sue Over Foul Ball to the Face, California Appeals Court Rules”

No. 36 in the Baseball 100 seems too good to be true: Christy Mathewson. https://t.co/jfRC1SsasG

Today’s song of the day is, well not a song, but a clip we all know well. Of course, I’m posting it today for selfish reasons: this is the only time I’m going to get to use it this year. Pitchers and catchers reported on a Wednesday, Opening Day is on a Thursday, and so is the Royals home opener. It’s the only time a major early season baseball day falls on a Friday. So, enjoy. Or if you’re a monster like Craig Calcaterra, don’t