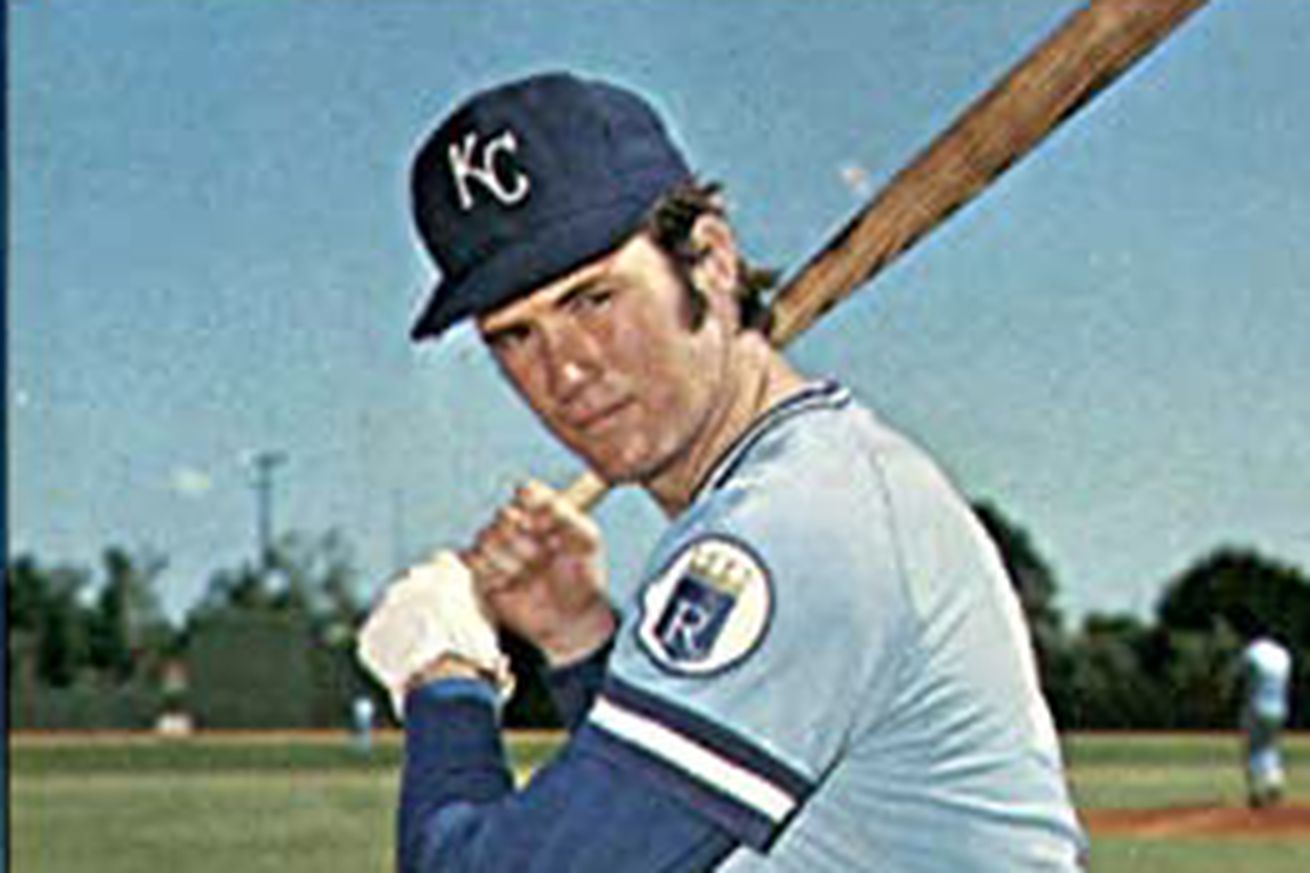 What is it with the 1969 Royals and catchers who have names commonly associated with females? First, they drafted an Ellie. Then with their 28th selection (#56 overall) they took a Fran. The Fran was Francis Healy, who I’m sure was named after his uncle, Francis Healy, who was a catcher for John McGraw’s New York Giants from 1930 to 1932, and for the World Series champion Gas House gang Cardinals in 1934. The senior Healy, a devout Catholic, was tutored by McGraw, who believed he could be molded into another Mel Ott.

Both Healys were natives of Holyoke, Massachusetts, which was the birthplace of volleyball and home to famed sportscaster Jack Buck and former Atlanta Braves pitcher Mark Wohlers.

After graduating from Holyoke High School, Healy signed a free agent deal for $40,000 with the Cleveland Indians. He was signed by Hoot Evers, who in addition to having one of the all-time great baseball names, was a bit of a legend himself. Healy started his professional career at Class A Dubuque (IA) of the Midwest League and progressed through the Indians system with stops at Pawtucket and Waterbury in 1967 and 1968. The Indians left him unprotected and Kansas City tabbed him with their 28th pick.

Healy spent most of 1969 at Omaha, where he hit a respectable .282 and displayed a strong throwing arm. He was a late season call up to the Royals and on September 3, 1969 made his Major League debut. He singled in his first at-bat against the Tigers ace Denny McLain. He added another single off McLain later in the game. He saw action in six games and batted .400.

During spring training in 1970, Healy developed a case of the yips and struggled throwing the ball back to the pitcher. Kansas City sent him back to Omaha to work on the affliction. Omaha manager Jack McKeon took a shine to Healy and the two developed a close friendship. Healy hit .294 for Omaha but did not see any action with the big-league club in 1970. The Royals were out of options on Healy, so instead of losing him in the minor league draft, they traded him to the San Francisco Giants for pitcher Bob Garibaldi. Garibaldi never pitched a game for the Royals, who shipped him off to the Padres for pitcher Mike Jackson in April of 1971. Garibaldi did get a baseball card in the 1971 set showing him in a Royals uniform. Healy served primarily as a backup to Dick Dietz and Dave Rader in San Fran but did appear in 92 games over the course of the 1971 and 1972 seasons.

Meanwhile, changes were occurring in Kansas City. Owner Ewing Kauffman felt that popular manager Bob Lemon was too old for the job and wanted to make a change. Even though Lemon was only 51, Kauffman publicly stated that he wanted to bring in a younger man, specifically McKeon, who he feared losing to another team. McKeon was 42, not that much younger than Lemon, but Kauffman made the change. Kauffman got off cheap on the resulting age discrimination suit, settling with Lemon for one more year of salary.

Once “Trader Jack” was installed in the catbird seat, he decided he needed more Fran Healy. Pushed by McKeon to make a trade, Cedric Tallis sent a promising young pitcher named Greg Minton to the Giants for Healy. The trade was a stinker for the Royals. Minton went on to a solid 16-year career, appearing in 710 games while saving 150.

Reunited with McKeon, Healy played in 95 games for the 1973 Royals and hit .276 with six home runs. He had two hitting steaks of eight and eleven games in the second half of the season and looked like he could be the answer to Kansas City’s catching woes. He certainly looked the part. Healy was a big man for a catcher, 6’5 and 220 pounds.

Healy also had the distinction of catching both of Steve Busby’s no-hitters in 1973 and 1974.

In 1975, Healy was injured in the second game of the season during a collision at home plate with Tommy Harper. The injury, to his Achilles tendon, nagged him for the remainder of the season. Healy hit a pedestrian .255 in only 56 games, with little power.

I recall seeing Healy play in 1975 in a game against the White Sox. It was July 6, and even though the Royals came into the game at 45-35, they were already five games back of the hated Oakland A’s.

I’m not sure what the temperature was that afternoon, but it felt like it was 110. Nothing went right for the Royals. Marty Pattin, who had been acquired in a trade for the popular Dick Drago, got lacerated for seven hits and four runs in 1 2⁄3 innings of work. He was followed by Steve Mingori, Lindy McDaniel and Doug Bird who collectively gave up ten more hits and four more runs. The Royals, meanwhile, could not get anything going against Claude Osteen, who scattered six hits and three runs in a complete game victory. The game did have some merit. Our tickets were directly behind the White Sox dugout, which afforded good interaction with the players. Amazingly, those seats, called Field Box seats, were only $5.00.

The Sox had some interesting players, including Bucky Dent, Ken Henderson, Goose Gossage and Bill Melton. Johnny Sain was one of their coaches. The Royals also had McDaniel and future Hall of Famer Harmon Killebrew, who hit a single in the second inning.

The play that sticks out in my mind though, 45 years later, involved Fran Healy. I don’t remember what inning it occurred or who the batter was, but a White Sox hit a towering foul pop behind the plate. The entire play unfolded just feet from where we were sitting. Healy threw off the mask and looking up into the bright sun, settled under the ball. It hit him in the mitt…and popped out. The entire stadium, roasting in the July heat, let out a collective groan then fell silent. Except for a young man sitting a few seats behind me. He cupped his hands to his mouth and shouted in a voice that carried through the quiet stadium, “Healy you suck!”

Healy paused briefly and looked into the stands at his roaster, who continued his barrage. Several of the players wives, who were seated directly across the isle from us, flinched and glared at the man. My buddy Dennis and I looked at each other and I said, “Well, he’s right.”

Healy ended the game 0-for3 with a walk. On July 9, Gorman Thomas of the Brewers bowled over Healy at a play at the plate, injuring Healy’s back. That injury effectively ended his 1975 season.

Healy won the starting job out of spring training in 1976, but after hitting only .125 in eight games, was benched in favor of Buck Martinez. Healy asked for a trade to an East Coast team, so he could be closer to home. The Royals got this trade right, sending Healy to the New York Yankees for a left-handed pitcher named Larry Gura.

Healy would play in 74 games over the 1976, 1977 and 1978 seasons as a backup to Thurman Munson. Those Yankees of course, beat the Royals in the American League Championship Series each of those seasons and won two World Series titles. Gura went on to a storied career in Kansas City, culminating in his selection to the Royals Hall of Fame.

Healy’s biggest contribution to the Yankees was his maturity and problem-solving ability, specifically serving as a buffer between volatile stars Munson and Reggie Jackson and their hypersensitive manager Billy Martin. Healy was often the person to deliver bad news and keep the warring parties separated. Suffering from recurring neck problems, Healy asked the Yankees to release him in late April of 1978.

He almost immediately went to the broadcast booth, where over the years he earned laurels calling games for the Yankees and later the Mets. Most recently, Healy can be seen hosting the sports themed talk show Focused.