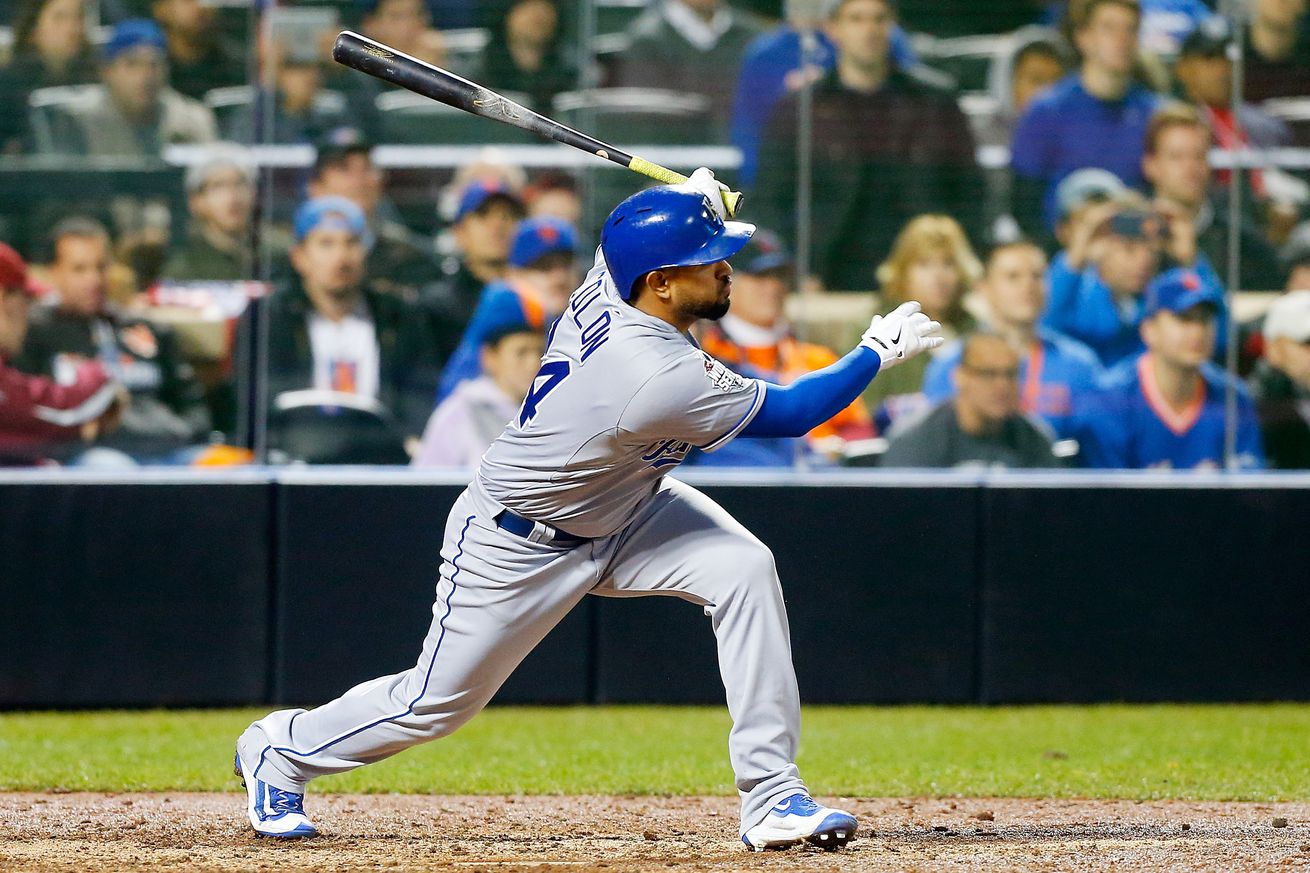 Jarrod Dyson stood on the bag, hands on his hips, talking to the third base coach Mike Jirschele. Of all the bases he’d stolen in his career, the next 90 feet would top the list in importance. It was a 2-2 game in the top of the 12th inning, but more importantly, it was in Game 5 of the 2015 World Series.

With one out and the pitcher’s spot due up, Kansas City manager Ned Yost needed someone to bat in place of Luke Hochevar. His options were limited. It came down to Drew Butera, a 20-year-old rookie named Raul Mondesi, and a player who hadn’t recorded an at-bat in four weeks, Christian Colón,

Colón was a utility infielder drafted fourth overall out of Cal State Fullerton in the 2010 MLB draft. He was picked right after Bryce Harper and Manny Machado, two players combining to make over $50-million in 2020. But Colón had something they didn’t – a lifetime batting average of 1.000 in the post-season.

For Yost, the choice was easy. Colón had been in this position before. A position nearly identical to the upcoming one. In the bottom of the 12th inning of the Wild Card game, Colón was asked to pinch hit with a runner at third and one out. He delivered by sending a high chopper to former Oakland third baseman Josh Donaldson, who couldn’t make the play before Eric Hosmer slid head first into home. However, one year later, Kansas City was tied and not trailing.

As Colón approached the plate, he adjusted his solid white Nike batting gloves to fit tightly around his hands. With his bat tucked firmly under his right arm, he eye-balled where each Mets infielder was positioned. Out of respect of Dyson’s speed, they played on the edge of the infield grass, hoping to cut down the Royals’ speedster on a contact play.

Out on the mound, Addison Reed, a right-hander dealt from Arizona earlier in the season, stomped at the dirt surrounding the rubber. He didn’t appear nervous, but the magnitude of the moment was too much to tune out. The Royals had seen their fair share of Reed during his three-year stint with the White Sox from 2011-2013. But there wasn’t a previous encounter that would top what would come next.

Colón dug into the box, wiggled his bat, and bent at the knees. Up in the booth, the FOX broadcasting team marveled at the position Colón found himself in.

Reed set at the waist and tossed in an 86-mph slider. Strike one. Citi Field erupted as the ball was fired back to the pitcher. As Reed climbed back on the mound, Colón swiped at the dirt in the back of the batters box with his left foot. During the regular season, he had been down in the count 0-1 twelve times. He was successful four times for a .333 batting average.

Seeing how Colón reacted to his first slider, Reed decided spin another down and out of the strike zone. Colón attempted to hold up but to no avail. Strike two.

The former first-rounder stepped out and re-adjusted his gloves. The crowd rose to their feet as the Mets were one strike away from securing the biggest out of the night.

Sticking with the off-speed, Reed elected to trust his slider for a third consecutive pitch. Locating it in the same spot as the previous one, Reed buried the ball in the back of the left-handed batter’s box. This time, Colón held up. Ball one.

Colón knocked off the clay stuck to his cleats and readied. Mets’ catcher Travis d’Arnaud lowered to the outside corner, signaling for a fourth straight slider down and away. But Reed missed the spot. Leaving it up and out over the plate, Colón took a rip and fouled off to the right side. He was behind and under the pitch.

Back in the booth, former major league second baseman Harold Reynolds reminded everyone how difficult it was for right-handers to make contact off Reed.

“Talk about a tough {at-bat},” Reynolds said. “{Reed’s} delivery basically steps at the right-handed hitter. To throw that slider bearing down and away is a tough pitch to hit.”

But there was one stat that made Reed vulnerable in these situations throughout the year. When the pressure was on, he could be known to waver. Reed entered a high-leverage situation 31 times in 2015. Of those games, hitters posted a slash line of .284/.365/.395. Their batting average on balls in play was .375.

The ball sailed over Wilmer Flores at shortstop.

“Colon delivers into left!” Joe Buck yelled in the studio.

Dyson trotted home and pumped his fist. The Royals’ dugout had scattered into foul territory, screaming, shouting, and pointing to Colón at first.

When Colón retreated to first base, he acknowledged his teammates by pointing back with both hands and pounding his chest twice. With the national broadcast fixated on his reaction, the microphones on the field captured a memorable moment between Colón and first base coach Rusty Kuntz.

“Gimme some, atta boy!” Kuntz said as he high-fived Colón.

Colón shouted “lets go” back to his teammates.

Mets’ pitcher Matt Harvey, who was drafted three spots after Colón, watched helplessly from the dugout. In a shocking turn of events that unfolded over a few hours, it would be Colón getting Kansas City a World Series ring and not Harvey doing the same for New York.

His career in Kansas City may not have finished the way many hoped, but Colón’s game-winning hit in Game 5 of the World Series will go down as one of the top moments in Royals’ postseason history.