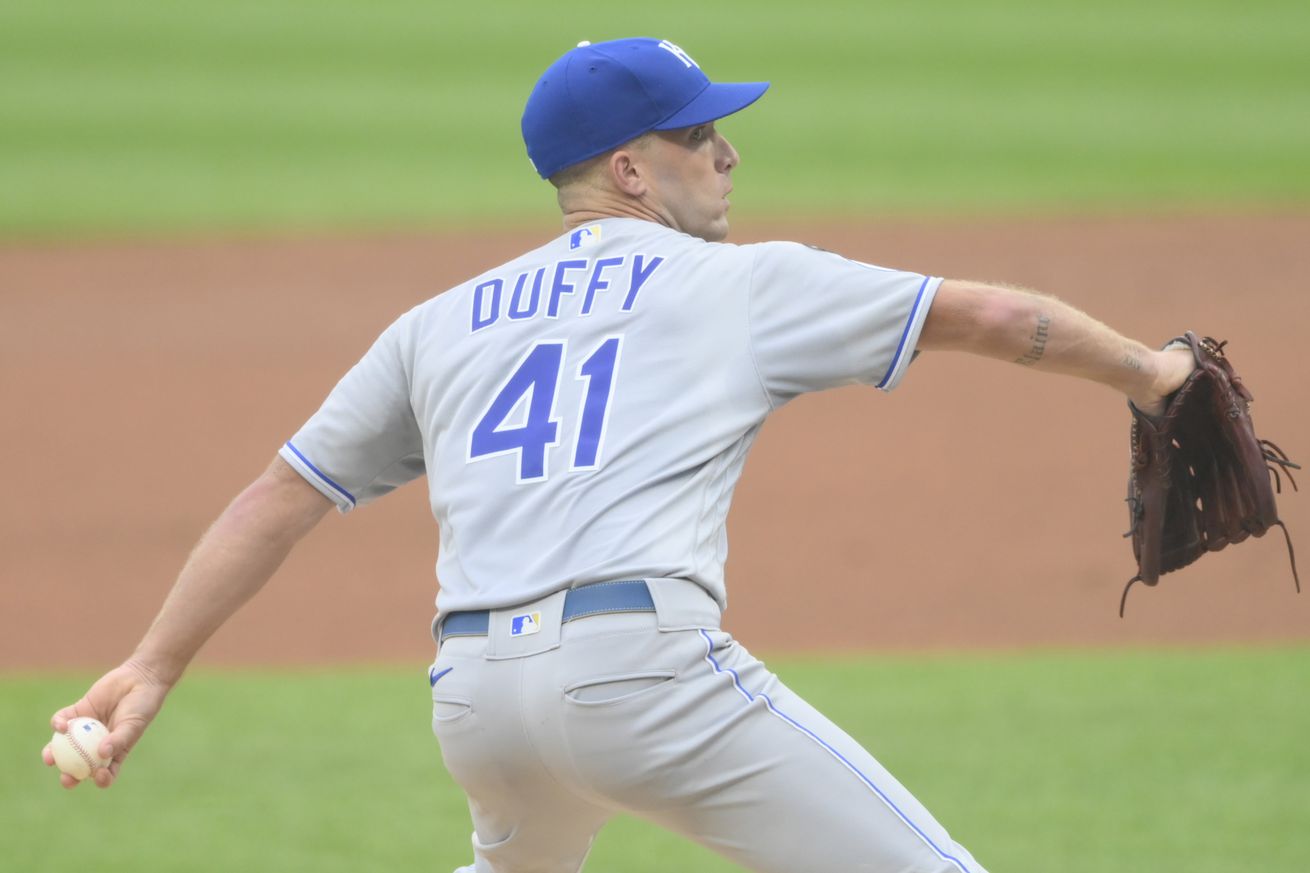 “We win one tomorrow, that’s called a winning streak.”

The Royals salvaged at least a split of the four-game series with Cleveland by taking down the Tribe 3-0 on Wednesday.

For the first time since the season opener, Danny Duffy took the mound at Progressive Field. Facing a struggling Indians offense, Duffy worked through the first four innings without much trouble.

On the other side, Carlos Carrasco was doing the same to Royals hitters. The 11-year veteran gave up a lead-off single to Whit Merrifield and then proceeded to dominate over the next five innings.

The two pitchers cruised through the opposing lineups until the bottom of the fifth inning. The Indians opened the frame by smacking back-to-back singles off Duffy. With the heart of the order coming up, the left-hander was on the ropes. Two batters later, Duffy walked José Ramírez on four pitches. However, the Cleveland third baseman received some help from home plate umpire James Hoye.

What he hell are we doing here? pic.twitter.com/I5aJd0jN5f

Here was a strike called (5) on Maikel Franco with a runner in scoring position in the top of the first.

With the bases loaded and one out, Francisco Lindor came to the plate to break the scoreless tie. But Duffy got Lindor to fly out to shallow center field for the second out. In the next at-bat, Duffy got ahead on Oscar Mercado 1-2 and punched him out on a breaking pitch. The left-hander roared toward the Royals’ dugout as he left the mound.

Kansas City made the Tribe pay in the top of the sixth. The Royals opened the inning with back-to-back singles from Cam Gallagher and Merrifield. Adalberto Mondesi, who came in on a five-game hitting streak, roped a single to right-center field to put Kansas City up 1-0.

A scoreless game no more! Mondi drives in Gallagher and the #Royals are on the board in the sixth. #AlwaysRoyal
TV: FSKC
Stream: FSGO – https://t.co/7YVeTlQovO pic.twitter.com/VBg309Kxwo

Duffy was pulled with two outs in the sixth inning and Jesse Hahn came on to record the final out. Duffy allowed no runs on four hits and struck out four. Hahn tossed a clean seventh inning to maintain the Royals’ slim lead.

In the bottom of the eighth, Josh Staumont entered with the hopes of erasing the memory of Sunday’s outing. The “man-bun” bounced back with a perfect inning and recorded a strike out of Tyler Naquin on a 101 mph fastball.

The Royals added some much needed insurance in the top of the ninth. Edward Olivares stayed red-hot by ripping a two-strike triple to score Alex Gordon. He’s hit safely in all six games with Kansas City and has four multi-hit games (10-for-24, .416). Nicky Lopez notched his third hit of the night on a single to left field to make it 3-0. Greg Holland came on in the bottom half and earned his 148th career save as a Royal.

Stay hot, Edward Olivares! The rookie triples (with the help of an extremely weird bounce), Gordo scores from first and the #Royals put another run on the board. #AlwaysRoyal
TV: FSKC
Stream: FSGO – https://t.co/7YVeTlQovO pic.twitter.com/PapDYUUJlx

The Royals, now 16-28, will go for the series win tomorrow and finish the season series with a 5-5 split. Brady Singer will go toe-to-toe with Adam Civale. First pitch is slated for 5:10 p.m. CDT on FSKC.

If they win tomorrow…..