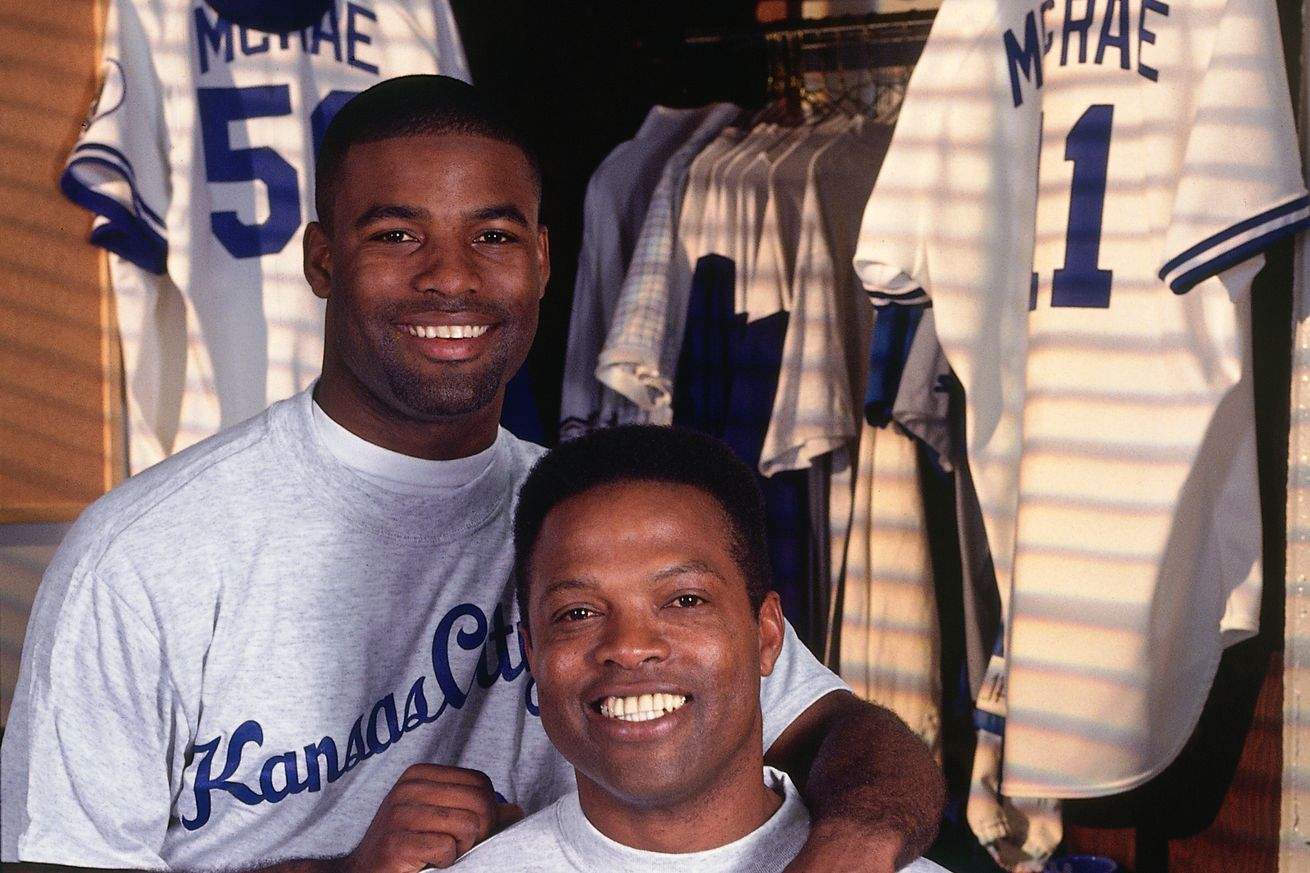 Second-round match-ups from the Fleeting Glory and Personalities regions

While we continue to wait for baseball to return to the field, the best we have now is to cherish memories of seasons and players past. These brackets are a vehicle for isolating some of the memories that make us smile the most.

Entering the second round, we’re matching up more pan-flashes and playoff heroes in the Fleeting Glory region as well as the semifinals for #AlwaysRoyal and Characters and Clowns in the Personalities regions.

Here’s how these brackets stand now:

Facing 1970s outfielder Tom Poquette, 1994 AL Rookie of the Year Bob Hamelin had an easy first round win. The Royals have had some beloved bespectacled players. What would be the All-Star team? (Off the top of my head)…

One of my favorite memories going to a Royals game was going to one of the last games before the ‘94 strike. The Royals’ winning streak had just ended, and they were playing the Mariners at home in a game that had been rescheduled for KC because of problems with the Kingdome roof. All the seats were general admission. The crowd was wild. Bob Hamelin went deep early, and the stadium erupted. The Royals lost that game, but I remember the foam hammers. For a brief time, The Hammer was a phenomenon.

Paul Byrd has continued to demonstrate that he gained quite a following in his short stint with the Royals. He handled the play-in match-up with Luis Aquino and the first-round match-up against Mark Quinn very easily. Will it last?

Mike Aviles easily topped Aaron Guiel in the first round, setting up a match-up with another Royals right fielder with a short window of success. Paulo Orlando reaches the semifinals here after surviving both a play-in bout with Cheslor Cuthbert and a first-round tilt with Angel Berroa, the first Rookie of the Year to fall.

Both of these guys survived first-round match-ups against guys with flashier postseason heroics: Johnny Cueto as the rented ace turning in two masterful performances and Christian Colon making the most of his 12th-inning opportunities. Morales and Young, however, were more consistent in the Royals’ run to the 2015 title, and each had their big moments as well.

Both got off to crappy starts in 2016, Morales in the second season in his two-year deal and Young having been re-signed to a two-year deal. On Memorial Day, Morales was hitting .187/.258/.310 and Young had been removed from the rotation after posting a 2-5 record with a 6.48 ERA. Their stories diverged drastically from there, with Young continuing to struggle and Morales catching fire in mid-June and going on a 29-game stretch where he hit .369/.444/.699 to turn his season around.

It’s a 2015 rental versus our last remaining 1985 postseason hero. Motley beat out Dane Iorg to advance, and Zobrist slipped past Edinson Volquez in a vote that was painful to many.

It’s clear that Ben Zobrist was a better player than Darryl Motley, but which one accumulated more value as a Royal? The answer is Zobrist, if you trust WAR. He had 264 plate appearances as a Royal and had 1.2 bWAR (1.5 fWAR). Motley had less than one win in 1401 plate appearances in KC. Motley’s WAR, however, is dragged down by his terrible 1986 season. He was almost a 3-win player in his fine 1984, which was key to the Royals’ division title.

Darryl Motley is not the only 1985 Royal left in this tournament; there are several that remain, including both guys in this match-up. Wathan easily bested Jeff Conine in round one, and Bud Black topped Doug Bird without much suspense as well.

Is there a Royal with that holds a more easily identified, matter-of-fact record than John Wathan’s record for most steals by a catcher in a season? Wathan stole 36 bases in 45 attempts in 1982, six more than the second-most, 30 by Hall-of-Famer Ray Schalk in 1916. In fact, many of the other high totals were by Hall-of-Famers, (Schalk, Pudge Rodriguez, Craig Biggio, and Roger Bresnahan). Wathan’s 28 in 1983 is the third-most in history, but he was otherwise awful offensively that year and relinquished the starting job in 1984 to Don Slaught.

The top five starting pitchers in Royals history is pretty cut-and-dried, and they’re all right-handed: Kevin Appier, Bret Saberhagen, Mark Gubicza, Zack Greinke, and Dennis Leonard. The next three are likewise pretty obvious, and they’re all lefties: Larry Gura, Charlie Leibrandt, Paul Splittorff. Bud Black is among the candidates for the last two spots in the top ten, which include three righties (Steve Busby, Al Fitzmorris, and Tom Gordon) and two lefties (Danny Duffy and Black).

Both of these guys easily won against relievers in round one: Sweet Lou over Rusty Meacham and McRae over Steve Farr. Piniella brings strong star power and the distinction of being the first Royal to make a national mark, winning the Rookie of the Year in 1969. McRae brings his strong Royal pedigree, as the son of Royals legend Hal McRae.

Both were outfielders. Both had ups and downs and were traded in lopsided deals that the Royals lost. Both played five seasons in royal blue. How do their KC careers stack up?

They were about even as players, but who was your favorite?

Unlike the other subregions, the ‘characters and clowns’ group went “chalk” in the first round, including Jamie Quirk’s easy win over Dirty Kurt Bevacqua and Brian Bannister’s much closer win over The Mad Hungarian, Al Hrabosky.

Both of these players moved quickly into other roles in baseball once their playing careers were over, with Quirk staying close to the dirt with jobs on coaching staffs and managing in the minor leagues. Bannister took his interest in baseball analytics that he developed as a player and began working in front offices, eventually making his way back to the field as a coach.

Chen reached the second round with a win over flamboyant starter Jose Lima, and Jeremy Guthrie bested his counterpart on the 2014 pennant-winners, Nori Aoki.

These rotation mainstays flamed out of the rotation one year apart, Chen being released just before the stretch drive in 2014, and Guthrie losing his place in the rotation as the 2015 team geared up for the playoffs. Chen had more wins as a Royal (47 to 41) and more starts (113 to 103), but Guthrie had the better ERA (4.38 to 4.53).