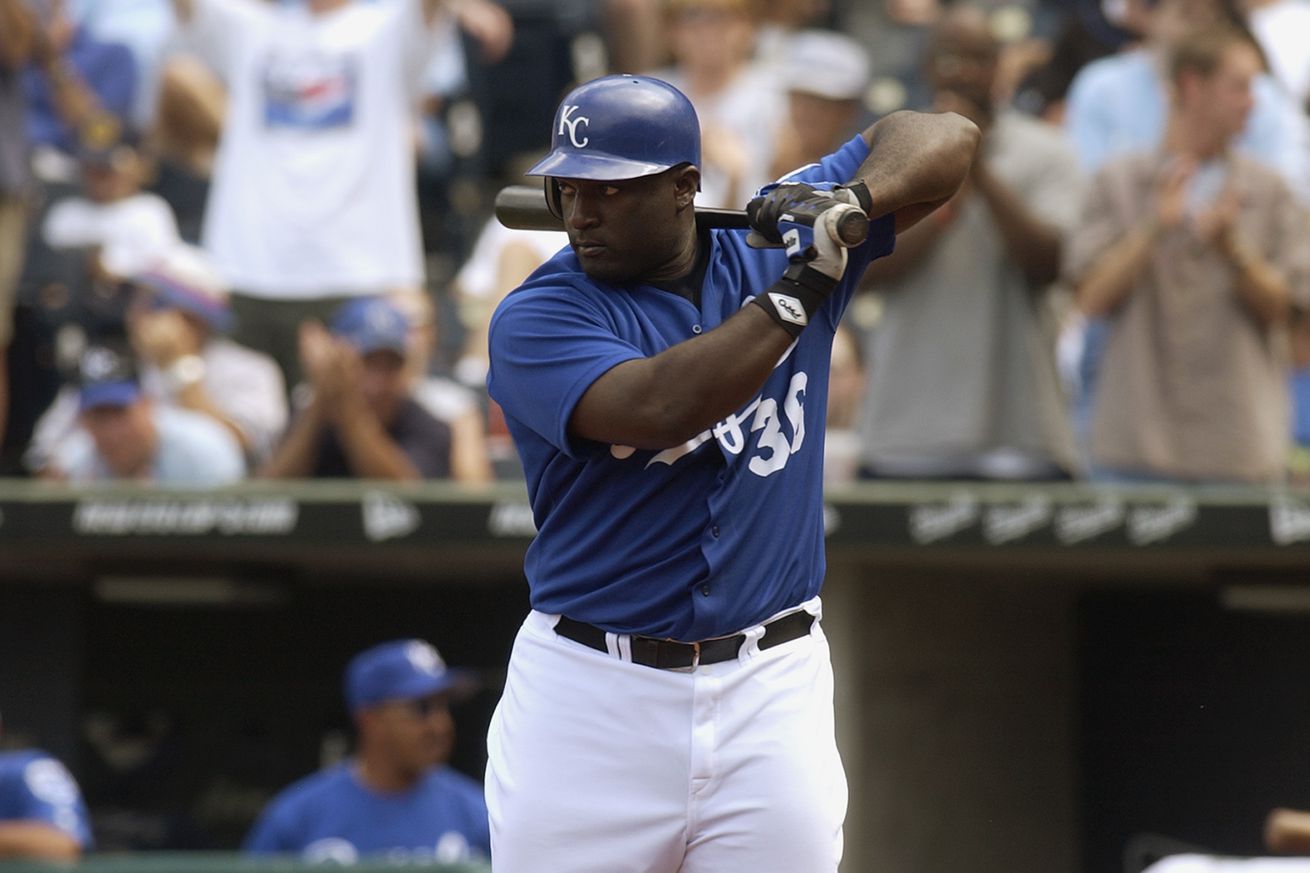 As the most-beloved bracket reaches the Final Four, the bracket for the less prominent Royals is just at its beginning. In my first post, I introduced the first two brackets, the Fleeting Glory bracket, which includes those Royals who were able to endear themselves short-lived or momentary success, and the Personalities bracket. You voted on eight preliminary match-ups to bring each bracket down to sixteen.

There are two more brackets to introduce, and six “play-in” match-ups to decide. So let’s get right to the brackets:

The Lost Causes bracket is for those players for whom Royals fans held high hopes, but for whom those hopes were never fully realized. The two sub-brackets are the “Next Big Thing,” for those highly anticipated prospects whose success was not enduring enough to make the regular bracket. The other subgroup are the “Saber-Darlings,” those players who Royals bloggers promoted and clamored for, but who never really maximized on the (often limited and delayed) opportunities Royals management gave them.

Both of these utility infielders came up with the Braves. Tony Graffanino signed with the Royals after their fluky 2003 season as they tried to fortify their only winning team between 1994 and 2013. Royals bloggers advocated for him as someone who could fortify the team’s weakness at 2B, with the ineffective Carlos Febles departing as a free agent and light-hitting utility man Desi Relaford as the incumbent. Graffanino ended up pulling two tours with the Royals, accumulating 2.8 WAR over 203 games in 2004-06, allowing the Royals to flip him in July deals in consecutive years.

Wilson Betemit was the Royals’ last regular third baseman before Mike Moustakas. He put up a slash line of .290/.362/.468 in 541 plate appearances during the 2010-11 seasons. His playing time was greatly reduced when Moose came up, and the Royals blogosphere was critical of Dayton Moore for waiting to trade him until he had been on the bench for weeks, yielding a couple of guys who never made it to the majors.

Going into the 2005 season, the Royals were facing a decision whether to stick with 2004 All-Star Ken Harvey or give a chance to minor-league veteran Calvin Pickering, who had hit 35 home runs in just 299 AAA at-bats in 2004 and slashed .248/.338/.500 in 142 plate appearances for the Royals at the end of the year. It seemed like an obvious decision, with Fangraphs suggesting Pickering was a good bet for 30+ HR and an .375 OBP. Pickering was the Opening Day DH but he only hit .148 over seven starts before getting demoted, never to reach the Majors again.

When the Royals acquired Justin Huber for a utility man they had purchased from the Devil Rays earlier in the year (some guy named Jose Bautista), many Royals fans were excited at the possibilities. Huber didn’t really have a position, moving from catcher to first base to left field in the minor leagues. He hit .277/.352/.502 in 751 plate appearances with Omaha from 2005-07, but only .204/.255/.245 in 106 plate appearances in Kansas City, “blocked” by guys like Terrance Long, Doug Mientkiewicz, and Ross Gload.

Gary Thurman, the Royals’ first-round pick in the 1983 draft, entered a crowded outfield picture for the Royals in the late 1980s, arriving in 1987 along with Jim Eisenreich, Danny Tartabull, and Bo Jackson. The speedster hit .296 hit his first audition, but he never hit well enough to be a positive contributor, posting a 66 OPS+ over 744 plate appearances from 1987-1992. He did steal 53 bases in 68 attempts.

People latch on to different guys for lots of different reasons. It’s usually the best players, the best interviews, or guys who come through in big situations that earn the most love. Other people gain popularity for utterly random reasons. This bracket has four subgroups: one-tool wonders, funny names, surprises, and “meme guys.”

A third-round pick in the 1979 draft, Pat Sheridan looked more like a member of Lambda Lambda Lambda than a professional athlete. He first earned regular playing time in 1983 and was instrumental in the 1984 run to the division championship, hitting .283 filling in for the suspended Willie Wilson in center before becoming the team’s primary right fielder. He platooned with Darryl Motley in right field in 1985, but he hit poorly. The Royals released him at the end of spring training in 1986. He would later play in another World Series as a member of the 1989 Giants.

In the years immediately following the 1994 strike, the Royals’ transactions resembled a temper tantrum setting out to prove that the team could not compete those economic realities. Even after dumping most of their expensive players before the 1995 season, they still had a brush with contention, leading them to jettison middle-of-the-order hitters Wally Joyner and Gary Gaetti after the season. Who filled the void in the middle of the lineup? Keith Lockhart, of course. He batted third more times (75) than anyone else in 1996, along with an additional eleven times in the cleanup spot. And why not? The infielder had posted a .321 average (.833 OPS) in 1995. He fell off some in 1996 (.273/.319/.411), but there wasn’t much else to choose from. He was packaged with Michael Tucker for Jermaine Dye after the season.

The 2006 Royals were terrible, but there were a few bright spots. Among them was 28-year-old utility man Esteban German, who played a little 2B, 3B, LF and CF, while hitting an incredible .326/.422/.459 in 331 plate appearances. He never really had a position he played all that well, and his hitting declined each of his two remaining seasons in Kansas City. He ended up with 978 plate appearances and 1.8 WAR for the Royals from 2006-2008.

It might not be fair to characterize David Lough as a one-tool wonder, since he did hit .286 in his rookie season as a Royal, but it was an empty .286, and the great majority of his value in his career came from his outstanding outfield defense. Lough posted 2.4 WAR in 335 plate appearances in 2013, earning some down-ballot Rookie of the Year votes. The Royals flipped him for Danny Valencia after the season, and he appeared for the Orioles against the Royals in the 2014 ALCS.

Terrance Gore began as a rumor, the rumor of a base-stealing savant who could be the weapon off the bench that track star Herb Washington was supposed to be in the 1970s. Then he appeared on the Royals in September of 2014 and he stole 5 bases and scored 5 runs in 11 games, then three more bases and scored two more runs in the postseason. Ned Yost was so addicted to the possibilities that Gore made the Opening Day roster on more than one occasion, including last year after the Royals brought him back on a Major League free agent contract. If you only looked at Gore’s perfectly respectable 2019 slash line (.275/.362/.353), you’d think it was a success, but teams had figured something out about Gore early in the season, when he was caught stealing five times and picked off another three times. He was sold to the Yankees in July, but he was never added to the big league roster.

Go ahead and vote, and make your case for your favorites in the comments!