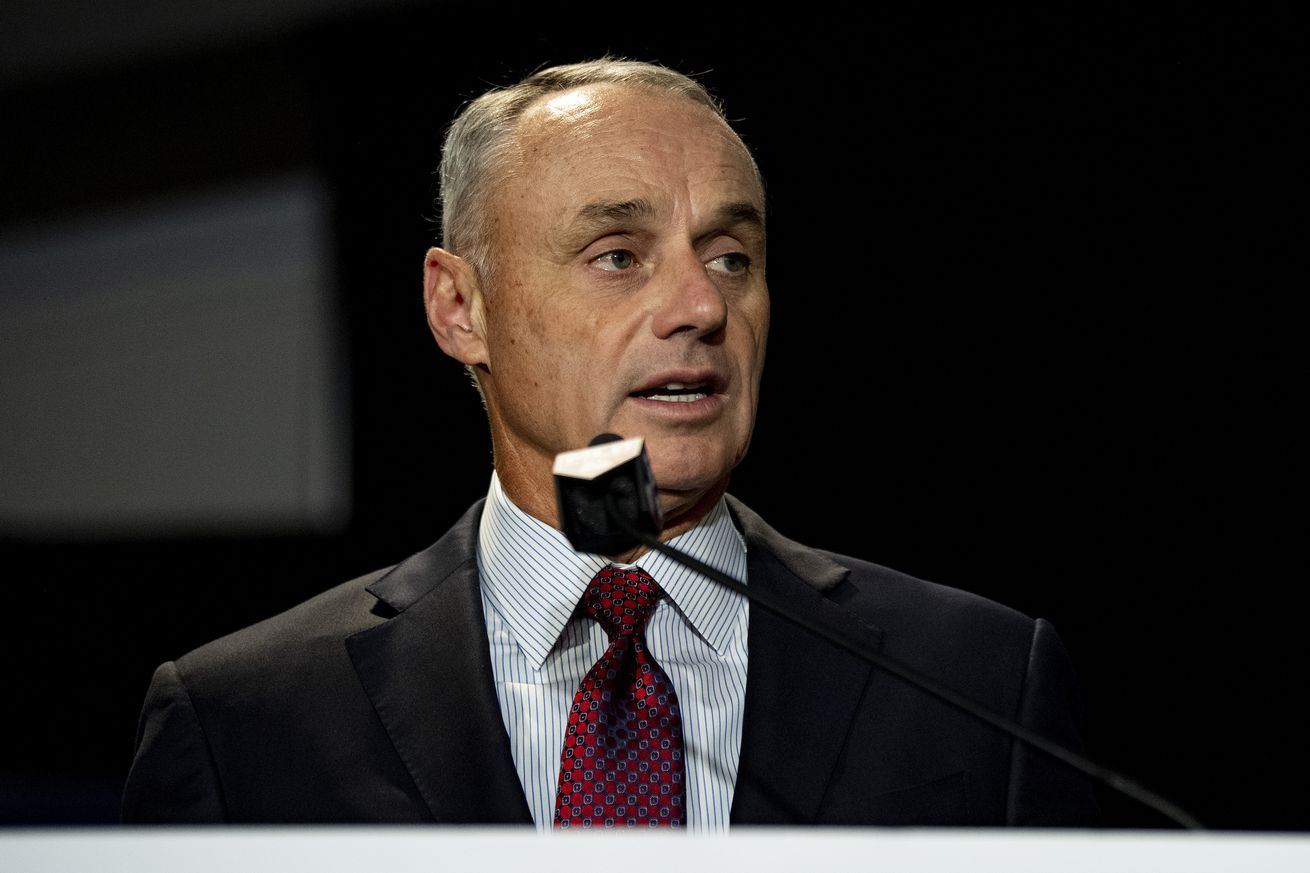 Get your priorities straight, Mr. Commissioner.

Baseball Commissioner Rob Manfred is full of ideas. Since he has taken over he has floated everything from banning defensive shifts to a pitch clock to having runners begin at second base in extra innings to axing 42 minor league clubs. While some ideas have merit, most of the ideas have been welcomed with a mixed reception, at best.

The latest idea from Manfred would shake up how the playoff system is structured. According to Joel Sherman of the New York Post, MLB is considering expanding the playoffs to seven teams by 2022. The top team would get a first-round bye, with two division winners and four Wild Card teams battling in the first round. MLB would add a twist, with the top division winner playing in that round being able to select their opponent, followed by the other division winner selecting their opponent, to be aired in a “selection show.” The remaining two Wild Cards would be left to play each other. The first round would be a best-of-three series, with all three games hosted by the higher seed. The only thing missing from this convoluted setup is the Iowa Caucus app to convert playoff wins into State Delegate Equivalents.

The move would be presumably to give more teams a chance for the post-season, keeping fan interest throughout the summer and reducing the incentive to “tank.” It gives MLB more playoff games to offer television partners, which generate millions in revenue without having to pay players. It gives an incentive to finish with the top record, and eliminates the one-game Wild Card many teams decry. The selection show also adds programming to help market the game and generate interest, akin to the NCAA tournament selection show.

Fans seemed a bit less than open to the idea on Twitter.

Manfred just gets the fanbase. pic.twitter.com/bMRMXbpTD4

Baseball fans, especially the hardline purists, have been accused of being too conservative, too resistant to change. For MLB’s first half century, the leagues and teams stayed exactly the same, with the top team in each eight-team league meeting in the World Series, no Wild Cards, no divisions, nothing. After some relocations in the 1950s and 60s, baseball began expanding and splitting into divisions. In the 90s, they split into three divisions and added a Wild Card, and in 2012, they added a second Wild Card with a one-game Wild Card playoff.

Part of why baseball fans resist change, at least to the playoff structure, is because of the importance it places on the regular season. Reaching the post-season has become so watered down in other sports, with half the league making it in the NBA, rendering the regular season near useless. The NCAA has become a participation trophy factory with half the FCS football teams handed bowl game berths, with some basketball coaches pushing for a similar fate in proposing the tournament expand to 128 teams.

Making it difficult to reach the playoffs puts extra meaning on the regular season. It seems rather counterproductive to have 162 games to determine that Team A is superior to Team B only to say that in a five-game series, Team B is better because they won three games. Baseball fans have had to accept a certain level of this, but introducing even more playoff teams only adds the likelihood that a losing team would make the playoffs and have a chance to take out one of the top teams. In fact, had this been implemented the last few seasons, the 2017 Royals, with their 80-82 record, would not only have made the playoffs, they wouldn’t have even necessarily been the last seed.

Under the proposed system:

The notion that teams would avoid tanking in order to grab a Wild Card spot is also rather dubious. Most of the smarter front offices would rather rebuild in the hopes of creating a behemoth rather than hope they can sneak into the playoffs with a 79-win team, not to mention many owners would rather reduce payroll to rebuild rather than spend to make a playoff where they don’t even host a playoff game. The NBA is already having this problem with teams preferring to enter the lottery rather than get beat in the first round. And with the threshold so low to make the playoffs, would teams even need to try too hard to luck into a playoff spot?

In short, this feels like a gimmick that won’t bring in new fans, and will alienate the existing ones.

Baseball may not be dying like some Cassandras have predicted, but there are certainly issues that need to be addressed. Commissioner Manfred should be focused like a laser on issues like:

Enough with changing the playoff structure. The one-game Wild Card has proven to be pretty exciting. And we haven’t even talked about how much this proposal would push post-season games into November. Rob Manfred is acting like the intern who got promoted to an executive position and is trying to impress everyone with his ideas. Just put your head down, Mr. Commissioner, and instead of changing the post-season, make sure a work stoppage doesn’t cancel it.