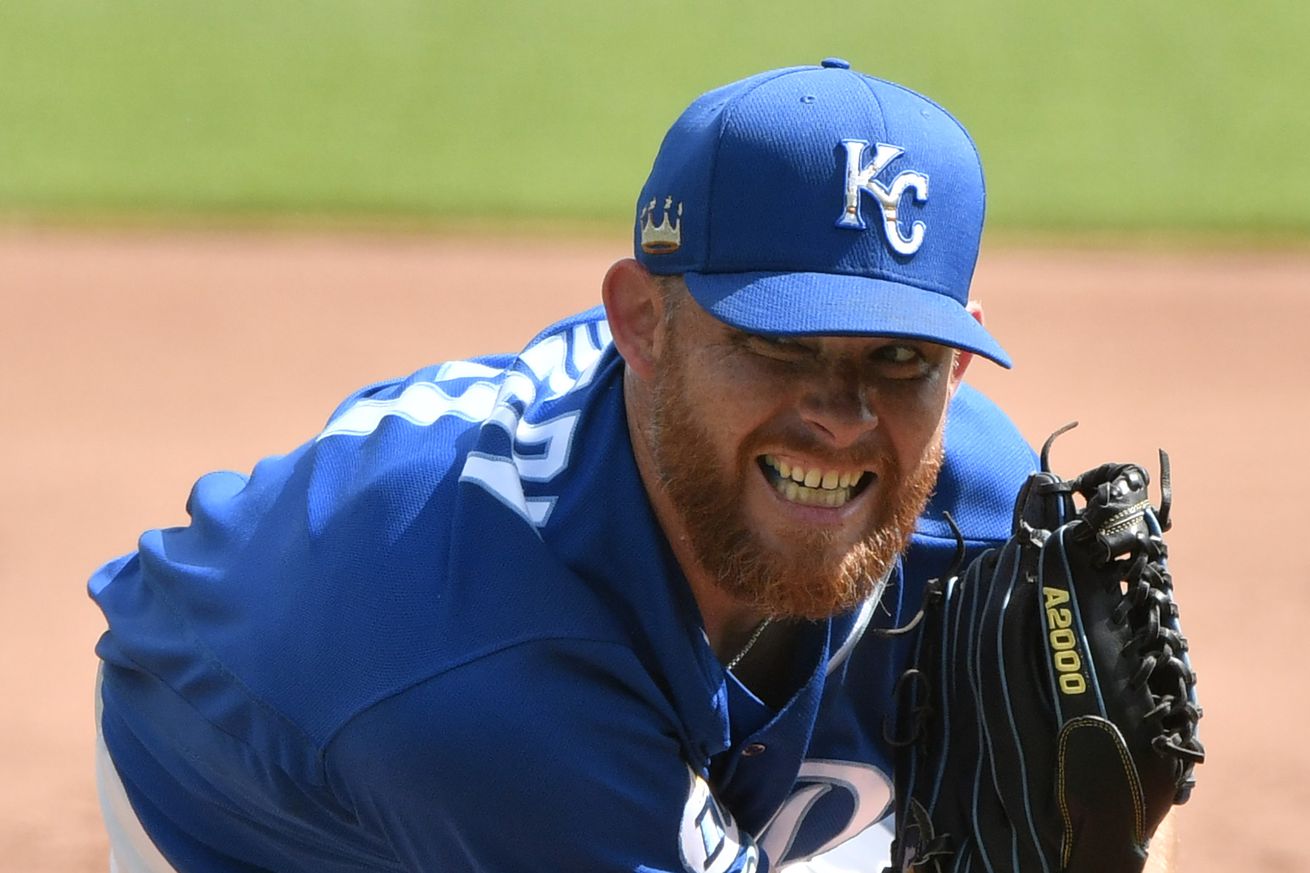 The deal is just about up.

Last week, Ian Kennedy suffered a Grade 2 calf strain that will keep him out at least three weeks and possibly the remainder of the season. This was the last year of Kennedy’s long-term deal, and if this is it for Kennedy in a Royals uniform, he ends his Kansas City career with 163 games – 86 of them starts. He pitched in 546 2⁄3 innings with the Royals with a 4.48 ERA and 4.83 FIP and was worth 6.3 WAR, according to Baseball Reference and 3.9 WAR according to Fangraphs.

Ian Kennedy reached free agency for the first time a week after the Royals won the 2015 World Series. At one time, he had led the league in wins and finished fourth in Cy Young voting, but in the several years leading up to free agency he had regressed to settle in as a solid 1-2 WAR pitcher who was never hurt and could be counted on for 200 solid innings each season. In the year heading into free agency, Kennedy had a 4.28 ERA with 174 strikeouts in 168 1⁄3 innings but was a slightly below replacement level pitcher for the Padres.

The Royals had shown interest in trading for Ian Kennedy before, so it wasn’t a surprise when they were in on him in the winter after the 2015 season. The rotation had not been a strength for the championship club, and they were now without Jason Vargas, who would have to miss most of the 2016 season following Tommy John surgery, and were expected to lose free agent Johnny Cueto. Yordano Ventura and Edinson Volquez were expected to head the rotation, with Chris Young re-signed in December to add to the mix. Danny Duffy, Kris Medlen, Dillon Gee, and Miguel Almonte were starting pitching possibilities, but the Royals wanted something more concrete to make a serious run.

Most expected Ian Kennedy to get a three- or four-year deal. Fangraphs crowdsourced predictions on a deal, and the average was a three-year, $36 million deal. The Royals won Kennedy’s services with a five-year, $70 million deal with an opt-out after the 2017 season. They also had to forfeit the first-round pick in the 2016 draft as a penalty for signing Kennedy.

As Sam Mellinger of the Star put it at the time:

The case for one of the most surprising contracts of baseball’s offseason requires you to value fit over cost.

The Royals are giving a 31-year-old mid-to-back-of-the-rotation pitcher , and we’ll get to how and why they can afford this in a minute, but either way this is a little like paying the surge pricing on Uber because you just really need a ride right now and you don’t want to risk waiting for a cab. it.

The Royals were looking for another ride to the World Series, and they thought overpaying a bit on Ian Kennedy was the best option. Hey, it’s only money, and not even our money.

The five-year Kennedy deal was the longest in club history, but it was also curious since most of the core of the team – Eric Hosmer, Mike Moustakas, Lorenzo Cain, Alcides Escobar – would be eligible for free agency after just two seasons. There are a few possibilities as to what the Royals were thinking about that window and Kennedy’s contract:

I can’t imagine many thought Kennedy was going to opt out after 2017 and leave $49 million in guaranteed money on the table. As for being a bridge, you really had to squint through blue-colored glasses to see a really competitive Royals team post-Hosmer/Moose/Cain/Esky, but Dayton has never been accused of being a realist. Knowing his window was limited, it is quite possible that Moore was focused solely on giving his team the best shot to compete in 2016-2017, and if that meant having an albatross contract in some rebuilding years beyond that, so be it.

In his Royals debut, Kennedy fired 6 2⁄3 innings of shutout ball against the Twins, striking out seven and allowing just five hits. That first year, he was exactly what the Royals wanted, posting a 3.68 ERA in 33 starts. His 4.3 WAR was the 23rd-best by a starting pitcher that year, according to Baseball Reference. Coupled with Danny Duffy, who took a big step forward that year, the Royals had a pair of 4+ WAR starting pitchers.

Unfortunately, the rest of the rotation stunk. Starters other than Kennedy and Duffy combined for a 5.35 ERA, and the Royals posted the fourth-worst starting pitching ERA in the American League overall. Volquez regressed, Ventura stagnated, Young was awful, Medlen was hurt, Gee was a stop gap, and Almonte wasn’t ready (nor was any other Royals prospect). A hot August brought the Royals to within a few games of a Wild Card spot, but they would cool back down in September and finish 81-81.

Kennedy started off well in 2017 as well, posting a 2.30 ERA in five April starts. But he suffered a Grade 1 hamstring strain in early May and had a 6.17 ERA after that, finishing at 5.38 overall, the worst of his career. Kennedy had been a flyball pitcher his entire career, but more of those flyballs were ending up over the fence, and he finished with the second-highest home run rate for anyone with at least 150 innings pitched. The Royals were in contention for the division title through July, and competed for a Wild Card through August, but slumped in September and finished 80-82.

The 2018 season was going to be a rebuild, even if Dayton Moore didn’t want to admit it. Kennedy repeated the performance in 2018, putting up a strong April to suggest his second-half swoon was an aberration. But he followed up six shutout innings in a May 4 start with an ugly nine-run affair in Baltimore. After an eight-run blowup a month later, his ERA stood over six. He suffered an oblique strain in July that would cause him two miss two months, making it the first time since he was in the big leagues for good that he would fail to make 30+ starts in a season. He would finish strong in September, getting his ERA down to 4.66.

Give credit to the Royals for being creative in 2019, and to Kennedy for accepting a new role without any fuss as he transitioned to the bullpen. It turned out Ian Kennedy could become a really terrific reliever! He would save 30 games, post a 3.41 ERA and finish 18th among all relievers in WAR, according to Fangraphs. Kennedy was so good, he even sparked trade rumors, giving hope that the Royals could get some remaining value. But trading Kennedy would have required eating some of his enormous contract, which the Royals were reportedly not willing to do, possibly due to negotiations to sell the team to John Sherman.

The trade window quickly passed as COVID-19 hit, shortening the 2020 season, and Ian Kennedy quickly regressed, giving up 14 runs and seven home runs in 14 relief innings before hitting the Injured List with a calf strain.

In all, Ian Kennedy has been a perfectly fine pitcher in Kansas City with a very uneven performance. Out of 80 pitchers that have thrown at least 500 innings since 2016, Kennedy ranks 56th in ERA+ at 99.

The deal did give the Royals a greater shot to compete in 2016, but the fickle nature of pitchers and the looming talent cliff in 2018 meant that would be the only year the deal would really be worth it. Kennedy was just replacement level in 2017, and if he had performed better, the Royals may have actually made the post-season instead of finishing five games out of a playoff spot.

The Kennedy deal began to look like an albatross by 2018, but by then it didn’t really matter. The team was going to be terrible in 2018-2020 despite Kennedy’s deal due to poor drafts. Signing Kennedy perhaps kept the Royals from retaining a core player like Moustakas, Hosmer, or Cain, but it is not likely those players would have moved the needle much the last three seasons.

Where the Kennedy signing likely hurt the most was in the draft pick given up. The Royals would have had the 27th pick in the 2016 draft (22nd once forfeited picks for free agent compensation were determined). Perhaps the Royals miss on that pick anyway, but among the next ten picks were infielder Carter Kieboom, pitcher Dane Dunning, and catcher Will Smith. If the Royals really wanted to win now while leaving the door open to compete down the road – like they seemed to want to do following the trades of Wade Davis for Jorge Soler and Jarrod Dyson for Nate Karns – then giving away a draft pick really undermined that strategy.

What can we learn from the Ian Kennedy signing? The deal, coupled with the Alex Gordon signing, are data points that signing 30+ year old free agents to multi-year deals is a risky proposition. Sacrificing draft picks also seems like something to avoid, although that is not as much of an issue under the new draft pick compensation system. Finally, players should be moved while there is a window of an opportunity, particularly older players and relievers who could regress quickly. Rebuilding teams need to be willing to eat money to acquire prospects if necessary.

Ian Kennedy wasn’t a terrible player in Kansas City by any stretch, putting up two very good years, mixed with three mediocre seasons marred by injury. But the Royals overpaid for his services, gave up a much-needed draft pick, and failed to move him when they had the opportunity. You can’t fault the Royals for wanting to keep their window of contention open and maximizing their odds, and ultimately the deal may not have many long-term ramifications, but it is still a contract a lot of Royals fans would probably like to forget.