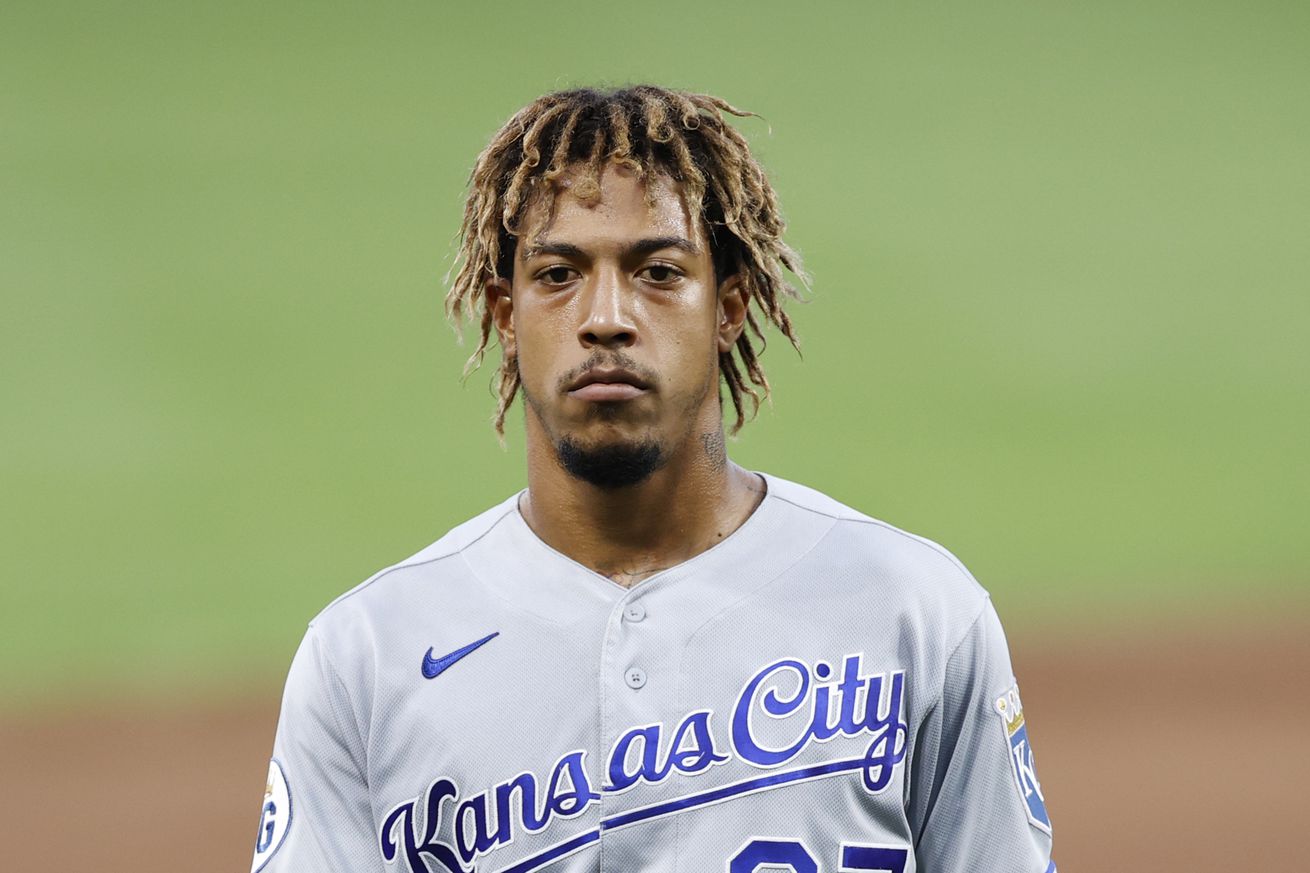 Adalberto Mondesi #27 of the Kansas City Royals looks on during a game against the Cincinnati Reds at Great American Ball Park on August 11, 2020 in Cincinnati, Ohio. The Reds won 6-5 in ten innings. | Photo by Joe Robbins/Getty Images

He has struggled very much this season

Kansas City Royals fans have seen a lot of great baseball in the last decade. We’ve seen great team feats, culminating in a World Series victory. And we’ve also seen great individual feats—unbelievable defense from Lorenzo Cain, hot streaks at the plate from Eric Hosmer where he resembled a Hall of Fame hitter, stunning outfield assists from Alex Gordon, and Jorge Soler bombs to the moon.

And yet, peak Adalberto Mondesi might just be more exciting than any of those players. His power and speed combination is truly rare, and we’ve seen athletic feats from him that are simply jaw dropping. This is to say nothing of his gutsy and determined base stealing and baserunning excellence. These two videos are evidence of his immense talent.

This first video shows Mondesi swiping second base with an absurd max sprint speed of 30.3 feet per second:

This second video shows Mondesi absolutely destroying a pitch to straightaway center field that would be a home run anywhere.

But here we are, five years into Mondesi’s big league career, and we’re still talking about Mondesi’s potential. Throughout his career, Mondesi has shown glimpses of that potential. Star potential, as they say. And while Mondesi certainly struggled the first few years of his big league career, we’re seeing some of the worst of his entire career this year. He is not on the strugglebus. He is not driving the strugglebus. At this point, he’s not even on a strugglebus; Mondesi is currently Admiral of the Struggle Fleet.

But we gotta start somewhere, so let’s start here: Mondesi has been awful with runners in scoring position. Truly awful.

How about recent games? Over his last 15 games, comprising 53 plate appearances—not including yesterday’s game—Mondesi is hitting .176/.208/.216. He has struck out 16 times to only one walk. On the year, per wRC+, Mondesi is hitting 53% below league average, which is somehow even worse than Alcides Escobar’s infamous 2013 season where he hit 51% below league average.

Mondesi’s struggles are currently extending to what he normally excels at, which is defense and baserunning. Before this season, Mondesi’s stolen base success rate was 84%. This year, it is 60%, and he has been thrown out four times already. On the field, Mondesi has made four errors already, and is rated negatively by both UZR and DRS.

It is clear to everyone watching that Mondesi is in over his head. This is, of course, disappointing. Mondesi spent the last two years as a productive player with elite baserunning and defense and perfectly acceptable offense, but is not appreciably better this year than he was in his rookie season in 2016. Mondesi is pressing. He is better than this, but he is so far deep that he can’t dig himself out.

However, I think there is a deeper problem here, which is that Mondesi’s talent has been hyped past realism and into the unnobtainable. Just last week, Bleacher Report posted an in-depth dive into Mondesi that featured MLB players who sung Mondesi’s praises.

“Francisco Lindor with some speed,” Merrifield says. “I think Lindor at a younger age had a better grasp on a consistent approach. But I think Mondi’s tools are as good if not better than Lindor’s.

“He’s faster than Lindor, and he can probably hit the ball further. I mean, Lindor is one of the best defensive shortstops in the American League, but Mondi’s right there with him. I think that’s a good comparison.”

Pedro Grifol, the Kansas City bench coach who is so close with Mondesi as to have become a father figure of sorts during these past few years, is even more emphatic.

“They both run,” Grifol says of the Mondesi-Lindor comparison. “They both steal bases. One thing Mondi was doing was playing Gold Glove defense last year. They both have power. Mondesi is capable of hitting 25-30 home runs.

Francisco Lindor is one of the best shortstops in baseball. Comparing Mondesi to Lindor is certainly a good look for Mondesi. Saying that Mondesi has better tools than Lindor, well, that does nothing except put pressure on Mondesi.

But it’s past time we lowered our expectations for Mondesi for one truly simple reason: Mondesi can’t hit.

It is the band-aid that no one wants to rip off, but it’s the stark, damn truth. There are 301 players with at least 1000 plate appearances since 2016. No one has swung and missed at pitches a higher percentage of time than Mondesi.

Mondesi has also shown to have the worst command of the strike zone among any big leaguer over that same time period. Mondesi has the seventh-lowest walk rate among those 301 players and pairs it with a high strikeout rate. The result? A strikeout-to-walk ratio of over 7.5.

These are not figures over just a few weeks’ time. Mondesi has 1042 career plate appearances. This is who he is: a guy who doesn’t take a walk and can’t make contact with the ball. It is a dangerous, nasty combination made worse by Mondesi’s propensity for hitting ground balls, which eclipsed 50% this year and is 45% for his career.

I do not want to take away from Mondesi’s athleticism, which is absolutely elite. But baseball has a way of neutralizing elite athleticism like no other sport. You cannot steal a base unless you get on base first. You cannot properly utilize your strength if you do not hit fly balls. And you simply cannot create value if you do not make contact in the first place.

Mondesi probably should be benched. Working through problems only works if the continuous failure doesn’t manifest itself psychologically. But there is a deeper issue at play, which is that everyone is expecting Mondesi to be a star when his game is so fundamentally flawed that his route to stardom is essentially nonexistent.

In other words, for Mondesi to be a star, he needs to exhibit skills he never has in his professional baseball career, skills that cannot be helped by his athleticism or a determined work ethic. Mondesi needs to not be a little better, but hugely better, at nearly every level of hitting competency. It is simply unfair to still expect or demand stardom from Mondesi at this point. That, ironically, may be the only thing to unlocking his true potential.

And if Mondesi does become a star? Fantastic—everyone loves an underdog.