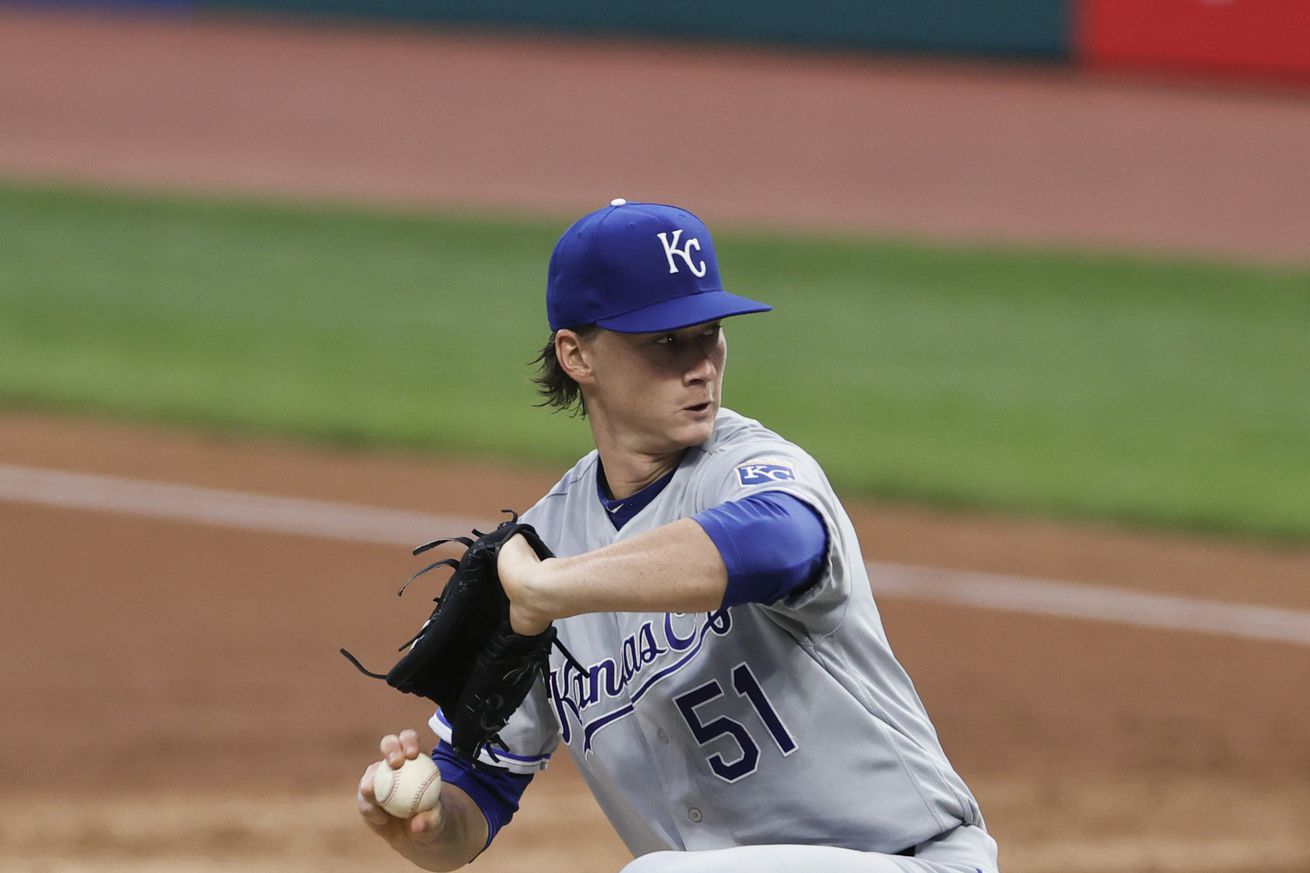 Hint: None of them are, “Brady Singer was drafted by the Royals”

It’s been almost exactly two years since Jorge López thrilled baseball fans around Kansas City by almost throwing a no-hitter in his fifth start as a Royal after Kansas City acquired him along with Brett Phillips for Mike Moustakas. Now Brady Singer has done the same thing. But I’m here to tell you that Brady Singer did it better in almost every way. He walked one more than López and he took more than five starts as a Royal to do it, but there were six things I noticed that make Brady Singer’s bid more impressive than López’s.

One well-known baseball truism is, “You can’t hit a home run on a groundball.” Not only can you not hit a home run, but as batters have been discovering in the era of the shift, it’s a lot harder to get a any kind of hit. Pitchers who get lots of groundballs have more consistent success than those who don’t. Dayton Moore can preach about flyball pitchers in Kauffman stadium but the team still has to play half of their games in other parks which won’t always offer the same leniency to flyball pitchers.

Brady Singer naturally gets more groundballs than López as a general rule but on their respective big nights Jorge managed only 38.1% groundballs – even fewer than normal – but survived his experience. Brady Singer, on the other hand, got Cleveland to hit 52.9% of their balls in play on the ground. Which is, oddly enough, the exact percentage he’s carried on the season.

Brady Singer had to pitch against the 26-18 Cleveland Indians. Jorge López had the privilege of pitching against the 64-77 Twins. You don’t get to choose your opponent; Singer would almost certainly not have chosen to face the Twins three times in a row, after all. Still, you’ve got to give style points to the guy who can hold down the better team.

Much like the first point, a pitcher who does better at keeping the opponents’ exit velocity down is using less luck to earn his outs. In López’s start he gave up seven hard-hit balls and ended with an average exit velocity against of 87.8 MPH. Brady Singer, on the other hand, allowed only four hard hit balls and a average exit velocity of 84.2 MPH. To get an idea what that means, that’s the difference between this year’s versions of José Ramirez and Daniel Murphy. I don’t know about you, but I know which one of those guys I’d rather pitch to.

We all know why strikeouts are good, right? López struck out four; Brady Singer struck out eight. That’s twice as many. That means Singer was twice as good!

Like point number three, this has some correlation with an earlier stat. It’s a lot easier to get strikeouts when you’re getting whiffs. Brady Singer got a lot more swings-and-misses than Jorge López. Singer got 18 whiffs in 57 swings for a 32% whiff rate. López only managed 6 whiffs in 42 swings for a 14% whiff rate. If you add in the called strikes Brady Swings got a strike on his batter in 34% of his pitches without them making any contact at all. Jorge López could only accomplish a similar feat 29% of the time.

Singer’s stuff was filthier and it was in the zone more often. That means he’s relying more on his skill and less on his luck. That, as you may have deduced for yourself, is a common denominator between most of these stats. Brady Singer didn’t demand nearly as much from his defense in his quest for a no-hitter. That makes him the better pitcher both on that night and, because these things all trend toward true even across their careers, it makes Singer a better pitcher in general.

Jorge López was 25 years old when he pitched his game against Minnesota. He wasn’t old, but he was definitely supposed to be at the beginning of the prime of his career. Brady Singer, on the other hand, is still only 23. That means that there is a very good chance he’s only going to get better from here. Perhaps significantly so. By the time Singer is 25 he will have already pitched a near-no-hitter. That’s a success he can build on in the same part of his career that López spent trying to stick to a roster.

No matter how you slice it, Singer’s start was more impressive and bodes even better for the Royals’ future. If you compare their season stats, among other things, López had a 6.35 ERA and Brady Singer now has an almost respectable 4.66 ERA. Along with being younger, the Royals didn’t have to use two years of team control on Singer while they were busy losing 100+ games in 2018 and 2019. Which means he’s more likely to be on the next competitive Royals team, too.

I wish I could guarantee that all of this meant that Brady Singer would definitely pitch a no-hitter some day or that the Royals will definitely become a competitive ball club again in the near future. Alas, I can guarantee nothing except that pitching prospects will always break your heart.