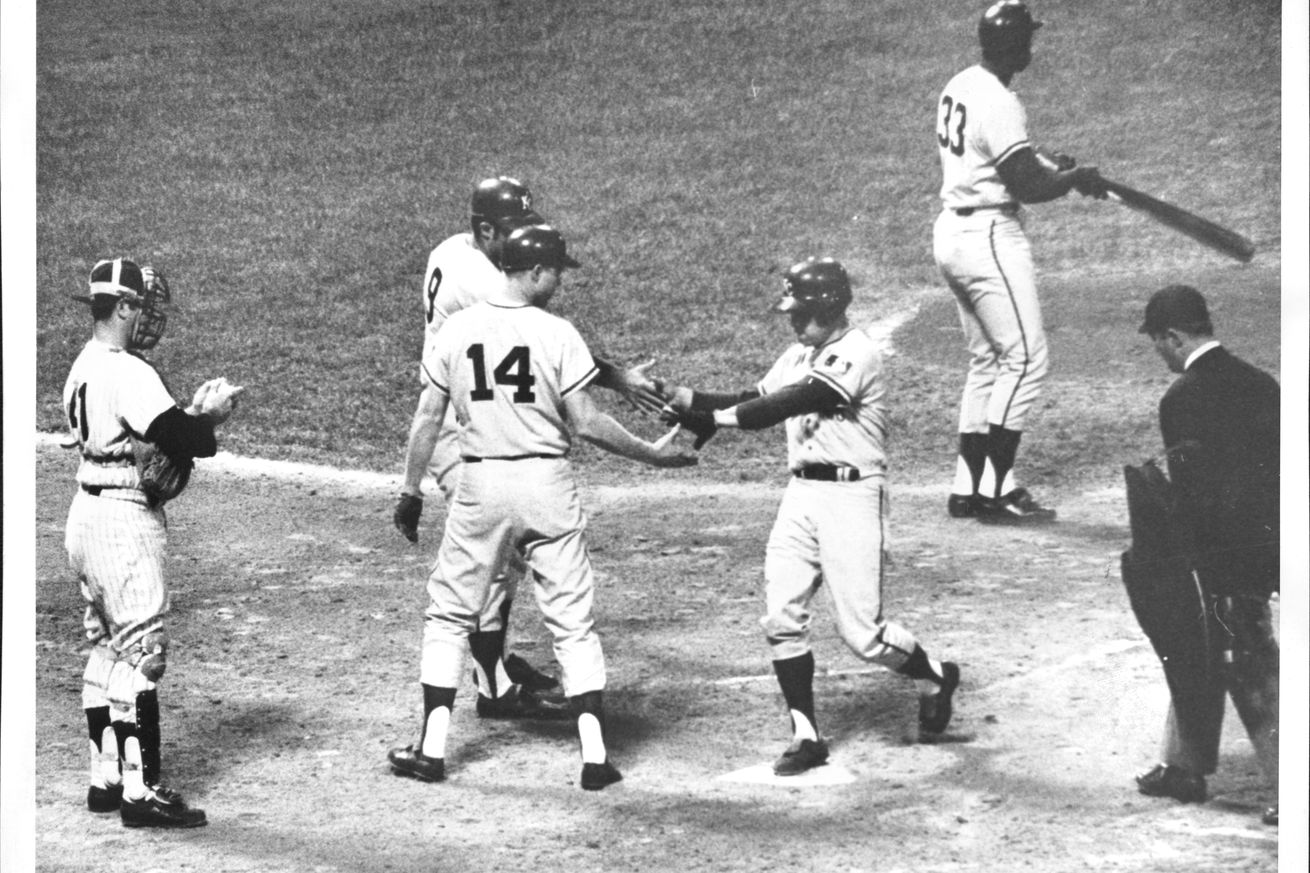 The Jerry Adair story is one rooted in tragedy. It didn’t start that way. Adair was born and raised in Sand Springs, Oklahoma. After graduating from Sapulpa High School, he played college baseball and basketball at Oklahoma State under legendary coach Hank Iba. He also played one year of baseball in a work/play program for the McPherson (KS) BJ’s in the Ban Johnson League. Adair helped lead the BJ’s to the Ban Johnson tournament finals that year.

The Baltimore Orioles liked what they saw and signed Adair to a free agent contract in September of 1958 for $40,000. He saw immediate action with the big-league club, coming in as a defensive replacement in the eighth inning of a game against the Washington Senators that very day. He got his first big league at bat a couple days later, on September 5, but had to wait until September 21 to collect his first hit. The hits were few and far between in that early stint (2 for 19 for a .105 average).

Adair spent the bulk of the 1959 season at the Orioles AA affiliate in Amarillo, Texas where he hit a robust .309. That earned him another cup of coffee with the Orioles, a 12-game stint at the end of the season in which he hit a respectable .314.

Adair bumped up a level in 1960 to Baltimore’s AAA team, the Miami Marlins. He once again posted good numbers, but only got three games with the big club at the tail end of the 1960 season.

He made the Orioles out of spring training in 1961 and appeared in 133 games, hitting .264. Adair, nicknamed “Casper the friendly ghost”, was a mainstay in the Orioles lineup from 1961 through the end of the 1965 season, averaging 139 games a season while playing third, second and short. He set a then major league record in 1964 with the highest single-season fielding percentage (.994) by a second baseman. Between the 1964 and 1965 seasons he also set records for consecutive error less games by a second baseman with 89, and consecutive chances without an error, with 458. He even finished 17th in the 1965 MVP vote as he set career highs in games played, at bats and RBI.

Seventeen games into the 1966 season, the Orioles traded the Ghost to the Chicago White Sox for pitcher Eddie Fisher, another Oklahoman. In June of 1967, the Boston Red Sox, sensing an open window to a pennant, acquired Adair from the South Siders for a minor leaguer and aging pitcher Don McMahon. McMahon had signed with the Boston Braves in 1950 but didn’t make his major league debut until 1957 as a late blooming 27-year-old. Like the energizer bunny, once he made the big time, he just would not quit. He was 37 when the White Sox got him and continued to pitch until he was 44, wrapping up an improbable 18-year career. He appeared in 874 career games, which was fourth all-time when he retired after the 1974 season.

Adair was just what the doctor ordered for the Red Sox. He appeared in 89 games, splitting time at shortstop, second and third base and in addition to playing stellar defense, he hit a career best .291 to help the Sox hold off the Tigers during their Impossible Dream season. Carl “Bleeping” Yastrzemski called Adair “one of the coolest clutch hitters I’ve seen.” Adair capped off the year by finishing 15th in the MVP vote.

Adair appeared in 74 games for the BoSox in 1968, but his hitting cooled off to a pedestrian .216. The Sox left him unprotected in the expansion draft and Kansas City nabbed him with their 26th selection, pick number 51 overall.

Adair was in the starting lineup for the Royals first game ever, batting second and playing second. He finished the day with two hits in five at bats and his first inning single drove home Lou Piniella for the first run in Royals history.

Adair played well that first season. He was 32 and up to that point had been a career .256 hitter. Adair appeared in 126 games for the expansion Royals and slashed .250/.285/.310. He finished with the fifth-most hits and fourth-most RBI on the offensively challenged team.

Adair missed most of spring training in 1970, electing to spend time with his young daughter, who was battling cancer, which eventually proved fatal. The team was about to board a plane on May 5, for a game in Baltimore, when Adair was abruptly released. The move was seen as cold-hearted at the time, given Adair’s personal situation. General Manager Cedric Tallis defended the decision by saying “we just felt he couldn’t help the club.”

Adair did hook on with St. Louis, which assigned him to the Tulsa Drillers, their AAA team. Adair hit .299 in 33 games, but never made it back to the big leagues.

Unable to find a suitor for the 1971 season, Adair signed with the Hankyu Braves of the Japanese league where he hit .300 over 90 games. He retired at the end of the season at the age of 34.

Adair immediately went into coaching with stints in Oakland (1972-74) and California (1975). Over his career, Adair was considered by baseball people to be a “gamer”, a guy who would give you everything and would play through injuries. Tragically, Adair would die young, succumbing to liver cancer on May 31, 1987 at the age of 50. Adair is buried in his hometown of Sand Springs, Oklahoma.

I always had a soft spot in my favorite player heart for Mike Hedlund. I think it was because he looked like my people. The Lees you see, have had their fair share of red hair and freckles, two things Hedlund had in spades. In fact, Hedlund’s nickname was Red. I always thought Hedlund was a doppelganger for my uncle Alan and had he attended a Lee family reunion, he could easily pass for one of us.

Hedlund hailed from Arlington, Texas and was signed by the Cleveland Indians after his high school graduation in 1964. Since Hedlund was classified as a Bonus Baby, he had to spend a year on the Tribe’s roster. After spending what remained of the 1964 season at Class A Burlington, Hedlund was added to Cleveland’s 1965 roster. He made his Major League debut on May 8, 1965 in a game against Boston at Fenway. He made a short relief appearance getting the first batter he faced, Carl “Bleeping” Yastrzemski, on a grounder to first and Eddie Bressoud on a fly ball to center. He made five more appearances that summer, the final two coming against the Kansas City Athletics, the last of which in a game at Municipal on June 27 was his longest appearance at two innings. For an 18-year-old, he held his own, throwing 5 1⁄3 innings while only allowing 6 hits and 3 runs. He struck out four batters.

Hedlund rightfully spent most of the next three seasons honing his craft in the minors. He made his next major league appearance on September 1, 1968 against the Yankees. The Indians left him exposed in the expansion draft and the Royals selected Hedlund with their 23rd pick, the 45th overall.

Hedlund made the Royals roster out of spring training and spent the 1969 season primarily as a swing man. He appeared in 34 games, making 16 starts over 125 innings of work. He posted a very respectable 3.24 ERA. Hedlund’s best game of the ’69 season came on September 18 when he pitched the Royals to a complete game, seven hit, eight strikeout victory against the powerful Oakland A’s.

The Royals sent him to Venezuela that winter and Hedlund was spectacular, setting a league record by throwing 53 scoreless innings. He finished the winter season with a microscopic .75 ERA. Unfortunately, Hedlund also contracted the Hong Kong flu, which caused him to lose 30 pounds off his already thin frame. It’s ironic that as I write this, most of the world is dealing with the Coronavirus pandemic. The Hong Kong flu pandemic killed an estimated one to four million people worldwide.

Hedlund survived but the virus wreaked havoc on his 1970 season. He made just nine appearances for the Royals between April 20th and May 18, but was ineffective, giving up 13 runs in just 15 innings of work. Hedlund spent the remainder of the season in Omaha, working to regain his strength.

He won a spot in the Royals starting rotation with a strong spring training in 1971 and enjoyed a career year, finishing at 15-8 with a 2.71 ERA, which was fourth-best in the American League.

Hedlund’s best game came early in the season when on April 24, he tossed a complete game, three hit shutout against his former team. The Royals went 20-12 in games that Hedlund started in 1971.

Unfortunately, Hedlund never got on track in 1972. Manager Bob Lemon moved Hedlund back to the swingman role, where he appeared in 29 games, making 16 starts. The Royals lost five games that Hedlund started by one run. His best appearance came on August 5 when he tossed a complete game five-hitter against the Angels in a 2-1 Royals victory. At that point his ERA stood at a respectable 3.68.

Then for some reason the wheels fell off. Hedlund allowed 26 runs over his next 25 innings of work. He only gave up two long balls during the stretch and only nine walks, but opposing teams raked him for a .355 average over those eight games. That ugly stretch of games was enough to bump his season ERA to 4.78 and signal the end of the Hedlund era in Kansas City.

In November, the Royals traded Red back to the Indians for his former teammate and future Thatherton Fuels star, Dirty Kurt Bevacqua. Bevacqua quickly became a fan (and author) favorite with his balls to the wall style of play.

Hedlund did not make the Indians rotation out of spring training and spent the entire 1973 season playing for their AAA affiliate in Oklahoma City where he went 7 and 8 with a 4.44 ERA. The sudden drop off in performance always makes me wonder if Hedlund had injured his arm in the 1972 season.

In March of 1974, the Indians traded Hedlund to the Chicago White Sox for outfielder Ken Hottman. Once again, Hedlund failed to make the big-league roster and spent the summer of 1974 in Des Moines, Iowa playing for the AAA Iowa Oaks. He appeared in 31 games, posting a 5 and 8 mark with a 4.80 ERA over 152 innings. In December of 1974, the White Sox shipped him to the Cincinnati Reds in exchange for a pitcher named Dan “Ozzie” Osborn. Hedlund never played another game at any level, done at the age of 27.