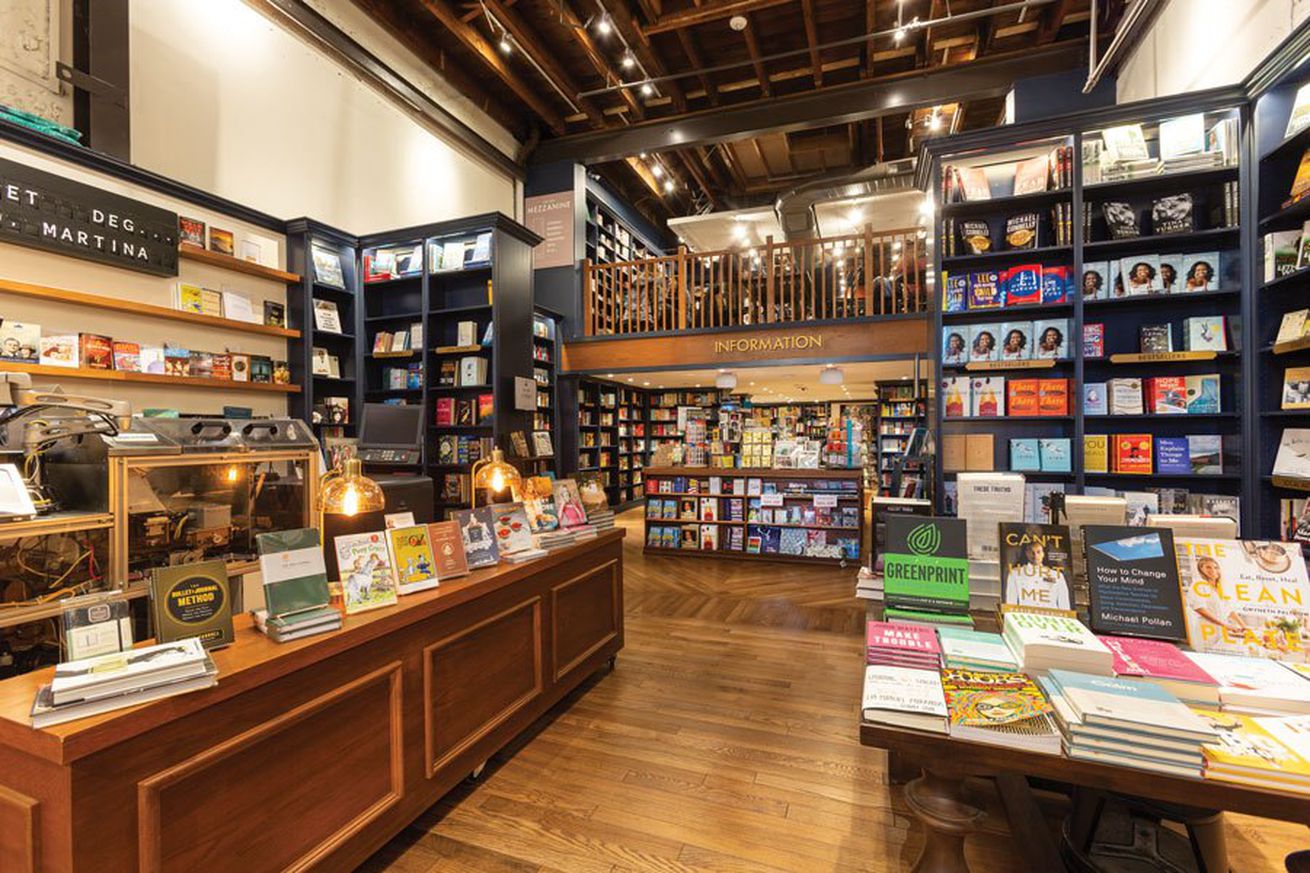 Great books and a great cause

With many of us stuck working from home, many others suddenly jobless or with reduced hours, and with all of us unable to go anywhere externally for entertainment, we’re all basically shut-ins for the moment. The absence of sports means that we can’t even watch random basketball or baseball games (or something even weirder, like literally anything in the Olympics).

As a result, we’ve turned towards our screens for entertainment. Netflix and Disney Plus are booming. Video game sales are strong. But even though it’s 2020 and screens are the omnipresence in our lives, books still exist, and are still great ways to entertain yourselves. And while you could read books on a screen like a phone or iPad (preferably an e-reader of some sort if you don’t want your eyes to fall out), there’s something special about physical books.

Rainy Day Books, located in Fairway just a few minutes away from Joe’s Kansas City’s original location and the Country Club Plaza, is the Kansas City area’s preeminent independent bookseller. Staffed with friendly, knowledgeable workers—voracious readers who can recommend a great book for any taste—the bookstore is famous for their author events that bring famous writers and figures to the area.

There’s only one problem, as you can probably guess. Rainy Day Books is closed due to the coronavirus, and while they’re busy fulfilling online orders, their sales have taken a nosedive. It’s gotten bad enough that they’ve started a Go Fund Me to help keep them afloat through summer.

Below are five baseball books that Kansas City baseball fans simply need to read. They’re great entertainment and informative in their own ways. You can purchase all of them online through the Rainy Day Books website. And for our readers who don’t live in the Kansas City area, I welcome you to find your area’s own independent bookseller and ordering through them if you’re able.

The cover says: Moneyball reveals a quest for something as elusive as the Holy Grail, something that money apparently can’t buy: the secret of success in baseball. The logical places to look would be the giant offices of Major League teams and the dugouts. But the real jackpot is a cache of numbers collected over the years by a strange brotherhood of amateur baseball enthusiasts: software engineers, statisticians, Wall Street analysts, lawyers, and physics professors.

In a narrative full of fabulous characters and brilliant excursions into the unexpected, Lewis shows us how and why the new baseball knowledge works. He also sets up a sly and hilarious morality tale: Big Money, like Goliath, is always supposed to win…. How can we not cheer for David?

Matt says: Moneyball is truly one of the most important and fascinating nonfiction books in recent memory. One could easily argue that its existence kicked off a revolution that overturned how a multi-billion dollar industry and American cultural touchstone operated.

The cover says: This New York Times bestseller examines major league baseball’s next cutting-edge revolution: the high-tech quest to build better players. As bestselling authors Ben Lindbergh and Travis Sawchik reveal in The MVP Machine, the Moneyball era is over. Fifteen years after Michael Lewis brought the Oakland Athletics’ groundbreaking team-building strategies to light, every front office takes a data-driven approach to evaluating players, and the league’s smarter teams no longer have a huge advantage in valuing past performance.

Instead of out-drafting, out-signing, and out-trading their rivals, baseball’s best minds have turned to out-developing opponents, gaining greater edges than ever by perfecting prospects and eking extra runs out of older athletes who were once written off. Lindbergh and Sawchik take us inside the transformation of former fringe hitters into home-run kings, show how washed-up pitchers have emerged as aces, and document how coaching and scouting are being turned upside down. The MVP Machine charts the future of a sport and offers a lesson that goes beyond baseball: Success stems not from focusing on finished products, but from making the most of untapped potential.

Matt says: The next generation of Moneyball, The MVP Machine has all sorts of fascinating insights. Younger fans who either weren’t alive or weren’t old enough to experience the turn-of-the-millennium baseball setting of Moneyball will appreciate the more recent player references. The Royals make more than one appearance in this book, as well.

The Soul of Baseball

The cover says: When legendary Negro League player Buck O’Neil asked Joe Posnanski how he fell in love with baseball, the renowned sports columnist was inspired by the question. He decided to spend the 2005 baseball season touring the country with the ninety-four-year-old O’Neil in hopes of rediscovering the love that first drew them to the game.

The Soul of Baseball is as much the story of Buck O’Neil as it is the story of baseball. Driven by a relentless optimism and his two great passions—for America’s pastime and for jazz, America’s music—O’Neil played solely for love. In an era when greedy, steroid-enhanced athletes have come to characterize professional ball, Posnanski offers a salve for the damaged spirit: the uplifting life lessons of a truly extraordinary man who never missed an opportunity to enjoy and love life.

Matt says: Joe Posnanski worked at the Kansas City Star for years, a treat for those of us who got to read his pontifications and reports about the Royals and Chiefs. Pos remains one of the best sportswriters out there, and while I haven’t read this book yet, it’s about one of the most important figures in Kansas City and baseball history by a truly great writer. What’s not to love?

More Than a Season

The cover says: When Dayton Moore arrived in Kansas City in 2006, the Royals hardly resembled a contender. The general manager inherited a major league club that had just one winning season in the previous decade. Moore, a Kansas native who grew up as a Royals fan, implemented a plan to return the franchise to its glory years. Though not without a few bumps in the road, that plan came to fruition in 2014 and 2015, as the Royals reached the World Series both years and were corned 2015 World Series champions. In More Than a Season, Moore shares how his faith and leadership principles guided his rebooting of the Royals. The general manager describes how he built one of baseball’s best farm systems and international scouting departments of out nothing. He shares insight on how he persevered through six consecutive losing seasons and the critical response to controversial trades of Zack Greinke and Wil Myers—transactions that ultimately yielded the foundation of a champion. Full of never-before-told stories from inside the Royals organization More Than a Season features an introduction by William F. High, CEO of the National Christian Foundation Heartland.

Matt says: While I will forever hold a grudge against Dayton for not going all the way and calling it “Moore than a Season,” More Than a Season is jam-packed with unique points of view, insider information about how the 2014-2015 teams were assembled, and stories about your favorite players like Lorenzo Cain, Eric Hosmer, and Mike Moustakas. It’s a must-read for fans eager for more information on how their team operates.

The cover says: Every year, Major League Baseball spends more than $1.5 billion on pitchers—five times more than the salary of every NFL quarterback combined. Pitchers are the game’s lifeblood. Their import is exceeded only by their fragility. One tiny band of tissue in the elbow, the ulnar collateral ligament, is snapping at unprecedented rates, leaving current big league players vulnerable and the coming generation of baseball-playing children dreading the three scariest words in the sport: Tommy John surgery.

Jeff Passan traveled the world for three years to explore in-depth the past, present, and future of the arm, and how its evolution left baseball struggling to wrangle its Tommy John surgery epidemic. He examined what compelled the Chicago Cubs to spend $155 million on one arm. He snagged a rare interview with Sandy Koufax, whose career was cut short by injury at thirty, and visited Japan to understand how another baseball-mad country treats its prized arms. And he followed two major league pitchers, Daniel Hudson and Todd Coffey, throughout their returns from Tommy John surgery. He exposes how the baseball establishment long ignored the rise in arm injuries and reveals how misplaced incentives across the sport stifle potential changes.

Matt says: Jeff Passan is a Kansas City-based national baseball writer who explores a fascinating subject. As they say, There Is No Such Thing As A Pitching Prospect (TINSTAAP), and that’s because pitching is both an elusive art form and science. Passan’s a good writer, and while I haven’t read this book personally either, I’ve heard great things about it.