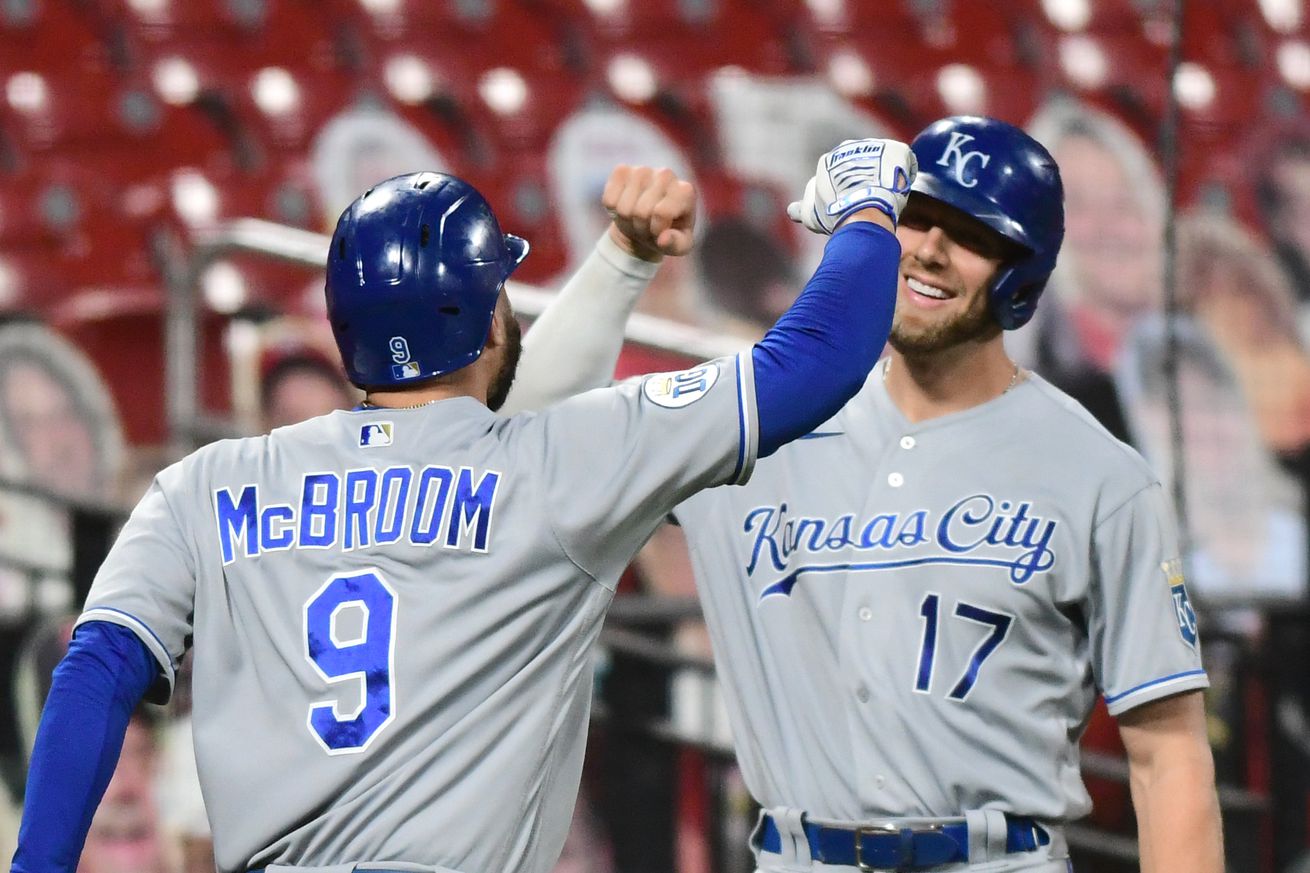 Here are the in-house candidates for the future at first base.

To me, this shortened season has had one primary goal: seeing who was going to be part of the future contention window and where they fit exactly. And a lot of that goal has been achieved. We learned that Brett Phillips wasn’t going to be part of it. We’ve learned that Brad Keller is legit and will be part of the rotation moving forward (extension anyone?). A few different relievers have stepped forward to make a case for roles at the back of the bullpen. We’ve found out that Brady Singer and Kris Bubic are good enough to pitch to major league hitters right now, giving hope that Lynch, Kowar, and maybe even Asa Lacy, aren’t far behind. We’ve learned that Salvy still seems capable of producing at the plate after missing an entire season and Whit sure seems to be defying us all by continually to get even better with age.

The main question for me with regard to where this team is heading is at “the other hot corner”. Since the Royals missed out on being the team to pay Eric Hosmer a massive contract, the Royals have seemed to flounder on what to do there. Since Hosmer’s departure two seasons ago, the Royals have had nine different players take at-bats as a first baseman and they’re still no closer to figuring out the future there.

The first baseman is extremely important to the offensive success of a baseball team (Thanks Capt. Obvious). Since 2018, the Royals have the fourth-lowest team OPS in the majors behind the usual suspects (Marlins, Tigers, and Giants). The Royals offense has been…for lack of a better word…hot doodoo butter over the last two seasons. So I wanted to lay all the cards out on the table to assess the current in-house candidates for the Royals’ first baseman of the future.

Pratto was drafted out of high school in 2017 to be THE guy. In the first season and a half between rookie and A ball, it looked like the pick would work out in that he hit to the tune of a .774 OPS while playing solid defense. Then the 2019 season happened. Pratto was assigned to the High-A affiliate in Wilmington and it was a season to forget. The 20 year old slashed .191/.278/.310 while striking out in 34.7% of his plate appearances. He was still walking at a decent rate and playing solid defense, so his prospect pedigree didn’t tank completely. In the offseason, Pratto got some extra hitting development in with Royals hitting guru team, outlined in another great piece from Alec Lewis at The Athletic.

Since then, there’s been plenty of reports that Pratto has taken some steps forward working at the alternate site in 2020. He’s not even 22 yet and it seems like his entire tenure in the Royals’ system he’s been comped to Hosmer. Hosmer also struggled in his first taste of High-A ball, but was able to reset and move through the system at the rate everyone expected. There’s still plenty of time for Pratto to come along and if he were able to move along like Hosmer, we could be seeing him in Kauffman by 2022, and the way he profiles combined with the lack of a better option makes me think that he won’t even have to be a good hitter to do so. And thinking about that is a bit disheartening considering how much slack the rest of the future offenses will have to pick up in order to be where it will need to be.

Hunter Dozier has certainly become one of the Royals best hitters over the last two seasons and, if we’re being honest here, he’s the only in-house candidate that I’d sign up for long term when it comes to offensive production. Last year it seemed like he turned a corner that he’s, more or less, legitimized so far in 2020 and he might actually be better than last season. In the last two seasons, he’s posted a nice .873 OPS and 126 wRC+. All while playing multiple positions.

The problem is that he’s a below-average defender at first base. In 537.2 professional innings at first base, Dozier has produces -4 defensive runs saved and a -0.6 UZR/150. There’s also the issue of how long term are the Royals willing to commit to him? He just turned 29 years old. If the Royals contention window is supposed to start in 2022 like some believe, he’ll be 31 years old and in his second year of arbitration. He’ll be eligible for free agency in 2024 at the ripe old age of 31.

Dozier has a similar career arc to Whit Merrifield and I could definitely see the Royals talking a Whit type of extension with Dozier where he makes a bit more money now while delaying his free agency by a year or two. If that were to happen, I’d want it to be front-loaded to match his likely production, as well as, maintaining payroll flexibility when that starting pitcher wave starts getting expensive beyond 2024. And I have faith that his bat will maintain that value, but I really don’t think that his glove will be where the Royals want it to be for a first baseman.

Ol’ Bro-Hearn can do some exciting things at the plate. He was certainly a feel good story back in 2018 when he put up 23 dongs and a .950 OPS in 44 games seemingly out of nowhere. Water always finds its level as they say, and it did in 2019 when he slashed .195/.281/.369 in 105 games. In his defense during that time, he was fighting some injuries and that will always hamper a player’s ability to live up to expectations, even if they were unsustainable from Jump Street. During this season he hasn’t been much better though, only managing a .221/.313/.349 line in his age 27 season.

He did get off to a slow start due to testing positive for COVID and I don’t know that anyone is going to use this season’s sample sizes for productive reasons, but you’d certainly have liked to have seen more from him at this point. I reserve the right to change my mind if he has an age 28 Hunter Dozier type of turn around, but O’Hearn is in his theoretical prime and I haven’t seen enough from him to say definitively that “He’s the guy”.

The curious case for Ryan McBroom. He’s had quite a year at the plate in 2020, mostly in his clutchiness in pinch hit situations. In those 13 pinch hit opportunities in 2020, he’s carrying a hefty 1.505 OPS. I mean what does a fella gotta do to get in an everyday lineup? Well for starters he needs to stop striking out so damn much. This season he has a K rate of 33.8%, second among Royals hitters with at least 50 plate appearances. He also leads all in house candidates at first base in that category while also walking the least among them.

I don’t think that carries as much weight with the Royals as it does other teams, but the part where I doubt his ability to be their first baseman of the future is how they’re currently using him. In the 16 games that McBroom has started, he’s played first in just nine of them and the 9/2 game against Chicago was the first time he’d seen action there in a week and a half. Depending on your metric, McBroom and O’Hearn are interchangeable at who is the worse defensive first baseman between them but by all metrics, they both hover around average to below average. McBroom has shown slightly more from his defense in the outfield so however short or long his time with the Royals will be, it might be in the outfield the majority of the time anyways.

We’re now entering “Let’s get weird” territory. I don’t think this is likely but I can totally hear Mike Matheny dropping a sentence like “At the moment, we’re moving forward with Whit at first.” in the Spring Training leading into the 2022 season. Whit is under contract through the 2023 season if you include the club option. He will be 34 by then and as I mentioned above, Whit seems to defy all age curves thus far. But time waits for no man and if he’s not dealt over this time, I could definitely see the Royals getting creative and sending him to first base to keep his bat/presence in the lineup while his speed deteriorates and his power falls off completely. He’s played 89.1 innings at first base for the Royals over his five seasons and over that time and, to be honest, he’s been pretty gross there. I think Whit’s future with the Royals will be at second base, but he will always be a juicy trade piece when his production at the plate is maintained. I don’t see the Royals going down this path but it’s a non-zero probability.

I don’t even really want to entertain this idea but I know there has been a lot of smoke around this possibility so I’m including it. Salvy has a lot of wear on his body from the amount of games he’s caught so far and he ain’t getting any younger. His contract is also coming up at the end of next season. He’ll be 32 years old the following season and there aren’t many catchers who are able to maintain production at that age. BUT, in the small sample size that we’ve seen from Salvy in 2020, he was very good. He’s only carried and OPS over .800 in 2 seasons, and both of those are the shortest seasons he’s played (‘11 and ‘20). And that’s more than fine for a catcher that plays great defense and is the heart and soul of the clubhouse. That’s not great for a first baseman, let alone one that has 48.1 innings at first base. His value will tank if moved to first and it’ll likely require a contract extension that fans will likely be cursing similarly to how they cursed the Gordo extension. I think the Royals will extend Salvy, but it will be to be a catcher/DH. Besides, the Royals will need something better from a first baseman during that window.

In the future, I’ll try to identify some guys outside of the organization that the Royals could potentially target and what it’d take to acquire them for the contention window. But until then…