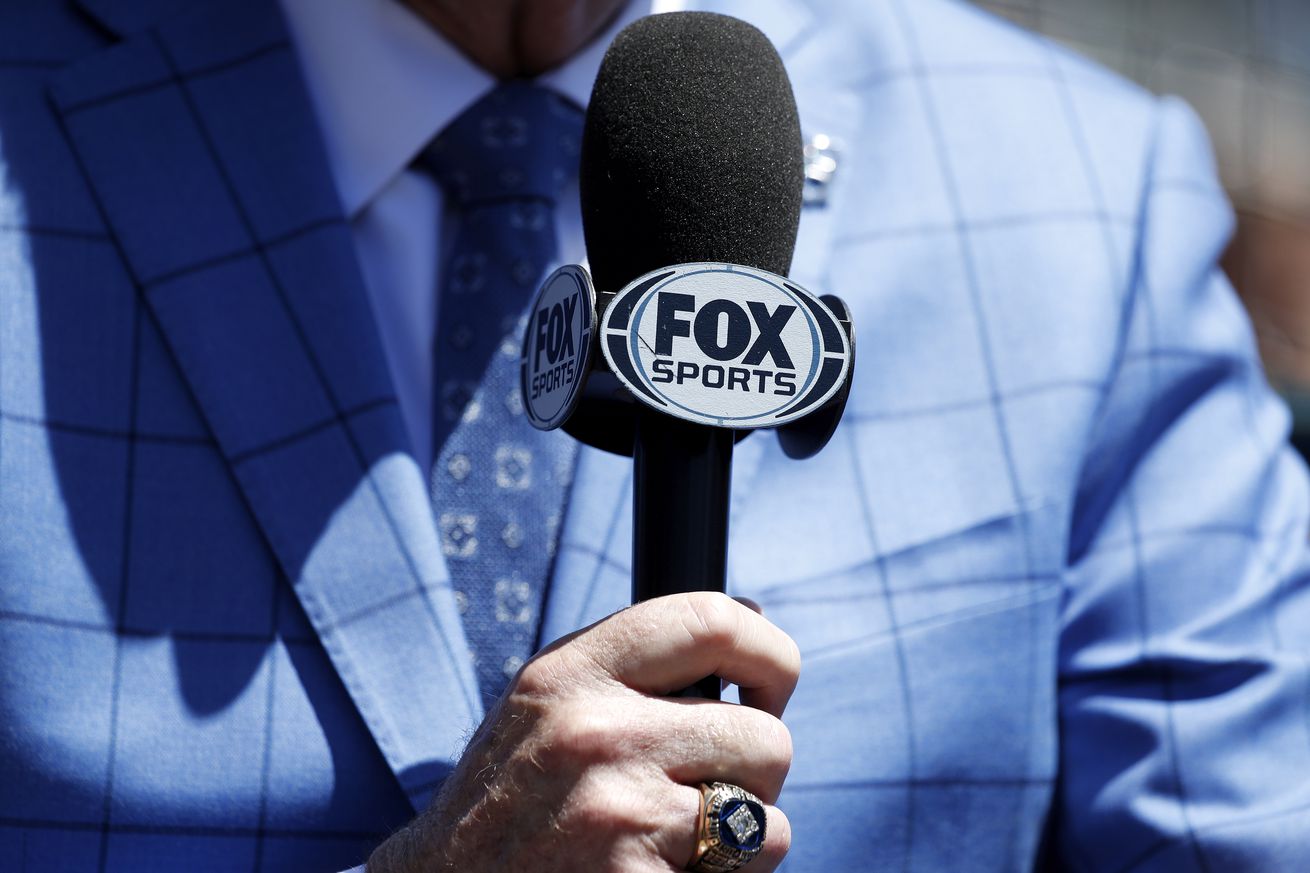 The Royals’ new TV deal will be a boon in the short term, but what’s the long term cost?

It’s hard to know when we’ll have baseball games this year, but whenever the Royals do take the field again, the games will be beamed into to our living rooms on a new TV contract. Phys and Hud and the rest of the crew will be back again, thanks to a deal the Royals are making with Sinclair Broadcast Group, who owns the Fox Sports regional networks.

Though it’s not as lucrative as other deals in baseball, the estimated $48-53 million the Royals are rumored to make annually is more than double what they made on their last TV deal. An extra $20-$30 million in revenue can really help out a small market team like the Royals, and in that regard, the new TV deal is a tremendous win for the club. But it comes at the same time as some troubling news about streaming options for Royals fans.

Before we get into the details of that troubling news, I want to touch on the current state of baseball broadcasting because it’s kind of messed up. Each team has a dedicated geographical area that’s considered its broadcasting territory. These territories were created in the radio and over-the-air TV days, and they largely represent areas where a team’s broadcast could be picked up by an antenna – not necessarily where their fanbase resides. These territories were created in part to protect local stations from the threat of national broadcasts. If a local team’s game was broadcast nationally, the local broadcast would air in the team’s territory and the national broadcast would be blacked out.

Likewise, no team could broadcast outside of its given territory, so the Yankees, for instance, could not decide that they wanted to tap into the Royals’ fanbase by broadcasting their games in Kansas City. Many teams, in an attempt to generate ticket sales, also limited broadcasts to away games and sold out home games under the old assumption that people would stop coming to games if they were available for free on TV.

Today, television broadcasts are carried by regional sports networks (RSNs) on cable, yet the same territories that were created in the antenna era are utilized to determine who can and can’t view these broadcasts. Only viewers in the Royals’ territory can watch Royals games on Fox Sports Kansas City, whether that broadcast is delivered through traditional cable/satellite or a streaming service like YouTube TV or Hulu Plus. However, MLB TV subscribers are subject to the exact opposite; only out-of-market viewers can stream games because MLB TV is considered a “national broadcast” even though it simply uses the local RSNs’ coverage of the game.

This creates some really bizarre scenarios. For instance, I live outside of the Royals’ territory, so I can view games via MLB TV. But when my father-in-law comes over and wants to watch the local team’s games, they are blacked out. And when I go to his house, where he has a traditional cable package that includes Fox Sports Kansas City, I can watch the Royals broadcast up until the first pitch, at which point the game is blacked out. It’s weird.

When ever I get down I just look at @MLB blackout map and it makes me laugh. pic.twitter.com/y4O7dlJaww

But that’s nothing. There are Royals fans who live in the team’s broadcast zone, but whose cable providers do not carry Fox Sports Kansas City and therefore can not watch games that way. Because they live within the Royals’ territory, they can not watch games on MLB TV either. Fortunately, RSNs have gradually become available on streaming services, which has been a godsend for people living in these baseball hell zones. A YouTube TV subscriber living in the Royals’ broadcast area can fire up Fox Sports Kansas City and, because they’re in-market, they won’t be blacked out. And it’s cheaper than cable. Nice.

Which gets us back to the aforementioned troubling news about streaming. Dish Network and their streaming service Sling TV abruptly dropped Fox Sports RSNs last year, right in the middle of baseball season, citing an inability to come to terms with Fox Sports’ new ownership, Sinclair Broadcast Group. YouTube TV has apparently had similar problems, and it seemed they would drop Fox RSns, until they reached an agreement with Sinclair that will allow them to reclaim all but the Los Angeles and New York markets’. However, the areas that can view each team’s games have shrunken.

As far as the Royals are concerned, this means that many fans outside of the Kansas City metropolitan area, including those in Wichita, Lincoln and Omaha, can no longer watch games on YouTube TV. The Royals can’t like this. It’s in their best interest for their product to be available to anyone who wants to view it, through whatever method of delivery they prefer. They surely know that a fan in Nebraska is a lot more likely to come to a Saturday game at The K or buy a Whit Merrifield jersey if they’ve gotten to know the players from a television broadcast. But they also can’t just walk away from the $50 million a year they’re getting from Sinclair, and even if they did, what would be the alternative?

The commissioner’s office seems concerned about baseball’s future, which isn’t as reassuring as it seems like it should be. Rob Manfred has spent his tenure brainstorming rule changes large and small to spice up the game. This year we’ll see two rule changes – limited roster expansion and a three-batter minimum – that in different ways address excessive pitching changes. This is a common complaint throughout baseball, and I’m sure there are a few existing fans that are pleased. But these changes are not going to bring in any new fans. Neither will a pitch clock or robot umpires or any of the other ideas that Manfred has for speeding up games.

That’s because the pace of play isn’t really the problem. The problem is accessibility. In an age where we have everything at our fingertips, it’s becoming more difficult to watch baseball.

It’s ridiculous that the games are impossible for some people to legally watch on television, and it’s unacceptable that affordable viewing options are limited and in constant flux. People age 18-34 are half again as likely to be cord-cutters as a 57 year old, the average age of today’s baseball fan, and that has much to do with the rising cost of cable. Last year, the average cable bill was more expensive than all other household bills combined. That sort of expense doesn’t make sense for a growing number of people, yet baseball is stuck with the cable model, thanks to the lucrative, long-term contracts teams have signed.

Young adults and people with families increasingly find themselves unable to afford to go to baseball games, too. Ticket prices have risen faster than household incomes in recent years, and stadiums seat fewer fans than they have in over half a century, thanks to the advent of luxury boxes. Doing away with the cheap seats in favor of boxes where each fan will drop hundreds of dollars a game makes financial sense for teams, but it’s doing nothing to grow a fanbase.

What if MLB gave these issues the same attention it gave pace of play? Maybe they would work out a deal with the RSNs to make any and/or every game available on MLB TV to anyone who wants it – or at the very least to those who can’t watch their favorite team on cable. And if there’s any good this world, they would finally make the postseason available on MLB TV because what’s the point of watching 30 teams play 162 games if you can’t see how it ends? And they’d loosen up on social media, too, while they were at it. You know, let baseball be fun. This would be difficult, and it might take some creativity to maintain revenue levels initially, but I imagine the long-term benefits would be tremendous.

Right now, baseball has a coronavirus problem to deal with just like every other sports league, government, place of business and household in the world. They’ll need to get through that first and foremost. And to be clear, I believe that Major League Baseball will continue to be around for years to come. It’s been surpassed by the NFL and NBA in popularity, but teams are still turning big profits, and there seems to be little risk of the league going bankrupt or collapsing. Baseball is here to stay for the foreseeable future.

But I wish I saw kids playing hotbox and 500 in the park by my house instead of just soccer and basketball. I want the name Vlad to inspire as much hope and excitement as Zion does. I want everyone to be in awe of Mike Trout and for the World Series to be must see TV. There’s no reason it can’t be that way. The only thing stopping it from happening is baseball itself.

There is no baseball right now, but it will return one day. And when it does, it will have all the same problems it did before. Major League Baseball has a product that is becoming more and more difficult to consume. And as baseball reaches fewer young people, they run the risk of having a product that no one has interest in consuming at all. I hope they can find a way to get out of their own way before that happens.