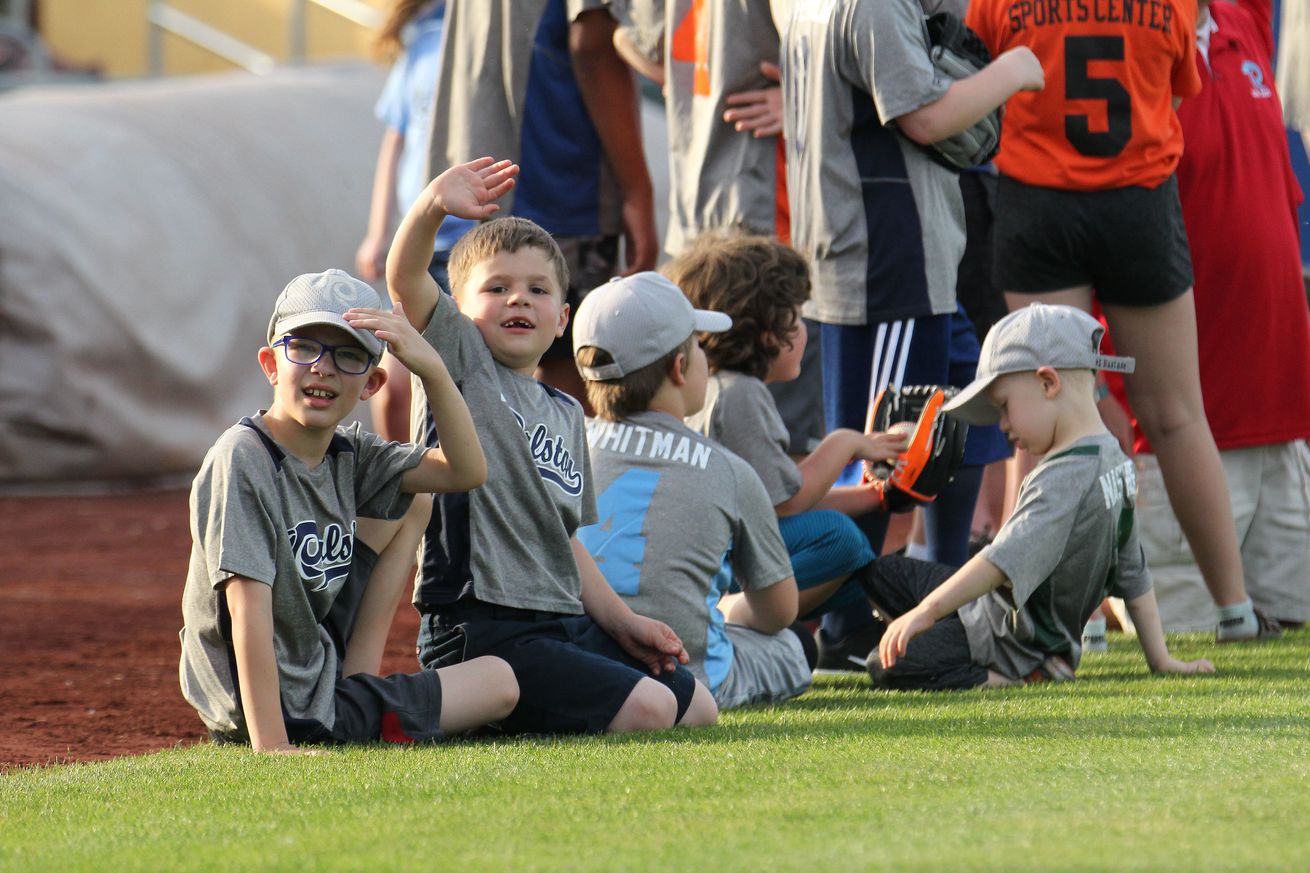 Minor League fans like these can now connect with ballplayers in a new way, by “adopting” them. | Minda Haas Kuhlmann

Dialed-in baseball fans already know about how little minor league baseball players get paid. In contrast to the big contracts for Major League stars, minor league guys have had to scrape by on bread crumbs, and not a lot has changed. A recent salary increase is a positive step, but spring training is still unpaid and offseason side jobs are difficult to find when employers know their new hire will leave for Arizona or Florida just a few months after their start date.

Players at the lower levels of the minors will still live below the poverty line, and many don’t even have basic equipment. The most well-intentioned strength and conditioning work can be undermined by a cheap diet of instant ramen, peanut butter sandwiches, and fast food. But nutritious food costs a lot, and Whole Foods isn’t open at midnight after games anyway.

Enter Michael Rivers, a Minnesota man who’s not connected to the baseball industry in any formal way, but whose brainchild has already connected 150 players to fan sponsors for the 2020 season.

Rivers began the ‘Adopt a MiLB Player’ Twitter and Instagram accounts just five weeks ago, and word is starting to spread around Grapefruit and Cactus League clubhouses. The idea is brilliant in its simplicity: players need help, and fans want to pitch in. Rivers acts as a matchmaker, pairing interested fans with players from their favorite organizations. Players and their sponsors are introduced via direct messages in Twitter. Players state what their biggest needs are, and sponsors can send care packages or send financial assistance after that.

The project was conceived as a way to seek good in the world after Rivers’ father was diagnosed with lung cancer, and once that was removed, more cancer was discovered. “I needed a win. I needed something to give me some good feelings when it was kind of rough around here.”

The first player involved was Todd Van Steensel, an indy league player who also played in the Twins organization and shares a lot on Twitter about the realities of minor league life. Rivers reached out to Van Steensel in response to one of his #MiLBStory threads to see how he could help, and then asked Van Steensel to suggest any Twins farmhands who could use a boost. It has taken off from there.

“I told him that gift cards go a really long way,” said Van Steensel, who is in his native Australia sorting out his visa for the year before coming back to the States. “After that he decided to ‘adopt’ me, and donated $25 to me via Venmo to buy myself dinner once I get to the U.S.”

Starting the account was a one-man effort, Rivers said, but as it has grown he has enlisted some help. Mariana Guzmán is a Twins blogger who helps bridge the language barrier so that Spanish-speaking players aren’t left out. Other helpers, like this Padres fan named Sean, use their contacts to find potential sponsors and players.

The identities of the players are kept anonymous from everyone but the sponsors, by design. “Maybe it’s a guy that is just hanging on to a roster spot, but he may actually need more help” than a star player, Rivers said. Players are free to post publicly about their sponsors, but not required.

Big shoutout to my sponsor @mattchewgregory and @adoptmilbplayer. Today I got a couple of gift cards and I can’t thank you enough for helping me.

The financial commitment expected from a sponsor is $100-$150 a month, and lasts for the whole season. “If you don’t set a regular standard, there might be some guys who get taken care of for the season, but then their teammate just got something once, and it’s not fair for that guy to watch others get more,” Rivers said. The contribution can be cash or items in a care package, at the sponsor’s discretion.

A future project will include a way for people to pool their resources and co-sponsor players. In the meantime, the organization More Than Baseball has set up a general donation site for fans who can make smaller, one-time donations.

Coordinating all this is time-consuming on top of Rivers’ regular job as a waiter, plus parenting duties for two kids and three chihuahuas. “My wife gives me crap for it sometimes. I basically am either at work or on my phone on Twitter trying to do this. It’s very surprising how big this has grown. I never expected it to get like this. I just thought I’d get somebody to help a couple people and that’ll be great.”

Guzmán has worked with Spanish-speaking players from poor backgrounds who don’t have their own equipment, even down to batting gloves that get shared among teammates. But some players are still hesitant to ask, as if afraid they will be asking too much. “We’re all people, and a lot of us have a little bit of pride. It’s hard for some of them to ask for help,” Rivers said. “Some players are a little afraid to be specific on what they want because they feel bad even though people are wanting to help.”

Van Steensel has seen that hesitance in his teammates. “I’ve always said to guys, don’t be afraid to ask for help when you really need it. Someone will always be willing to help. And this little project is evident of that,” he said.

Players who enroll have no obligation to repay what their sponsors give them. Rivers said, “I try to tell all of my sponsors that you’re going into this without any expectation of getting anything back. You’re doing this to help somebody else and just to feel good.”

Fans are buying in already, by adopting 150 players and counting, plus giving cash grants though that More Than Baseball page. And just last night, MTB launched a project that seeks to match players with host families.

Maybe the future of Minor League Baseball is that players receive a living wage. In the meantime, social media and widespread human kindness are filling in the gaps.