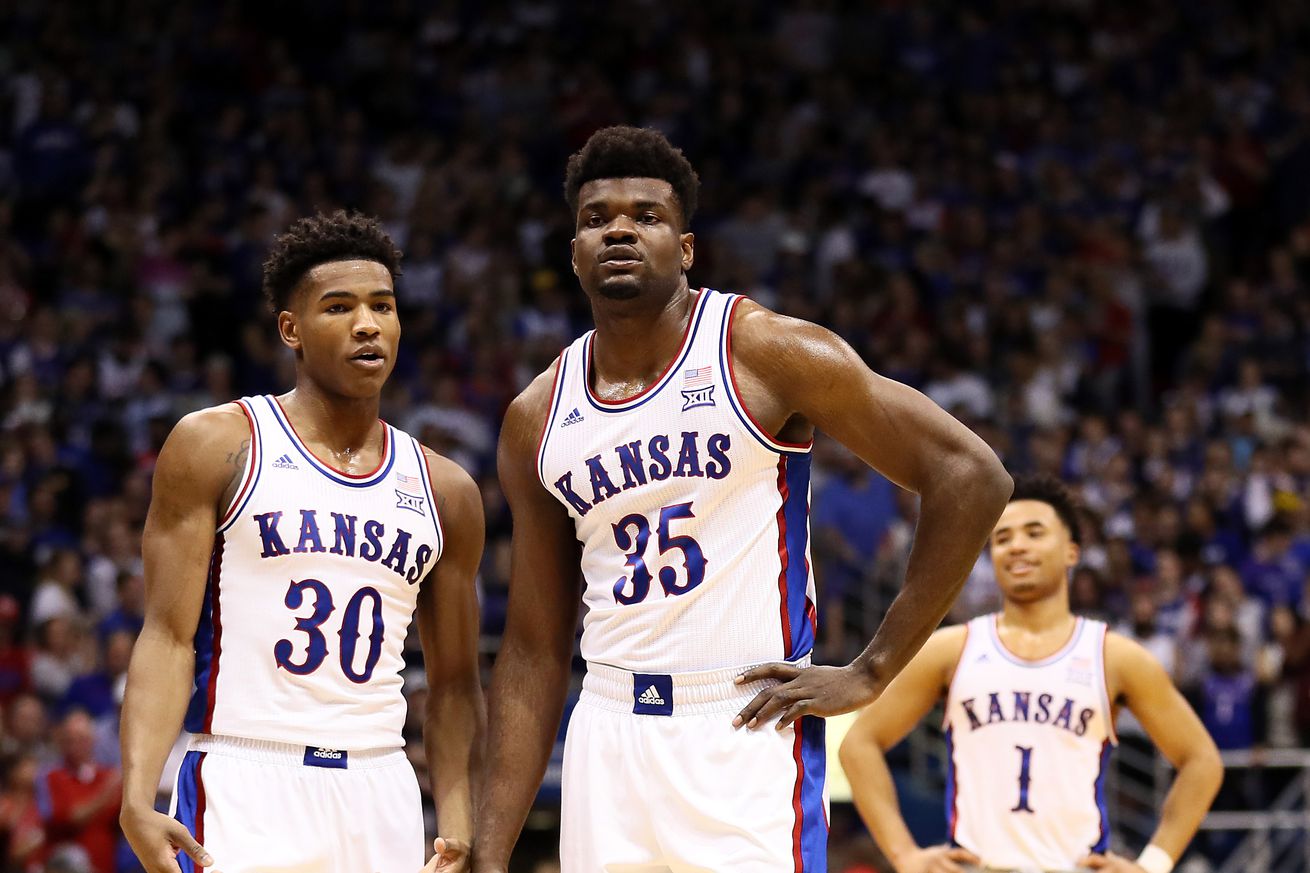 Hey! There’s something you don’t see in a toilet everyday

KU softball sweeps first day of Rock Chalk Challenge | KUsports.com
Against Wichita State, KU scored two runs in the first and one in the second before putting the game away with five runs in the sixth. Junior outfielder Brittany Jackson and senior Sam Dellinger both finished with a homer, going a combined 4-for-7 at the plate. Jackson drove in three runs to lead KU’s offensive attack.

Kansas challenges TJ Gassnola text referencing Deandre Ayton
KU has released its lengthy response to the NCAA’s notice of allegations. One topic addressed in multiple sections — both the University’s response and that of coach Bill Self — is a text sent by former Adidas consultant TJ Gassnola to the KU coach that referenced former Arizona star Deandre Ayton.

Silvio De Sousa’s return to KU lineup from suspension won’t involve large role | Smithology | KUsports.com
With No. 1-ranked Kansas playing so well and so many pages of documents to scour in KU’s response to the NCAA’s Notice of Allegations, it’s easy to forget that the Jayhawks are about to add another big man to their lineup.

NBA tells teams to plan for chance of games without fans amid coronavirus concerns
“Nah, that’s impossible,” James said after the Lakers’ 113-103 win over the Milwaukee Bucks. “I ain’t playing. If I ain’t got the fans in the crowd, that’s what I play for. I play for my teammates, I play for the fans. That’s what it’s all about. If I show up to an arena, and there ain’t no fans there? I ain’t playing. So, they could do what they want to do.”

Joakim Noah agrees to deal with Clippers, sources say
Noah, 35, will join the Clippers on a 10-day contract next week, but there’s optimism that he would finish the season with the team barring any setbacks, league sources said.

LeBron James helps Lakers clinch first playoff berth since 2012-13
“I came here to put this team and put this franchise back where they needed to be,” said James, whose first season in Los Angeles was derailed by a groin injury that limited him to 55 games. “The league is not what it is if the Lakers are not winning. And that was one of my responsibilities, one of my goals when I came here.

Nets, coach Kenny Atkinson agree to part ways
“After discussions with Kenny about the progress of the season, we mutually agreed that a coaching change would be in the best interest of the team,” general manager Sean Marks said in a statement. “This was an extremely difficult decision, however the organization believes it is one that is necessary at this time.

New Music Friday: Stream Albums from Noel Gallagher, Mandy Moore, and More | Consequence of Sound
Noel Gallagher’s High Flying Birds are back with a new EP dubbed Blue Moon Rising. The five-track collection marks the third EP from the elder Gallagher brother’s band in under a year: Black Star Dancing came in June, followed by This Is the Place in September. Like those previous efforts, the new release features three original songs and two remixes

Daily Inter Lake – Breaking News, MudMan to reopen burger restaurants as for-profit businesses
The restaurants had shut down after an outpouring of allegations against MudMan and Potter’s Field founders, Mike and Pam Rozell. Nearly two dozen sources told the Daily Inter Lake last summer the ministry and MudMan operated as “a cult” and accused the Rozells of psychological, verbal and spiritual abuse.

The Florida Department of Health confirmed the deaths on Friday night. The state