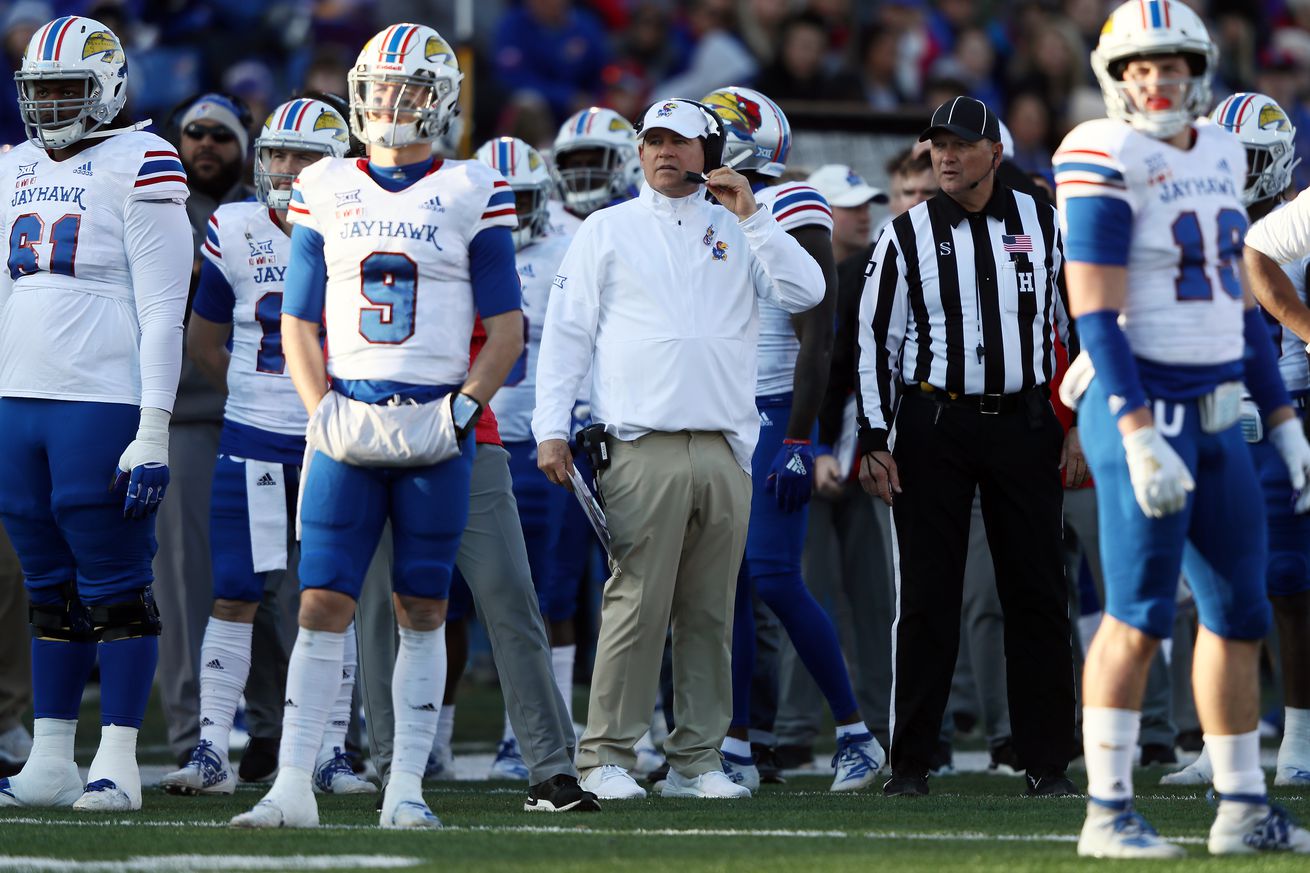 Hey, buddy! Down in front!

Daylon Charlot hoping to catch on with NFL team after pro day
“They said it was pretty big; I don’t know what they go by or whatever,” Charlot said after finishing his workout. “I’m a receiver so we need to catch the ball. So I feel like that’s a big plus for me going to the next level.”

247Sports’ Way-Too-Early Top 21 teams for ’21
Typically ‘way-too-early’ rankings don’t come out this early. There’s a whole NCAA Tournament to base them on, with those who rank teams having the benefit of seeing that extra slate of games (along with other postseason tournaments like the NIT) to help make evaluations.

Bryce Torneden recaps eventful KU football pro day workout
Off the back of his KU football pro day workout, Bryce Torneden was reportedly extended an invitation to participate in the Kansas City Chiefs’ pro day for athletes who either grew up in the area or played collegiately in the area. But since the invitation was extended, the NFL reportedly halted all draftee facility visits due to concerns over COVID-19 (coronavirus).

Marcus Garrett reflects on 19-20: ‘We felt like it was our year’
The KU basketball season has wrapped up due to the NCAA Tournament cancellation, and thus there was never a completion to the Jayhawks’ bid for a national championship — one way or another.

NCAA – No brackets for canceled tournaments
“The important work of the basketball committees is to set up competitively-balanced brackets to determine national champions,” Gavitt said. “I don’t believe it’s responsible or fair to do that with incomplete seasons — especially for tournaments that unfortunately won’t be played.”

Source — Bucs to franchise LB Shaquil Barrett following breakout 2019
After signing a one-year prove-it deal with the Bucs for $4 million last offseason, Barrett did just that. In his first year as a full-time starter, Barrett went from fighting for a job in the fourth preseason game to finishing with a league-high 19.5 sacks in 2019.

IOC official says no deadline for decision on Olympics
The leader of the IOC’s coordination commission for the Tokyo Olympics said there is no May deadline to cancel the games and he remains confident the event will go ahead despite sports coming to a virtual standstill globally amid the coronavirus outbreak.

Kalispell hospital to not allow visitors, close affiliated fitness centers | KECI
“Protecting our patients, our employees and our community is our highest priority,” says KRH Chief Medical Officer Doug Nelson, M.D. “We are taking important steps to help stop the transmission of COVID-19, which is critical in keeping you safe. Hospital operations are continually being adjusted to ensure our personnel and physicians are prepared to meet those situations that a pandemic environment can exacerbate. This is a very fluid situation here and across the country. ”

NYC Shuts Schools, Restaurants and Bars: Coronavirus Live Updates – The New York Times
Taking drastic action in the face of the coronavirus, New York City is shutting down its public school system, the nation’s largest with 1.1 million students, and closing the restaurants and bars that Mayor Bill de Blasio called “the heart and soul of our city.”

California will use hotels to shelter homeless from Covid 19 | The Sacramento Bee
California state government is procuring hotels and motels to shelter the homeless as part of the state’s effort to slow the spread of coronavirus, Gov. Gavin Newsom said Sunday.

When is the New IRS Tax Filing Deadline for 2020? – Coronavirus Delay | CPA Practice Advisor
As America and the world continue to combat the coronavirus, and most major sporting, business and social events have been postponed or canceled, the IRS and Treasury are expected to update tax professionals and taxpayers about a possible change to the annual income tax filing deadline on Monday. The deadline is traditionally April 15 of each year.

‘Simpsons’ Writer Calls Perversion of Classic Episode During Coronavirus Outbreak “Gross” | Hollywood Reporter
On May 6, 1993, the episode titled “Marge in Chains” aired. The 24th episode of the fourth season of the iconic Fox cartoon revolved around an exhausted Marge Simpson getting arrested for accidentally shoplifting while she is getting supplies for her sick family, who all have the “Osaka Flu.” The episode opens in Japan where an ill factory worker coughs into boxes which are to be used to ship a popular juicer everyone in Springfield orders. The town — six to eight weeks later, for shipping and delivery — then becomes ill.

Coronavirus: Germany tries to stop US luring away firm seeking vaccine
Berlin is trying to stop Washington from persuading a German company seeking a coronavirus vaccine to move its research to the United States, prompting German politicians to insist no country should have a monopoly on any future vaccine.

Live updates: Coronavirus deaths pass 6,500 worldwide – CNN
The novel coronavirus has killed more than 6,500 worldwide, according to an estimate from Johns Hopkins University, which is tracking cases reported by the World Health Organization and additional sources.