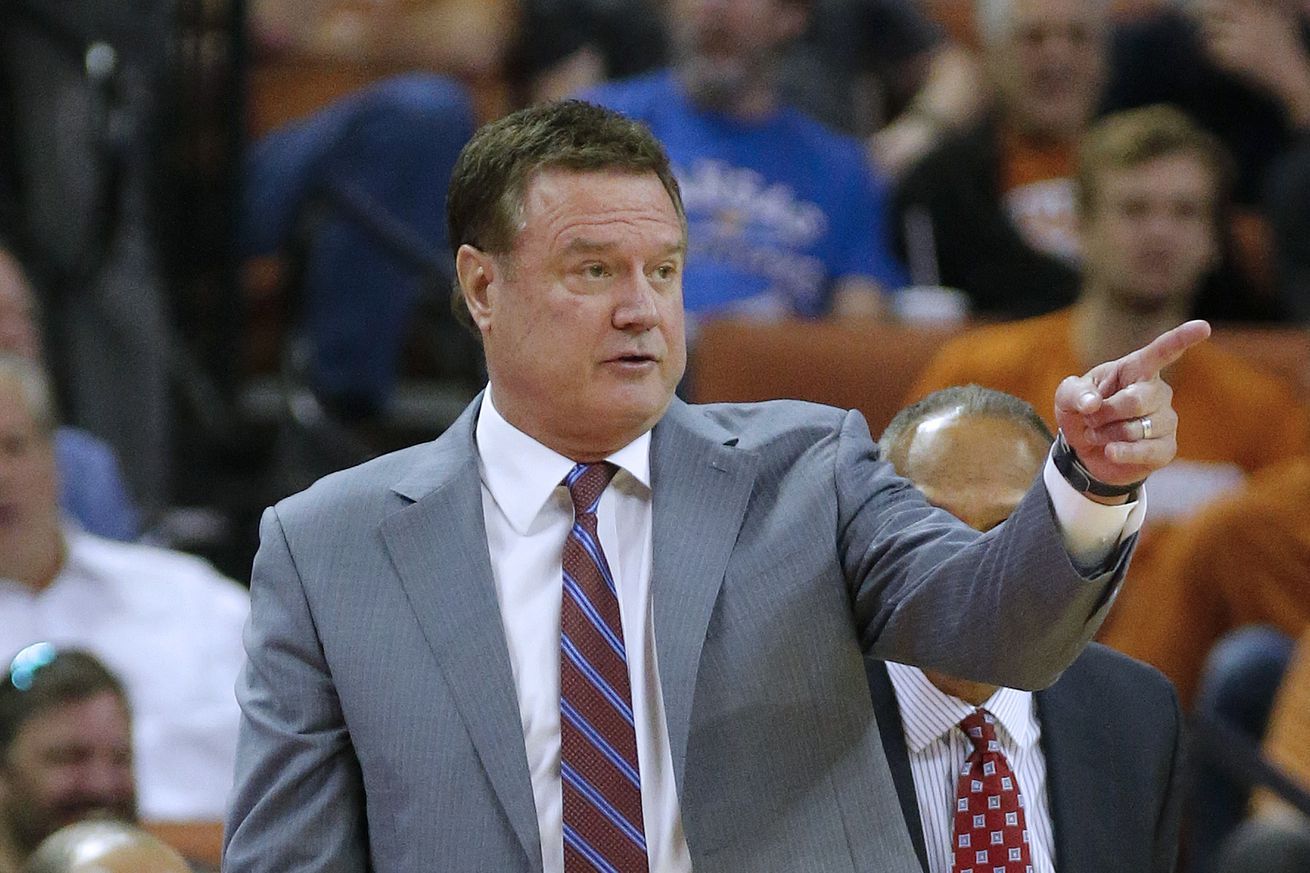 You call this writing? If I puked in a fountain pen and mailed it to the monkey house I’d get better scripts!

Paul Pierce makes list of top 40 NBA players of past 40 seasons | ‘Hawks in the NBA | KUsports.com
A recent retiree and future hall of famer himself, Pierce averaged 19.7 points, 5.6 rebounds, 3.5 assists and 1.3 steals over the course of 19 seasons, after Boston made him the No. 10 pick in the 1998 draft. “The Truth” was a 10-time all-star, four-time member of one of the three tiers of all-NBA teams and the 2008 NBA Finals MVP.

Bill Self aiming for 700th career win as KU basketball faces TCU
Should Self reach the 700-career wins mark, he would join the likes of John Calipari, Bob Huggins, Roy Williams, Jim Calhoun, Rick Barnes Jim Boeheim and Mike Krzyzewski as actives coaches who have completed the feat. In total, Self would be the 32nd coach in the history of men’s college basketball to reach 70

Les Miles on HS-only 2020 class: ‘This is what I want to do’
“Most entirely high school guys,” Miles said on his Hawk Talk radio show. “Ultimately, you want to get the opportunity to get that player on his campus and make him better. And if you go for a two-year junior college guy, you’ve got two years to make him better, so what you see on film is really going to be what you get. … With those players that are playing three years and four years, it makes a difference how they finish their technique. They’ll be a much better athlete, a much more competent competitor.”

Notes: Self reacts to Andrew Wiggins trade; Dajaun Harris update
“That’d been rumored for a while, but yeah, I think it’s great. It’s not going to obviously pay dividends for him this year as far as getting a chance to play deep into the playoffs and things like that, but you get Wiggs out there along with Steph [Curry] and Klay [Thompson] and Draymond [Green], to me that looks like a pretty good quartet to play with. So I’m real excited for him. And he’s having a really good year this year. He’s scoring the ball and everything, but I think the T-Wolves have lost 13 in a row, so I’m sure it’ll be nice for probably a [change of scenery], even though he told me he really likes Minneapolis.”

Bill Self: Jalen Wilson return ‘looking less and less likely’
“Not officially, but it’s looking less and like there is the potential to return this year,” Self said. “I think I told you guys, we wanted to check out his foot, and we thought he was making really positive progress — and he still is — but then he hurt his back. He got those back spasms and missed a week, and he’s just now back to where he can probably attempt to try to go 100 percent or be close to it.”

NBA All-Star draft — Team LeBron takes AD first overall; Giannis selects Joel Embiid at No. 2
When Antetokounmpo was trying to choose among Harden, Walker and Young, Barkley chimed in, “You don’t want the dribbler?” in reference to Harden. Antetokounmpo smiled and said, “I want someone who is going to pass.”

How the Lakers-Clippers rivalry spilled into the trade deadline
In the hours leading up to Thursday’s 3 p.m. ET deadline, both teams were engaged with the New York Knicks in a race for forward Marcus Morris Sr. Over the previous weeks, executives from the Clippers and the Lakers eyed one another as they stalked Morris, a role player with the type of edge that contending teams find valuable.

Al Horford — Another loss ‘puts a lot of things in perspective’ for 76ers
Days after Ben Simmons called the Sixers “soft” and Joel Embiid cited the team’s spacing issues, Philadelphia suffered its fourth consecutive loss — all on the road — Thursday night in Milwaukee.

The Conversation: What’s a church? That can depend on the eye of the beholder or papers filed with the IRS – The Salt Lake Tribune
Despite being registered with the IRS as “churches,” these organizations and others like them don’t claim to be churches publicly. In fact, Gideons International — an association of businessmen and their wives who leave Bibles in hotel rooms — says on its website that it is neither a denomination nor a church. And yet, for tax purposes, Gideons claims to be a church.

2020 Democratic candidates vow to beef up IRS | TheHill
Democratic presidential candidates are proposing to give the IRS more resources for enforcement as they seek to combat inequality and raise revenue for their spending priorities.

He Was ‘Star Wars’ Secret Weapon, So Why Was He Forgotten? | Hollywood Reporter
Ashley Boone Jr., the first black president of a major Hollywood studio, helped make George Lucas’ quirky space opera a hit in the 1970’s — yet chances are you’ve never heard of him: “He was way ahead of his time.”