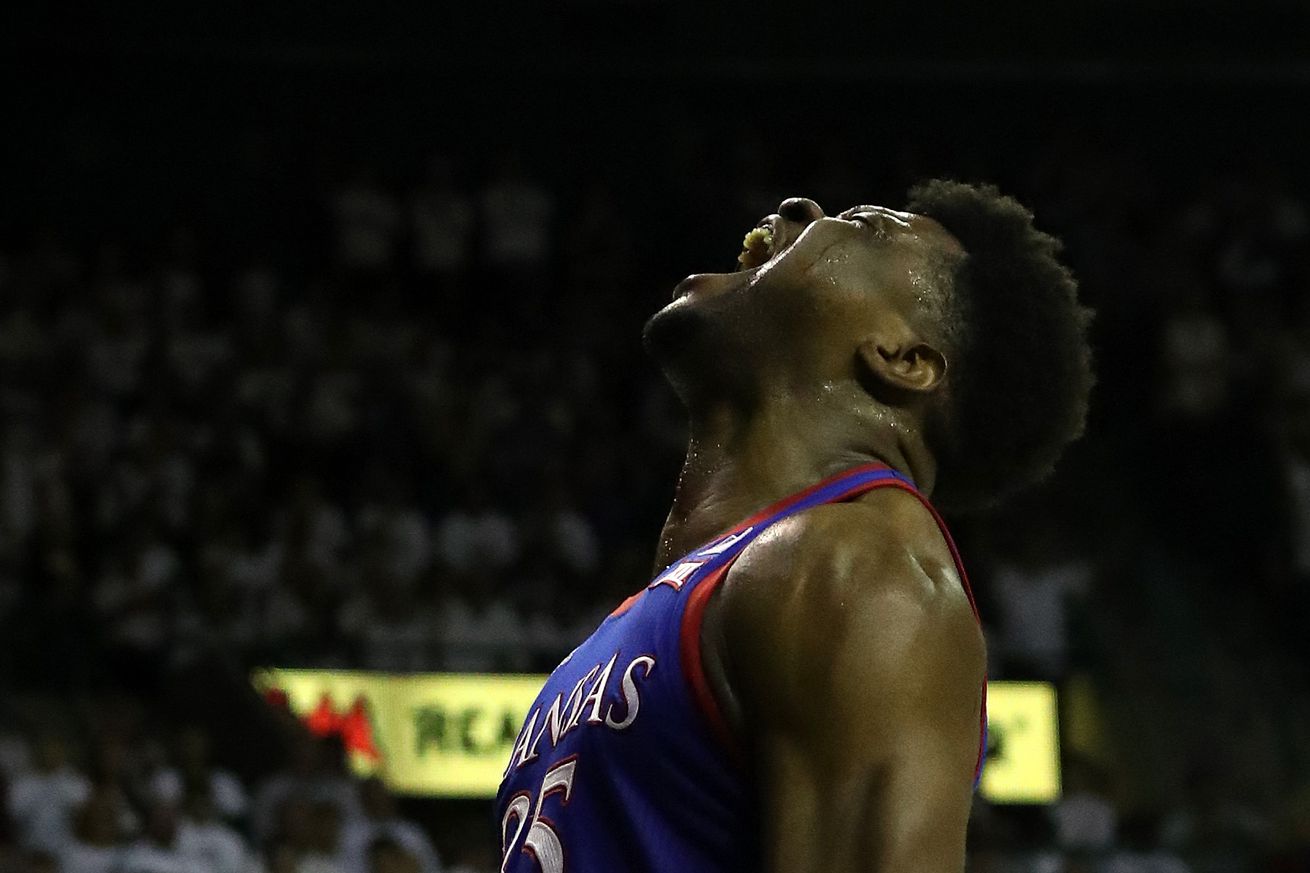 I have an unorthodox solution. A fantastic voyage, if you will! Three scientists, one a beautiful woman, will be shrunk to microscopic size and will rendezvous in Mr. Simpson’s lower colon

Sunday Snap Judgments and Big 12 Hoops Power Rankings
College football season is over and all the focus is on basketball now. Teams have hit the halfway point of conference play and our opinions on each squad are clearing up. Each week, we’ll recap what happened for each team in the Big 12 Conference over the previous seven days, then update our Actually Accomplished Rankings, a version of a power ranking that does not take into account who we “think” is better, but rather who has done the most on the court.

The tweak Bill Self made to fix Kansas’ offense against Baylor
“Probably the toughest we’ve played all year long,” Bill Self said to KU color analyst Greg Gurley moments after the final buzzer. “God dang, we competed. … That was a heck of a win.”

Udoka Azubuike emotional after dominant outing at No. 1 Baylor
There could be several reasons for the emotions. For starters, the last time the two teams met, Azubuike was a non-factor on the offensive end. Baylor won the game while limiting Azubuike to just six shots. This time, it was Azubuike who rendered Baylor’s defense ineffective. The big man scored a game-high 23 points on 11-for-13 shooting.

Media raves about Kansas after huge win at Baylor
No. 3 Kansas avenged its loss to No. 1 Baylor earlier this season and staked its own case as the nation’s best team with a 64-61 victory in Waco Saturday. The Jayhawks led for most of the game, but still put fans on the edge of their seats with some rough plays late, giving Baylor a final chance down three points, though Jared Butler’s final attempt missed.

Shane Jackson: Jayhawks become team to beat in college basketball after besting Bears | KUsports.com Mobile
Throughout KU’s 64-61 win over No. 1 Baylor, the sophomore point guard was as animated as anyone on the court after a big play by the third-ranked Jayhawks. Dotson even shushed the Baylor faithful following a 3-pointer within the first seven minutes of a heavyweight battle Saturday afternoon inside the Ferrell Center.

Kansas vs. Baylor: 3 things we learned from Jayhawks’ thrilling upset – SBNation.com
In what may have been the best overall game of the 2019-20 college basketball season to date, No. 3 Kansas toppled No. 1 Baylor, 64-61, Saturday afternoon in Waco. The win was sweet revenge for a Jayhawk team that lost to the Bears at home by 12 on Jan. 11

UNLV hands No. 4 San Diego State its 1st loss, 66-63
“We lost. It was the first time it happened, so it doesn’t feel good,” Flynn said moments after the fired-up UNLV Rebels beat SDSU 66-63 on Saturday night, snapping the Aztecs’ 26-game winning streak and ending their run as the nation’s only undefeated team.

Mavs’ Mark Cuban says bad officiating ‘not a single game issue’
“So they call a goaltend,” Cuban’s tweet began. “They literally blew the whistle that it was a goaltend. There was a putback after the whistle. After review they said no goaltend but count the basket? WTF is that? That’s NBA officiating.”

Real Madrid’s Hazard to miss City Barcelona clashes with shin fracture
“Following the tests carried out today on our player, Eden Hazard, he has been diagnosed with a fracture to his right distal fibula,” a club statement said. “His recovery will continue to be assessed.”

Fans heckling Astros spring opener get signs confiscated
Two men in Nationals gear sitting behind the Astros’ dugout briefly held up crudely drawn signs just before first pitch. One read: “You see my hate?” in large block letters. Another said: “Houston *’s” to read “Houston asterisks,” suggesting the Astros’ 2017 World Series title should be permanently blemished because of the cheating.

Tyson Fury stops Deontay Wilder as corner throws in towel in 7th
Fury scored a pair of knockdowns in a dominating victory that ended in the seventh round when Wilder’s corner threw in the towel before an electric, sold-out crowd of 15,816 on Saturday night at the MGM Grand Garden Arena. Fury retained the lineal heavyweight championship and seized Wilder’s WBC belt with the win.

6 Takeaways From The Nevada Caucuses, Including Bernie Sanders As Front-Runner : NPR
The independent from Vermont ⁠— who is running as a Democrat and often speaks about the ills not just of Republicans, but also of Democrats ⁠— handily won the Nevada Democratic caucuses.

MDT to Remove Bypass Roundabout, Build Overpass at Foys Lake Road – Flathead Beacon
In an effort to reduce traffic congestion and improve flow at the Foys Lake Road intersection of the Kalispell Bypass, the state transportation department will remove the existing roundabout and replace it with an overpass, while also expanding a stretch of the roadway to four lanes.

Donald Trump’s L.A. Fundraiser Guests Disgusted by Food in Bathroom
Donald Trump’s Beverly Hills fundraiser guests — at least some of them — say they are totally grossed out by the fact appetizers from the function were left sitting out by a toilet.

BYU Pole Vaulter Pierces Scrotum In Horrific Accident, Needed 18 Stitches
The 21-year-old was having a pretty typical training session at the BYU track — recording it to post on TikTok — when disaster struck.

At first, it seemed like a standard jump … but McWhorter’s pole didn’t fall the way it supposed to and essentially impaled his scrotum.