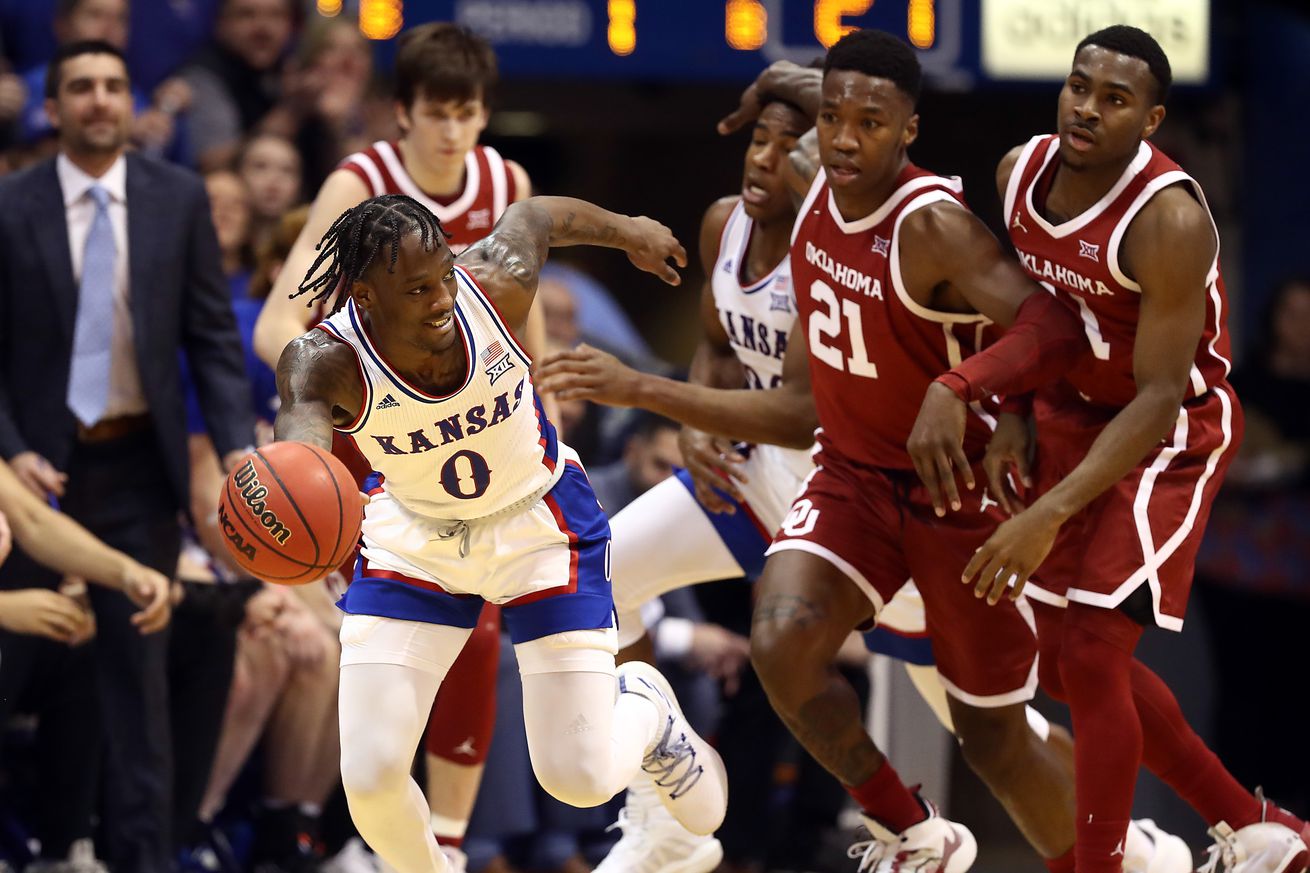 Mmm. I dreamed about her again last night, Smithers. You know that dream where you’re in bed and they fly in through the window?

KU football notes: Two senior analysts join Les Miles’ program
One of the two Friday additions was a senior analyst for the defense in Brock Caraboa. He most recently was the defensive coordinator at his alma mater, Marian University, where he served in that role over the last four seasons.

Media aglow about Marcus Garrett, Kansas after win over Oklahoma
Garrett looked like a full-blown star against the Sooners, helping Kansas to build a nine-point first-half lead with sweet shooting from deep — never considered a Garrett specialty — and his four first-half steals. And while he didn’t add to his steal total in the second half, he continued to make it rain against an Oklahoma team perfectly willing to let him shoot right up until the point that he buried the Sooners with said shots. Garrett finished with a career-high six made 3-pointers and a career-best 24 points, to go with his five rebounds, seven assists and four steals.

Marcus Garrett has 3-point eruption in front of Svi Mykhailiuk
Marcus Garrett doubled his career-best mark for 3s in a game on Saturday. Garrett, who was shooting worse than 29 percent from 3 entering the day, drilled six 3s to raise his 3-point percentage on the year to better than 36 percent. He scored 24 points, another career-high mark.

Sunday Snap Judgments and Big 12 Hoops Power Rankings
College football season is over and all the focus is on basketball now. Teams have hit the halfway point of conference play and our opinions on each squad are clearing up. Each week, we’ll recap what happened for each team in the Big 12 Conference over the previous seven days, then update our Actually Accomplished Rankings, a version of a power ranking that does not take into account who we “think” is better, but rather who has done the most on the court

Bracketologist: Kansas a No. 1 seed barring disaster
Talking during Kansas’ 87-70 victory over an Oklahoma team that Joe Lunardi projected as a No. 9 seed in his most recent bracket, ESPN’s bracketologist was asked how much of a lock Kansas was for a No. 1 seed. Lunardi, who also said Oklahoma wasn’t “anywhere near as close to the bubble” as the Sooners have been the last few seasons, gave his thoughts.

Photo gallery: Kansas wears alternate jerseys in win over OU
Already with a road win over Oklahoma to its name, the No. 3-ranked KU men’s basketball team made it two for two on Saturday, taking an 11 a.m. contest against the Sooners in Allen Fieldhouse, 87-70.

Udoka Azubuike’s show of emotion in win over OU a sign of growth
“You’ve just got to let it loose at some point,” Azubuike said. “I wanted the ball for a stretch and I didn’t get the ball because they were denying me the ball. … And as soon as I dunked it, I just let it all out.”

Hockey fans miss large portions of Kings-Avs game at Air Force’s Falcon Stadium because of traffic
The Los Angeles Kings won a 3-1 thriller over the Colorado Avalanche in their outdoor game at the Air Force Academy’s Falcon Stadium on Saturday night. But thousands of fans didn’t see large portions of the game, and many left before its conclusion, thanks to a horrific traffic mess that turned 45-minute journeys from Denver into four-plus-hour expeditions.

Long shot Bam Adebayo wins All-Star skills challenge
“It’s because all she’s been through and all the struggles she’s been through and what the living conditions I had to go through and how she still strived to make me happy and make our house feel like home,” Adebayo said. “I can’t do nothing but give her that and keep giving her every other accolade I get.”

NBA All-Star Game MVP award named in honor of Kobe Bryant
“We were thinking about what the best way is, one of the ways to honor Kobe,” Silver said at the United Center before the league’s Saturday night festivities got underway. “It happened to be that his loss came shortly before we were moving into All-Star festivities. I think one of the things that stands out with Kobe, of course in addition to his five championships, is that he has [made 18 All-Star teams] and tied for the record of four MVPs.

6 Tax Deductions You Can Claim Without Itemizing
For itemizing to make sense, you would therefore need your deductions to exceed the above threshold that applies to you. But there are some tax deductions you’re allowed to claim even if you don’t itemize on your return. These deductions are known as adjustments to income and could result in some serious savings.

Israeli group plan Burning Man-like event in occupied West Bank | World news | The Guardian
A plan by an Israeli group to hold a Burning Man-style event in the deserts of the occupied territories has sparked frustration among Palestinians and dismay from Israeli festival enthusiasts who say it goes against the original event’s founding principles.

PHOTOS: Inside Culver’s, one of the best burger chains in the US – Insider
Hopefully, Culver’s will continue expanding around the globe so more people can have a taste of these meals that taste homemade and are served with a side of Midwestern hospitality.