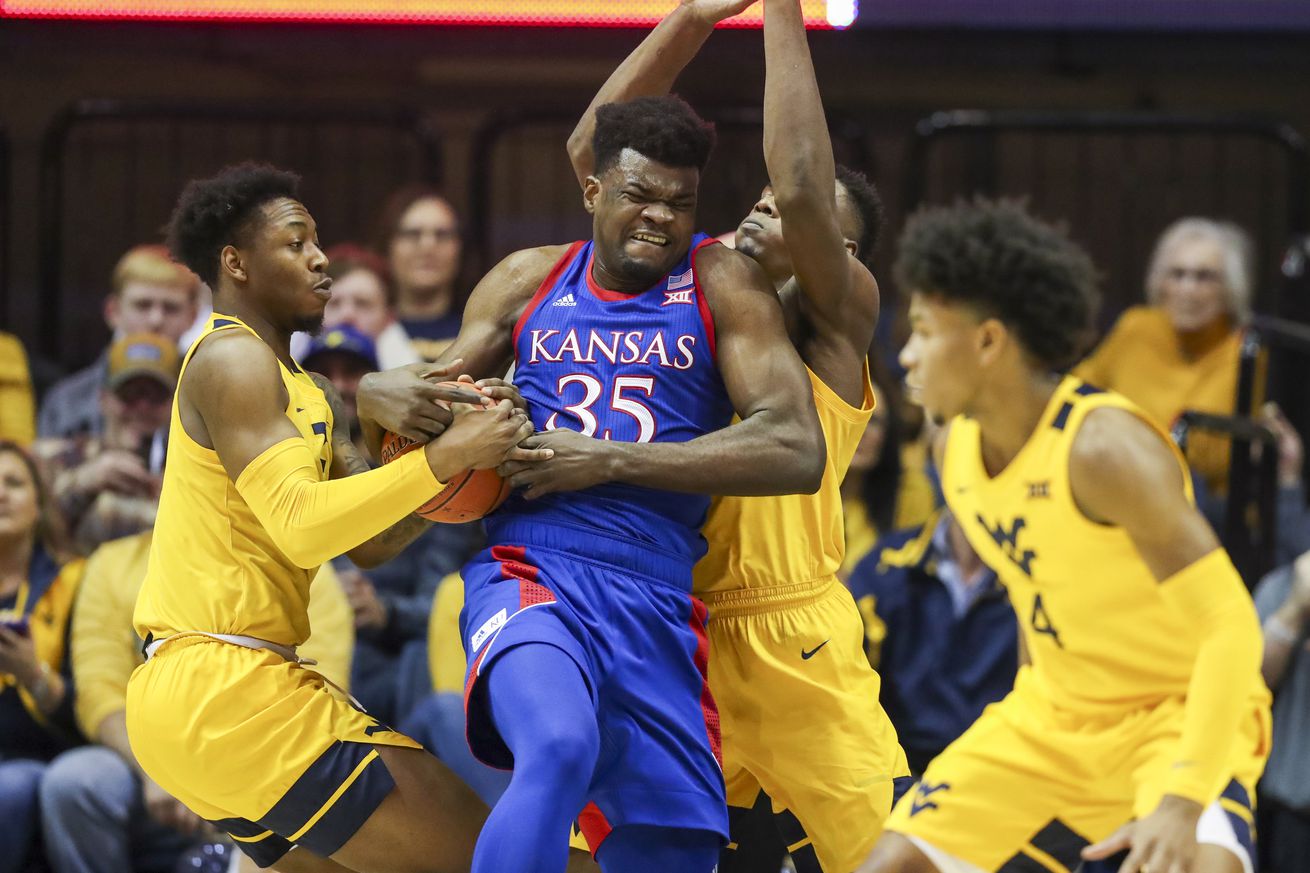 Jayhawks are still unbeaten on the road in Big 12 play.

If you don’t have ESPN+ or reliable high-speed internet, you missed a gritty performance by the Kansas Jayhawks in Morgantown on Wednesday night.

The first half was just downright ugly for Kansas. The teams went back-and-forth for the first nine minutes or so before West Virginia jumped out to a 20-14 lead with 10:29 to go to the half following a basket by Derek Culver. Kansas closed it to 20-19 just a few minutes later, but couldn’t quite catch up as WVU pulled away again. After stretching their lead to 30-21, the Mountaineers would have to settle for a 30-24 halftime lead.

Kansas shot just 1-8 from behind the arc in the first half, Azubuike spent most of the half on the bench with two fouls, and the Jayhawks ended the half with five guards on the floor as David McCormack had three fouls of his own.

The Jayhawks came out on fire in the second half. A quick 6-0 run by Kansas before the 18-minute mark tied up the game, but WVU responded with a 6-0 run of their own. The lead streched back out to 41-32 following a Miles McBride jumper with 13:31 to play, forcing Bill Self to use up yet another timeout.

From that point on, Kansas looked like a completely different team. Over the final 13:30 of the game, KU outscored West Virginia 26-8. Kansas locked in defensively. The West Virginia offense couldn’t keep the ball out of Marcus Garrett’s hands, and KU finally started taking – and making – open threes.

A couple of Azubuike blocks in the final minutes all but sealed West Virginia’s fate as Kansas emerged from the WVU Coliseum with a rare (and hard-fought) victory by a 58-49 final score.

Devon Dotson led Kansas in scoring with 15 points, hitting a clutch 3 that really ignited KU’s offense late in the second half.

Marcus Garrett was probably KU’s MVP in this one. Although he had an uncharacteristic 6 turnovers, Garrett stuffed the stat sheet with 9 points, 7 rebounds, 4 assists, and 5 steals.

Isaiah Moss was key in the second half as well. Despite being shut down offensively for most of the game, he finished 3-5 from behind the arc (and 4-4 from the stripe), making his final two 3-point attempts during KU’s run over the final eight minutes of the game.

West Virginia scored just 19 second half points after putting up 30 in the first half.

Not sure what Fran was watching on some of those replays, but who am I to feed the “Fran hates KU” narrative?

West Virginia fans continue to impress me with their ability to complain about correct calls.

I thought this game was lost at least four separate times, but each time Kansas answered. This really could be a special season.

Kansas will host Oklahoma in Allen Fieldhouse at 11 AM on Saturday, February 15. The game will be televised on ESPN.