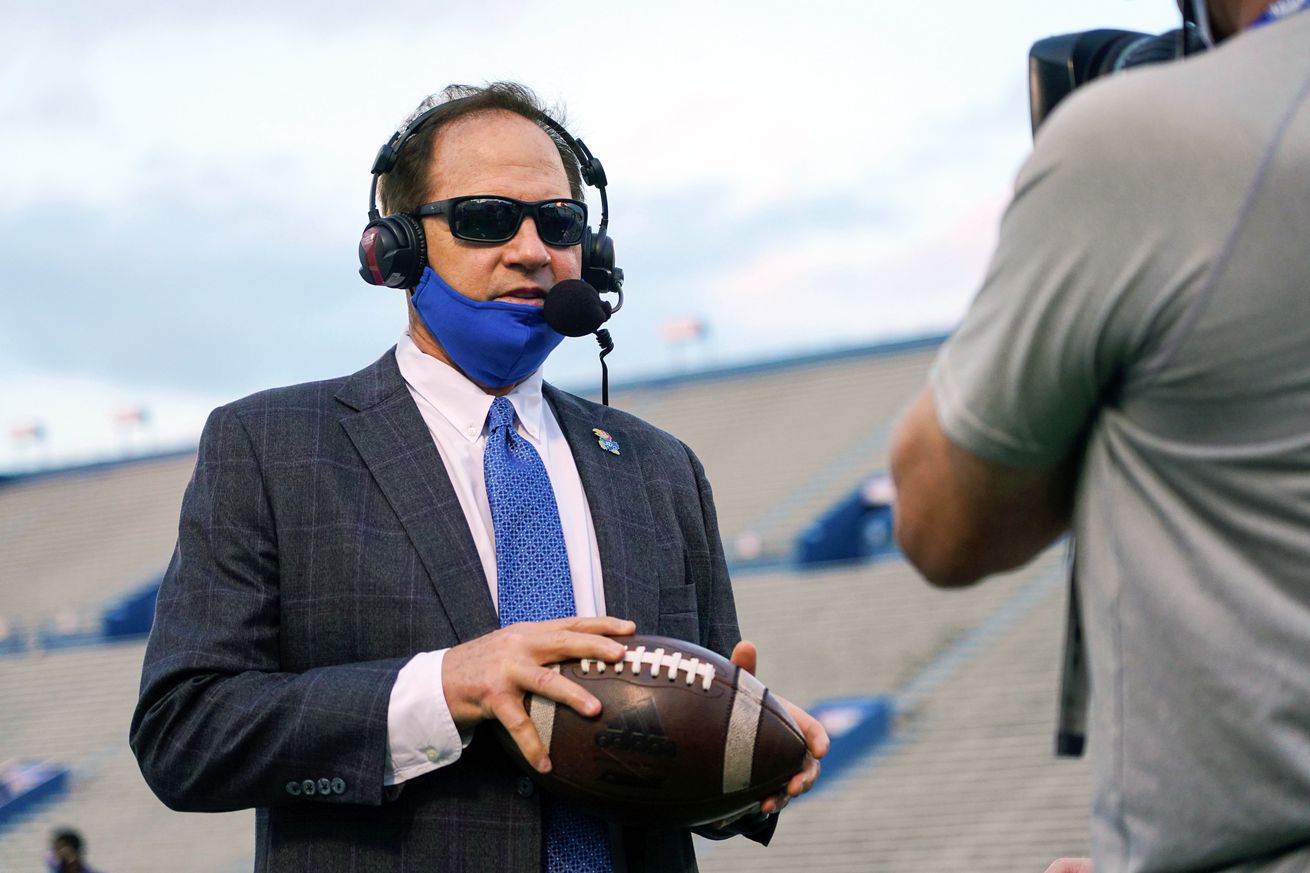 Jayhawks lose 42-23 to Coastal Carolina in an abysmal performance.

Through one half of this game, Coastal Carolina appeared to be a more talented, skilled, athletic, and better-coached football team than the Kansas Jayhawks. Two early turnovers helped doom KU out of the gate, but they couldn’t accomplish anything offensively, and looked absolutely clueless defensively, so the turnovers simply made a bad situation worse.

Thomas MacVittie got the start, his first as a D1 quarterback, and managed to throw an interception on the first drive (though it was a deflection and not entirely his fault). “Dual threat” QB Miles Kendrick also got some early playing time as well, losing three yards on two first half carries while adding an interception of his own late in the half after Kansas finally got a defensive stop. Offensive guru Brent Dearmon had no answers for this middle of the pack Sun Belt defense he was up against, with his initial strategy vanilla, uninspired playcalling somehow falling flat. It was reminiscent of what we saw late in 2019 after the brief midseason surge of competent offense KU showed.

The defense was simply awful. They avoided giving up big 1st half plays for the most part, but looked like they’d never seen an option play before. Freshman QB Grayson McCall might as well have been Jalen Hurts. When they did have to throw, he completed 7 of 9 first half passes for 86 yards and 3 TDs, while adding 41 on the ground with another score.

The halftime score was 28-3, with Coastal running 40 plays before the half, adding up to 195 yards. On a per play basis the yardage allowed wasn’t bad, but Coastal is a methodical running team, and every time they needed a play they got one. Kansas, with wunderkind Dearmon at the helm of the offense, racked up just 154 yards with three turnovers. They also missed a field goal, but it was 53 yards out so I won’t rant about that. The last second field goal that went in needed the help of the crossbar.

Given the opponent, the first half of this game was every bit as bad as any of the garbage Kansas football we’ve seen over the last ten years, and my goodness that’s really saying something.

Fortunately they were able to get a little water on the dumpster fire in the second half. KU got a stop on the Chanticleers’ first drive of the second half, but of course Les Miles had to burn a timeout on the punt because they couldn’t figure out what personnel they should have on the field. Maybe someday Kansas will have an organized coaching staff.

Their first drive of the second half was actually pretty decent. MacVittie showed some wheels and came up with a huge scramble, and Kendrick connected with Parchment for the team’s first touchdown, followed by a 2 point conversion. Unfortunately, because we can’t have nice things, both MacVittie and Pooka Williams were hurt on the drive and aside from one more carry by Pooka, neither played again.

However, the defense came up with their first 3 and out of the game, giving Kansas something resembling a reason for hope. Velton Gardner showed some home run burst and took it to the house from 61 yards out, and suddenly this was a 28-17 game.

Sadly, the first half defense returned and CC was able to steadily move the ball down the field and go up 35-17. On the ensuing drive, Miles Kendrick came up with his best throw of the night on a deep ball to Kwamie Lassister II to get KU into CC territory. Several plays later he would find Lassister again to put up another score. The 2 point conversion was no good for a second straight time, and with just 7:00 remaining and a weak defense, the 35-23 deficit was just too much to overcome in too little time.

The Jayhawks got one glimpse of hope after recovering an onside kick, but the Sun Belt officiating crew manufactured a demonstratively incorrect offside call to take it away. Mission accomplished, guys.

As you can probably tell by reading the beginning of the recap, I was ready to call it for the season at halftime. To the team and coaches’ credit, they turned it around and looked like an OK football team for much of the second half.

However, this was Coastal Carolina. Even KU recruits at a level where being fully dismantled by a Sun Belt squad for a half is unacceptable. They looked totally unprepared and were outcoached in every way. This team may be rebuilding after losing some important players last year, but the extent to which they were dominated in the first half is a complete embarrassment, and our faithful few remaining football fans deserve better.

Brent Dearmon couldn’t find ways to get Pooka the ball. They clearly have no idea what to do about the quarterback position. The defense was getting manhandled by Carolina’s o-line, and pushed back in every pile. No one expected much from this Kansas team, but this program cannot continue to embarrass themselves like this. Aside from a small uptick in recruiting and a few decent performances last October, the Les Miles regime has not looked like any less of a disaster than any of his three most recent predecessors.

It’s not like Miles is going anywhere any time soon, so if this stuff doesn’t improve, it’s going to get harder and harder to justify devoting any time or energy to this perpetual disaster of a program.