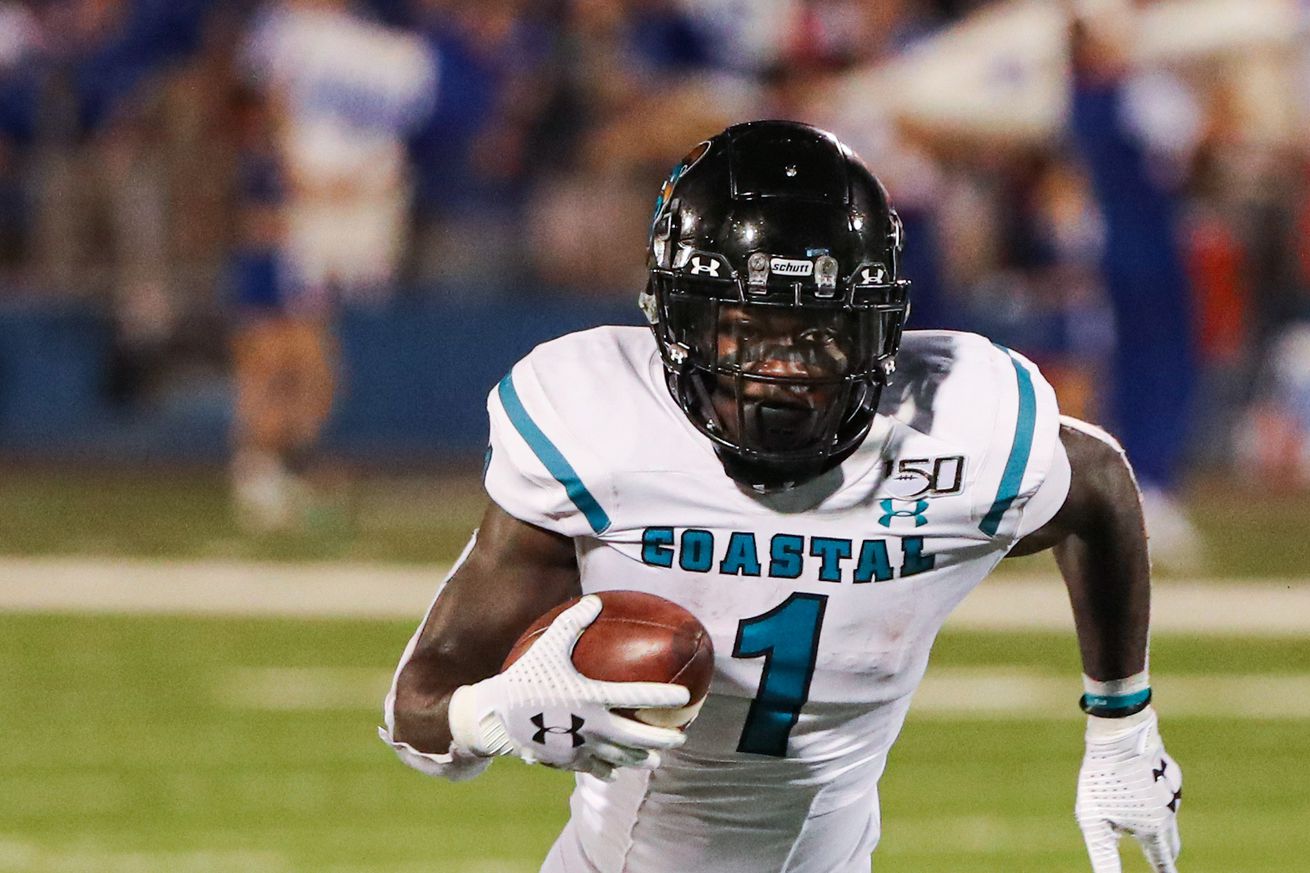 Two mythical birds square off in the heartland.

Kansas opens up the pandemic-altered 2020 season with a home game against new arch-nemesis Coastal Carolina.

Kansas surpassed 500 yards of total offense in 3 games in 2019, something the Jayhawks had not done since the 2007 season.

Pooka Williams is just the second Jayhawk to rush for more than 2,000 yards in his first two seasons (Gale Sayers, 1962-63).

Coastal has only been playing football for 18 years. They are 11-7 in season openers.

Coastal’s 12 points in the win against Kansas last season was the fewest points scored in a win in program history.

Both teams are coming off disappointing seasons where they each felt like they could have had more wins. Coastal Carolina (5-7) lost four games by a touchdown or less, while Kansas (3-9) held fourth quarter leads over Iowa State and Texas, while dropping games to Coastal and West Virginia by a 5 points each.

Les Miles is on record as stating that he is going to let Brent Dearmon run the offense this year. Miles was often criticized at LSU for taking too much control of the offense, and I think we saw some of that last year – a great example were the fourth down calls against Coastal Carolina. It also manifested at times in other matchups.

Kansas is still rebuilding the roster from the failed Weis/Beaty Juco experiments. The Jayhawks aren’t just going to line up and beat teams, especially Big 12 teams, at the line of scrimmage. They have to get playmakers in space, and Brent Dearmon’s offenses are designed to do that. If Les Miles is going to “let him coordinate” as he said, then the Jayhawks stand to put up a lot more than 12 points this time around.

Make no mistake, the offense can’t sputter like it did last year – KU had five games in which the Jayhawks scored 14 points or fewer.

Kansas was -5 in turnovers in last year’s matchup with Coastal (if you include 0-3 on the above-mentioned fourth downs). Overall in 2019, Kansas finished -12 in turnover margin (not including fourth down attempts). That was good for 124th out of 130 teams. The Jayhawks are due a regression to the mean, and in this case, that’s a good thing.

The advanced stats don’t paint a rosy picture for the Jayhawks on Saturday night. S&P+ currently has Coastal Carolina ranked #109 of 130 teams, slightly ahead of #115 Kansas. Still, S&P+ projected a 5-point Kansas loss back in February, giving the Jayhawks just a 38% chance of pulling out the win.

I think there are a couple of things that S&P+ and ESPN aren’t accounting for. One is the Brent Dearmon effect. If Les Miles is indeed “hands off” the offense, Kansas has the playmakers to make things interesting this fall. That starts by beating the pants off of Coastal Carolina.

Secondly, there’s the added incentive of a revenge game. Maybe Coastal feels like they should have won by more last year – they missed a field goal and were just 2-5 in the red zone – but Kansas should have all of the intangibles related to last year’s result.

Gimme that kool-aid. I’ll take the Jayhawks, and I’ll take them big. I want Parchment down the field and Pooka in space. I want Dru Prox and Steven Parker to give the Coastal QB nightmares for the rest of his life. Wave that wheat. I’ll revise my score prediction a bit from last week, but I’m still going big. Kansas 38, Coastal 21.