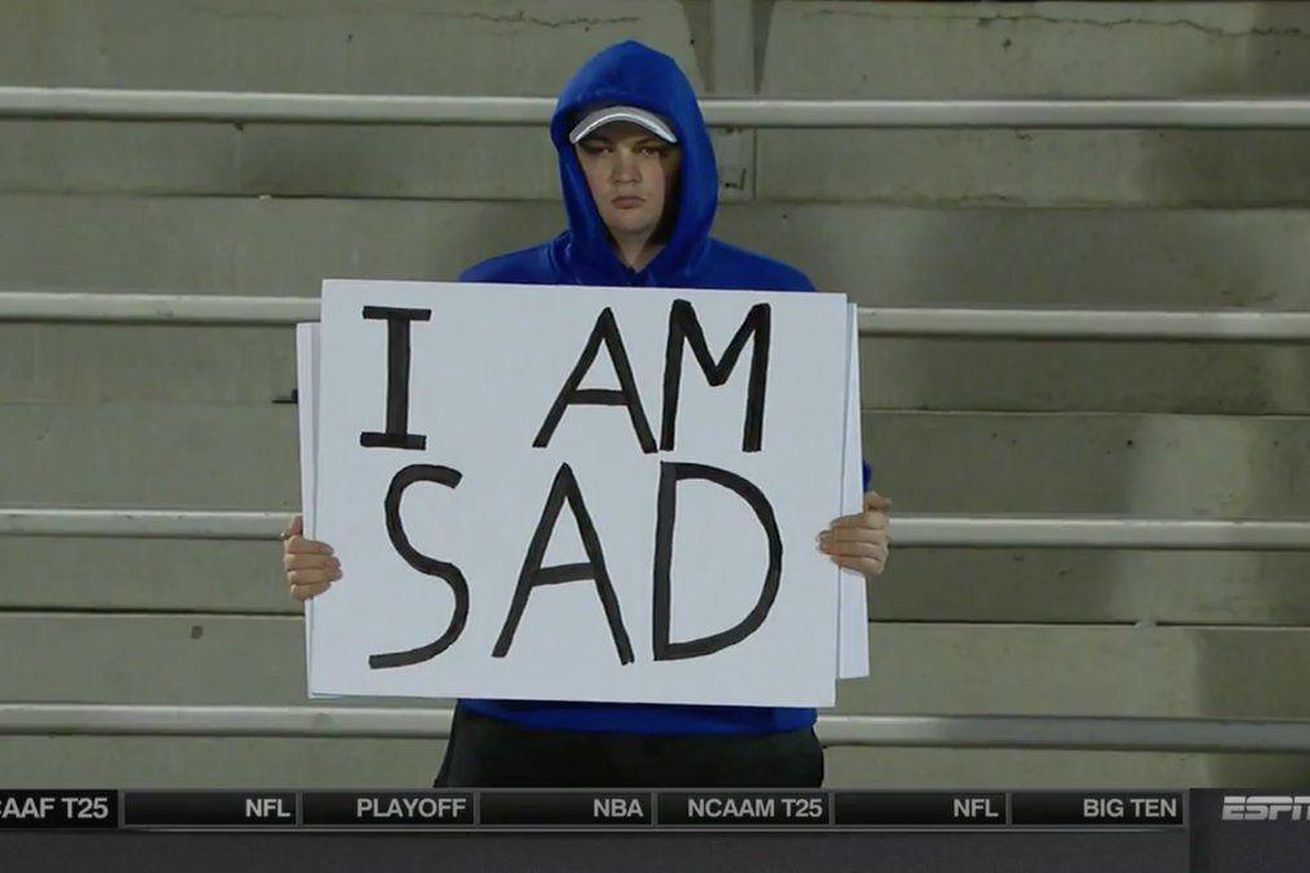 A screengrab from the ESPN coverage of KU’s 2017 loss to Oklahoma.

Kansas laid its second-straight egg in two years against the Chanticleers of Coastal Carolina, who are now 2-7 all-time against the Power-5. Only this time, Kansas was dominated on both sides of ball in what the TV crew called “humiliating” and “embarrassing” fashion.

The halftime score was 28-3, which prompted the TV crew to start bantering about the word “humiliating.” By the time Coastal punched in a late touchdown to make the final margin 38-23, they had moved on to “embarrassing.”

I’m old enough to remember back in 1999, following a 41-13 loss to San Diego State, the crowd booed the Jayhawks off the field. I have to believe that had there been fans in the stands, the same thing would have happened Saturday night – er, Sunday morning. Heck, maybe both.

Fool me once, shame on you. Fool me eight times, shame on me. Isn’t that how the saying goes?

Recently, the YouTube algorithm genie somehow got me hooked onto a YouTube channel called Sci Man Dan. My favorite episodes come on Fridays, where he “debunks” flat-earthers – aka Flat Earth Fridays. A couple of weeks ago, he covered a video from a flat-earther called “I don’t want to be a flat-earther anymore.” The basic premise was, I don’t want people to make fun of me, I don’t want to suffer ridicule, but I have to because the evidence can’t be denied!

Well, I don’t want to be a Kansas football fan anymore. Going to church on Sunday and work on Monday in the fall is brutal. But I have to be, because I’m sure as hell not wearing purple. Ever.

In much the same way that flat-earthers manufacture “evidence” to “prove” the earth is flat, I am guilty of manufacturing optimism for a football program that just can’t get out of its own way. I officially apologize, and shall endeavor to do better in the future.

All of the evidence was there, I just chose to ignore it. I mean, this is a program that can’t even spell the names of the players correctly on their jerseys. Beyond that though, S&P+ and ESPN’s FPI both called for a Coastal win, and even if the Jayhawks had not finished -3 in turnovers, they were still manhandled up front and Coastal most likely wins that game straight up anyway.

Yes, the first two turnovers were pretty fluky. MacVittie’s INT went off both hands of his receiver – that’s a ball a D1 player needs to catch. For the first fumble, yes he was hit hard, but it appeared as if his own teammate’s helmet impacted the ball and knocked it out.

As for the Kendrick interception – well, that’s what happens when you don’t throw the ball down the field. When every pass is short and/or into the flat, defenders start anticipating, and eventually, you get picked off. That’s exactly what happened.

Not that Kansas ever had time to throw the ball down field. It didn’t matter which quarterback was in, they were under heavy pressure within just two or three seconds. Coastal was credited with 3 sacks and 12 TFL on the night. KU failed to register a sack on the night, and had just 2 TFL.

Regardless, the turnovers happened, and Kansas found itself down 21-0 before 20 minutes had elapsed. As mentioned earlier, Kansas was pushed around up front all night long, which shows in the stats – Coastal was 8-14 (57.1%) on third down, and converted their only fourth down attempt. Meanwhile, Kansas was just 4-11 (36.3%), and 2-3 on fourth downs.

And let’s talk third downs for a minute. KU’s average yards-to-gain on third down was 8.25. Coastal’s was 3.6. Kansas faced 8 third down attempts of 7 yards or more. Coastal faced just 3 such attempts – all in the second half after they had built a huge lead.

The Jayhawks were dominated.

KU did try to make a comeback in the second half that was thwarted by the Sun Belt officiating crew, who called a phantom offside after Kansas recovered an onsides kick after closing to 35-23. But you absolutely cannot blame this game on one bad call made by the officiating crew; even had the play stood, the Jayhawks were down 12 points with just 7:00 remaining on the clock, and given the way the game was going in the trenches, it’s still pretty unlikely Kansas would have completed the comeback.

I honestly really liked what I saw out of Thomas MacVittie. The INT was not his fault, he made a couple of impressive throws, he has a huge arm, and he picked up some big first downs with his legs. I couldn’t really tell why there was ever a quarterback controversy – MacVittie should be the man.

Kendrick had some positive moments as well, but I felt like at least a couple of his completions were lucky, in the sense that he threw into traffic and his receiver somehow came down with it.

Kansas looked like a team that was completely unprepared, especially defensively, and that’s on the coaching staff. When Coastal punched them in the face, Kansas just couldn’t get up off the mat. The Jayhawks were continually beat beat up in the trenches all night long.

And what the hell was that first half offense?

The defense looked like they had never seen an option play before. How do you not put a spy on the opposing QB after he rips off a couple of big runs? I’ve never been a football coach, and I never will be. Maybe it’s a lot more complicated than it looks. Or maybe they’re just over thinking it.

Thomas MacVittie started and went 5-9 for 20 yards with the aforementioned INT that was popped up into the air by his receiver. He also rushed (scrambled?) 6 times for 37 yards, a 6.2 ypc average.

MacVittie left the game in the third quarter when he suffered an apparent shoulder injury.

Jalon Daniels saw action in the game as well, on the final drive, completing 1 of 2 passes for 13 yards.

Pooka Williams carried the ball 12 times for 67 yards, a 5.6 ypc average. He was not targeted in the passing game, and had just two carries in the disastrous first quarter.

Pooka also left the game in the third quarter with an undisclosed injury, which Les Miles would not talk about following the game.

Velton Gardner had 81 yards on 11 carries with a touchdown. 61 of those 81 yards came on the touchdown run.

Kwamie Lassiter led KU receivers in yards with 63 on 5 receptions, one for a TD.

Andrew Parchment led KU in receptions with 6, which went for 54 yards and a TD.

Dru Prox led the Jayhawks in tackles with 11.

Jacob Borcila was 1/2 on field goals, hitting from 47 and missing from 53.

Kyle Thompson punted just once, but it was from the plus side of the field (after Kansas crossed midfield) when the Jayhawks were already down 14-0. Obviously that’s not his fault, but I’ll go ahead and shout so the coaches in the back can hear: STOP PUNTING AFTER YOU CROSS MIDFIELD.