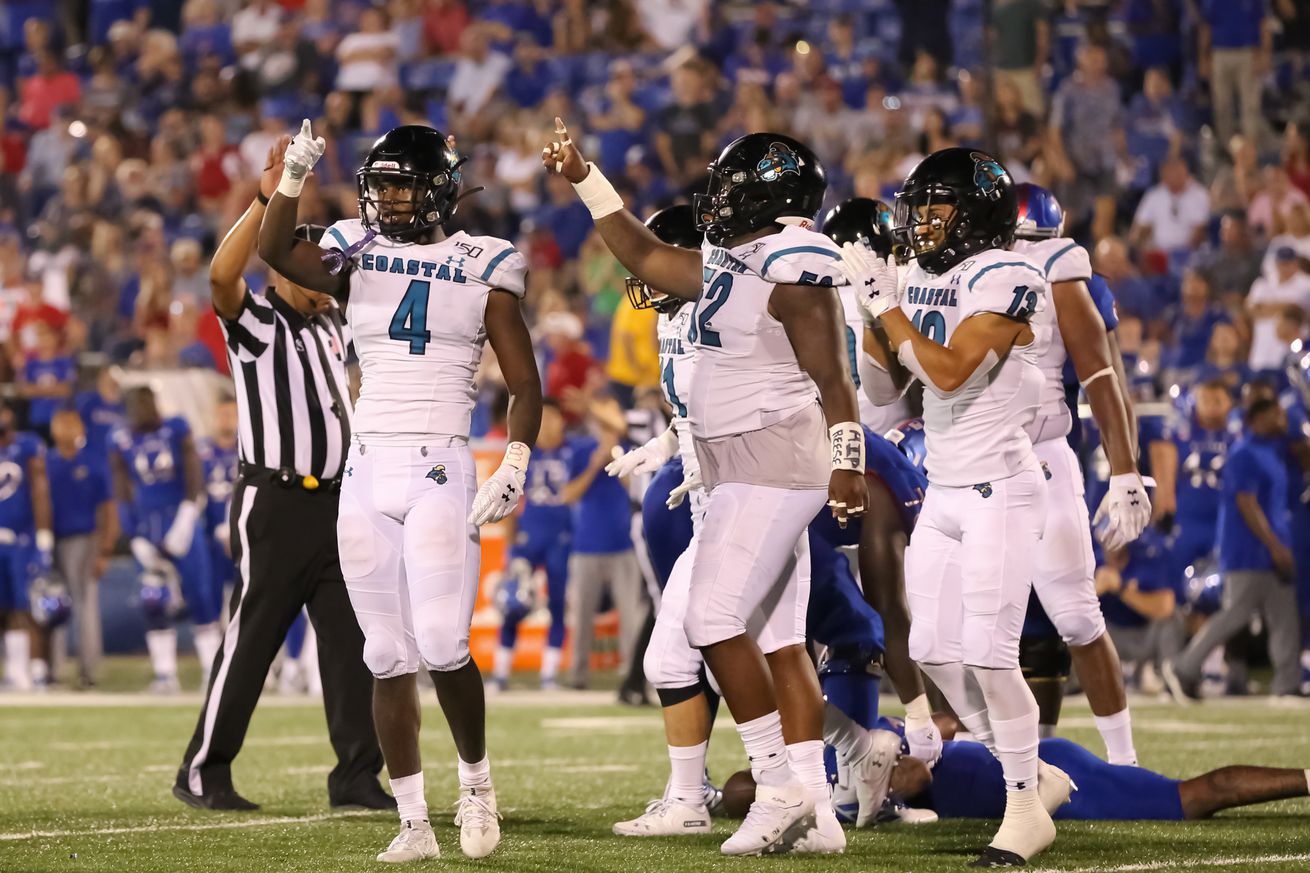 We’re finally on the home stretch of counting down to the start of Kansas football season, which means it’s time for our final preview of the offseason.

Ugh. Last year’s game, the first-ever matchup between these two schools, was a disastrous 12-7 loss for Kansas. You can re-read about it here if you want, but I’m just going to try and move on.

About the CC Offense

Coastal returns 88% of its offensive production from last season, which is a top-5 mark in D1 college football. Basically, if he appeared in the box score last year, you’ll see him again this year. Primary QB Fred Payton is back, as is 1,000-yard rusher Torrance Marable. Jaivon Heiligh and Isaiah Likely combined for 78 receptions last year, and obviously they both return as well. Four seniors who started last year as juniors return along the offensive line.

About the CC Defense

The Chanticleers did see some turnover on defense, returning 62% of their defensive production from last year. That said, Coastal does still return its top-4 tacklers from 2019, but appears to be looking for playmakers at the cornerback position, after going through 2019 with two seniors starters on the edge.

Per updated S&P+ rankings (as of Sept 1), Coastal Carolina is ranked #109 of 130 teams, slight ahead of #115 Kansas. S&P+ projected a 5-point Kansas loss back in February, giving the Jayhawks just a 38% chance of pulling out the win. (I’m not sure what the updated numbers are.)

Last year was a game Kansas never should have lost. The Jayhawks were minus five in turnovers (counting the turnovers on downs), they were way too conservative on offense, Carter Stanley had one of his worst games ever wearing a Kansas jersey, and the spectre of David Beaty still hung over Memorial like a fog.

I’m done hearing and talking about Brent Dearmon. Don’t get me wrong, I’m a huge fan – I absolutely love what I’ve been hearing and reading. But it’s time to show us what you’ve got. If Kansas is gonna surprise a Big 12 team or two this season, they better show that they have the ability to do so by pummeling Coastal freaking Carolina. Open up that offense, Brent. Hang half a hundred on ‘em. Kansas 52, Coastal Carolina 27.