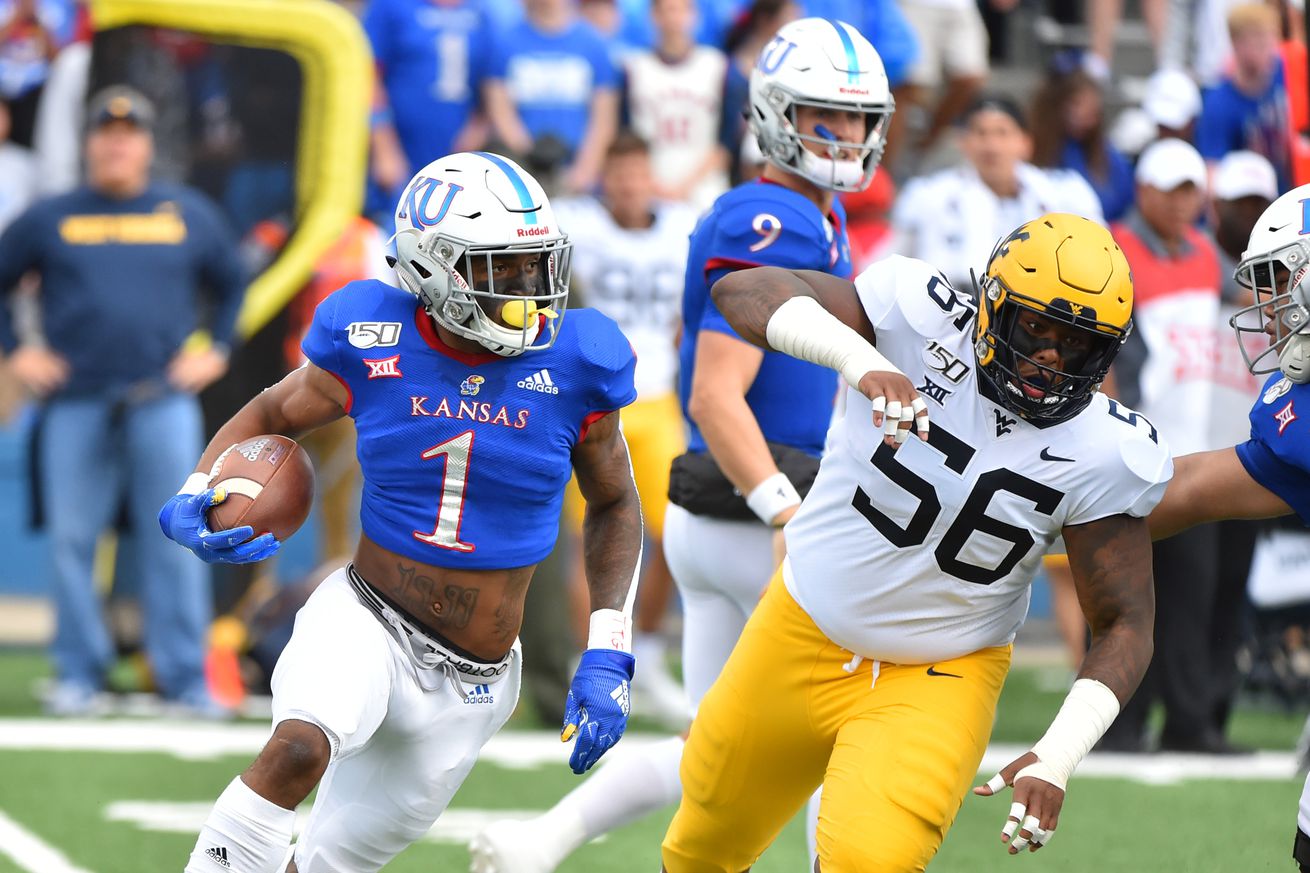 With 8 weeks to go (maybe), we look at KU’s 8th (currently) scheduled opponent in 2020, the Mountaineers of Western Virginia. (PSA – They don’t like being called “Western Virginia.)

Kansas is just 1-7 against West Virginia since the Mountaineers joined the Big 12, surprisingly knocking them off back in 2013 under Charlie Weis. The rest of the matchups had not been competitive at all until last year, a game that KU controlled everywhere except time of possession and the all-important scoreboard.

West Virginia went through a coaching change at same time KU did, with Neal Brown leading the Mountaineers to a 5-7 record in his first season in Morgantown last year.

About the WVU Offense

West Virginia returns 71% of its offensive production from 2019 that failed to top 24 points in each of their last seven games. In fact, WVU only scored 30+ points twice last year – 44 in a win against NC State and 31 in a loss to Texas (#KansasProbs).

Back is quarterback Austin Kendall, who transferred in from Oklahoma and completed 61.5% of his passes last year with a 12/10 TD/INT ratio. However, it should be noted that Jarret Doege started the final three games of 2019 in an attempt to awaken the anemic WVU offense, which didn’t really work, although they did win two of his three starts. So, the quarterback competition between these two in fall camp is definitely one to keep an eye on.

Leddie Brown and Kennedy McKoy split carries out of the backfield last year, and only Leddie Brown returns for 2020. Three of WVU’s top four pass catches from last year return as well, including leading receiver Sam James. And from what I can tell, the Mountaineers lost just two senior starters off of their offensive line.

About the WVU Defense

Defensively, the Mountaineers return 58% of their defensive production from 2019. Safety Sean Mahone, who led the team in tackles last year, is back, as well as second-leading tackler in LB Josh Chandler. Linemen Darius Still and Dante Stills, who combined for 14 sacks last year, return as well.

Per preseason S&P+ projections released back in February, West Virginia is ranked #64 of 130 teams, good for 9th in the Big 12, well ahead of #113 Kansas.

As I’ve already mentioned, this is a game that Kansas probably should have won last year. There were a couple of questionable (at best) calls that didn’t go KU’s way, but the Jayhawks had offensive issues in the first half that put them on the back foot to begin with.

West Virginia obviously has offensive issues of its own, including an apparent quarterback controversy looming over this offseason. By the numbers, though, the Mountaineers are still well ahead of the Jayhawks. Plus, KU’s conference road struggles are well documented, as Kansas has now dropped 49 consecutive true road games (52 if you include neutral sites).

So forgive me if I say yet again that “seeing is believing.” Although Kansas nearly got them last year and this looks like KU’s best chance at a Big 12 road win this year, I’m not ready to predict it… yet. Both teams should move up and down the field pretty well, so it appears to be a game that could go either way. Still, I’ll take West Virginia 37, Kansas 33.